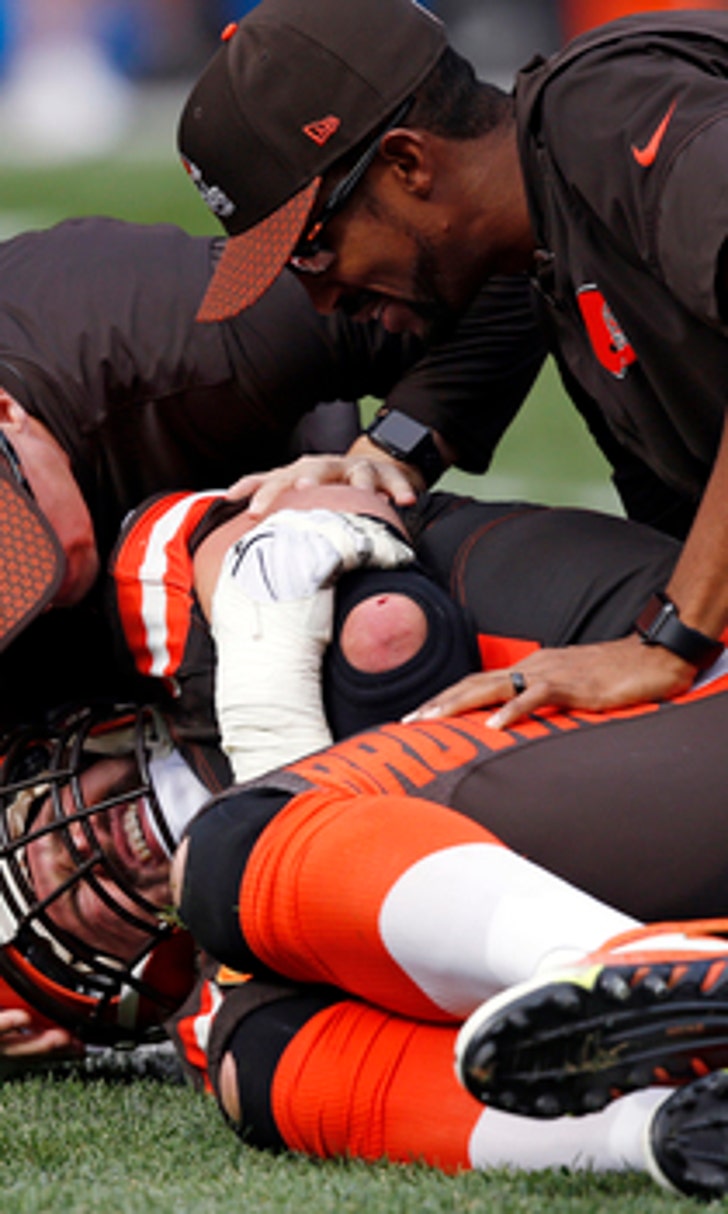 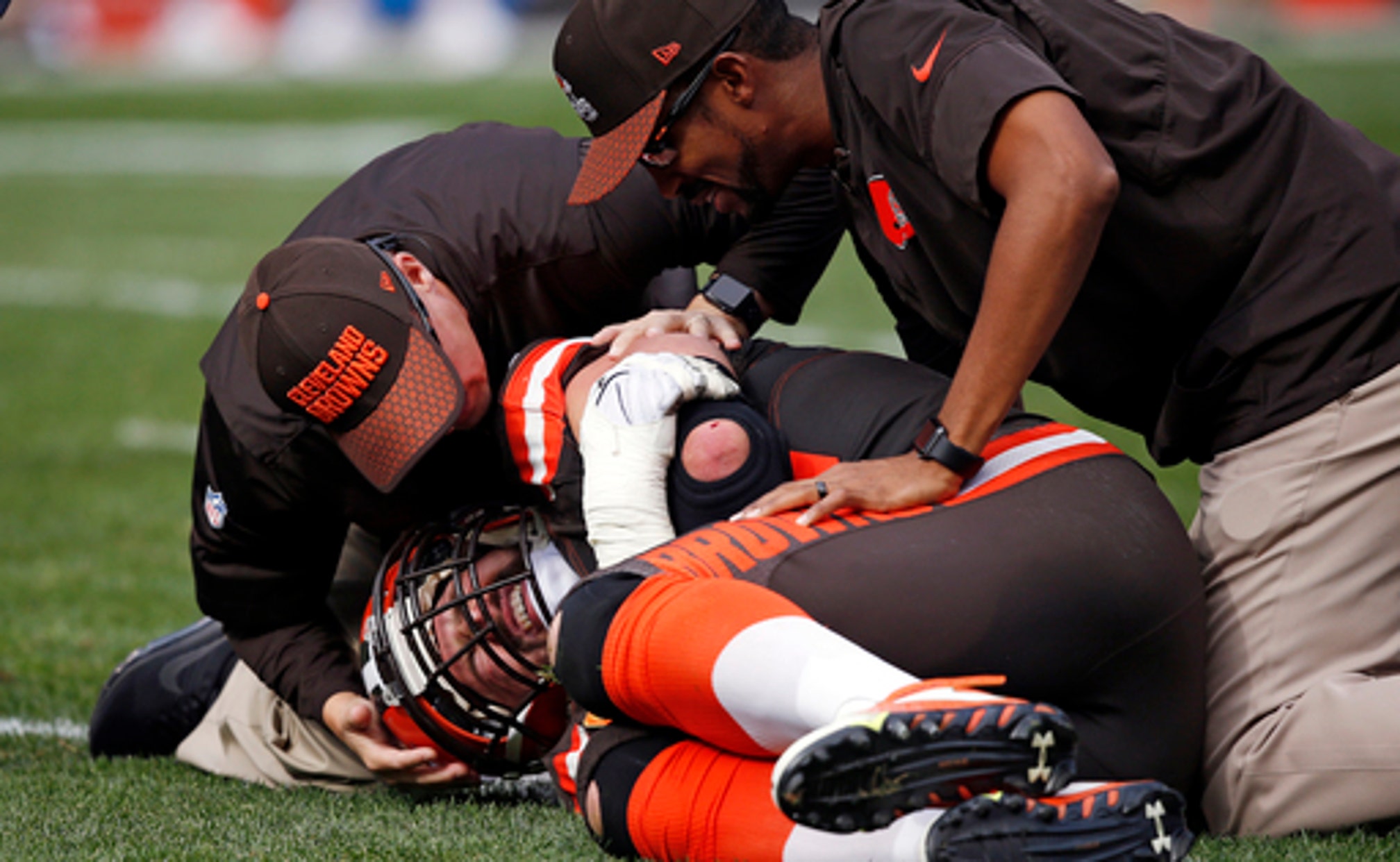 CLEVELAND (AP) As Joe Thomas crashed to his knees and grabbed his left arm, instinctively pulling his injured limb tightly to his body while screaming in pain, an audible gasp flowed through the crowd inside FirstEnergy Stadium.

This couldn't be happening. Not to Thomas. Not to Cleveland's unbreakable iron man left tackle.

High above the field in the radio broadcast booth, Doug Dieken, the team's venerable color commentator who made 194 consecutive starts at left tackle and also wore No. 73 for the Browns uttered words that reverberated across the NFL.

''Oh, no,'' Dieken said, his voice a jumble of shock and dread while watching his close friend.

While blocking on a routine running play he had completed thousands of times without incident or injury, Thomas tore a tendon, ending his season and pushing his career to unexpected crossroads.

Without warning, an extraordinary run of durability forged by good luck, hard work and other-worldly toughness - it drew comparisons this week to other notable streaks like Cal Ripken playing in 2,632 consecutive games and Joe DiMaggio hitting safely in 56 straight - was over.

Thomas had never missed a snap in his career. When the enormously popular 6-foot-6, 312-pounder trotted to the sideline as Cleveland's offense continued its drive, he was not part of the action for the first time in 10,363 consecutive plays, a stretch that almost defies logic.

Boselli wasn't alone as players, coaches and fans around the league reflected on Thomas' accomplishment, which has gone under appreciated because he's played on so many losing teams with Cleveland. In an innately violent sport, where collisions and injuries rule, Thomas has been the exception - the outlier.

''So many things are out of your control, guys getting rolled up from behind, just the crazy stuff that can happen, let alone just the wear and tear on your body,'' Boselli said. ''He's remarkable. He's been a great player and I hated to see him get hurt. But it's pretty special what he's done.''

While the Browns will adopt the next-man-up philosophy, plugging second-year lineman Spencer Drango into Thomas' spot this week against Minnesota in London, coach Hue Jackson is realistic about what's missing.

''We all know those shoes won't be filled,'' he said. ''Let's just be honest, that is Joe Thomas we are talking about.''

To truly grasp how Thomas, 32, suited up each week and made 167 consecutive starts, a look behind the curtain is necessary.

He played through injuries, including a torn knee ligament, several knee strains and two high ankle sprains. Thomas also trained smartly, never pushing too hard while incorporating stretching exercises that made him more pliable than many peers.

His work ethic, dedication to his craft and selflessness endeared Thomas to teammates, some of whom have moved on but look back on their time with him as significant in their own development.

''He's like an all-timer,'' said Jets quarterback Josh McCown, a 15-year veteran who spent two seasons in Cleveland. ''I've played this game for a long time with a lot of teams and a lot of teammates, and he's got to be one of my all-time favorites. He's a good man, a high-character person, and he works his tail off and shares his knowledge with others, serves his team to the utmost, and he's great at his job. Not good, but great. He's a special dude.

''Here's what it is: It's cool when you, as a left tackle and a guy who doesn't touch the football, you can influence other positions and the rest of the team to the level that Joe does. He's a rare dude and there are not a lot of guys like Joe.''

Dieken's one of them, and in a coincidental and eerie twist, he was hospitalized this week just days after Thomas was injured. Dieken did not accompany the Browns on their trip to London and will miss just his second broadcast since 1985.

In Cleveland, Thomas is more than just an excellent football player.

He represents this lunch-pail, work hard/play hard city perhaps better than any athlete before him. The kid from Wisconsin who took the lessons his folks taught him to heart. The guy who went fishing with his dad on draft day rather than walking onto the stage at New York's Radio City Music Hall.

And while the Browns have basically stunk for his entire tenure, Thomas has shined.

McCown marvels at Thomas' steadiness from one losing season to the next. Thomas has played for six coaches, blocked for 20 different quarterbacks and been on teams with a combined 48-119 record. And while the Browns have never been to the postseason - and don't appear as if they'll be contending anytime soon - with Thomas, his level of play hasn't wavered.

''I know there were a lot of days where he didn't feel good. Especially these last few years, what he had to do to get himself ready, it was a round-the-clock thing. I know that they appreciate him in Cleveland and they should. He's a stud.''

If Cleveland had a football Mount Rushmore, Thomas would be immortalized alongside Paul Brown, Jim Brown and Otto Graham. One of just five players to make the Pro Bowl in each of his first 10 seasons, he'll one day be get a bronze bust in Canton.

Before he underwent surgery, Thomas, who is facing at least six months of rehab, said he would wait until the offseason to consider whether to keep playing. He'll talk it over with his wife, Annie, and do what's best for his family.

It's hard not to imagine a comeback, or Thomas ending his career on a down note.

Whatever Thomas decides, Boselli has one wish.

''What I hope for Joe is that he gets to determine when it's over on his own,'' he said. ''I didn't get to do that. My left shoulder decided it wasn't going to work again and that was it. Selfishly, I hope I get to look at Joe Thomas and say, `Good for him, he got to leave when he wanted to.'''