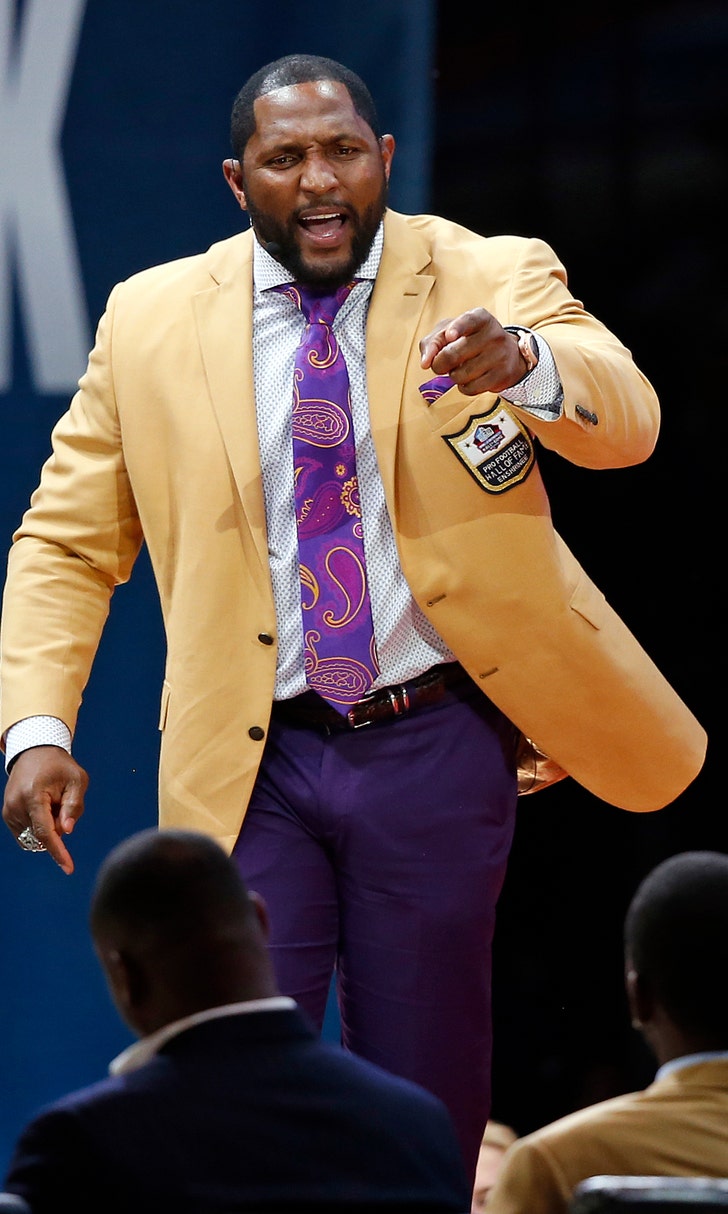 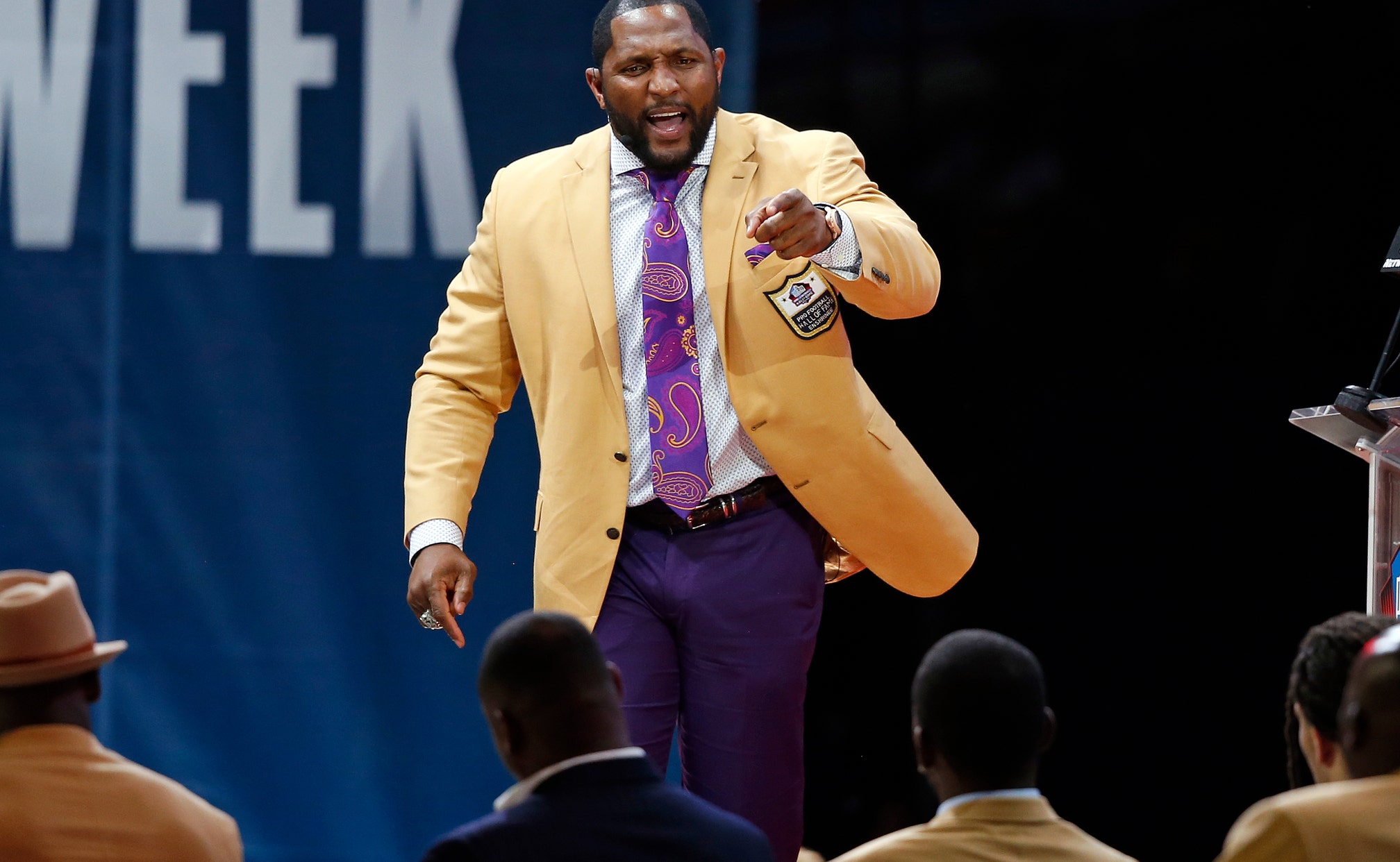 Hall of Fame speeches get political in Canton, Chattanooga

CANTON, Ohio (AP) — Just as the demonstrations of players during the national anthem have become a means of expression for NFL players, the stage at the Hall of Fame inductions often turns into a political platform. It certainly did Saturday night.

Ray Lewis did so with his words, and Randy Moss with his tie.

There even were political tones with a different target 600 miles away during Terrell Owens' speech at his personal celebration of entering the pro football shrine.

Lewis was a man on the prowl as he concluded proceedings in Canton, just as he was on the field as the greatest linebacker of his generation. He eschewed the lectern, wearing a cordless microphone for his 33-minute oratory focusing on "hope, faith and love," on "family, honor, legacy."

And then on the division in this country.

"How do we react to challenges in our country right now? Think about this," he added, looking around at his fellow Hall of Famers. "We can go from being legends to building a legacy bigger than football, bigger than sports. I want us to work together to really take on these challenges, to look at our goals and what unites us. Surely, there is something."

While he never specifically mentioned anyone or any political party, Lewis delivered a message about unity that stretched far beyond the football field. It echoed the powerful speeches in recent years by LaDainian Tomlinson, Tony Dungy and Cris Carter.

"How about stopping our kids from dying in schools?" Lewis asked. "Can we please put prayer back in schools? Please. How about protecting our children from a terrifying life of being sex trafficked? How about helping our neighbors that can't afford their medicine?

"How can we do this? How can we come together? The answer is simple. The answer is love. ... The love that sacrifices and is defined by action taken for others. The actions of stepping up and being a leader. It's no different than we all did to get here. We rose to the challenge, week after week for the love of the game and for the love of our team. That love just doesn't go away when we retire. It's still in us burning to be used."

Yes, the loudest cheers during Lewis' time onstage came when he mentioned Baltimore or paid tribute to former teammates and coaches. But Lewis admitted to being hopeful that the words at the end of his speech would have a lasting impact.

Instead of politicizing his speech, Moss wore a tie he said bore the names of 13 black men and women who have been killed by police in recent years. Late Saturday night, he explained his reasoning for wearing it to NFL Network.

"You see the names on my tie. Being able to use a big platform like this here at the Hall of Fame ... what I wanted to be able to express with my tie is to let these families know that they're not alone. I'm not here voicing; but by these names on my tie, at a big platform — it's the Pro Football Hall of Fame — there's a lot of stuff going on in our country. I just wanted to let these family members know that they're not alone."

Owens was alone, not among Hall of Famers, after making the unprecedented decision to skip the Canton inductions. He gave a bunch of reasons in Chattanooga, ranging from the process by which people get voted in to his being badmouthed unfairly — one Hall of Famer has called Owens "a cancer" — to being a groundbreaker for future hall candidates.

"It's not because of how many times it took for me to be voted to the hall," said Owens, who got in on his third try — the same as Joe Namath, Willie Lanier and Fran Tarkenton, for example. "It's about the mere fact that the sports writers are not in alignment with the mission and core values of the Hall of Fame.

"These writers disregarded the system, the criteria and bylaws in which guys are inducted, and ultimately the true meaning of the Hall of Fame and what it represents. I wanted to take a stand so the next guy coming after me will not have to go through what I and others have gone through. Whether it's three years or 45 years, you should get what you rightfully earned."

One thing Owens apparently earned is the enmity of many men who own gold jackets. While they preferred not to speak on the record about his absence, a significant number in Canton said Owens might never be welcomed into their fraternity.

Twitter Fingers: Rumbling and Stumbling
Daniel Jones' near-90 yard touchdown run quickly went from a glorious highlight to a Twitter-user's dream.
35 mins ago

As Odell's World Turns
Odell Beckham Jr. has never been one to shy away from the spotlight. And this week has been no different.
5 hours ago

Stakes still high for struggling Giants, Eagles
The Giants and Eagles are woeful, but one can take a big step in the NFC East race Thursday. FOX Bet previews how to wager on this one.
7 hours ago

Rest With These Defenses
As he handicaps his best bets for Week 7, Geoff Schwartz finds value in backing a couple of the NFL's top defenses.
7 hours ago

The Wright Tiers
The 'Herd Hierarchy' finally has some competition. Here are Nick Wright's NFL tiers heading into Week 7.
8 hours ago
those were the latest stories
Want to see more?
View All Stories
Fox Sports™ and © 2020 Fox Media LLC and Fox Sports Interactive Media, LLC. All rights reserved. Use of this website (including any and all parts and components) constitutes your acceptance of these Terms of Use and Updated Privacy Policy. Advertising Choices. Do Not Sell my Personal Info