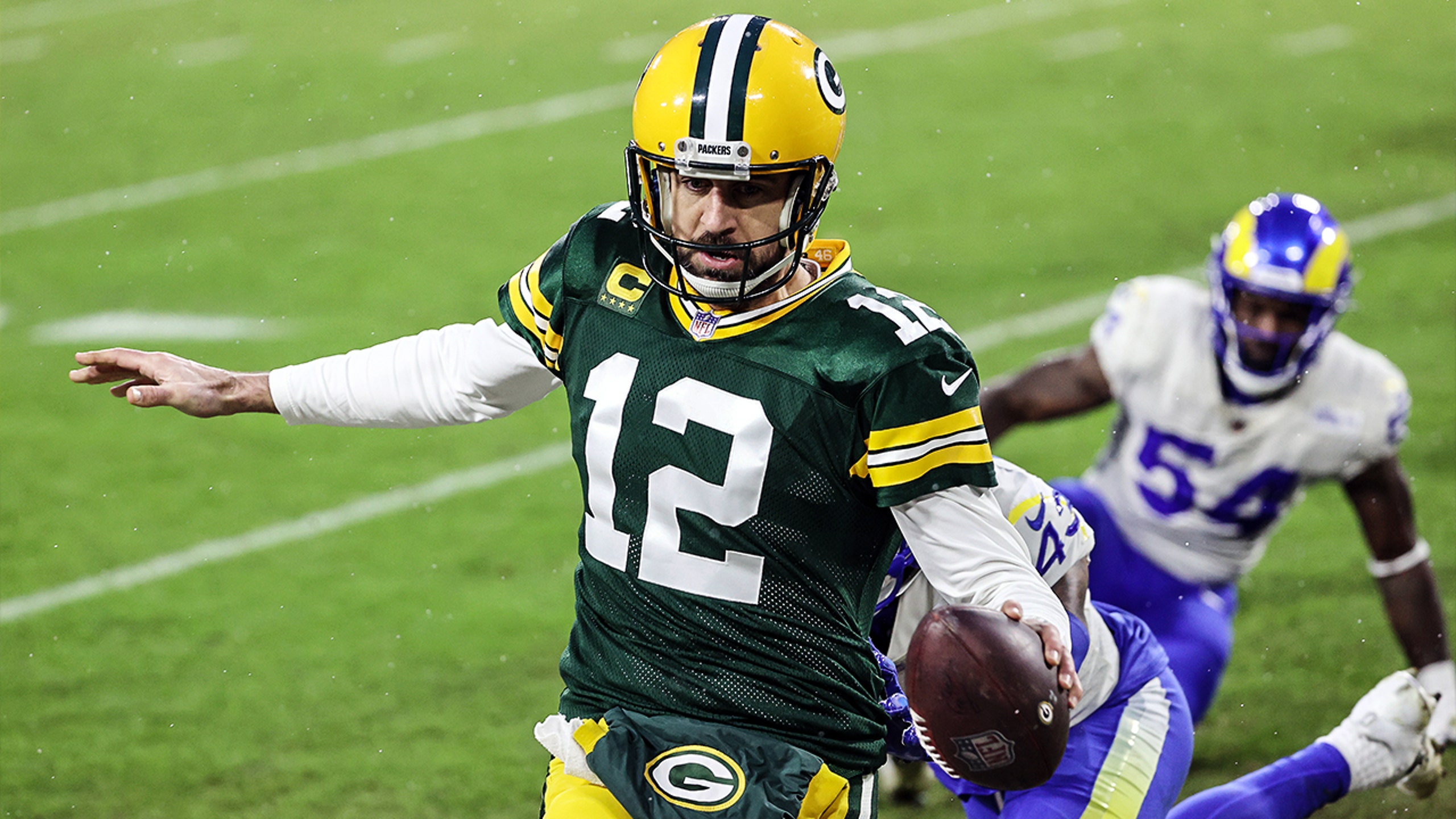 Aaron Rodgers and the Green Bay Packers watched their offense click up and down the field on Saturday in a 32-18 win over the Los Angeles Rams and their dominant defense – one that didn't look as daunting as the day progressed.

Rodgers, the favorite to win the NFL regular-season MVP, was once again in his bag on Saturday, picking apart the Rams' defense from the second quarter on, after the game was tied 3-3 entering the second frame.

L.A. came into the playoffs as the No. 1-rated defense in the league, and on wild-card weekend, the Rams went to Seattle and held the Seahawks to 20 points. Russell Wilson completed just 11 of 27 passes for 174 yards, and he was sacked five times by Aaron Donald & Co.

However, the Rams didn't find nearly the same success against Rodgers at Lambeau Field, as the future Hall of Famer completed 23 of 36 passes for 296 yards and two touchdowns, finishing with a passer rating of 108.1.

The versatile Rodgers also tacked on an impressive rushing touchdown to boot.

Including the regular season, Green Bay has won seven in a row and nine of its past 10, and during the win streak, the Packers have averaged 33.3 points and 397 total yards per game.

Rodgers has thrown 21 touchdowns and one interception in his past seven games.

Saturday turned out to be a frustrating day for the Rams, who didn't play poorly but couldn't match Rodgers' excellence.

Jared Goff completed 21 of 27 passes for 174 yards and a score, and rookie standout Cam Akers rushed the ball 18 times for 90 yards and a touchdown.

After Green Bay opened the second half with a touchdown, stretching its lead to 25-10, the Rams responded late in the quarter on a 7-yard touchdown run from Akers, cutting the lead to 25-18 heading into the fourth quarter.

But along with Rodgers, it was the Green Bay defense that came up big down the stretch, holding the Rams scoreless in the fourth quarter while Rodgers connected with Allen Lazard for a 58-yard score with less than seven minutes to go.

On the day, the Packers sacked Goff four times for a loss of 26 yards, and Rodgers was left mostly untouched and didn't fall victim to a single sack.

Next up for the Packers is a matchup with the winner of Sunday's game between the New Orleans Saints and the Tampa Bay Buccaneers, which means Rodgers will face off with another future Hall of Fame quarterback regardless of that game's outcome.

The Packers faced both the Saints and Bucs this season. In Week 3, Green Bay earned a 37-30 win in New Orleans, and in Week 6, the Packers got plastered in Tampa Bay 38-10.

Unlike last year, the NFC title game will take place in Green Bay, where the Packers allowed a select few fans to attend Saturday's game, much to the delight of Rodgers.

As "The Brow" warned just a few short weeks ago, good luck to whomever has to visit Rodgers-land next.

The football world will have its answer come Sunday.

Wilson's Short List
Colin Cowherd broke down the best fits for Russell Wilson based on the preferred destinations of the superstar quarterback.
6 hours ago