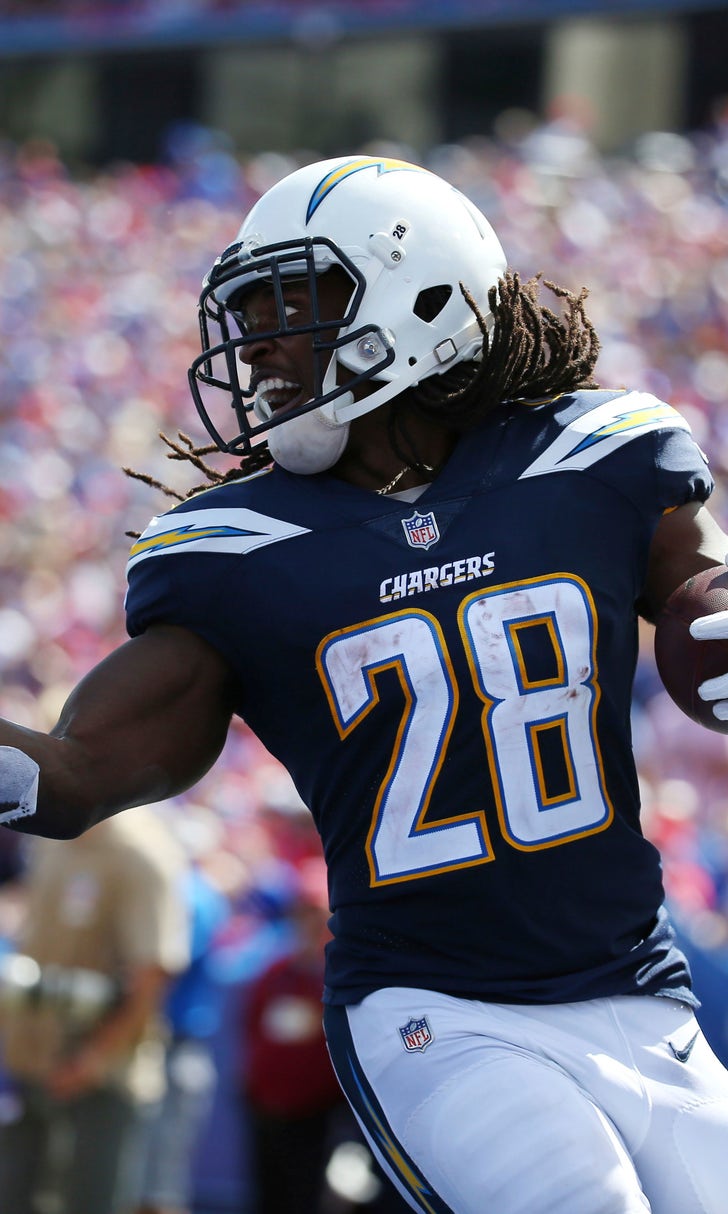 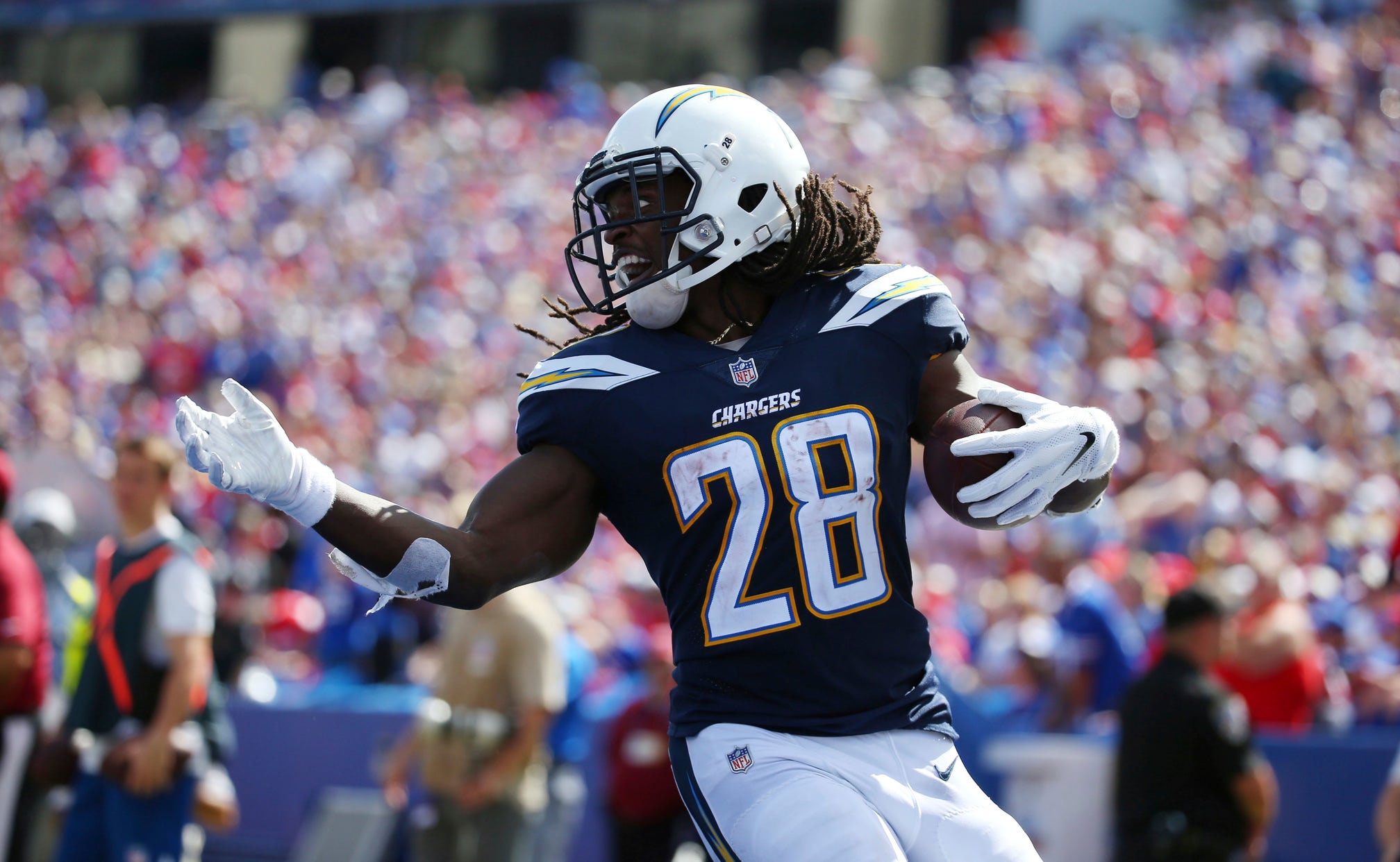 ORCHARD PARK, N.Y. (AP) — Los Angeles Chargers running back Melvin Gordon isn't concerned about an injury that sidelined him for much of the fourth quarter against the Buffalo Bills on Sunday.

"Nah, it's just a little upper body, but I'll be straight," Gordon said.

Whatever pain there might have been was offset by Gordon matching a career high by scoring three touchdowns, and the Chargers holding off a late Bills comeback attempt to secure a 31-20 win.

"It felt good because that just showed us what type of offense we can be," said Gordon, who left with just over 11 minutes remaining. "It's good to have confirmation, so we've just got to keep that going."

A week after putting up 541 yards but lacking finish in a season-opening 38-28 loss to Kansas City, the Chargers were less productive but more efficient. Gordon scored on three consecutive drives in helping the Chargers build a 28-3 lead with 1:55 left in the second quarter.

The Bills, meanwhile, continued to show signs of unraveling even though rookie quarterback Josh Allen provided the offense some semblance of a spark in his first career start, and a week after a season-opening 47-3 meltdown at Baltimore.

Veteran cornerback Vontae Davis created a significant stir by leaving the team at halftime, coach Sean McDermott said. Running back LeSean McCoy did not return and was still experiencing pain in the locker room because of a rib injury. And McDermott revealed he took over the defensive play-calling from coordinator Leslie Frazier to start the second half.

On Davis, McDermott said: "Pulled himself out of the game. He communicated to us that he was done."

"I think the only thing to say is he's where he needs to be right now," tackle Kyle Williams said.

Asked where that might be, Williams responded: "That's not here point blank and simple."

"I don't have nothing to say about Vontae so I'll give him a little bit more respect than he showed us today as far as quitting on us in the middle of the game," Alexander said. "Never seen it, ever. Pop Warner. High school. College. Pros."

Davis was credited with one tackle. He's a 10-year veteran who signed a one-year contract in free agency in March.

The Bills provided Davis a chance to re-start his career after a dispute with former Colts coach Chuck Pagano led to Indianapolis cutting him in November.

Davis made his Bills' debut against the Chargers after being inactive against Baltimore last week.

A message left with Davis' agent, Todd France, was not returned.

The Bills defense wilted in the first half in allowing the Chargers 17 first downs and 284 yards.

Chargers quarterback Philip Rivers finished 23 of 27 for 256 yards and three touchdowns, including a 10-yarder to Mike Williams , 5½ minutes in.

The Chargers defense did their part in limiting the Bills to 110 yards and two field goals in the first half.

Melvin Ingram III had 1½ of the Chargers' five sacks on a defense that was playing without Joey Bosa (foot) and Corey Liuget (suspension).

Allen finished 18 of 33 for 245 yards with a 3-yard touchdown pass to Kelvin Benjamin with 38 seconds remaining, and two interceptions.

It was a modestly better showing at quarterback a week after Nathan Peterman was yanked after completing 5 of 18 attempts for 24 yards, with two interceptions, and overseeing an offense that managed just one first down over 10 series.

McCoy was shaken up late in the third quarter when he was tackled from behind and had Buffalo center Ryan Groy fall down on him. Groy landed heavily on the left side of McCoy's chest as he was on the ground.

McCoy returned and had a 3-yard run on the final snap of the third quarter, before missing the remainder of the game.

The Chargers won their fourth straight meeting against the Bills, and haven't trailed Buffalo since a 23-14 loss on Oct. 19, 2008.

It took nearly 95 minutes of game time for the Bills to finally find the end zone. The drought finally ended on Ivory's 1-yard plunge with 11:06 left in the third quarter. Buffalo was the only team not to score a touchdown in Week 1.

Chargers: Receiver Travis Benjamin did not play because of a foot injury.

Bills: RB Taiwan Jones was being evaluated for a head injury after he was tackled in Buffalo's end zone after his helmet came off while recovering a fumbled punt midway through the fourth quarter. CB Philip Gaines hurt his right elbow while tackling Gordon.

Chargers offensive tackle Russell Okung stood 3 yards in from the sideline with his right arm raised. No other players appeared to protest during the anthem.