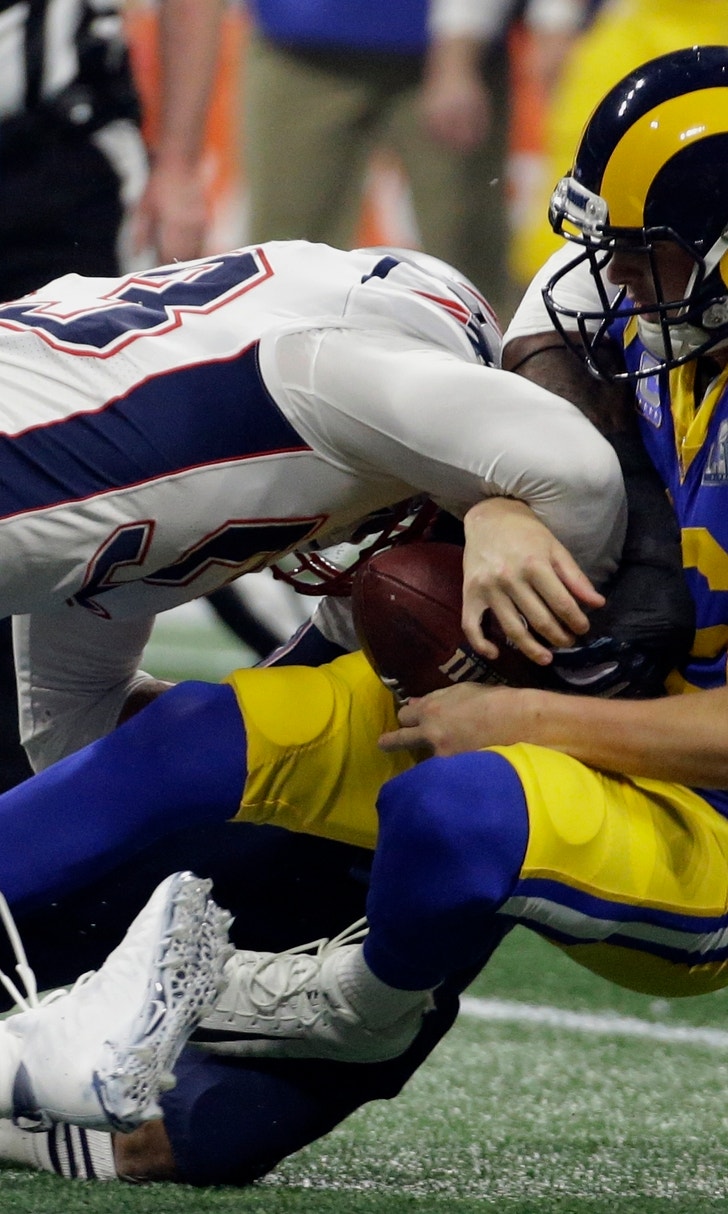 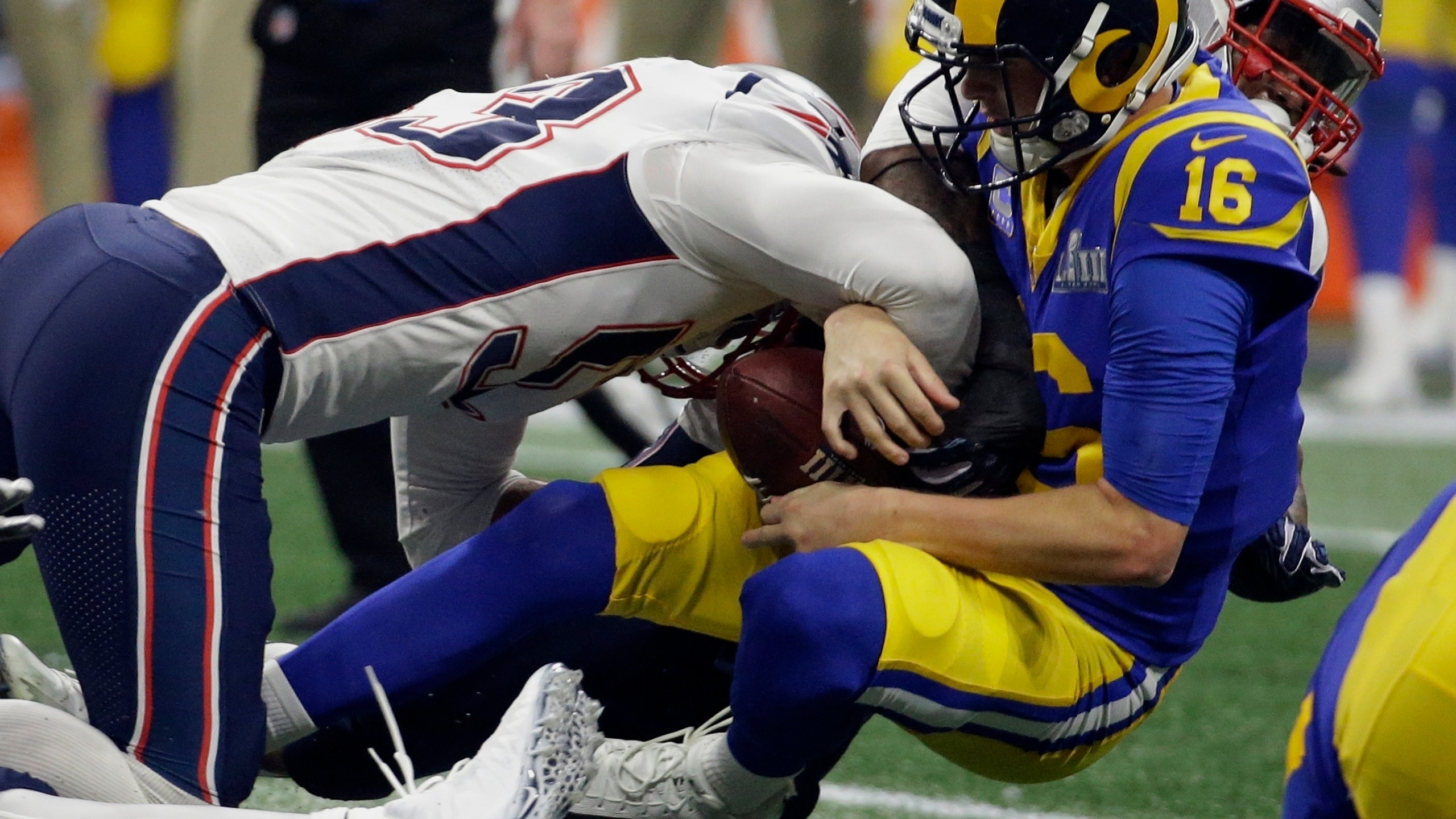 ATLANTA (AP) — Jared Goff trudged to the Los Angeles Rams' bench, his face betraying confusion and despair while the Patriots celebrated their interception behind him.

Sean McVay left the sideline and leaned into his ear. The coach didn't say much, but he encouraged his quarterback to learn from a disastrous night in the Super Bowl.

McVay and Goff are likely to be together for many more years, and they hope they'll remember their embarrassing 13-3 loss Sunday as a springboard to the future, not the crushing flop that it felt like immediately afterward.

Goff went 19 of 38 for 229 yards with a key fourth-quarter interception , yet even those pedestrian numbers don't reflect his full array of overlooked receivers , inaccurate throws and inability to adjust to the Patriots' defense.

"It's the toughest loss I ever had," Goff said. "It kills. It's terrible. It's a game I wish I would have played better. I wish I could have a million plays back."

Goff played a large role in the Rams' defeat, yet almost nothing went right for a team that has been frequently brilliant with the ball in its hands.

Los Angeles has led the league in points per game over the past two seasons, yet the Rams became just the second team in NFL history to fail to score a touchdown in the Super Bowl.

Casual football fans getting their first looks at the Rams at a Super Bowl party probably had no idea how LA got to Atlanta after watching this tentative, inconsistent performance. All of the Rams' recent success came to a weird anticlimax at Mercedes-Benz Stadium with their lowest-scoring performance in 36 games under the 33-year-old head coach.

"I'm pretty numb right now, but definitely I got outcoached," McVay said. "I didn't do nearly a good enough job for our football team. ... This one is going to stick with you. It just stings in your gut."

Though Goff's teammates and coaches refused to blame him, Los Angeles' 24-year-old quarterback had one of the rougher performances in Super Bowl history. Along with his 19 incompletions, he was sacked four times, committed a key false start in the fourth quarter and finished with a 57.9 passer rating.

The Rams all seemed to know exactly what Bill Belichick had done against them defensively. The Pats showed deceptive fronts before the snap, and they frequently retreated into zone pass defenses that forced Goff to find open receivers in a confusing coverage.

Although McVay strenuously blamed his play-calling for putting his players in untenable positions, Goff realized he needed to make more consistent throws and better decisions at the line of scrimmage. Everything was capped by his underthrown pick near the New England end zone, crushing the Rams' hopes for a tying touchdown with 4:17 to play.

Goff has grown from a shaky No. 1 pick into a two-time Pro Bowl selection under McVay, and his best games have been outstanding. But his lows are frequently disheartening — and this game appeared to be among his worst.

Goff had only nine completions in the first three quarters before getting 10 more in the fourth while the Rams' rally fell short.

"We were moving the ball well at times, but we just couldn't get that one play," Goff said. "We know what type of offense we have, and to not be able to show that, it's tough."

The Rams' first eight drives in the Super Bowl ended in punts and resulted in only 72 net yards. But with its defense playing brilliantly, Los Angeles still could have taken the lead late in the third quarter when Brandin Cooks broke wide open on a post route.

Instead, he stood waving in the end zone while Goff saw him belatedly and uncorked a throw that took far too long to get there, allowing New England to knock it down.

"I was surprised he was that wide open," Goff said. "I tried to get it to him as quickly as I could. It was too late."

Goff was in the midst of his best drive right before his interception. He hit Josh Reynolds in perfect stride for an 11-yard gain and a first down with just over five minutes left, and he found Robert Woods with another beautiful long pass on the next snap.

But under pressure from blitzing Duron Harmon, Goff wound up and flung a high pass in the general direction of Cooks. The ball was underthrown, and Cooks lost a fight for the ball with Stephon Gilmore, who picked it off.

Just like everyone in the Rams' locker room, Cooks took the blame on himself.

"I'm great enough to make that play," Cooks said. "I've still got to make it, no matter what."

What Is Rams vs. Packers? An Elite Clash
He'll soon fill in for Alex Trebek (no, really). First, Aaron Rodgers and the Packers must face down the NFL's top defense.
January 15
those were the latest stories
Want to see more?
View All Stories
Fox Sports™ and © 2021 Fox Media LLC and Fox Sports Interactive Media, LLC. All rights reserved. Use of this website (including any and all parts and components) constitutes your acceptance of these Terms of Use and Updated Privacy Policy. Advertising Choices. Do Not Sell my Personal Info