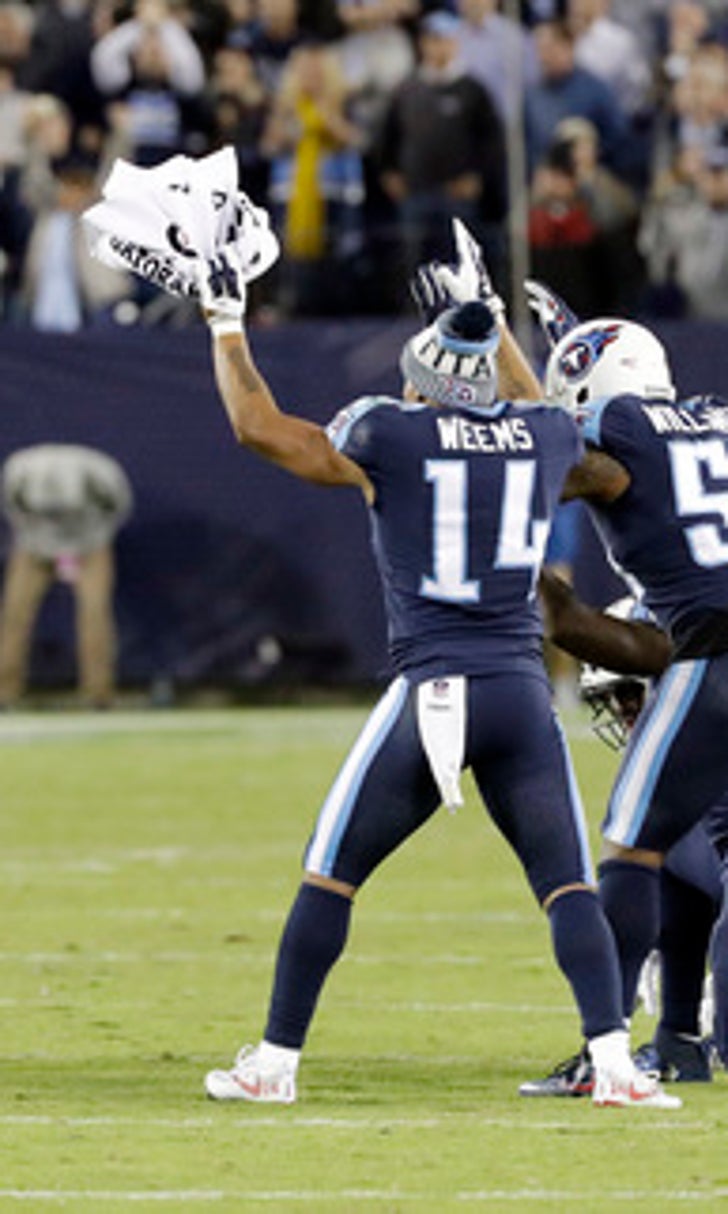 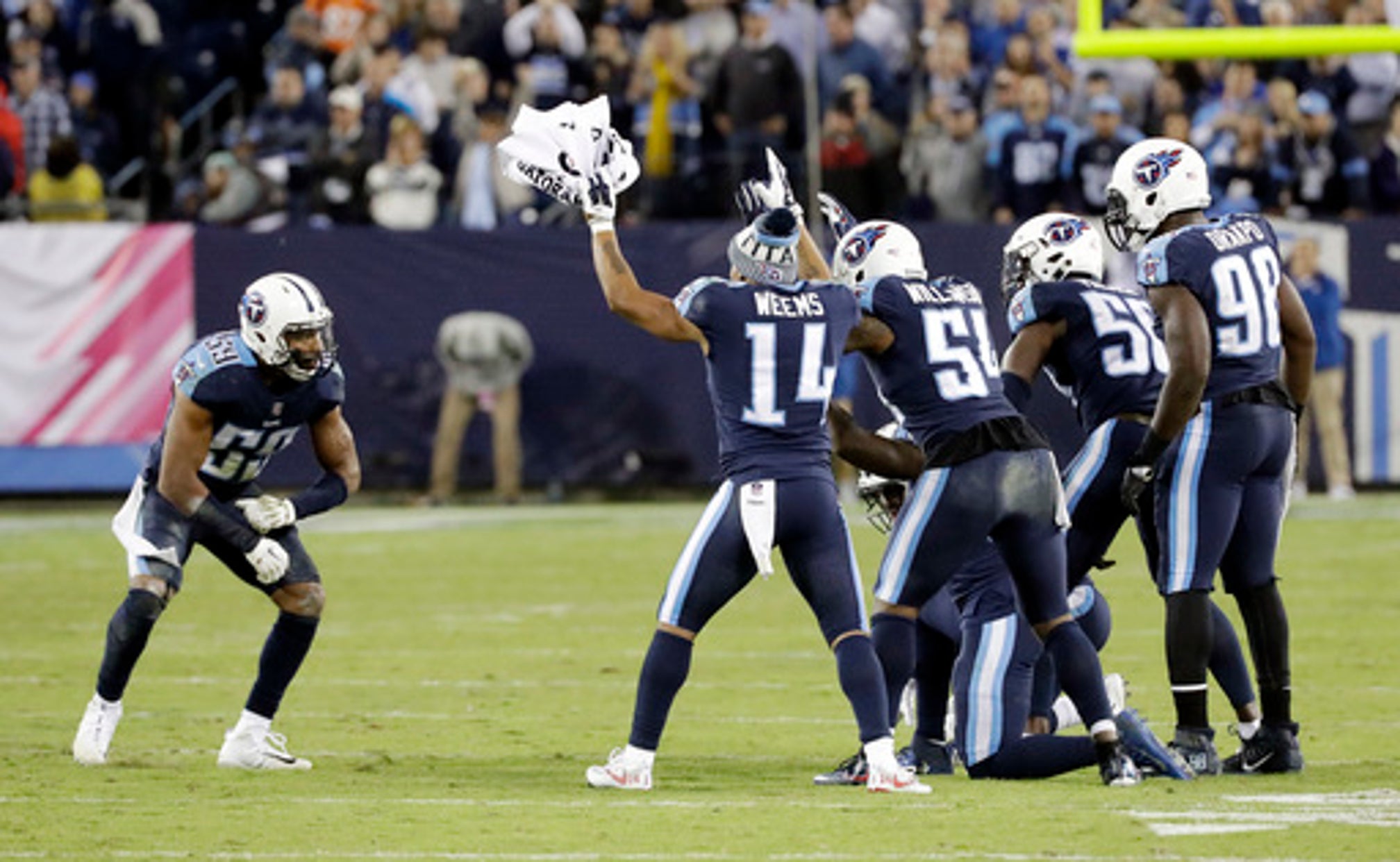 NASHVILLE, Tenn. (AP) Marcus Mariota shuffled around the pocket, carefully protecting a strained left hamstring that already cost him one game this season.

So the quarterback known for his legs showed off his arm.

Mariota threw a 53-yard touchdown pass to Taywan Taylor with 5:29 left , and the Tennessee Titans beat the Indianapolis Colts 36-22 on Monday night to snap an 11-game skid tied for the NFL's longest active losing streak against one team.

Titans coach Mike Mularkey said Mariota followed their instructions, doing whatever he could to lessen the risk of further injury.

''He's as tough as I've been around and made some throws that were, obviously that one to Taywan was a big throw,'' Mularkey said. ''It was a real big throw. I mean he did. He played well.''

Mariota was 23 for 32 for a season-high 306 yards. He completed each of his three passes on the drive that ended with Taylor's tiebreaking score.

The Titans (3-3) stopped a two-game slide and moved into a tie for the AFC South lead with Jacksonville and Houston.

Jacoby Brissett tried to rally the Colts (2-4) to a second straight overtime. But Titans linebacker Wesley Woodyard forced Brissett out of bounds shy of the first-down marker on fourth-and-inches with 2:19 left before going toward midfield to celebrate.

Coach Chuck Pagano lost his challenge of the spot and said he wouldn't blame officials.

''Disappointing to say the least,'' Pagano said. ''Got to play 60 minutes. It's a recurring thing I know that.''

The Titans were pleased to put their skid against the Colts behind them.

''We feel like every game's a must-win, but this was definitely a must-win, especially with the 11-game streak on the line,'' Woodyard said. ''We came in and answered the call.''

The Titans looked like the NFL's worst scoring defense in the first half instead of Indianapolis, with Brissett directing the Colts to a 13-9 halftime lead. John Simon then intercepted Mariota's first pass of the third quarter and returned it 26 yards for a TD.

But the Titans forced the Colts to go three-and-out on three of their first four drives of the second half, and Avery Williamson stripped tight end Jack Doyle of the ball after a catch.

''It's a long season,'' Mariota said. ''You're going to have to play with some sort of nick or ding. I'm just really happy for the guys. I mean they did a great job of putting protection up front.''

Tennessee kicker Ryan Succop went 5 for 5 to break the NFL record for most consecutive successful field goals inside of 50 yards. He connected from 48, 32 and 40 yards in the first half and then hit from 23 and 48 yards in the third.

Succop began the day tied with Matt Bryant, who connected on 46 straight field goals inside 50 yards between 2013 and 2015 for the Atlanta Falcons.

Adam Vinatieri, the Colts' accomplished kicker, got three field goals himself, including a 52-yarder. But he missed an extra point off the left upright.

The Colts' team message got a prime-time audience with outside linebacker Jabaal Sheard wearing a black T-shirt with the message ''We Will'' over his jersey during the coin toss. On the back were the words ''Stand For: Equality Justice Unity Respect Dialogue Opportunity.''

The Colts have been wearing these T-shirts during pregame warmups for the last couple of weeks.

A handful of Titans, including defensive lineman Jurrell Casey, raised a fist into the air after the national anthem ended. Wide receiver Rishard Matthews stayed off the field during the anthem for a third straight game.

Titans linebacker Derrick Morgan strained an abdominal muscle. ... Colts cornerback Rashaan Melvin went to the sideline during an injury timeout in the second quarter but returned to the game. ... Colts running back Robert Turbin was escorted to the locker room after a catch and run for 9 yards with 2:30 left. Pagano said Turbin will get an MRI exam on his elbow.

The Colts' 11-game win streak had been tied with Denver for the longest active streak in the NFL. Now Denver stands alone with its 11-game streak over Cleveland, according to the Elias Sports Bureau.