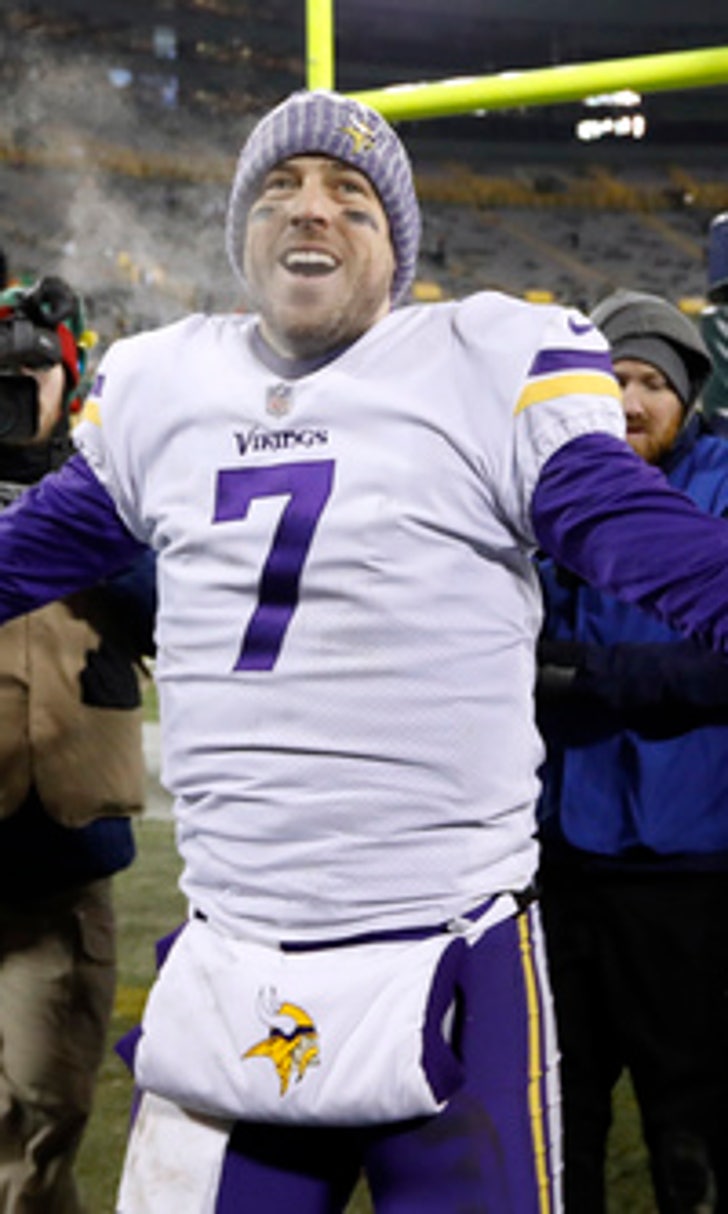 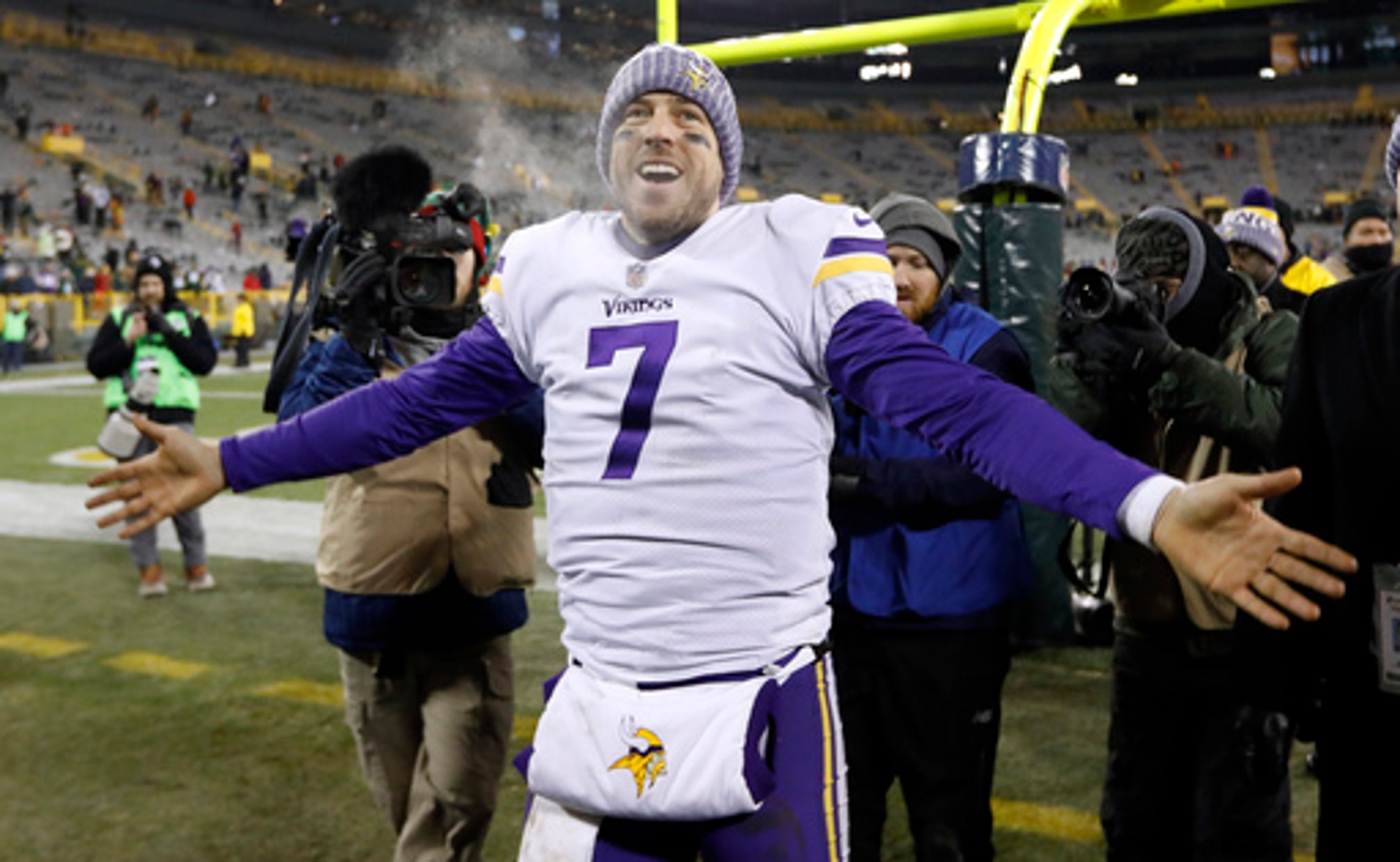 EDEN PRAIRIE, Minn. (AP) No team in the NFL this season allowed fewer points or yards than the Minnesota Vikings, putting them in better position than any of their competitors to prove that old ''defense wins championships'' adage to be true.

For the first time since the famed Purple People Eaters defensive line played in, and lost, four Super Bowls throughout the 1970s, the Vikings have a legitimate title contender with a dominant defense as the backbone.

''These last few weeks we've played really, really well. Defensively, we have a lot of good players. They understand this system and what their responsibility is, and they play very, very hard,'' coach Mike Zimmer said. ''They've got this little edge on them right now that they don't want to give an inch.''

Zimmer's assessment came after the 23-10 victory over Chicago in the final regular-season game, in which the only Bears touchdown came on a trick punt return. Chicago ran 11 plays from the 10-yard line or closer in the fourth quarter and failed to cross the goal line.

The week before that, the Vikings defeated injury-depleted Green Bay 16-0 for their first shutout of the Packers in 46 years. In the game prior to that, they beat Cincinnati 34-7 with the only touchdown by the Bengals coming midway through the fourth quarter against Vikings backups on a 23-yard drive set up by an interception.

Tally that all up, and Minnesota's starting defense has essentially surrendered a total of three points over the last three games. Even against three non-playoff teams, the average of 200 yards per contest yielded and the cumulative 6-for-40 third-down conversion allowance was quite a stamp to put on the 2017 performance.

''The thing about our defense is we're very unselfish. At the end of the day, we understand that if we do what we need to do, do our jobs, do what the defense is called, nobody can stop us,'' defensive end Brian Robison said. ''We just have to keep that mentality going forward.''

Robison is the longest-tenured player on the team, the only one remaining from 2009 when Brett Favre's age-40 renaissance carried the Vikings to the NFC championship game. The defense was stout in that game at New Orleans, an overtime loss to the Saints, but that was Favre's team. The 1998 and 2000 teams that also reached the NFC title game were about Randy Moss and Cris Carter and those record-setting passing attacks. Even the upstart 1987 squad that survived the strike and sneaked into the playoffs scored 80 points over the first two postseason games to reach the NFC championship.

The Vikings would not have finished 13-3 and earned a first-round bye without a productive offense. Case Keenum came out of backup-quarterback obscurity to finish seventh in the NFL with a 98.3 passer rating. Adam Thielen was named a second team All-Pro wide receiver. The Vikings finished seventh in the league in rushing. The identity and strength of this team, though, is unmistakably on the other side of the ball.

The Vikings were second in the league in both rushing and passing yards allowed, so there's not one way to attack them that's better than another. Defensive end Everson Griffen, linebacker Anthony Barr and cornerback Xavier Rhodes were all Pro Bowl picks. Safety Harrison Smith was widely considered one of the biggest snubs, having been given the highest performance grade for any player at any position in the NFL this season by the analytics website Pro Football Focus.

''I just think it's the lack of egos. Everybody wants everybody else to succeed. Nobody cares to be the man,'' Barr said. ''We all play together.''

Zimmer's scheme is built up front around gap control to stop the run and a synchronized pass rush to pressure the quarterback, rather than giving Griffen or defensive end Danielle Hunter a free-range assignment to chase sacks. Barr and linebacker Eric Kendricks have the side-to-side quickness to be able to limit passing yardage to the running backs from and sprint through the ''A'' gaps on either side of the center on a blitz. Rhodes and cornerback Trae Waynes are sound tacklers, usually effective in physical press coverage. Rhodes spent so much time locking up opposing star receivers that he didn't see many passes come his way. Then there's Smith, who can roam in zone coverage for an interception or a big hit, line up in the slot against a tight end or execute a blitz off the edge.

Disguise is a big part of the success, too, with Zimmer's ability to call a game that keeps the other team uncomfortable about where the rush will come from or how the coverage will be mixed up.

''They're fun to watch,'' said Thielen, who has a field-level view when he's on the sideline. ''The way they fly around. The way that they get to the ball when it seems the team has an easy first down and, boom, they're right there closing the gap and stopping them short.''

What You Need To Know To Win $100,000
NFL fans have a chance to win big absolutely for free this week. Jason McIntyre navigates a landscape full of backup QBs.
21 hours ago