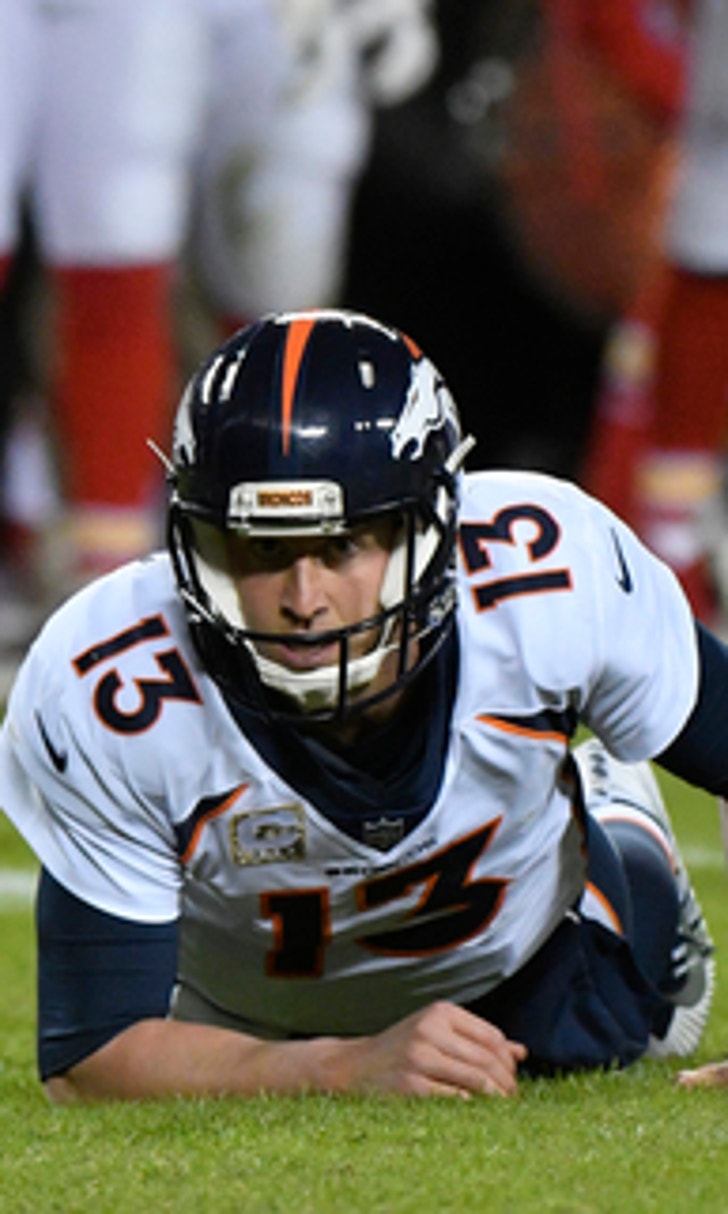 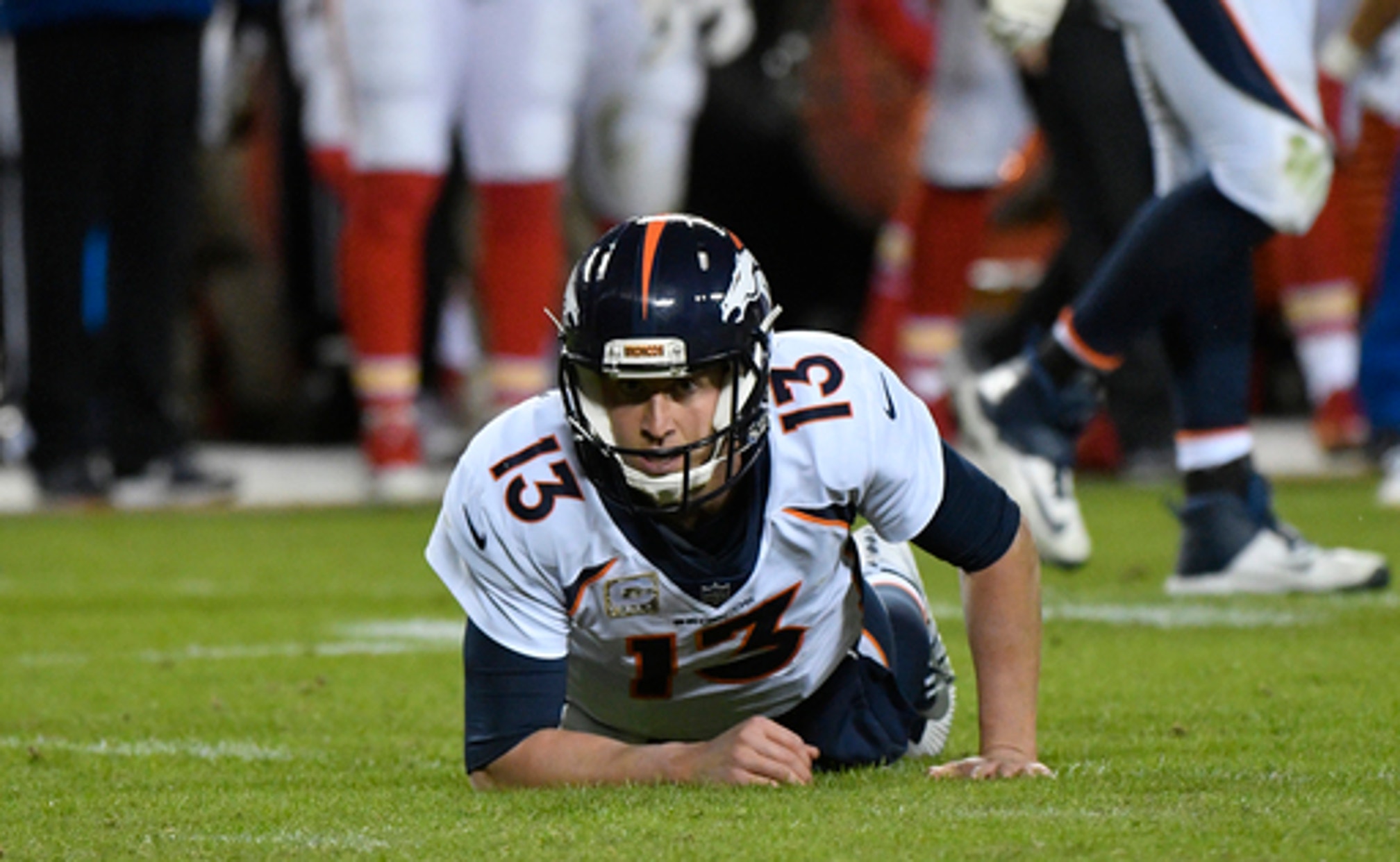 Siemian's half dozen turnovers during Denver's three-game losing streak cost him his starting job 48 hours after his three ugly interceptions wasted a strong defensive effort in a 29-19 loss at Kansas City.

''It came down to what's best for our football team and frankly, what's best for Trevor's future,'' coach Vance Joseph said Wednesday after naming his starter for Sunday, when the Broncos (3-4) visit the Philadelphia Eagles (7-2). ''The team was OK with it. They trust Brock. He's been here before.''

Osweiler started seven games in place of an injured Peyton Manning two years ago, going 5-2 in helping the Broncos secure home-field advantage in the AFC playoffs on their way to their Super Bowl 50 title.

In bolting two months later for $37 million in guarantees from the Houston Texans, Osweiler embarked on an 18-month odyssey that included a playoff win, a benching, a blow-up, a trade, the birth of his daughter, his release from Cleveland and ultimately a return to Denver , where backup Paxton Lynch had sprained his throwing shoulder in the preseason.

The first thing Osweiler did was text Siemian.

''And I said, `Hey Trev, this is your team. You've earned it. This is your squad. I'm here to do whatever you need me to do to help you win games,'' Osweiler recounted Wednesday. ''And now the roles have just flipped.''

So, Osweiler will make his first start in a Broncos uniform Sunday since Jan. 3, 2016 .

''It's hard to really put in words just because of how much love I have for this organization, my teammates and this city,'' Osweiler said. ''... This week is solely about our football team trying to get a win.''

Joseph said the coaching staff and Siemian's teammates aren't without blame in Denver's slump but Siemian is the one paying the price, something Joseph insisted would ultimately benefit the third-year pro who is 11-10 with 27 TDs and 20 interceptions.

''His career is not over by this. Lots of young quarterbacks have to take a step back to just watch the game and figure out how to play the game better,'' Joseph said. ''All of the good quarterbacks are game managers. That's a negative term in football but it shouldn't be because to be a quarterback, you have to manage the football. That part, he's been struggling with.''

Siemian said he'll ''just take a step back and take a breather and kind of evaluate some things'' while also being there for Osweiler.

Joseph made clear his mandate to Osweiler: protect the football.

''You know, the saying is `job security is ball security,' and if you protect the football, you're going to stay out there on the field,'' Osweiler said. ''So, game manager, protecting the football, whatever you call it, that's our job every week.''

Osweiler went 8-6 in Houston last year before being benched but he was back starting for the Texans' win over Oakland and loss to New England in the playoffs, after which he was traded to Cleveland.

Siemian also went 8-6 last season but the Broncos missed the playoffs at 9-7. He had to beat out Lynch again last offseason after Joseph replaced coach Gary Kubiak.

Lynch returned to practice last week and could get his own shot at starting should Osweiler falter and the Broncos slip out of contention. They're only a game back in the AFC wild card race right now.

After his release by the Browns, Osweiler quickly reunited with the Broncos, saying he'd learned his lesson about leaving such an ideal situation. He said he told his agent if the Broncos wanted him back, ''I don't care if it's a dollar, that's where we're going.''

Of course, he's getting much more than that - $16 million this season, 95 percent of it paid by the Browns.

Showing he held no grudges, general manager John Elway declared Denver never would have won the Super Bowl without Osweiler and suggested that with offensive coordinator Mike McCoy and QBs coach Bill Musgrave, Denver was just the place for Osweiler to revive his career so he could be a starter again.

Turning serious, Osweiler said sometimes what's best for a passer who is pressing ''is actually pulling him out of the fire and making him the backup and letting him observe.''

Which he did in Denver for the last two months.

Notes: Rookie QB Chad Kelly, who is almost certainly headed to IR next week, practiced with the other QBs during the jog-through Wednesday. ... Joseph said he's not sure if TE Jake Butt (knee) will come off the reserve/non-football injury list this weekend.