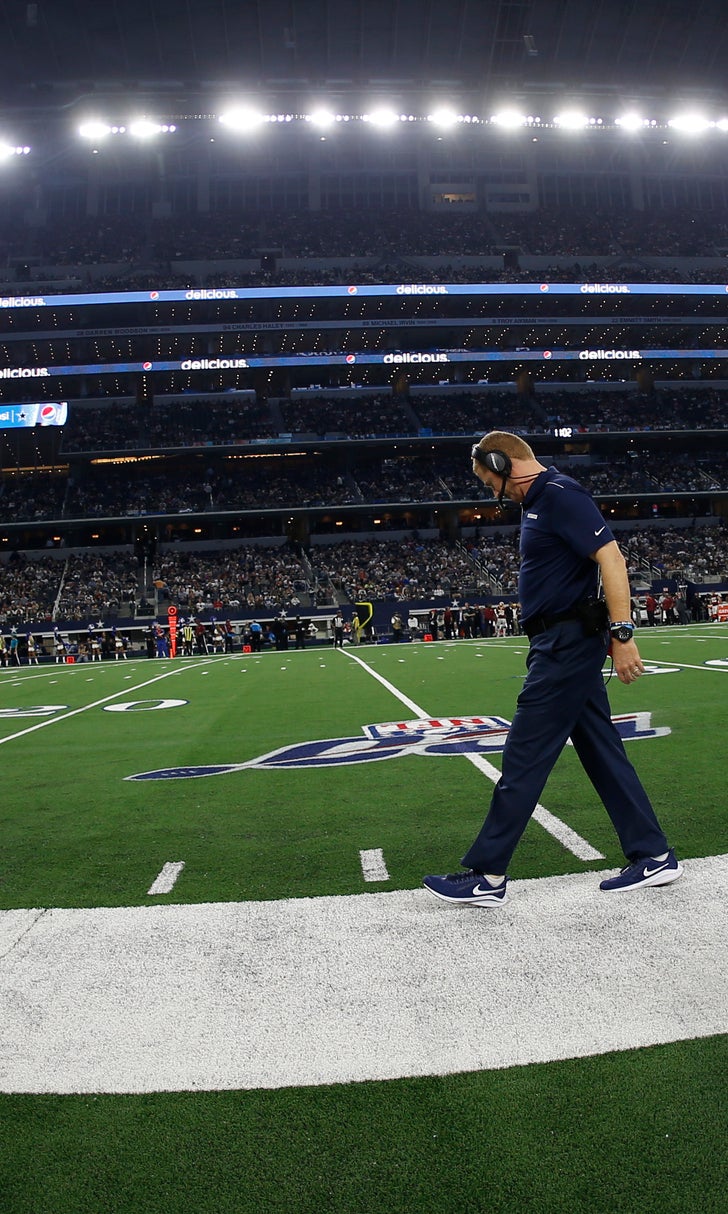 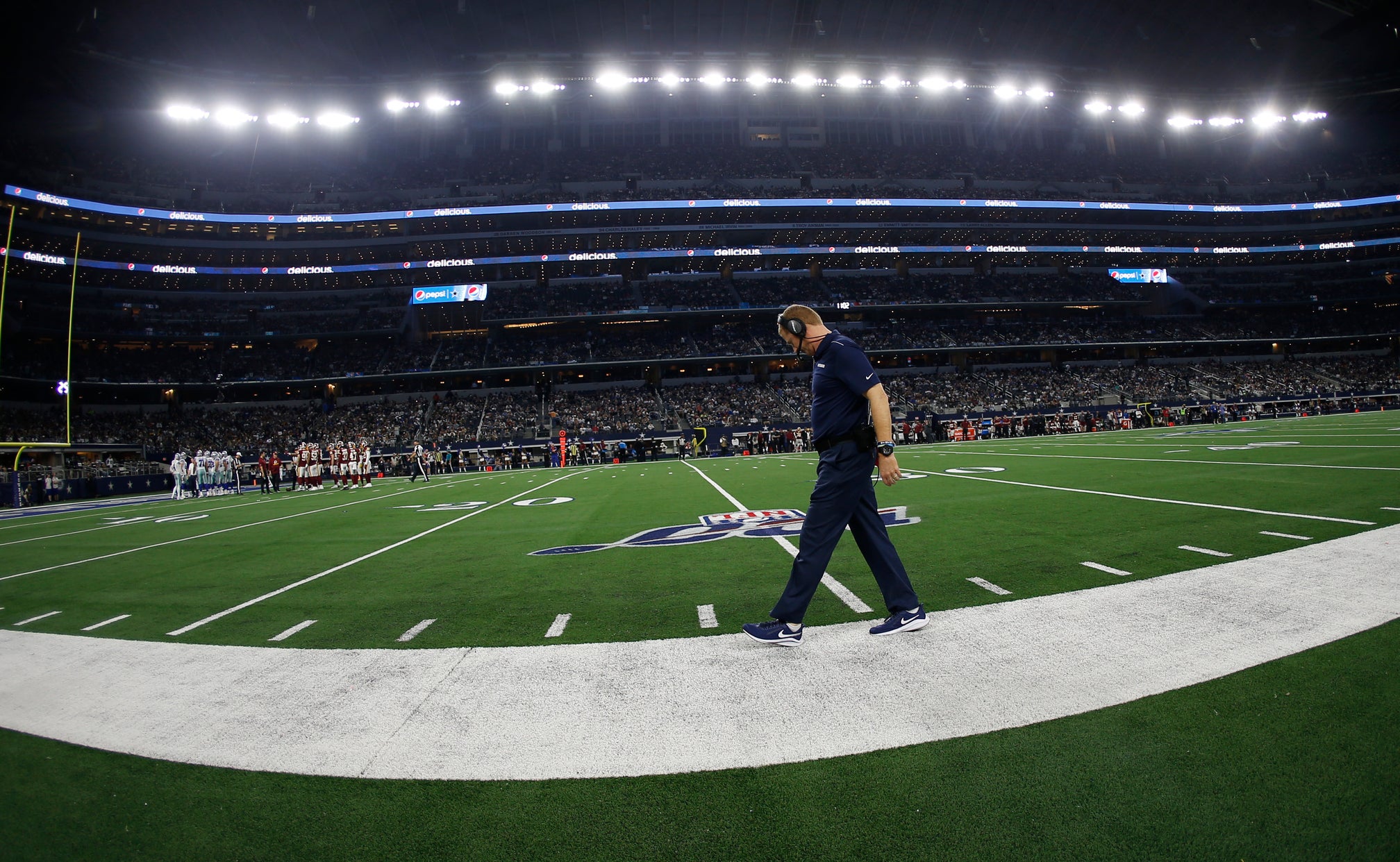 Dallas Cowboys finally move on from Jason Garrett as coach

FRISCO, Texas (AP) — The Dallas Cowboys made official Sunday night what they had already signaled: Jason Garrett is out as coach.

Garrett was informed he wouldn't be back for a 10th full season on the same day the Cowboys finished an interview with former Green Bay coach Mike McCarthy, who won a Super Bowl with the Packers on Dallas' home field nine years ago.

At 9½ seasons, the 53-year-old Garrett had the club's second-longest tenure behind Pro Football Hall of Famer Tom Landry, who coached the Cowboys for the franchise's first 29 years before Jones fired him when he bought the team in 1989.

Dallas finished 8-8 for the fourth time under Garrett. The Cowboys fueled high preseason expectations with a 3-0 start before dropping eight of 12 and losing control of their playoff fate. Dallas missed the playoffs six times in Garrett's nine full seasons.

The inevitable conclusion was a difficult one for Jones, who hired Garrett as offensive coordinator in 2007 even before choosing Wade Phillips as coach. Garrett got the interim job when Phillips was fired halfway through the 2010 season.

“We are extremely grateful to Jason Garrett for his more than 20 years of service to the Dallas Cowboys as a player, assistant coach and head coach,” Jones said in a statement released by the team that ended a week of speculation on the future of Garrett, who continued showing up at team headquarters after the season ended.

“His level of commitment, character and dedication to this organization has been outstanding at every stage of his career."

McCarthy reached the playoffs nine times in 13 seasons with the Packers, reaching the NFC championship game four times. Green Bay won at least 10 games eight times in his first 11 seasons before going 7-9 in 2017. McCarthy was fired with the Packers at 4-7-1 last season.

The biggest knock on Lewis was his 0-7 playoff record with the Bengals. He had a 131-122-3 record in the regular season and was fired after a third straight losing season in 2018.

Dallas hasn’t been past the divisional round of the playoffs in 24 straight seasons since the club’s fifth Super Bowl title to finish the 1995 season. Garrett got them within a victory of the NFC championship game three times in five years, losing to Green Bay twice and then the Los Angeles Rams last season.

When training camp opened, Jones didn’t want to talk about what it would take for Garrett to get another contract. It had been five years since Garrett was coaching for his job and the Cowboys went 12-4 and won a wild-card game before a loss at the Packers that included the infamous catch that wasn’t by Dez Bryant.

Jones had high hopes with quarterback Dak Prescott going into his fourth season along with star running back Ezekiel Elliott, who got a $90 million extension the morning of the first practice of the regular season after holding out the entire preseason.

With Dallas at 3-0, video emerged of Jones mingling with fans in the French Quarter the night before a game in New Orleans. Dallas lost 12-10 to start the first of two three-game losing streaks.

The Cowboys have never made the playoffs when losing at least three straight games twice in a season, although they had a chance to qualify with a win at Philadelphia in Week 16. Dallas lost 17-9, then was eliminated in Week 17 despite a blowout victory over Washington when the Eagles won the NFC East by beating the New York Giants.

Garrett spent seven seasons as a player with the Cowboys, starting nine games in place of Aikman. His most memorable start was a 42-31 victory over Green Bay on Thanksgiving in 1994 when he threw for 311 yards and two touchdowns. Dallas lost to San Francisco in the NFC championship game that season.

After playing sparingly for the Giants from 2000-03 and not at all with Tampa Bay and Miami in 2004, Garrett retired and joined Nick Saban’s staff as quarterbacks coach. He went to the Cowboys after Saban decided to return to college coaching at Alabama.

“Jason Garrett’s legacy with the Dallas Cowboys will always be that of someone who strived for greatness every day that he walked through the door," Jones said. “He is, and always will remain, a cherished member of the Dallas Cowboys family.”

The Path of Least Consistence
For the NFC East, wins haven't been aplenty. However, intrigue has been in never-ending supply.
3 days ago

Washington Runs Over Cowboys
Antonio Gibson's huge day gave Washington an important victory against the Cowboys and first place in the NFC East.
5 days ago

How To Win $50,000 On Thanksgiving
As old rivals collide with first place in the NFC East on the line Thanksgiving Day, fans can win big – for free.
5 days ago

The Story Of America's Team
Jimmy Johnson and Troy Aikman reflect on their Dallas dynasty ahead of the Cowboys' annual Thanksgiving Day game.
6 days ago
those were the latest stories
Want to see more?
View All Stories
Fox Sports™ and © 2020 Fox Media LLC and Fox Sports Interactive Media, LLC. All rights reserved. Use of this website (including any and all parts and components) constitutes your acceptance of these Terms of Use and Updated Privacy Policy. Advertising Choices. Do Not Sell my Personal Info