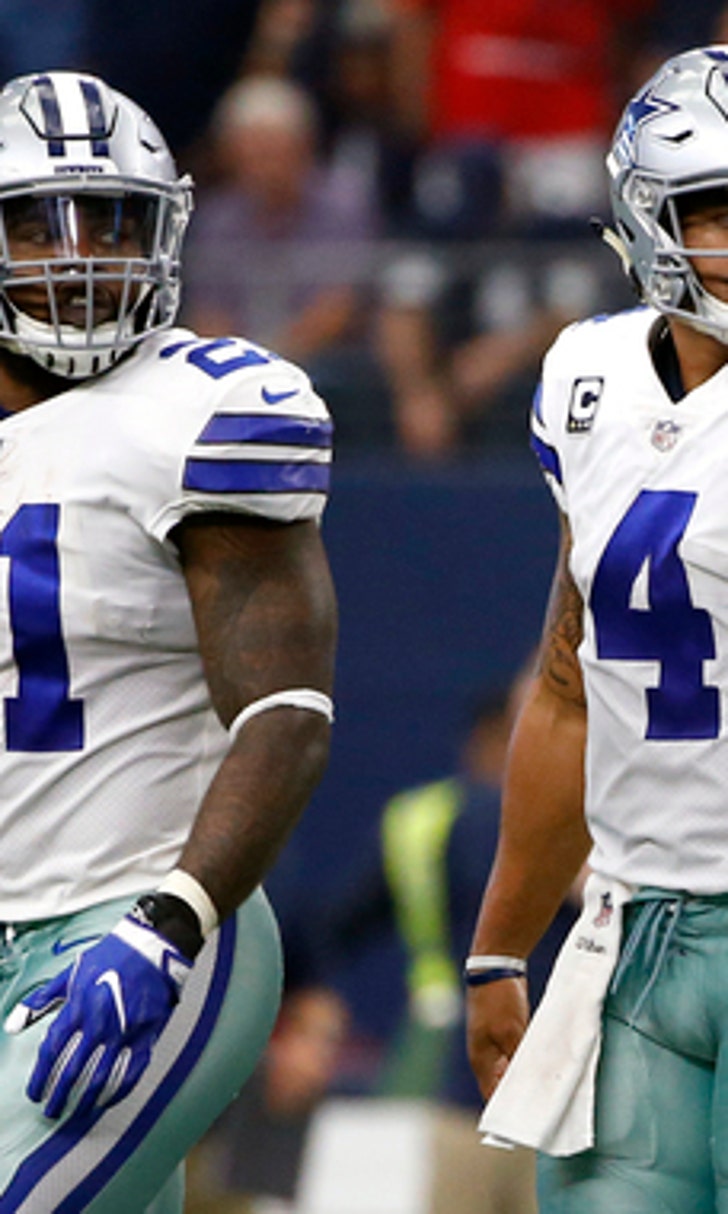 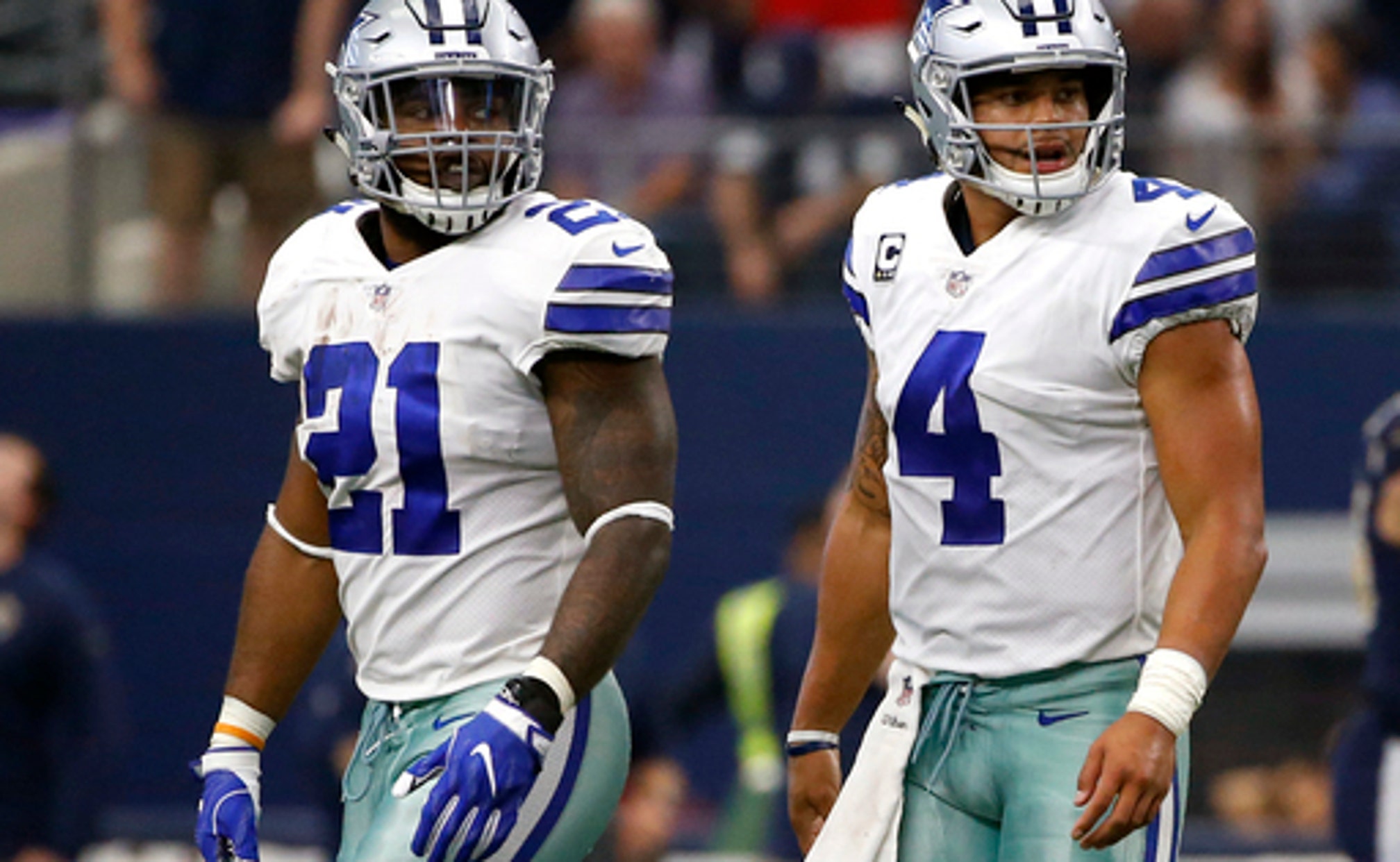 Chiefs' Hunt gets showdown with Cowboys' Elliott after all

ARLINGTON, Texas (AP) Kareem Hunt will get to compare himself to Ezekiel Elliott after all when Kansas City visits Dallas.

The dynamic rookie running back for the Chiefs is doing many of the things the Cowboys star did in his debut last season, headlined by leading the NFL in rushing.

Thanks to another temporary legal reprieve for Elliott, Hunt will get an up-close comparison Sunday against Dallas (4-3). Elliott will be able to play after a federal appeals court granted an emergency stay Friday. There have been two previous halts to Elliott's six-game suspension over alleged domestic violence.

Hunt didn't mind saying he was disappointed that he wouldn't face Elliott when the suspension was in place earlier in the week. The Chiefs (6-2) will try to set a franchise record with a 10th straight road win.

''I watched Zeke a ton,'' Hunt said of his senior year at Toledo, when Elliott and quarterback Dak Prescott, his fellow rookie, were powering the Cowboys to the best record in the NFC. ''Dak played pretty well and so did he. I was able to watch and see all the great runs he had. I kind of wanted to come in and have a year like he did his rookie season.''

Consider it done so far. Hunt is the first NFL player with at least 100 scrimmage yards in each of first seven games and leads the NFL with 763 yards rushing and 1,070 yards from scrimmage.

''He's the engine behind that offense,'' Dallas coach Jason Garrett said. ''He's been one of those guys who's been steady for them, but also has made a lot of plays for them.''

While he's not quite on the rushing pace of Elliott when the Dallas back led the league with 1,631 yards a year ago, Hunt is another option when quarterback Alex Smith already has plenty, including All-Pro tight end Travis Kelce.

Smith is four touchdowns from tying Peyton Manning's record of 20 TD tosses without an interception to start a season while guiding the NFL's third-ranked offense.

Things to consider in Kansas City's first visit to the $1.2 billion home of the Cowboys that opened in 2009:

The 22-year-old is on the third legal ruling keeping him on the field, although this one has the chance to be the shortest if the 2nd U.S. Circuit Court of Appeals in New York rules on his request for an injunction next week. Elliott has now been away from the team four days because of the suspension - one day two weeks ago after a New Orleans appeals court lifted an injunction granted in Texas and three days this week after a New York judge rejected his request for another injunction.

''It's really at this point hard for me to get down or up about this whole situation because tomorrow it could be something different,'' Elliott said Friday after he was allowed to rejoin the team. ''So I mean it's really not, like I said, worth my time to even worry about.''

If the game comes down to field goals, give the edge to the Chiefs. Harrison Butker has connected on 18 straight attempts since missing the first of his career. The pickup off the Carolina practice squad was 5 for 5 in Monday night's victory over Denver, including one from 51 yards. The Cowboys are without Dan Bailey, the most accurate in history among kickers with at least 100 attempts, because of a groin injury. Mike Nugent missed his first kick as the replacement last week against Washington, a 49-yarder, but made the next four in a 33-19 win.

UP TO THE BOOTH

Tony Romo, the Dallas franchise leader in passing yards and touchdowns, will call his first Cowboys game as the lead analyst for CBS. A year ago, he was still recovering from a back injury that made Prescott the starter, a job Prescott never gave up thanks to a franchise-record 11-game winning streak. Romo was the backup when he was healthy again, then chose replacing Phil Simms alongside Jim Nantz over trying to chase an elusive Super Bowl somewhere else.

''I am looking forward to the production meeting,'' Prescott said. ''Obviously the first time with Romo will be cool.''

Prescott could see a lot of an old friend in the backfield. He was teammates with Chiefs defensive tackle Chris Jones at Mississippi State. Jones was actually chosen ahead of Prescott in 2016, going in the second round to Kansas City. Prescott was a fourth-rounder.

How To Win $50,000 On Thanksgiving
As old rivals collide with first place in the NFC East on the line Thanksgiving Day, fans can win big – for free.
6 hours ago

The Story Of America's Team
Jimmy Johnson and Troy Aikman reflect on their Dallas dynasty ahead of the Cowboys' annual Thanksgiving Day game.
19 hours ago

Feasting On Wins In Week 12
From a Turkey Day teaser to all the wagers a bettor could want, Geoff Schwartz makes his picks for Week 12.
19 hours ago

Two-Horse Race
Geoff Schwartz says the Chiefs and Steelers have separated from the AFC pack, and he picks the horse to bet on in the NFC East.
3 days ago
those were the latest stories
Want to see more?
View All Stories
Fox Sports™ and © 2020 Fox Media LLC and Fox Sports Interactive Media, LLC. All rights reserved. Use of this website (including any and all parts and components) constitutes your acceptance of these Terms of Use and Updated Privacy Policy. Advertising Choices. Do Not Sell my Personal Info