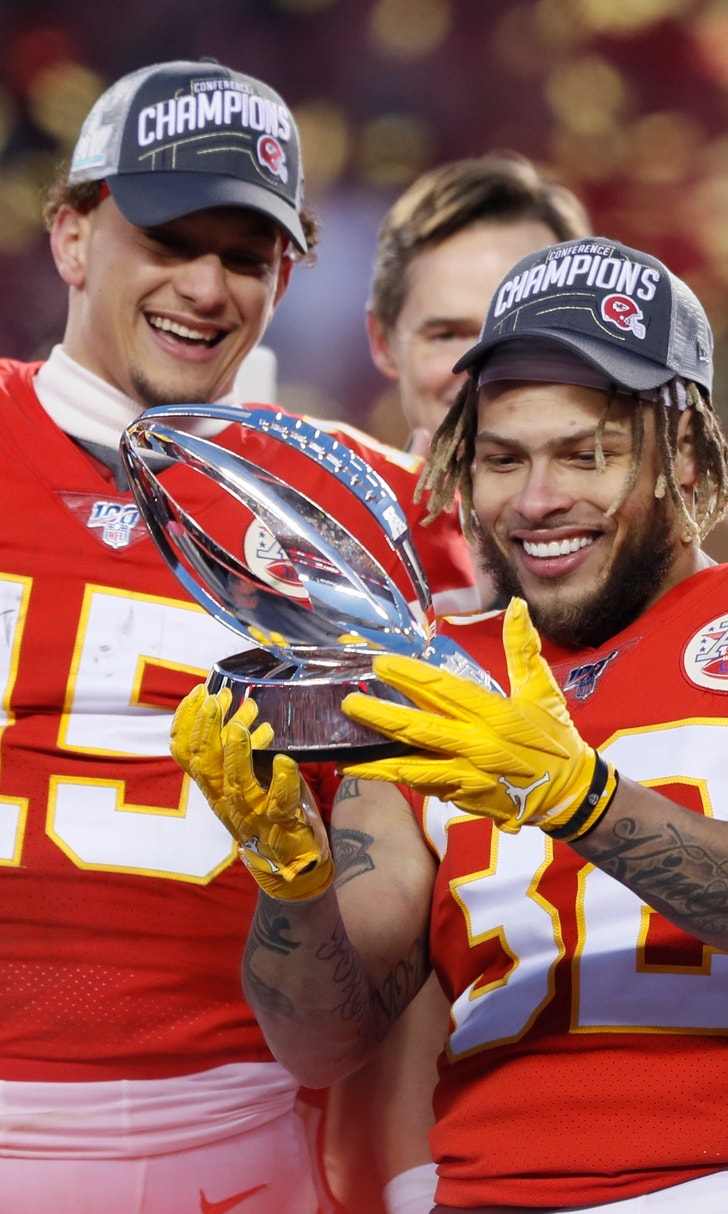 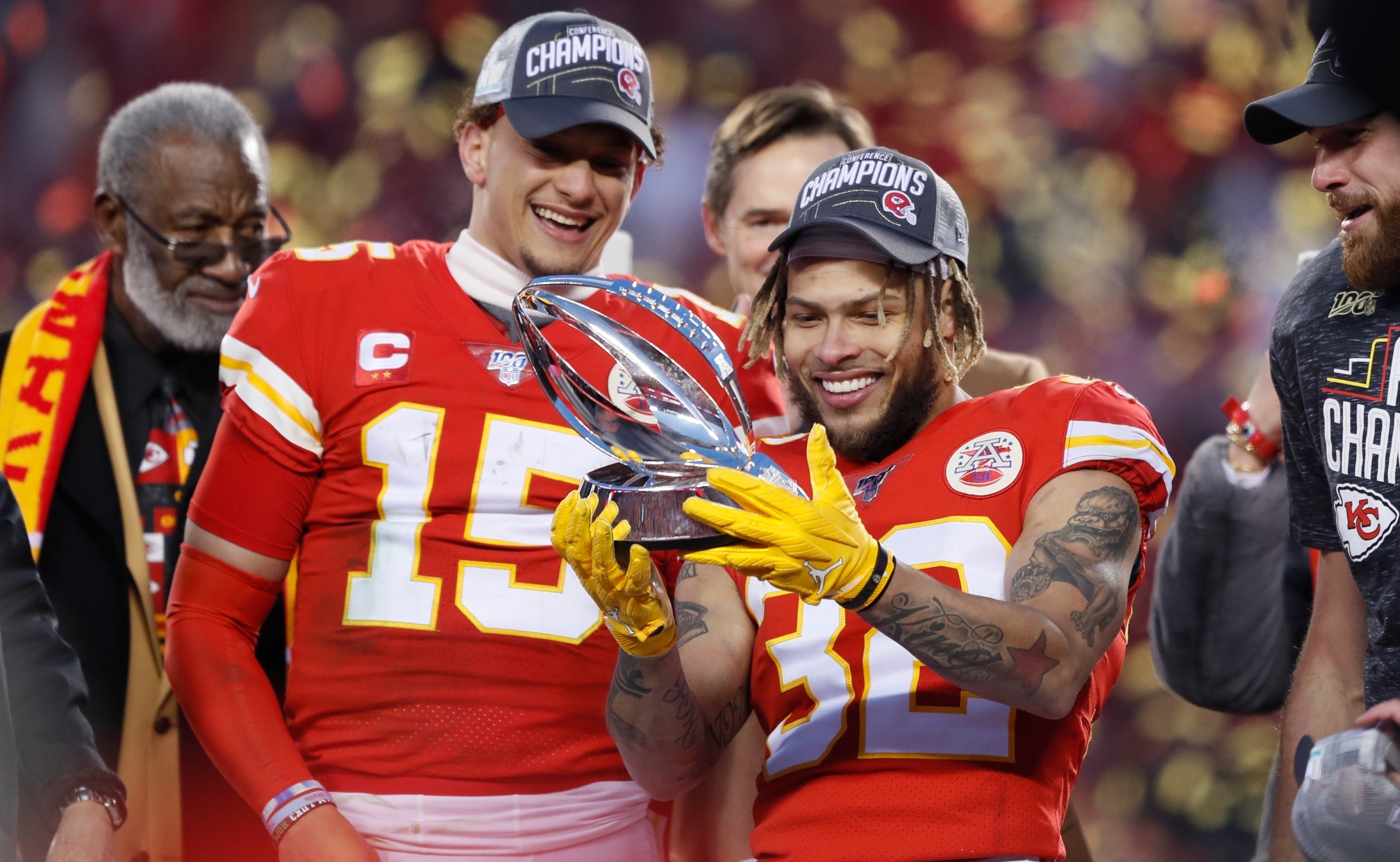 KANSAS CITY, Mo. (AP) — Patrick Mahomes tip-toed down the sideline for a game-turning touchdown, added three TD passes, and the Kansas City Chiefs made their first Super Bowl in a half-century by beating the Tennessee Titans 35-24 Sunday for the AFC championship.

In two weeks in Miami, the Chiefs will play San Francisco for the title.

Mahomes did his usual superb job passing, but it was his 27-yard tap dance down the left sideline late in the first half that gave the Chiefs their first lead. From there, they outran the run-oriented Titans and star back Derrick Henry.

Adding to the joy of the achievement, coach Andy Reid and owner Clark Hunt accepted the Lamar Hunt Trophy — named after his father — emblematic of the AFC title.

Next up: chasing the Vince Lombardi Trophy.

As they had done in their past three "elimination'' games, the sixth-seeded Titans (11-8) got started quickly. The difference at Arrowhead as opposed to Houston, New England and Baltimore was that the Chiefs had Mahomes, Tyreek Hill, Sammy Watkins and Damien Williams on offense, and a vastly upgraded defense from when they lost in last year's AFC title game.

A week after they overcame a 24-0 deficit against Houston, the Chiefs had to rally again.

Down 10-0 and 17-7, Kansas City didn't flinch, building a 35-17 lead while controlling the clock with a strong ground game. Naturally, Mahomes complemented that with sharp passing, spreading the ball on short and deep throws. The dagger came with a 60-yard completion to Watkins for the Chiefs' 28th straight point midway in the final period.

Mahomes thrust both arms in the air as the crowd sang “I Wanna Dance With Somebody.”

After taking a 3-0 lead on Greg Joseph's first field goal — with Tennessee's penchant for scoring in the red zone, he hadn't been called upon in his previous four games with the team — the Titans got a huge break. Bashaud Breeland appeared to make a diving interception, but replay review showed the ball hitting the ground.

Helped by consecutive offside penalties and a fourth-down pass to Adam Humphries for his first career playoff reception, the Titans converted on, what else, Henry's 4-yard run.

Then the Chiefs got rolling, scoring on three successive series. Hill took it in on a shovel pass, later beat top Titans cornerback Logan Ryan for a 20-yard reception, and Mahomes finished the half with his brilliant jaunt down the left sideline with half the Tennessee defense seemingly expecting him to step out of bounds.

That gave the Chiefs a 21-17 lead. It went to 28-17 on Williams' 3-yard run to cap a seven-minute drive. Then Watkins toasted Logan for the clinching long pass.

Henry was held to 69 yards on 19 carries after rushing for 588 yards in the past three games as an unstoppable force. But the Chiefs easily outrushed the Titans on Sunday.

The 49ers (15-3) advanced to their first Super Bowl in seven years and will play the Kansas City Chiefs in two weeks in Miami for the championship.

It's been a remarkable turnaround for a team that won just 10 games in the first two seasons under coach Kyle Shanahan and general manager John Lynch and had the No. 2 pick in the most recent draft.

Now, San Francisco is one of two teams left standing after delivering a second thorough beating of the season to Rodgers and the Packers (14-4). The Niners are the third team to make it to the Super Bowl a year after winning four or fewer games, joining Cincinnati (1988) and the Rams (1999).

Bosa, the prize for last year's rough season as the No. 2 overall pick, helped set the tone when he ended Green Bay's second drive of the game with a 13-yard sack of Rodgers.

Mostert, a former special teams standout, did much of the rest in a remarkable redemption story for a former surfer who was cut seven times and carried the ball only eight times in his first three seasons in the NFL.

But he has become a key part of the NFC's top team this year, leading the Niners with 772 yards rushing in the regular season and delivering a performance for the ages in the NFC title game.

He had the second-most yards rushing in a playoff game to Eric Dickerson's 248 for the Rams on Jan. 4, 1986, and was the first player to rush for at least four TDs and 200 yards in a playoff game.

He got started when he burst 36 yards on a third-and-8 trap play to open the scoring on San Francisco's second drive and kept ripping off long runs behind impressive blocking.

He added TD runs of 9 and 18 yards in the second quarter and had 160 yards rushing at the half, becoming the only player in NFL history to rush for at least 150 yards and three TDs in the first half of a playoff game.

Mostert added a 22-yard TD run in the third quarter.