Johnny Manziel's tightest spiral with the Browns was a downward one.

Less than two years after arriving armed with a Heisman Trophy, full of swagger and touted as a savior for this football-frenzied city's sagging franchise, Manziel was shown the door — a rude exit for the overhyped quarterback.

Manziel, who did as much partying as playing during two drama-filled seasons with the Browns, was waived Friday.

Welcomed as a hero, he leaves as one of the biggest busts in team history.

The Browns had hoped to recoup something for the former Texas A&M star, but after failing to find a team interested in trading for him the past two days, the team finally cut ties. Cleveland announced its move with a simple sentence: "The Cleveland Browns have waived Johnny Manziel." The Browns included his pedestrian statistics but not any comment.

Actions, not words. That was the same mantra they asked of Manziel, who always promised to change his behavior but never did.

The Browns drafted Manziel in the first round in 2014, hoping he could solve their long-term issue at quarterback and turn around a team that has only been to the playoffs once since 1999 and never to the Super Bowl. 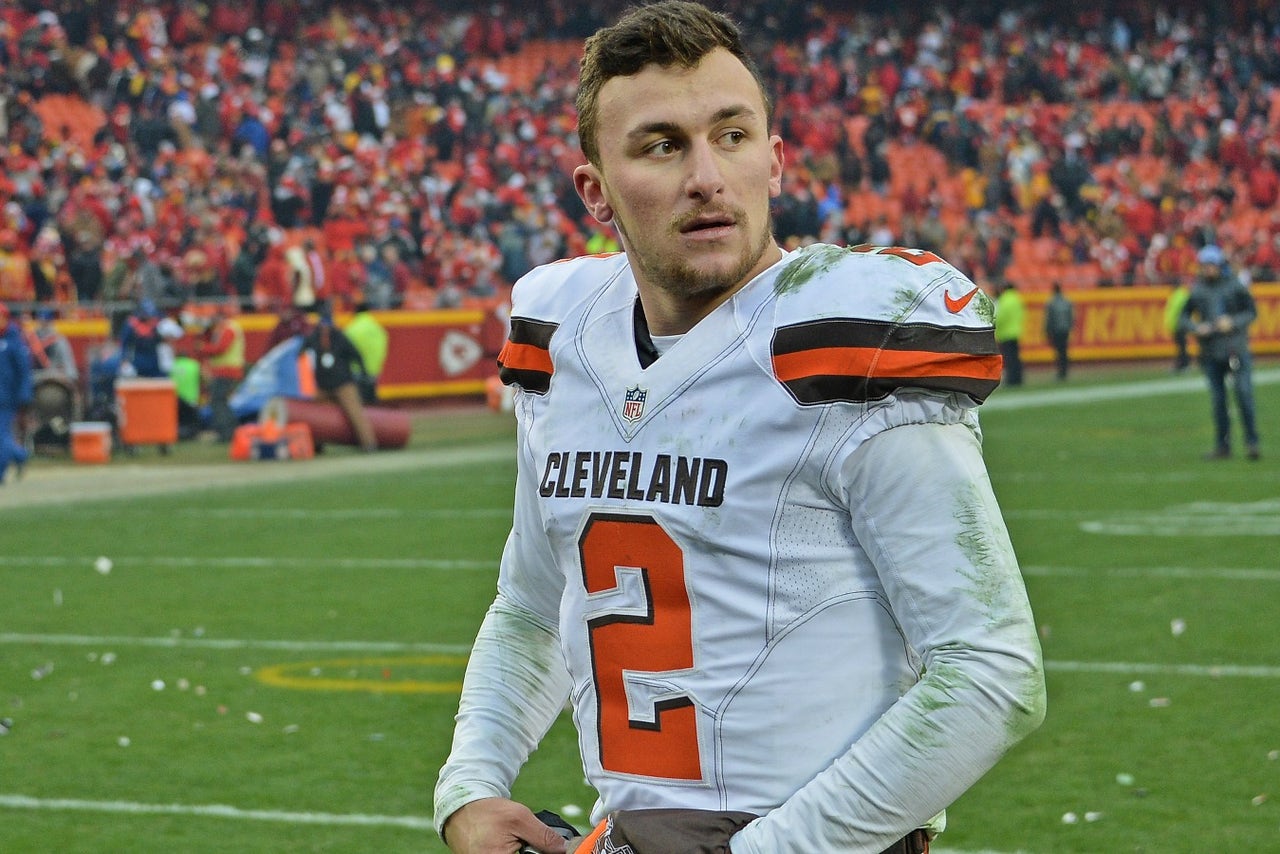 Instead, Johnny Football was a two-year headache that wouldn't go away.

"I'd like to thank the Browns for the opportunity they gave me — nearly two years ago, we all hoped that we were building what could be a championship team for Cleveland," Manziel said in a statement released by his publicist. "I will always remember the support I received from the organization, my teammates and especially the fans."

Manziel entered the league amid fanfare and with a party-boy reputation, which only grew thanks to nearly constant exposure on social media. While he was with the Browns hardly a week passed without there being a photo or video of Manziel, usually with a drink in his hand and once floating on an inflatable swan, out having a good time.

But he paid for all those late nights in bars and clubs as Manziel hasn't developed the work ethic needed to succeed and he wound up spending more than 10 weeks following his rookie season in a Pennsylvania rehab facility specializing in alcohol and drug abuse.

The Browns supported him as long as they could, but his decision to skip the team's season finale against Pittsburgh — he had a concussion at the time — for a trip to Las Vegas and a second domestic incident in three months was more than the team could tolerate and they dumped Manziel, who went 2-6 as a starter and finished with 1,675 yards seven touchdowns and seven interceptions.

And now that he's no longer with the Browns, Manziel has other issues to handle.

On Feb. 25, Dallas police referred their domestic violence case against him to a grand jury, which will exam evidence against Manziel. His ex-girlfriend, Colleen Crowley, accused Manziel of striking her in the head during a night out on Jan. 30.

Manziel is also being investigated by the NFL, which could suspend him for his off-field behavior. He was cleared by the league in October following a similar incident with Crowley.

It all began with such promise.

As he sat backstage inside New York's Radio City Music Hall on draft day, Manziel famously sent a text to a Browns assistant coach urging the team to take him so they could "wreck this league" together. Although other teams passed on him, the Browns, with the approval of owner Jimmy Haslam, traded two picks to move up and take him with the No. 22 pick, a selection they would later regret.

That night, the young man nicknamed Johnny Football strutted on stage rubbing his fingers together, the "money" gesture he would later ditch after opponents taunted him with it. He hugged Commissioner Roger Goodell and all seemed right for the Browns.

Back in Cleveland, fans quickly scooped up tickets and his No. 2 jersey.

Following a rough rookie season, Manziel vowed to come back better. In January, he entered a treatment center for an unspecified addiction. He left after 73 days, and there was hope Manziel had exorcised demons.

The Browns stood by Manziel. Pettine, who would eventually be fired, named him starter in Week 9, and Manziel showed promise against Cincinnati and Pittsburgh. Manziel, though, was demoted to third string after a video surfaced of him partying during the team's bye week.

He returned to the starting lineup and led the Browns to a win over San Francisco and made two more starts before sustaining a concussion.

Manziel wasn't required to be at Cleveland's finale, but he skipped a required medical checkup and the team didn't know where he was amid reports he was hitting the clubs and casinos in Vegas while wearing a disguise.

The alarming events involving Crowley in Texas, including police using a helicopter to locate a despondent Manziel, were the final straw for the Browns.

Do You Believe-Land?
Baker Mayfield and his wife saw a UFO on Wednesday night in Central Texas. And Colin Cowherd wants to talk about it.
1 day ago

Catch Your Breath
Odell Beckham Jr. rumors are flying left and right. Greg Jennings breaks down the potential best fits for the star wideout.
February 18
those were the latest stories
Want to see more?
View All Stories
Fox Sports™ and © 2021 Fox Media LLC and Fox Sports Interactive Media, LLC. All rights reserved. Use of this website (including any and all parts and components) constitutes your acceptance of these Terms of Use and Updated Privacy Policy. Advertising Choices. Do Not Sell my Personal Info