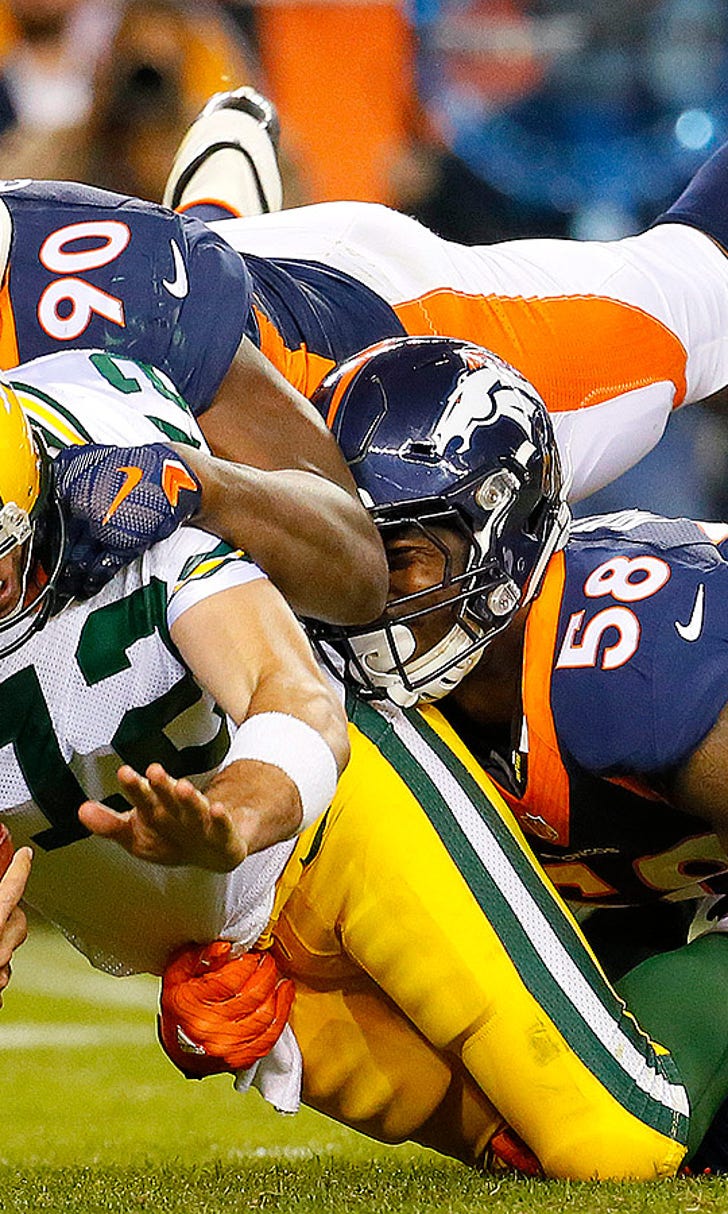 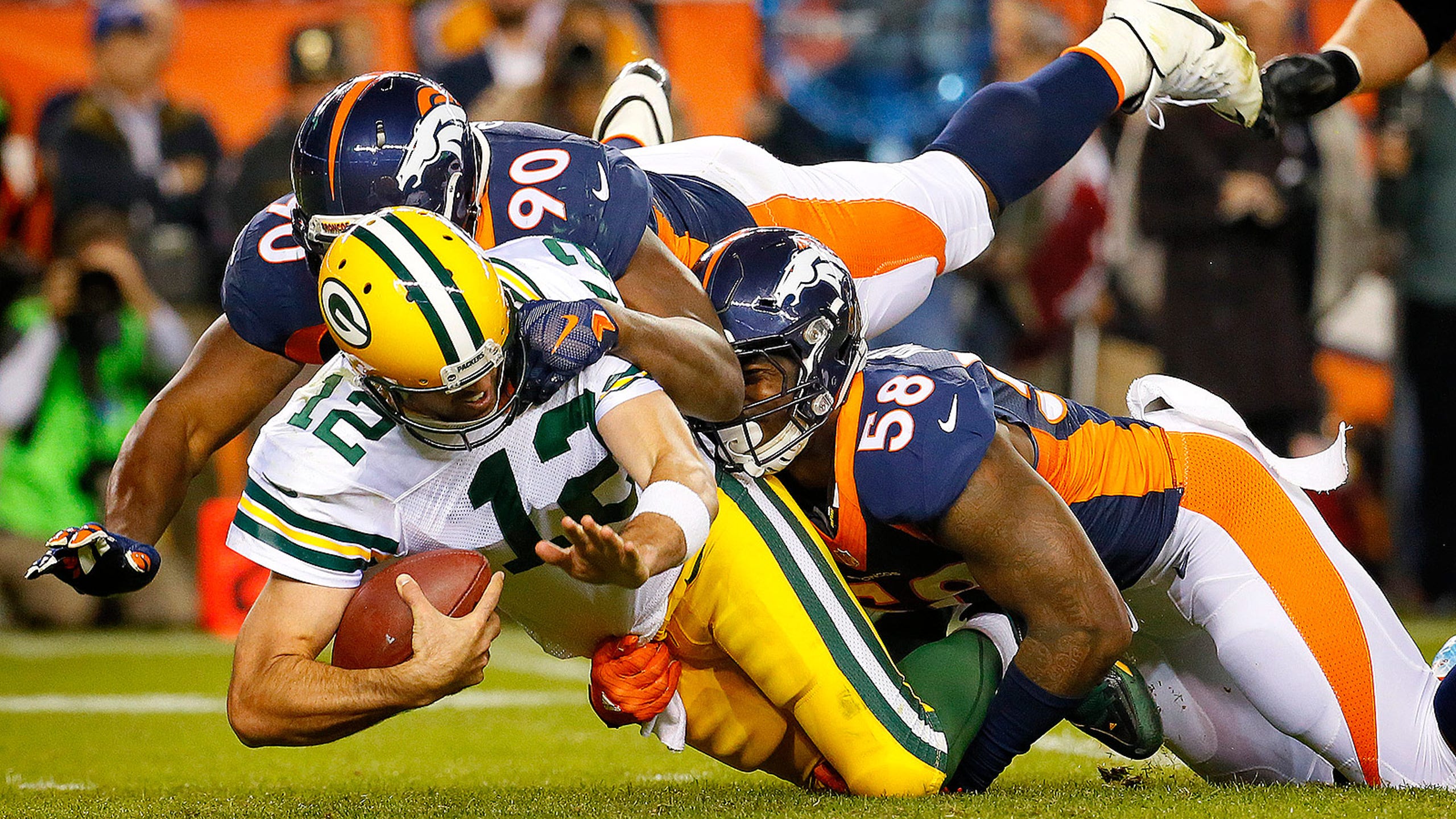 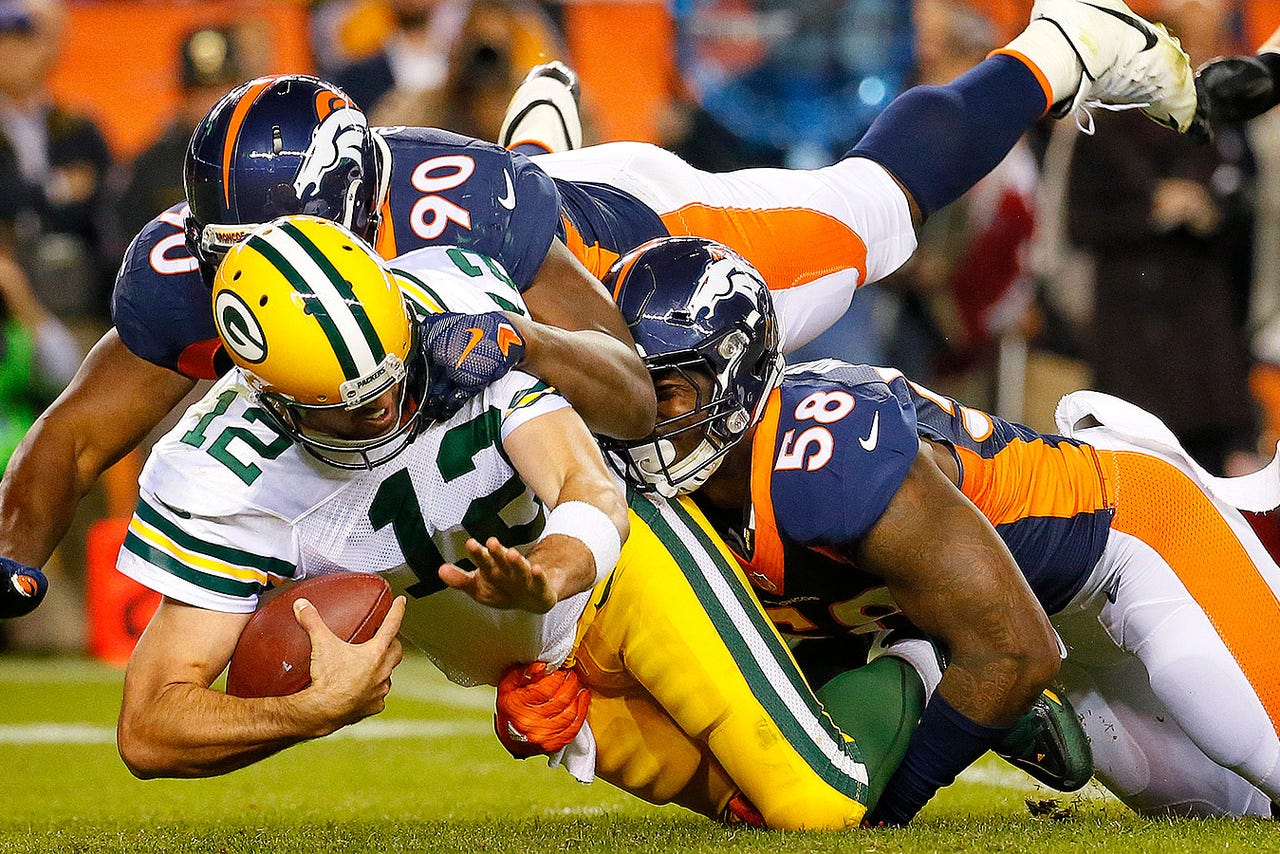 The Denver Broncos found some offense to go with all that defense, powering their way past the Green Bay Packers.

In only the fourth meeting of teams 6-0 or better, Peyton Manning tied Brett Favre's NFL record with his 186th regular-season win and Denver's defense rattled Aaron Rodgers into one of the worst games of his career in the Broncos' 29-10 victory Sunday night.

Wearing the blue jerseys they did in beating the Packers for their first Super Bowl win in 1997, the Broncos piled it on in the fourth quarter, when DeMarcus Ware sacked Rodgers and the ball ended up in the end zone for a safety.

The Broncos improved to 7-0 for the first time since 1998, when they won the Super Bowl after finishing 14-2.

The Packers (6-1) fell from the unbeaten ranks, throttled not only by the league's stingiest defense but by a quarterback who finally looked like a five-time MVP and not a creaky 39-year-old learning a new system.

Although neither quarterback threw for a touchdown, Manning threw for 340 yards on 21-of-29 passing and the bootlegs worked nicely.

"I felt we beat a good football team tonight," Manning said. "It took the whole team ... Great job by the defense."

Rodgers was 14 of 22 for just 77 yards -- the lowest of his career in a game where he wasn't knocked out by injury.

Rodgers was sacked three times and the Packers had just 140 yards of total offense to Denver's 500.

"It was just a big measuring stick for the whole team and everybody really took that to heart and stepped up to the challenge," Ware said. "Especially the offense, being able to get up on the opponent early, scoring points and us being able to slow their offense down."

Any more questions about the Broncos' worthiness as a contender or even an unbeaten?

"Compliment Denver," Packers coach Mike McCarthy said. "That's a humbling loss. I haven't had my ass kicked like that in a long time."

He added: "Gary Kubiak had his team playing a lot faster than I had my team playing tonight. That was evident early and often. I don't feel good about the way we performed. ... Very humbling loss."

Ronnie Hillman ran for two touchdowns and when he was on the sideline with a sore thigh, C.J. Anderson ran through a defense missing Clay Matthews for a 28-yard score, his first of the season, to put Denver up by two TDs late in the third quarter.

Both Matthews and Hillman returned the next series.

Also making a sudden appearance in Denver's offense were the tight ends -- as targets. Freed up from blocking with the offensive line meshing like it hadn't all season, they gave Manning an option over the middle he'd been missing since losing Julius Thomas and Jacob Tamme to free agency.

Virgil Green caught three catches for 61 yards and Owen Daniels had three for 44.

The Packers came into the game leading the league with 66 first-quarter points, but Rodgers was hit four times on Green Bay's first drive as the Broncos' pass rush hemmed him in and didn't let him loop around for his patented re-sets.

After that, he started getting rid of the ball much quicker, but those quick throws didn't lead to anything until midway through the second quarter when he drove the Packers 80 yards in 10 plays with Eddie Lacy scoring from 2 yards out to make it 17-7 at the half.

"He's a very elusive quarterback and we had to make sure he was corralled in the pocket," Ware said. "We may not be able to get the sacks, but getting the pressure and making sure that maybe he's running around in the pocket making indecisive throws, and that's what we did in the first half."

Mason Crosby's 56-yard field goal on the first drive after the break pulled the Packers to within a touchdown.

At halftime, the Broncos inducted ailing owner Pat Bowlen into their ring of fame. Bowlen, 71, stepped down from his daily duties running the team 15 months ago to fight Alzheimer's and was not in attendance. Terrell Davis, the hero of the `97 Super Bowl team that was honored before the game, said Bowlen "may not be here in body, but he's definitely here in spirit."

Packers Earn Top Seed, Henry Makes History
Plus, Jonathan Taylor carries the Colts to the postseason, and the Rams stifle the Cardinals to book a playoff spot.
January 3
those were the latest stories
Want to see more?
View All Stories
Fox Sports™ and © 2021 Fox Media LLC and Fox Sports Interactive Media, LLC. All rights reserved. Use of this website (including any and all parts and components) constitutes your acceptance of these Terms of Use and Updated Privacy Policy. Advertising Choices. Do Not Sell my Personal Info