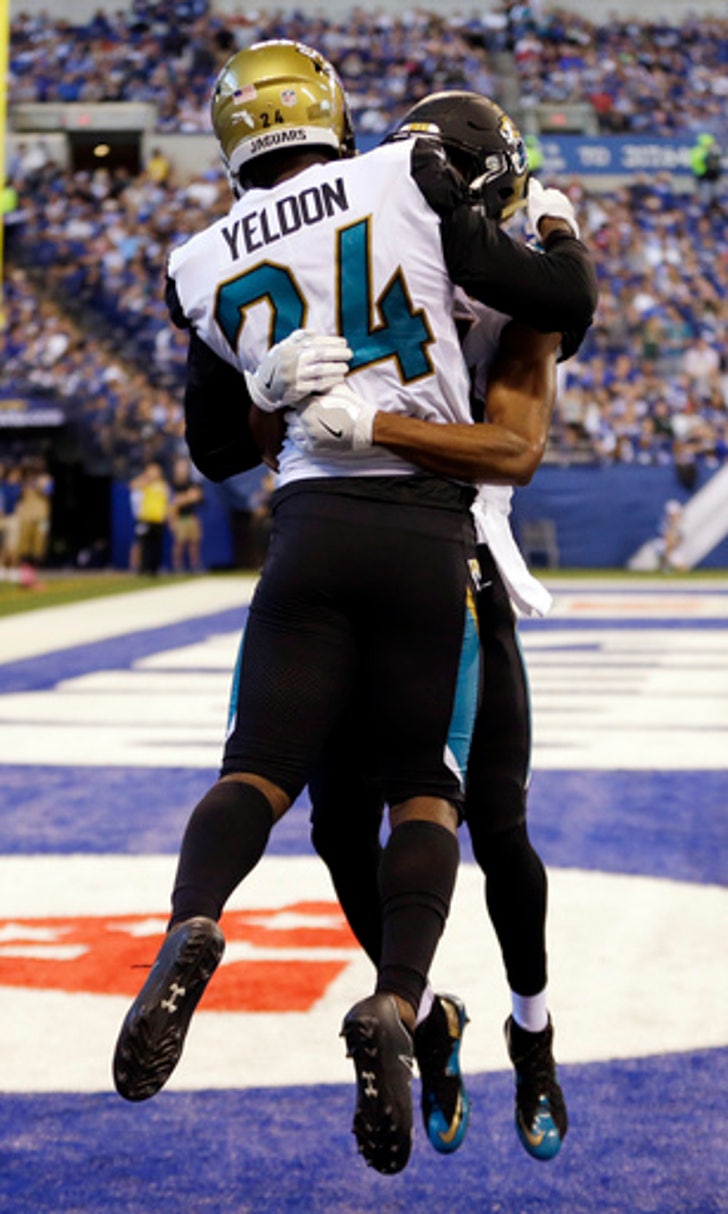 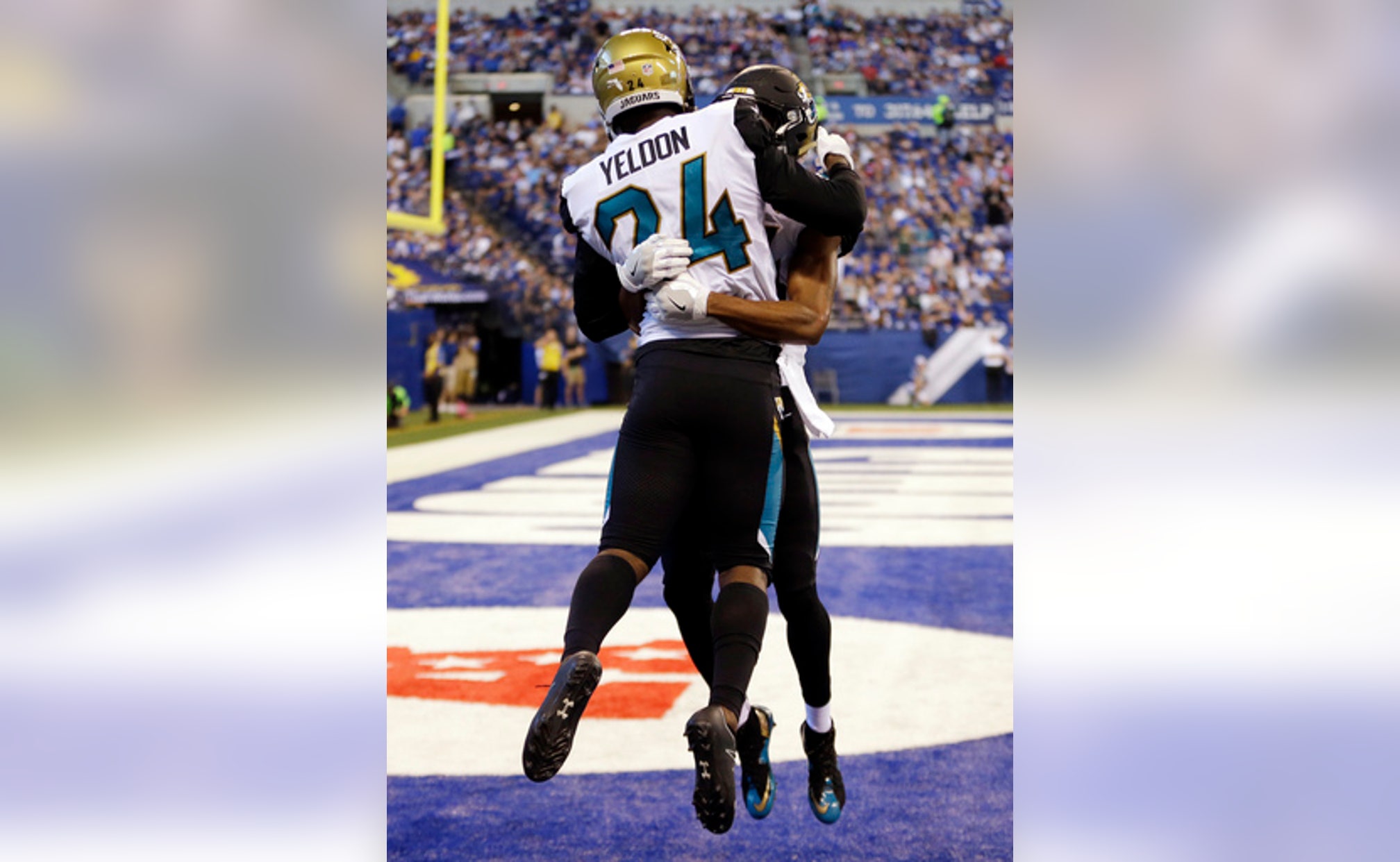 INDIANAPOLIS (AP) Blake Bortles set up the Indianapolis Colts with a curveball Sunday. The Jaguars' dominant defense finished it off with a rare shutout.

With feature back Leonard Fournette inactive, Bortles threw for a season-high 330 yards and one touchdown and the defense tied a franchise record with 10 sacks in a 27-0 drubbing at Indy.

''We obviously were able to get to their quarterback. The guys played well, guys were ready to step up,'' coach Doug Marrone said.

Under the circumstances, the Jaguars (4-3) couldn't have scripted a better combination.

They spent the week fine-tuning their deep throws, and it worked perfectly. Bortles completed first-half passes of 52, 50 and 45 yards, all longer than his previous season best of 35 yards. He wound up 18 of 26 and finished with a rating of 124.7, the fourth-highest of his career.

T.J. Yeldon, who helped fill in for the injured Fournette, ran nine times for 122 yards, including a 58-yard scoring run late in the third quarter that sealed Indy's fate. Jacksonville finished with 188 yards rushing.

And Bortles enjoyed the change of pace.

''Hopefully they keep stacking the box so we can keep doing that (throwing long). It's a little bit more fun as a quarterback to throw than to hand it off,'' he said. ''But as long as we're winning, that's irrelevant. We'll do whatever the defense shows us and play off of that.''

As usual, the Jags' defense was almost impenetrable.

While Jacksonville didn't add to its league-leading takeaway total, it matched the 10 sacks it had against Houston in the season opener, and the Jags got their first shutout since a 41-0 victory over the New York Jets on Oct. 8, 2006.

The Colts (2-5) had their only serious scoring chance snuffed out on a botched fourth-and-2 quarterback sneak at the Jaguars 6-yard line.

''This one falls squarely on my shoulders,'' coach Chuck Pagano said after Indy's second straight loss. ''Obviously, I didn't have this team prepared and ready to go.''

It was never even close.

Bortles led Jacksonville to scores on its first two possessions - getting a 1-yard run from Chris Ivory to cap the first drive and finishing the second with a nifty 5-yard TD pass to Marcedes Lewis - for a 14-0 lead. He set up new kicker Josh Lambo for two second-quarter field goals to make it 20-0.

Jaguars: Jacksonville joined the 1984 Chicago Bears and 1967 Oakland Raiders as the only teams to record 10 or more sacks twice in the same season. The Jags converted its first five third-down chances and had 518 yards in total offense compared with 232 for the Colts. ... Allen Hurns caught five passes for 101 yards. .. Calais Campbell was credited with two sacks, giving him a career high 10 this season.

Colts: Quarterback Jacoby Brissett was 22 of 37 for 200 yards. ... Frank Gore carried nine times for 34 yards, moving within four attempts of passing Barry Sanders (3,062) for No. 6 on the NFL's career list. ... T.Y. Hilton caught two passes for 27 yards after having one catch in Monday night's loss at Tennessee. The 10 sacks are the most in the Colts' Indianapolis era. ... It marked the first time Indy was shut out in a regular-season game since Dec. 26, 1993, against New England, ending the third-longest streak without a shutout in league history at 375 games.

Jaguars: Fournettte sat out with a sprained right ankle and starting center Brandon Linder was inactive with an illness. Left tackle Cam Robinson did not return after injuring his left ankle on the second play of the game. Marrone didn't have an immediate update after the game.

Colts: Indy lost three defensive starters - cornerback Rashaan Melvin (concussion), inside linebacker John Simon (stinger), safety Malik Hooker (right knee) in the first half. None of the three returned. Starting center Ryan Kelly (hamstring) left in the in the second half and also did not return. Hooker is scheduled to have an MRI done on the knee after he refused to get on the golf cart before halftime.

Jaguars: ''I've never really even thought about it. The W's is all I care about, getting that W. When you get sacks along the way, it all helps.'' - Campbell, referring to their second 10-sack day of the season.

Colts: ''There's something wrong with us? People lose all the time. We have to play another day.'' - Brissett.

Jaguars: Host Cincinnati on Nov. 5 after getting a bye next week.

Colts: Will try to snap a two-game losing streak when they visit Cincinnati next weekend.