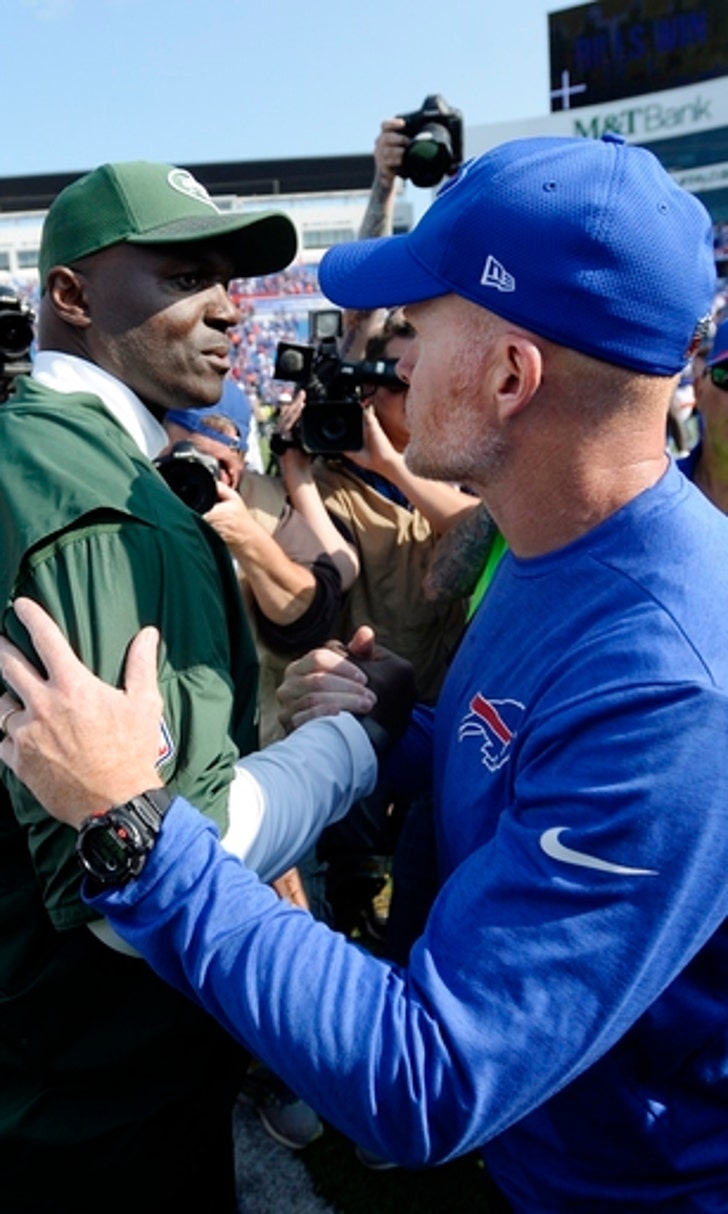 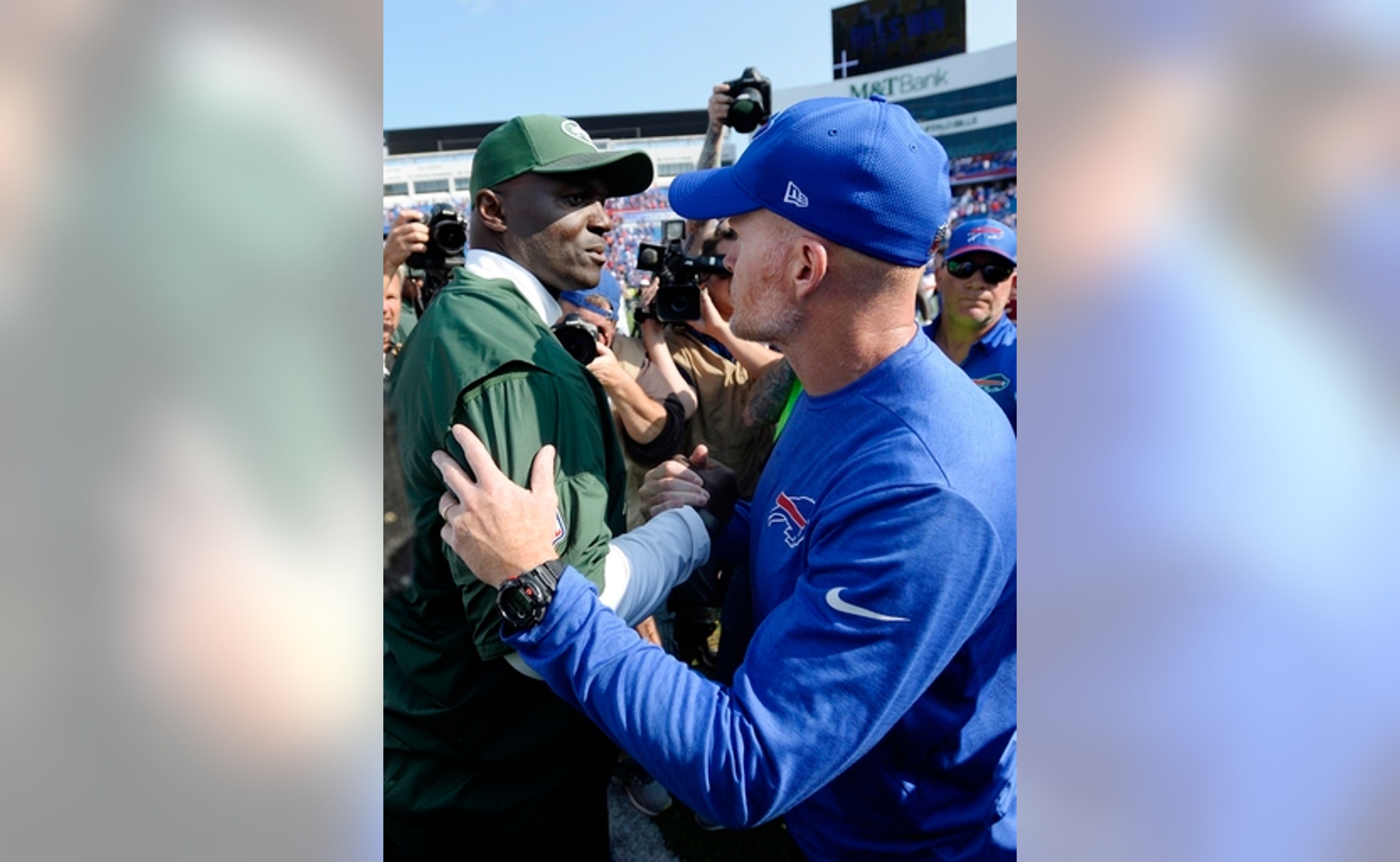 Bills have prime-time chance to sway more skeptics vs. Jets

EAST RUTHERFORD, N.J. (AP) The Buffalo Bills have been one of the NFL's biggest surprises of the season's first half, despite what looked like an all-out rebuild in another potentially dismal year.

Sean McDermott's resilient squad has a chance to turn many more skeptics into believers - or at least, intrigued onlookers - on a prime-time stage against the slumping AFC East-rival New York Jets on Thursday night.

''When you know everyone's watching you, you look forward to those moments,'' quarterback Tyrod Taylor said. ''Even with the short week, guys are preparing hard and looking forward to this opportunity to show the other team what we can do, but as well as show people that are going to be watching, everyone's going to be tuned into Thursday Night Football, to show that this team is real.''

The Bills (5-2) are a half-game behind New England for first place in the AFC East . With a victory over the Jets (3-5), Buffalo would clinch its best first half to a season since the 1993 squad with Jim Kelly, Thurman Thomas and Bruce Smith opened 7-1 and made it to last of the franchise's four straight Super Bowls.

The Bills' two losses this season have been by a combined 10 points: 9-3 at Carolina and 20-16 vs. Cincinnati. Buffalo also has yet to trail by more than seven points.

''They're tough, they're disciplined,'' Jets coach Todd Bowles said. ''They run the ball very well. The quarterback's taking care of the football. The biggest thing: They don't turn it over and they're getting turnovers. They're playing good football.''

That's despite a massive roster overhaul in the offseason; the churning continues. The Bills traded defensive tackle Marcell Dareus to Jacksonville last week, and then acquired wide receiver Kelvin Benjamin from Carolina for draft picks on Tuesday.

They remain a collection of patchwork, no-name players - both young and journeymen - who are playing well above expectations. And so far, that's been good enough to mostly win.

''There's been a different guy, and that's pretty much been the story of our team this whole year, offense and defense,'' Taylor said.

Here are some other things to know about Thursday night's matchup:

GROUNDED JETS: After getting off to their own surprising start, the Jets have sputtered lately with three consecutive losses following a three-game winning streak.

New York has jumped out to a lead in all three defeats, but blew fourth-quarter advantages in the last two.

''I'm angry that we lost those games and I know everyone else is angry, because it's frustrating,'' tight end Austin Seferian-Jenkins said. ''We're frustrated, the fans are frustrated. It's just tough because you see those flashes and you're like, `Wow!' We just need to sustain those flashes.''

TOUGH ROAD: Things don't get any easier for Buffalo after this one, with a schedule that could define its season.

The Bills' star running back had 110 yards rushing and 159 yards from scrimmage in Buffalo's opener against the Jets before combining for 169 in his next four games. But in the two games since coming out of the bye, McCoy has run for 242 yards - including a season-high 151 against Oakland - and three TDs.

The Bills revamped their blocking scheme during the bye week, and left tackle Cordy Glenn, previously bothered by injuries to both feet, has also started the past two games.

''Any time you can get Shady going in the running game, it opens up things in the passing game for me,'' Taylor said, ''as well as it gets his confidence going.''

NO JOSHIN': Bowles is in no hurry to pull McCown to get a look at youngsters Christian Hackenberg and Bryce Petty.

The 38-year-old veteran QB is quietly having a solid season, becoming the first player in franchise history with multiple TD passes and a completion percentage of 60 percent or better in four consecutive games. McCown's 70.5 completion percentage ranks second in the NFL among passers with 100 or more attempts, behind only New Orleans' Drew Brees (70.6).

NEW GUYS: It's uncertain whether Benjamin will be available to play against the Jets, but he has familiarity with McDermott, who was Carolina's defensive coordinator from 2011-16.

New York also hasn't been not sure if cornerback Rashard Robinson, acquired Tuesday from San Francisco for a fifth-round draft pick , will be ready to suit up.