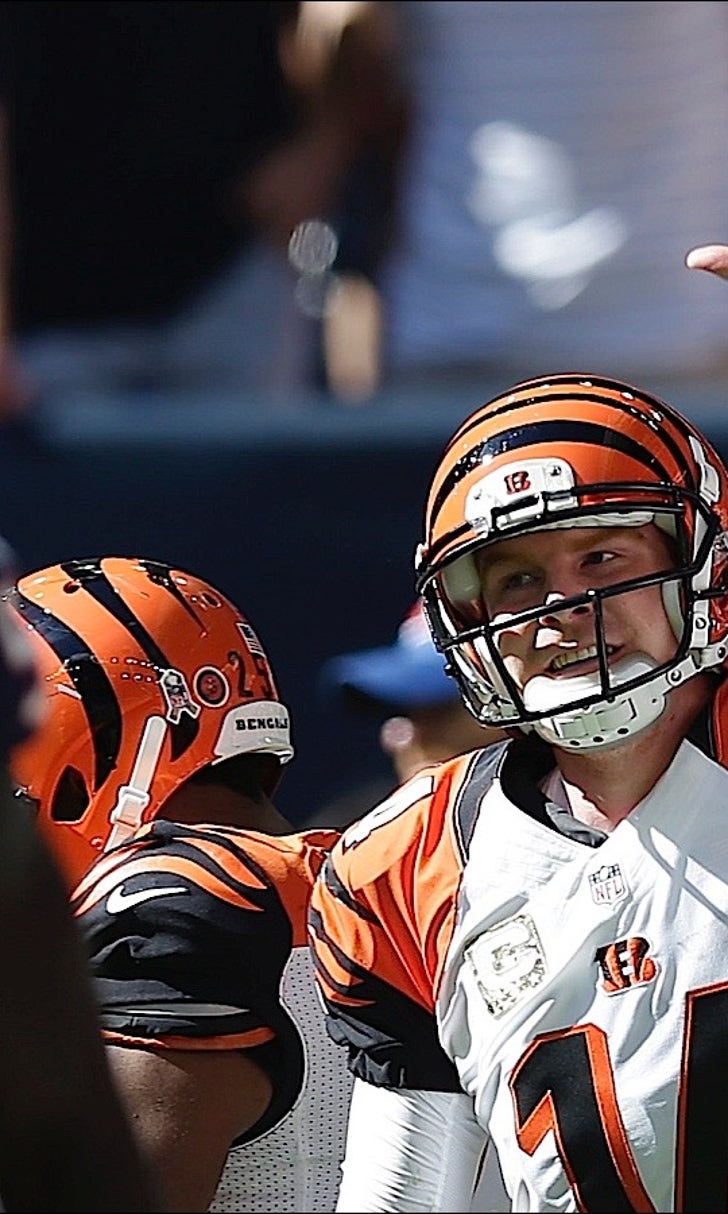 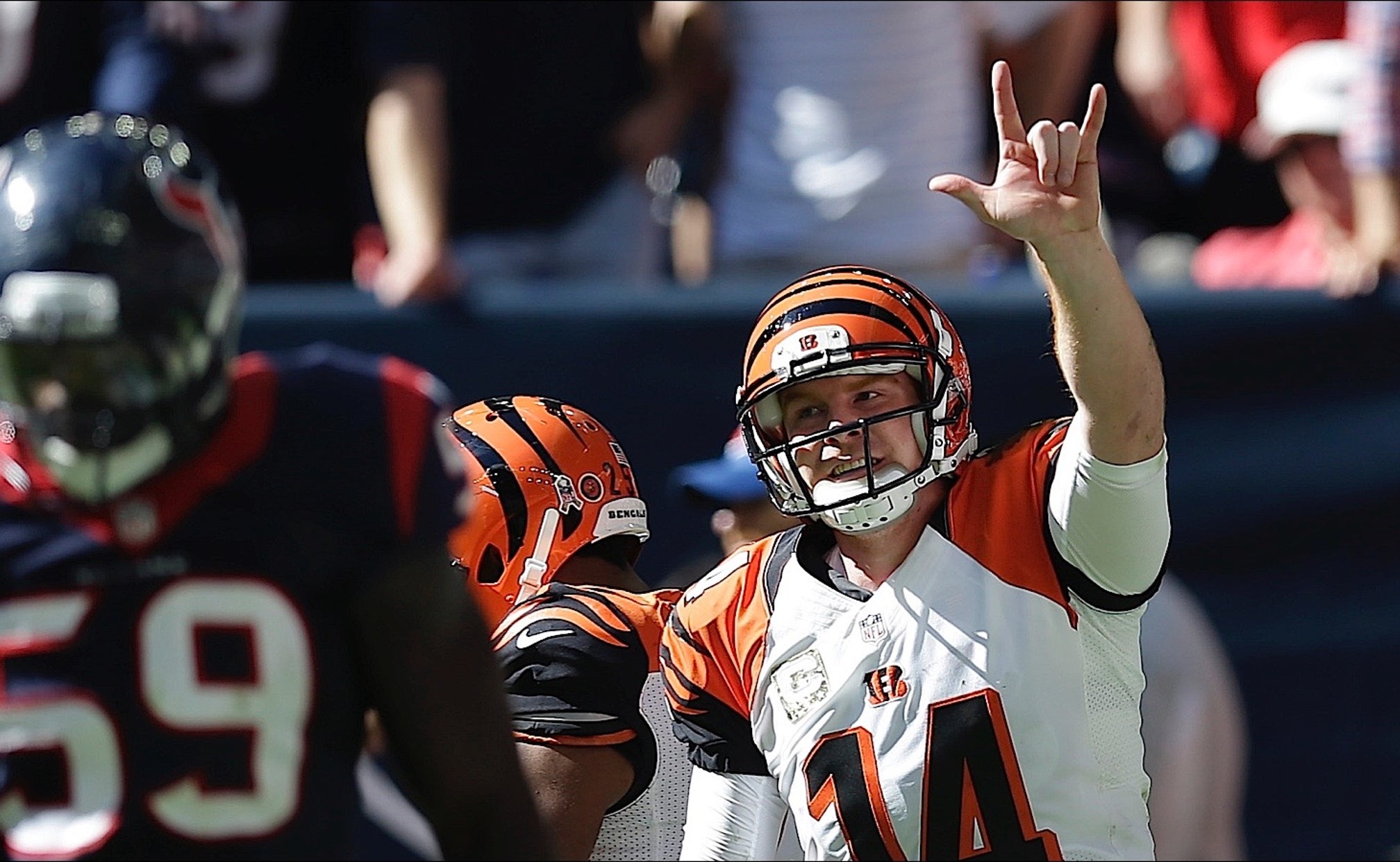 Andy Dalton gave his father Greg a special 55th birthday present by finally getting a win in his hometown.

Dalton lost his first three games against the Houston Texans, including twice here in the playoffs, but threw for 233 yards and a touchdown to lead the Cincinnati Bengals to a 22-13 win on Sunday.

"It's cool to get a win here," Dalton said. "(And) have it timed up where we were playing in Houston on his birthday. It's a special day."

Dalton got to chat with his father for a couple of minutes on his way off the field.

"He said `It was an awesome birthday,'" Dalton said. "I'm glad we got to have that moment."

And for the first time in his career Dalton said he'd give the jersey from Sunday's game to his dad.

The victory is Cincinnati's second straight to keep the team in first place in the rugged AFC North.

It was Dalton's second strong game and he again relied on A.J. Green, who is healthy after dealing with a toe injury. Green finished with a career-high 12 receptions for 121 yards against a secondary playing without cornerback Kareem Jackson (knee).

"It's just one of those days man when you just feel in synch -- the whole offense," Green said. "Our running game really helped us out to keep me one on one a lot. It was nothing special."

The Bengals (7-3-1) led throughout, but Houston (5-6) cut the lead to 3 late in the third quarter before Cincinnati tacked on two field goals in the fourth quarter to secure the win.

"All day long, they got the ball out of their hands very quickly," J.J. Watt said. "It doesn't matter what you do up front when they get the ball out that quick."

Rookie Jeremy Hill scored on a 2-yard touchdown run early in the third quarter after an interception by Ryan Mallett for Cincinnati's only touchdown of the second half.

Mallett struggled in his second career start, finishing with 189 yards passing and often overthrowing open receivers. He wasn't sure why he was so off-target on Sunday after a solid outing in a win over Cleveland last week.

"I didn't play well," Mallett said. "I couldn't hit the broad side of the barn from 5 yards away."

Houston's only touchdown came on a 60-yard interception return by Johnathan Joseph in the third quarter.

Giovani Bernard had 45 yards rushing after missing the past three games with an injured shoulder and hip. But Hill still got plenty of carries, running 18 times for 87 yards.

Dalton threw two incompletions in a row to bring out Mike Nugent for a 31-yard field goal to push the lead to 19-13 in the fourth. Nugent added a 49-yard field goal with less than two minutes remaining.

The Texans had a first down at the 8-yard line, but their offense stalled after that and they settled for a 25-yard field goal by Randy Bullock to get within 16-13 late in the third.

Joseph grabbed an interception and dashed 60 yards -- high-stepping the last 5 -- for a touchdown to cut the lead to 16-10 midway through the third quarter.

Rey Maualuga intercepted Mallett on the first play of the second half to give the Bengals the ball at the Houston 22. Hill had five carries on the next drive capped by a 2-yard touchdown run to make it 16-3 early in the third.

Mohamed Sanu grabbed a short pass from Dalton and dragged A.J. Bouye into the end zone for a 6-yard touchdown that gave the Bengals a 7-0 lead in the first quarter.

Dalton's pass to Green on fourth down from the 1 was incomplete in the second quarter. It didn't matter much though, as Geno Atkins tackled Blue in the end zone on the next play for a safety to make it 9-0.

The Texans had trouble getting things going on offense and they had to punt on their first two possessions before the safety on the third one.

NOTES: Bengals right tackle Andre Smith injured his left biceps in the first quarter and didn't return. Smith said he'll get an MRI, but didn't provide any other details on the injury. ... Andre Johnson had three receptions to pass Randy Moss for 10th on the career list with 985.

Don't Count Out The Cowboys
Fans have a chance to win $1 million this week. And Jason McIntyre believes Dallas has a chance to prove the doubters wrong.
3 hours ago