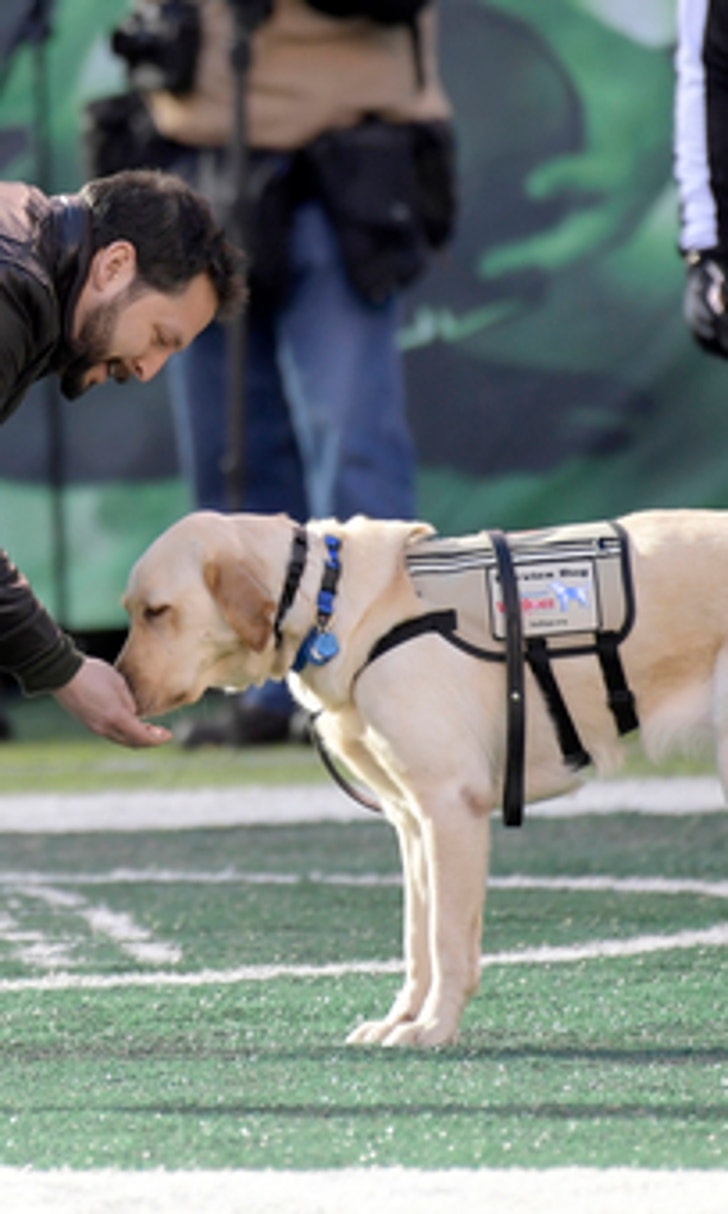 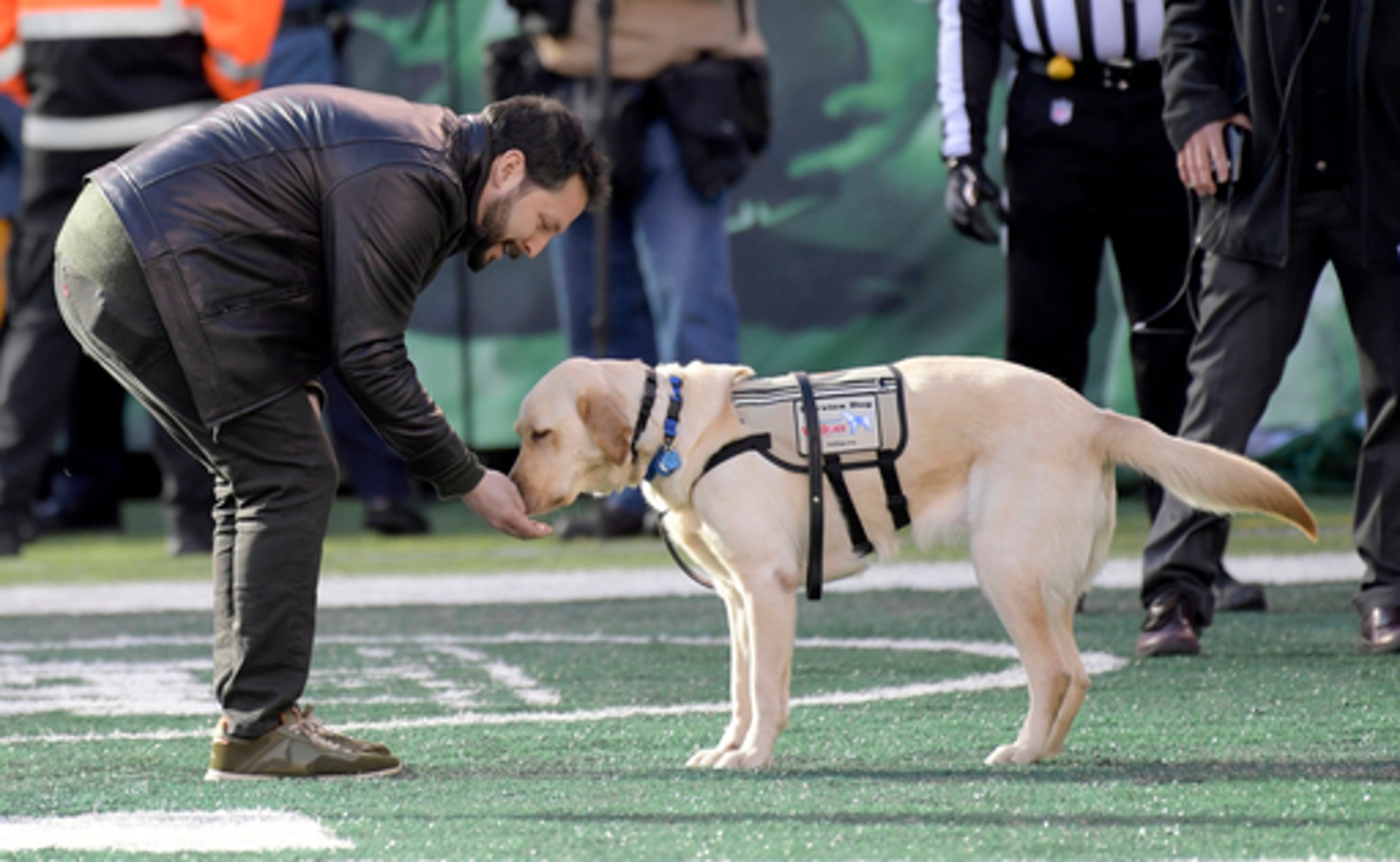 A U.S. Army veteran left a football game with a new best friend.

The New York Jets partnered with America's VetDogs to present a veteran named Rodney with a service dog during the first half of their game against the Carolina Panthers last Sunday as part of the team's ''Salute to Service'' events.

Maggie, a yellow Labrador Retriever, greeted Rodney - who asked that his last name be held for privacy reasons - in an end zone to lots of cheers from the crowd at MetLife Stadium. The former soldier, who was a Sergeant First Class and has various military commendations including a Bronze Star, spent a few moments petting Maggie before walking off the field with her.

The Jets donated $25,000 to co-sponsor Maggie, who was raised and trained by America's VetDogs to help veterans deal with the effects of combat-related post-traumatic stress disorder. According to a release issued by the team, Maggie has specific skills, such as being able to turn lights off and on, provide nightmare interruption retrieval, and give comfort in social situations.

Service dogs cost more than $50,000 to be raised and trained over a two-year period, and then matched with a military veteran who has disabilities. The Smithtown, New York-based America's VetDogs provides its services at no cost through contributions from various sources.

WING MAN: For all the adventures and exotic places he's visited, the ever colorful Rob Gronkowski still has a few things to check off his bucket list.

Growing up in suburban Buffalo, the New England Patriots tight end said he's a big fan of wings, and tried many spots around town. The one Gronkowski said he hasn't yet patronized is Duff's, whose wings are generally regarded as being among the best in Buffalo.

''Everyone always says Duff's or Anchor Bar, but I've never been to Duff's in my life, which is so crazy,'' Gronkowski said during a conference call with Buffalo-area reporters in advance of the Bills (6-5) hosting the Patriots (9-2) on Sunday. ''So I actually want to try Duff's.''

His favorite place is the Amherst Ale House, though Gronkowski acknowledged most any corner spot has good wings.

It's considered taboo in Buffalo to serve wings with anything but bleu cheese.

Gronkowski broached the topic of wings when discussing how he's adopted some of Patriots quarterback Tom Brady's workout and nutritional methods. That doesn't mean going cold turkey on wings.

TOUCHDOWN JIMMY: The Seattle Seahawks have finally figured out how to use tight end Jimmy Graham in the red zone: play basketball.

Graham is on a run of touchdowns unlike any other point in his three seasons with the Seahawks. Graham leads NFC tight ends with eight TDs, six coming in the past five games. It's the best stretch of touchdowns for Graham since 2014 with New Orleans, when he also had a stretch of six TDs in five games and finished the season with 10 touchdown catches.

Seattle has made Graham its primary passing target inside the 10-yard line. Usually the Seahawks try to get Graham in one-on-one matchups with smaller defensive backs and let him use his size to either post up the defender or outleap them on a jump ball. Last week against San Francisco was a new wrinkle: The Seahawks used motion to get Graham into a one-on-one matchup with no help. Graham ran a quick slant and easily caught a 1-yard TD pass from Russell Wilson.

''I have to find ways to get him the football. It's not just him, it's everybody, but I think that he really stands out. He can do some special things,'' Wilson said.

MUTUAL ADMIRATION: Carson Wentz has fans everywhere, including the NBA.

Before the Cleveland Cavaliers beat the Philadelphia 76ers on Monday night, LeBron James told reporters Wentz is his favorite player.

''I just love the way he plays the game,'' James said. ''The way that he's able to get to progressions throughout the course of a three-step drop or a five-step drop, and if everything breaks down, his ability to run, get outside the pocket, either make passes or get yards with his feet. He's a very smart player from the outside looking in, obviously, and they've got a really good team.

The second-year quarterback has led the Eagles to a 10-1 start and leads the NFL with 28 touchdown passes . He's also leading the voting for the Pro Bowl.

''It's pretty cool,'' Wentz said about praise from James. ''Ton of respect for a guy like LeBron. I was a kid watching him tear up the league when he was a rookie. I love watching that guy play. He's unbelievable, quite the talent, one of the most impressive athletes in the world. It's pretty humbling to hear that stuff.''

GRATEFUL GRIFFEN: Minnesota defensive end Everson Griffen , who entered the week tied with Arizona's Chandler Jones with an NFL-leading 12 sacks, was especially grateful after a Thanksgiving Day victory by the Vikings at Detroit.

His third son was born about a month early, shortly before kickoff against the Lions. The unexpected labor left Griffen unable to return to Minnesota in time for the birth, so he watched via FaceTime from Ford Field. Then he went out and sacked Matthew Stafford twice.

After the first one , in the second quarter, Griffen pulled down his undershirt from behind his jersey to reveal for the national TV audience a message scrawled in marker: ''I just had a baby boy. What should I name him?''

Naturally, the wise-guy crowd on social media, offered suggestions like ''Thunderbolt'' and ''Mike Zimmer'' and ''Zygi Wilf.'' But Griffen and his wife settled on Sebastian.