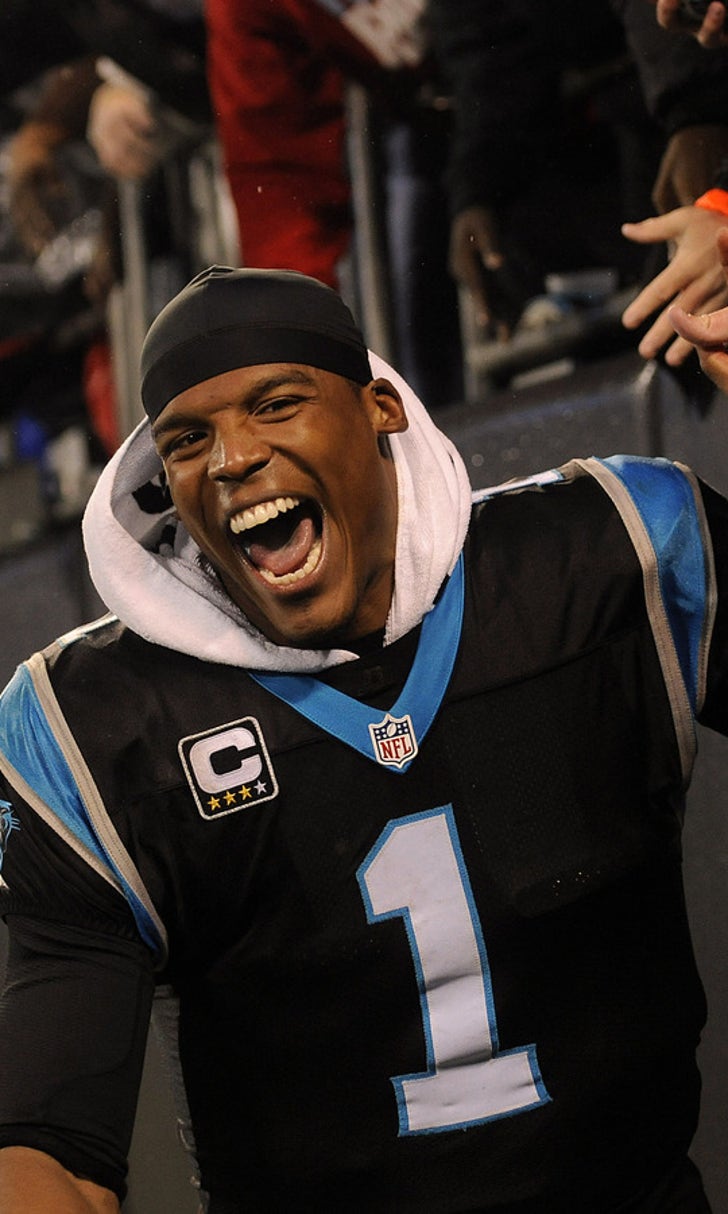 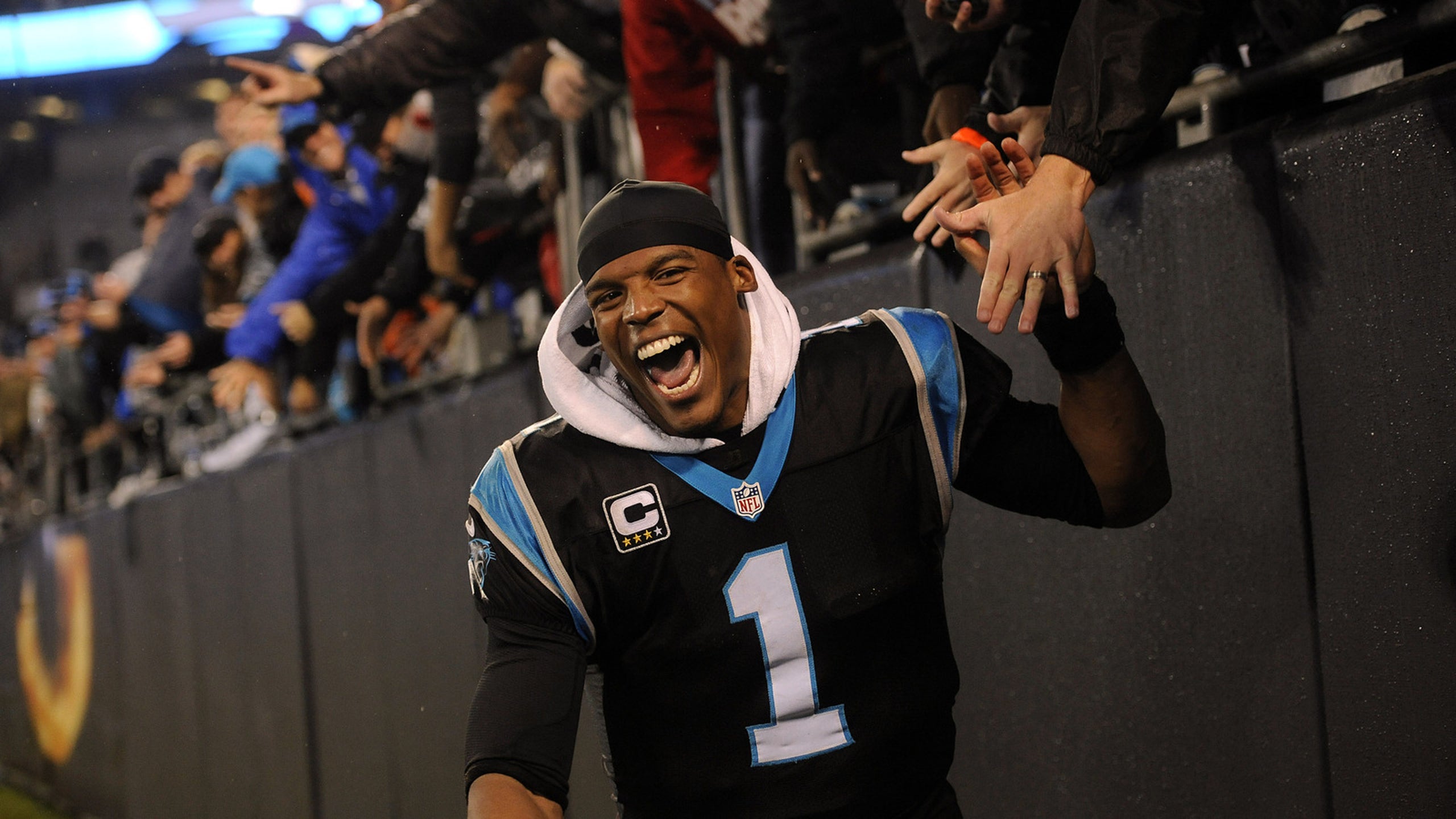 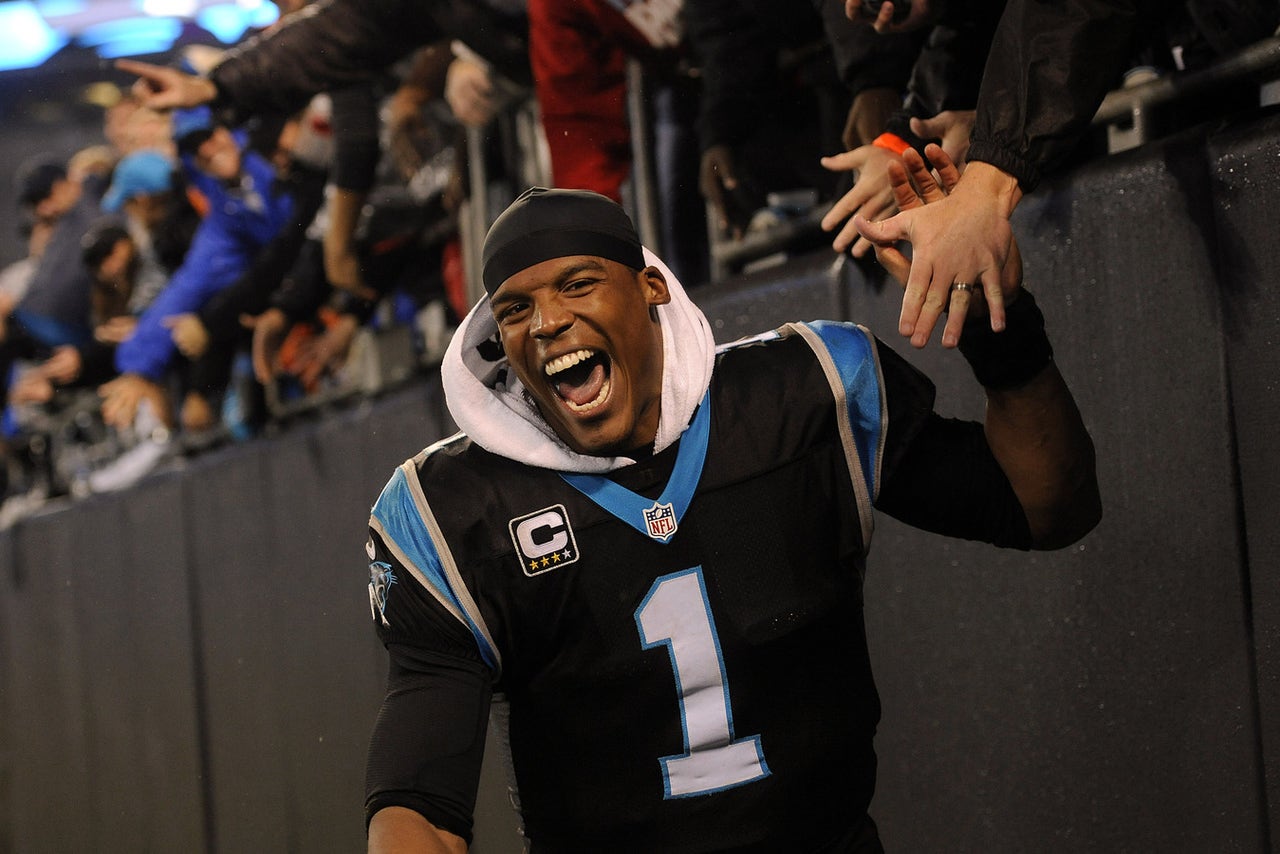 The Carolina Panthers are a hot topic of debate among many NFL circles. The team has gotten off to a flawless 7-0 start, and yet there is something about the team and their brand of football that leaves many doubting their ability to contend for a Super Bowl spot this year.

There can be no denying that the Carolina Panthers have performed very well defensively, ranking 10th in both points scored and yards against. However, there are a few other team attributes which people claim aren't up to snuff. Here's my take:

To put it nicely, the Panthers' passing game stinks. A big reason for that is because they lack talented receivers. Their wideouts consist of players like Ted Ginn Jr., Philly Brown, Devin Funchess, Jerricho Cotchery, and Kevin Norwood. If they didn't have Greg Olsen at tight end, then there is no doubt that this would be the worst group of pass catchers in the league.

But the passing woes don't fall solely on the shoulders of the wide receivers, as quarterback Cam Newton holds some of the blame as well. Newton has the only 26th best QBR in the league, a completion percentage of 54% (32nd in the NFL), and either overthrows or under-throws his receivers on 23.7% of his throws (third most in the NFL).

All of these factors combined have led to the Panthers being the 29th ranked passing offense in the league. Looking at the last 20 Super Bowl winners, 29th best in the passing game just doesn't seem to fit. 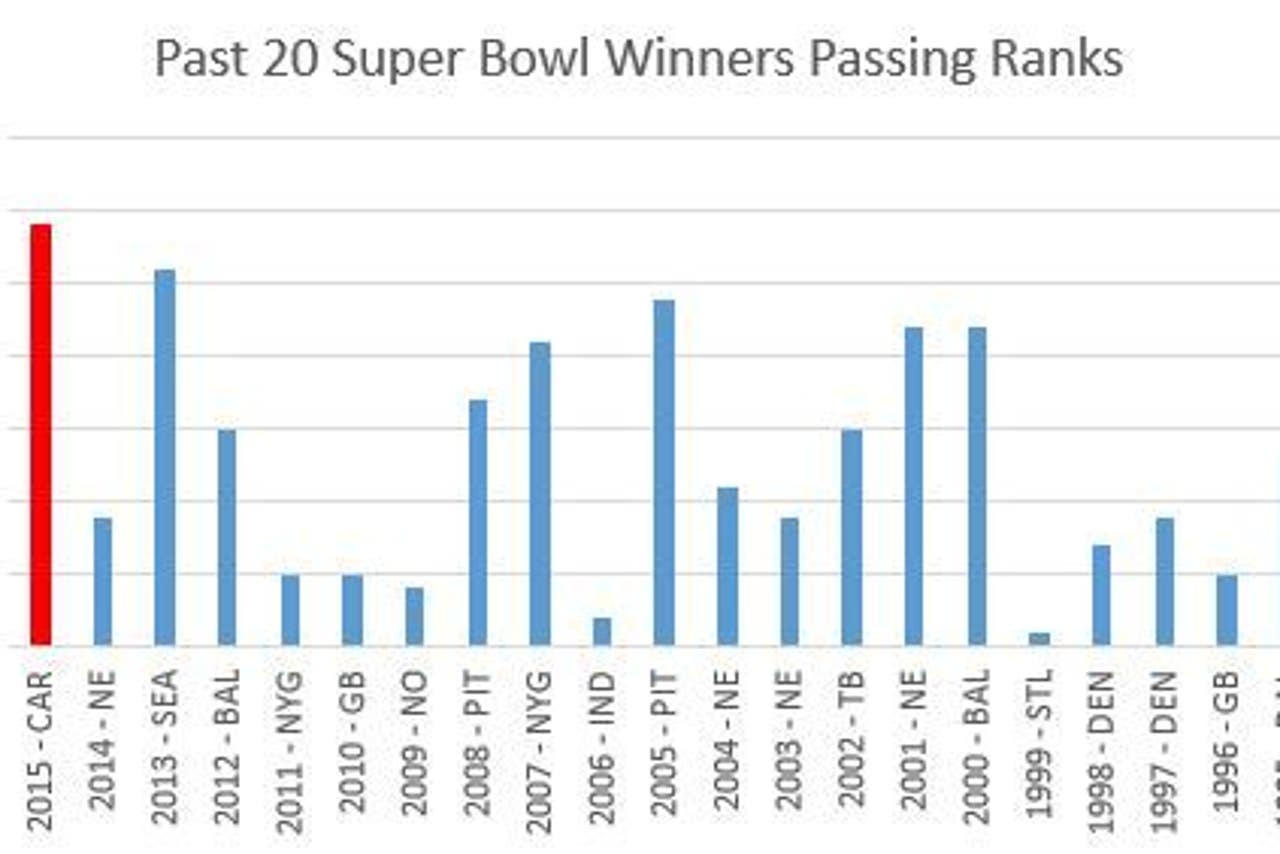 Now on this graph, a smaller bar means a better passing ranking. You can see that this year's Panthers squad is worse than any team in the past 20 years in the air. Over those 20 years, teams have on average been ranked 12th in passing and the median has been 10th. 70% of Super Bowl winning teams have been in the top half of the league in passing offense, and 95% (all but the 2013 Seattle Seahawks) have been ranked in the top three quarters.

And for Panthers fans who want to hang their hats on the 2013 Seattle squad as proof that it can be done, those Seahawks were a different animal. That year, they were ranked first in almost every major statistical defensive category. The Panthers have been solid, but are nowhere near the record setting defense of the 2013 Seahawks.

2. How has the Panthers schedule contributed to their success?

The answer to this question is unfortunately not satisfying. The Panthers have played the 27th hardest schedule in the league this year. Of the other three undefeated teams, Green Bay, and Arizona, the group I consider to be Carolina's main competition, only Arizona has had an easier schedule.

Obviously you can't fault the Panthers for having an easy schedule. It is what it is and you have to play and beat the teams that you face. The Panthers have done that. Yet it is impossible not to take note that they've gotten to be 7-0 through a trail that contained the likes of Blake Bortles, Ryan Mallet, Luke McCown, Jamies Winston, Russell Wilson, Sam Bradford, and an injured Andrew Luck.

This needs to be considered because their opponents in the playoffs and, if they are lucky, the Super Bowl will be much, much tougher.

3. Will the Panthers' rushing offense succeed against better teams?

The Panthers are the No. 1 ranked rushing offense in the league. Given their struggles with the pass and their undefeated record, the offense had to be coming from somewhere. However as previously mentioned, the Panthers haven't really been playing the cream of the crop, and the teams they have faced on average rank 17th according to Pro Football Focus' Rushing Defense Ranking.

When looking at the rest of the teams atop the NFL right now, there is some hope for the Panthers. 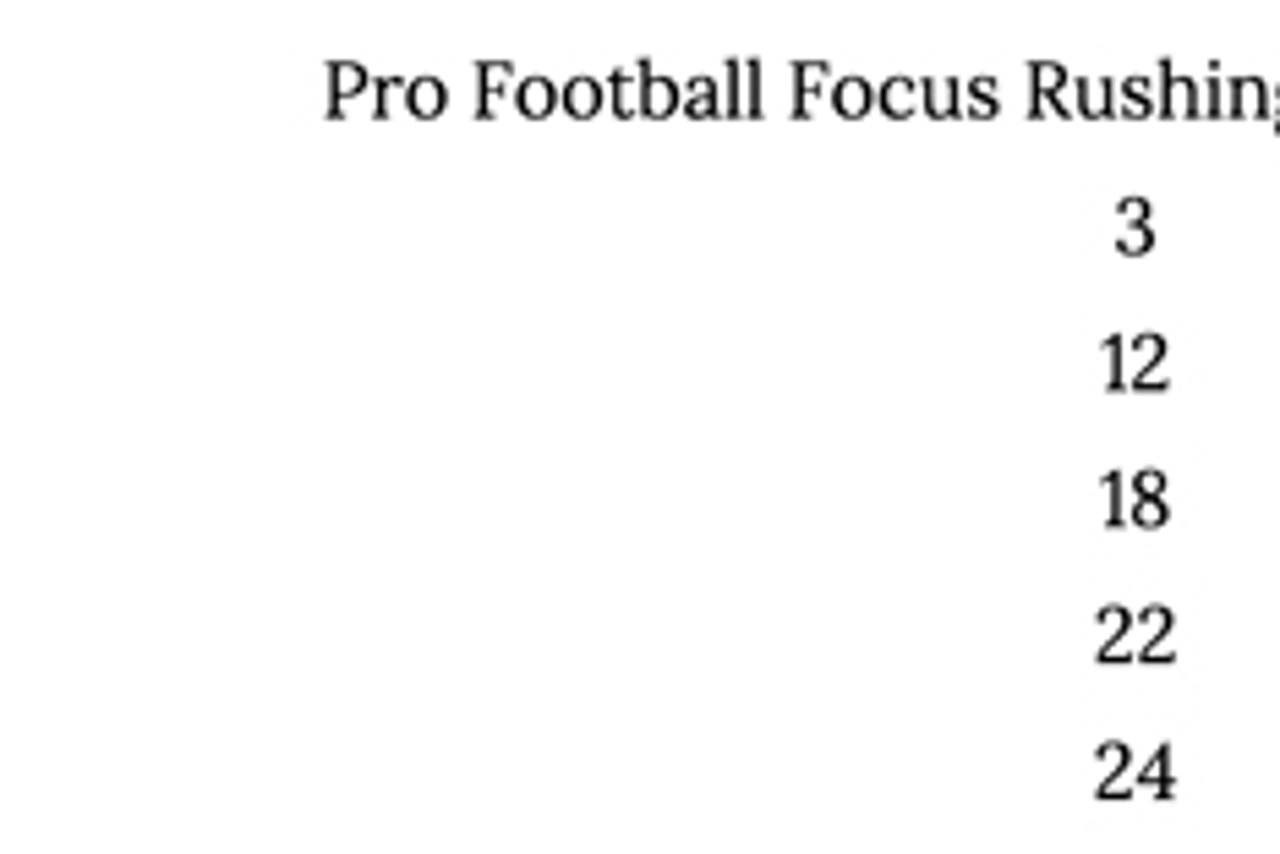 Only the Broncos and Cardinals are ranked in the top half of the league in rushing defense. The average of these five teams in only one slot higher than that of the teams that Carolina has already played. This leads to the conclusion that although there could be a tough game here or there, against the top teams in the NFL, the Panthers should be able to run the football.

So, will Carolina be winning it all this year?

My bet would be no. Although there is some hope that Carolina can continue to run the ball at the pace they have all year, they just lack the firepower in the passing game that has historically been seen by Super Bowl champions. Their defense is not at a level where they can afford for this to be the case.

And none of this uncertainty is helped by the fact that the Panthers have yet to really face a competent team. Although this will not be the case for long as they are scheduled to take on the Green Bay Packers this weekend. This game should go a long way towards figuring out the puzzle that is the Carolina Panthers and whether or not they can seriously contend.