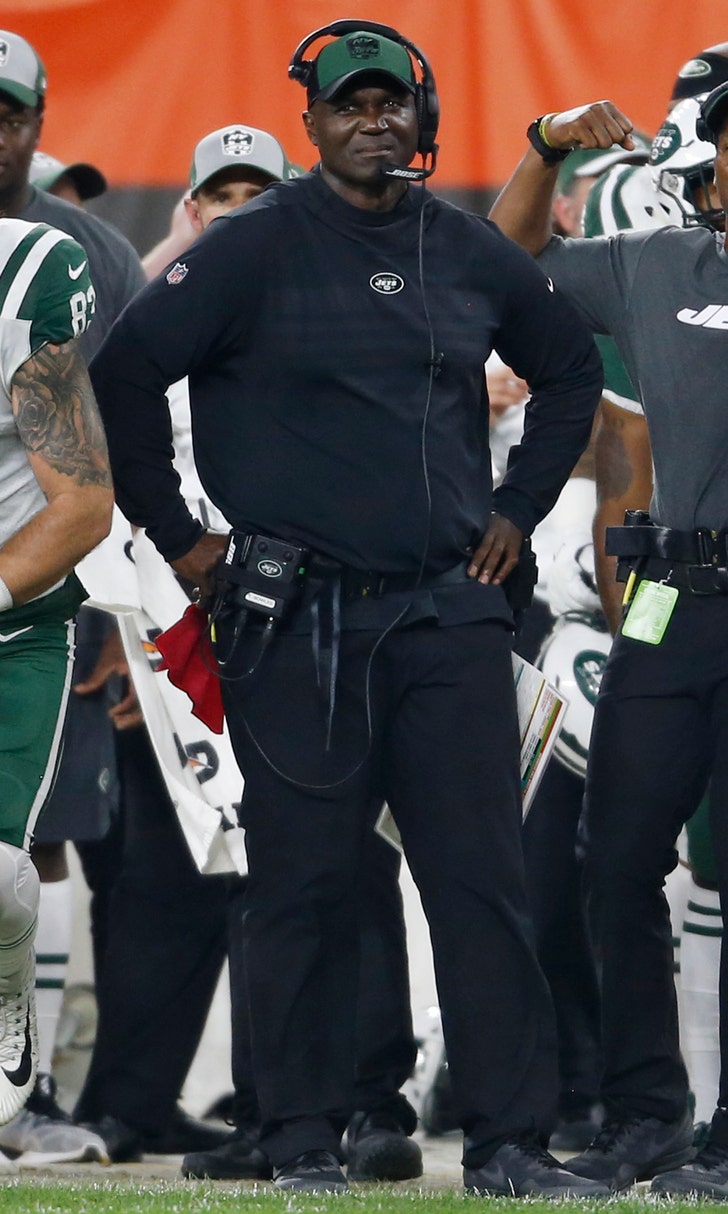 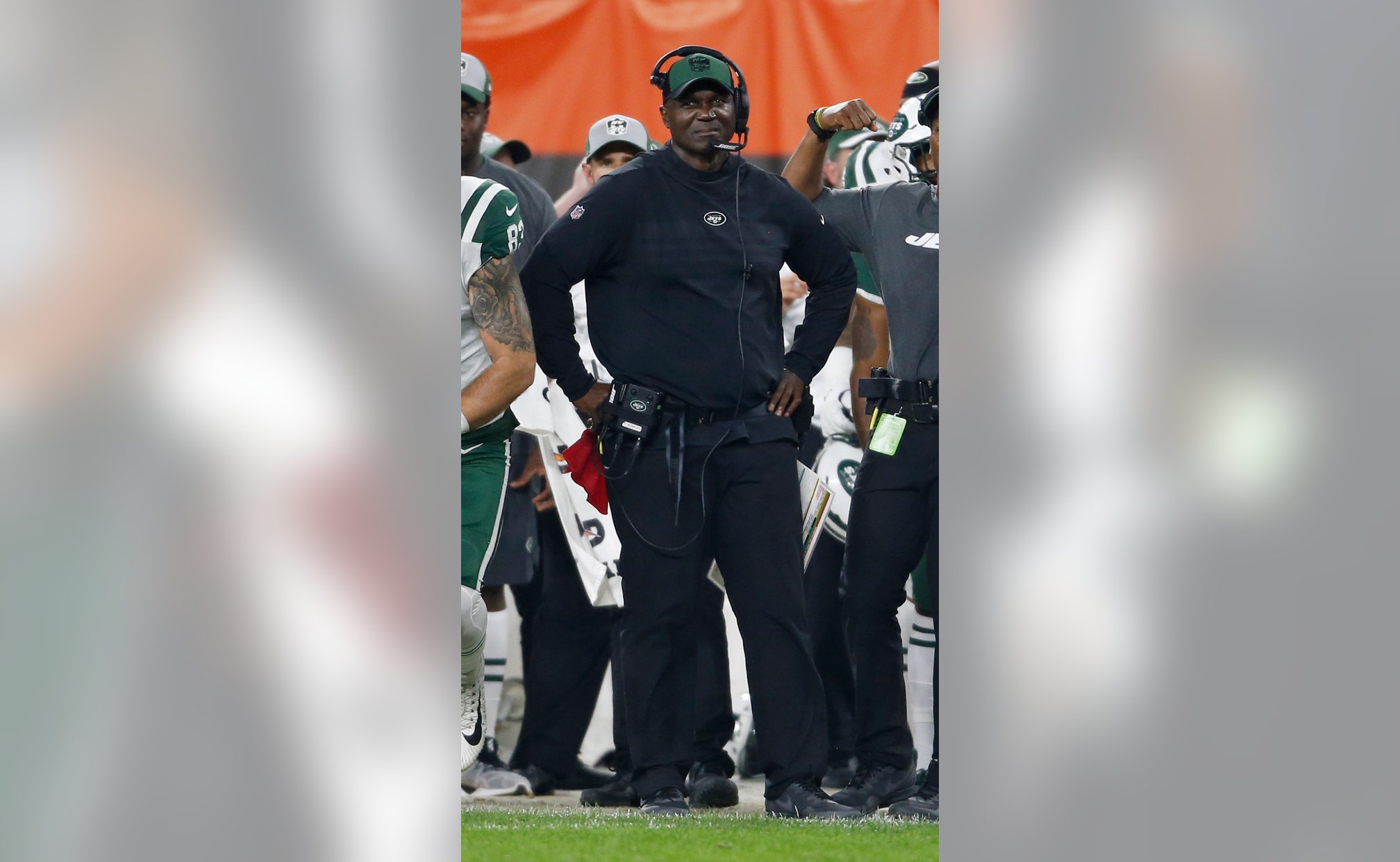 FLORHAM PARK, N.J. (AP) — Todd Bowles was clearly angry, even if his voice never rose above its usual low tone.

"(It's) 100 percent false," Bowles said Wednesday. "Completely a lie. If somebody said it, it didn't come out of my mouth."

The New York Daily News reported Tuesday that Bowles , according to sources, would call the defensive plays when the Jets face two-minute and hurry-up situations. Bowles is a former NFL defensive coordinator who is also close friends with Rodgers.

New York ranks eighth in overall defense, including seventh against the pass, but has struggled in some key spots in its last two losses to Miami and Cleveland. Against the Browns, Baker Mayfield shredded the Jets in a two-minute situation before halftime. The Daily News reported that Bowles would himself try to improve the defense in that area.

Bowles added that Rodgers will continue in his current duties of running the entire defense.

It was a surprising display of controlled anger from Bowles, who very rarely shows any emotion during his news conferences.

"I'm pretty much a straight shooter," Bowles said. "If I've got something to say, I would probably say it and it would come out of my mouth. It never came out of my mouth. It never happened. End of discussion. It never happened, it's not going to happen. If I want to take the play calling or call something on the offense, I have that prerogative to do it as a head coach. I never did any of it."

That wasn't the only controversy facing Bowles as the Jets (1-2) prepare to take on the Jaguars in Jacksonville on Sunday.

During his weekly radio spot on WFAN on Tuesday, safety Jamal Adams suggested the Jets weren't prepared to face Mayfield when Tyrod Taylor left with a concussion.

"To be honest, man, we had to be open to knowing that Baker could come in, but we were prepared for Tyrod," Adams said during the interview. "When Baker came in, obviously, we didn't have a game plan for him. But hats off to him. He came in, and he definitely played lights out. And they gained momentum, and we just couldn't grab it back."

Adams added that the Jets didn't foresee Mayfield playing against them.

"We weren't prepared for him," he said. "They're very similar guys, in ways that they can move the pocket and throw the football. So at the same time, man, we stuck to our game plan."

Adams' comments fueled criticism from fans and media aimed at Bowles for failing to plan to potentially face Mayfield, even though New York had just three days to prepare for the game last Thursday night.

"Yeah, let's clear that up," Adams said Wednesday in the locker room. "If you listen to the interview, it tells you everything I said. I simply said we prepared for Tyrod. Obviously, he went down with the injury. We didn't know that at the time. Baker came in. He had energy. He had confidence. I did not say the coaching staff never had us prepared for two quarterbacks. I did not say that. We're going to end it at that and we're going to move on."

Bowles downplayed Adams' comments, calling them a "teachable moment" after speaking with the second-year player.

"He misspoke," Bowles said. "He didn't mean it, and he's a young player. Part of having a young player as a leader, sometimes he's going to have growing pains."

Bowles said he had no reaction when he first heard what Adams said. He also declined to elaborate on what Adams specifically meant with his comments, saying he's not trying to make any excuses.

The comments had some wondering, however, whether Bowles was cast in a negative light and whether the incident exposed a potential disconnect between the coach and players.

NOTES: S Marcus Maye (ankle/foot) was limited at practice, marking the first time this season he participated in team drills. He's hoping he might make his season debut at Jacksonville. "Just trying to be out there with the guys and knowing you can help out and you can't is definitely frustrating," Maye said. "So if I get the opportunity this week to get out there, that will definitely be a positive thing." ... OLB Josh Martin (concussion) was also limited after not practicing since being injured in the third preseason game. ... CB Buster Skrine (knee), TE Neal Sterling (concussion), WR Charone Peake (hamstring) and S Doug Middleton (knee/finger) did not practice.