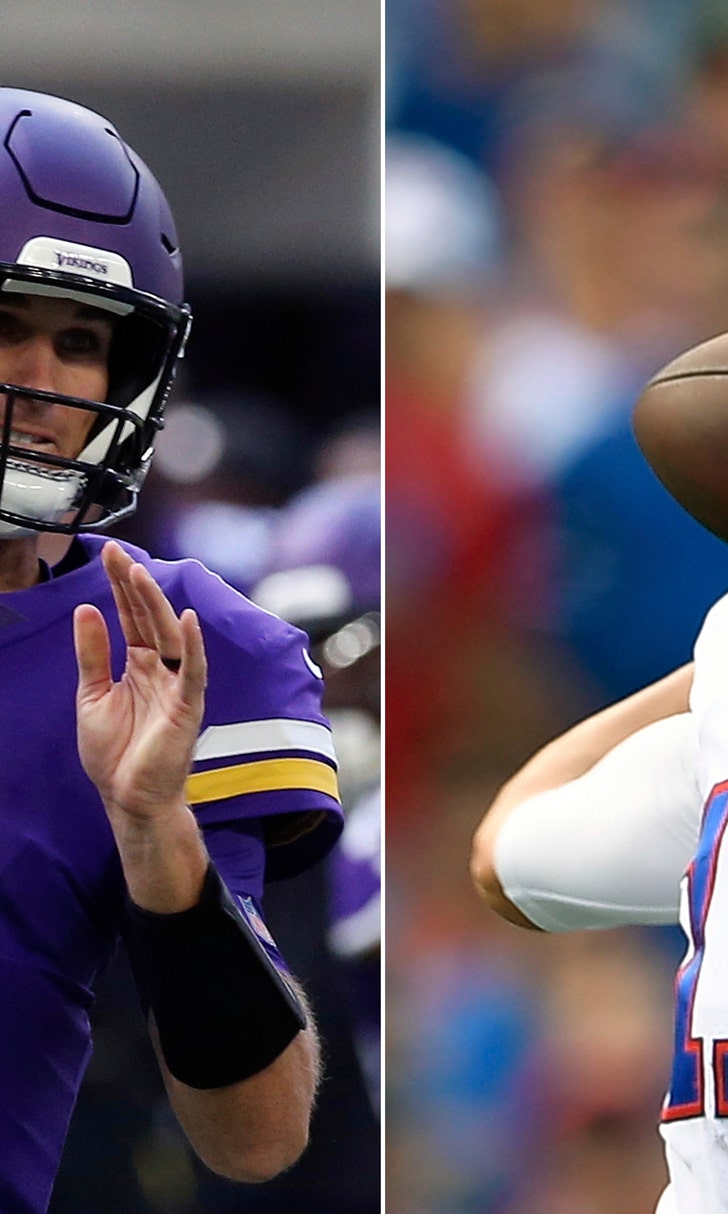 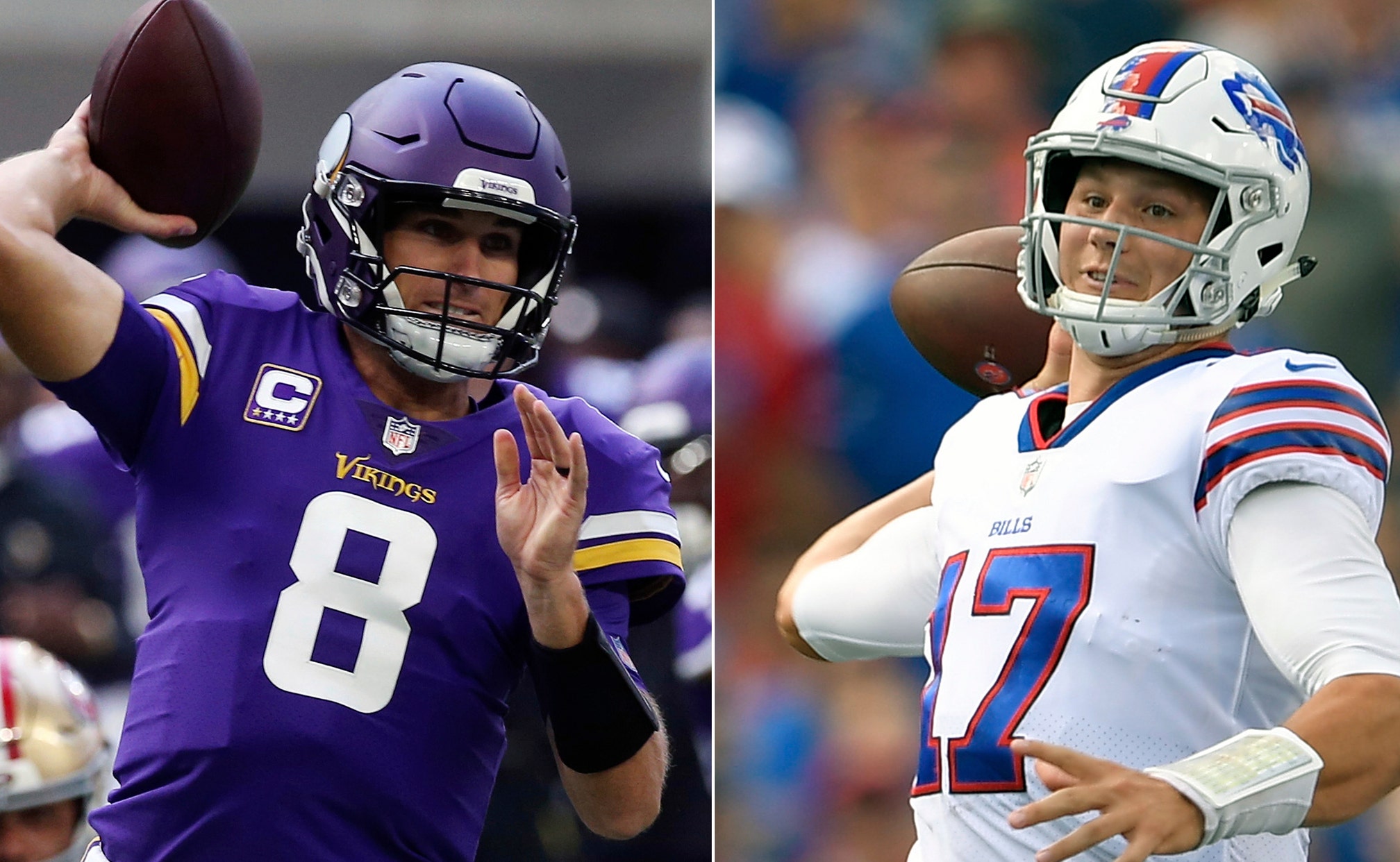 MINNEAPOLIS (AP) — Kirk Cousins delivered for the Minnesota Vikings the type of performance expected from, and demanded by, his big contract.

Passing for 219 yards and three touchdowns over the fourth quarter and overtime at Green Bay, Cousins guided the Vikings back from a 13-point deficit to forge a tie with the Packers despite an interception and many other mistakes by the rest of the team.

Given this was his first NFC North game and first on the road against Minnesota's primary rival, there was a statement made that afternoon at Lambeau Field.

"I've seen Kirk do those things before, so it just solidified what type of leader he is," offensive coordinator John DeFilippo said. "You're never out of the game."

The Vikings (1-0-1) are fifth in the NFL in total yards, entering Sunday against winless Buffalo. Cousins, however, was quick to point out the Vikings had only seven points through three quarters at Green Bay.

"We'd love to be more explosive throughout the game as opposed to more concentrated to late in the game," Cousins said. "We want to be an offense that can strike at any time, but also be a threat from the first quarter all the way through the last."

The Bills have a long way to go to get there, having handed their quarterback job to rookie Josh Allen during their blowout loss at Baltimore in the opener. The seventh overall pick in the draft showed some progress last week, but with an unsettled offensive line and a lack of game-breaking receivers, this season figures to be a steep learning curve for Allen.

"All these trials and tribulations that I'm going to go through my rookie year," he said, "are only going to help in the long run."

Here are some other key angles to follow for the Bills-Vikings game:

The Bills were outscored 75-9 over their first six quarters until making modest improvement in the second half last week. What changed? Well, coach Sean McDermott took over the play-calling duty from defensive coordinator Leslie Frazier, his long-time friend and mentor. They will collaborate now.

"We're going to do what we feel we need to do in games, and improve," McDermott said, "and we look in every corner to improve."

"That's something that we can build on this week going in, just having the confidence of knowing we can stop teams from scoring," said Tre'Davious White, one of only three healthy cornerbacks on the roster following the retirement of Vontae Davis and injuries to Phillip Gaines and Taron Johnson.

Frazier took the adjustment in stride. He first began coaching with McDermott in 1999 with the Philadelphia Eagles.

"We owe it to our players to give us the best chance to win, whatever it may be," Frazier said, "and so that's how I looked at it."

Frazier, of course, was the head coach for the Vikings for three-plus seasons after serving as defensive coordinator prior to that. This will be his first return to Minnesota for a regular-season game since his firing after the 2013 season.

"Just a lot of good relationships back in Minnesota, a lot of fond memories," Frazier said.

If and when Dan Bailey makes his first field goal on Sunday, the crowd at U.S. Bank Stadium will undoubtedly roar with an undertone of sarcasm after those three wide rights by now-discarded rookie Daniel Carlson against the Packers.

Kicking trouble has hounded the Vikings throughout Mike Zimmer's reign as head coach since 2014, so they were relieved that a player with Bailey's accomplishment and experience was available this week .

The Bills have had more stability lately with Stephen Hauschka, who ranks fourth on the NFL's all-time field goal accuracy list . Bailey is second. Hauschka, who was in training camp with the Vikings as a rookie in 2008, is 33 for 38 on field goal tries in 19 games with the Bills and has converted all 31 extra point attempts.

"We are fortunate. Hauschka is very steady and a veteran who has kicked in big games," McDermott said. "That was part of the reason why we picked him up."

The Bills ranked sixth in the league last year in rushing yards, on the strength of a second straight 1,000-yard season by LeSean McCoy, but Bills running backs have only 108 yards on 31 attempts through two games. This has been a rough season so far for McCoy. He's been working through a rib cartilage injury this week, when he was also named in a second case of alleged abuse brought forth by a former girlfriend .

Minnesota's defense is not an ideal opponent against which to get on track.

"They're a good team. It's a challenge. If I'm good enough, I'll go out there and compete," McCoy said.

Vikings special teams coordinator Mike Priefer has been under pressure for more than just the place-kicking problems. The Packers blocked Matt Wile's punt and turned it into a touchdown last week, the most glaring mistake that wasn't a missed field goal.

"We're going to have to clean it up," Zimmer said.

Herd Hierarchy: Week 12
It's a bloodbath in the latest "Herd Hierarchy," where Cowherd has tossed out four top 10 teams from last week.
5 days ago