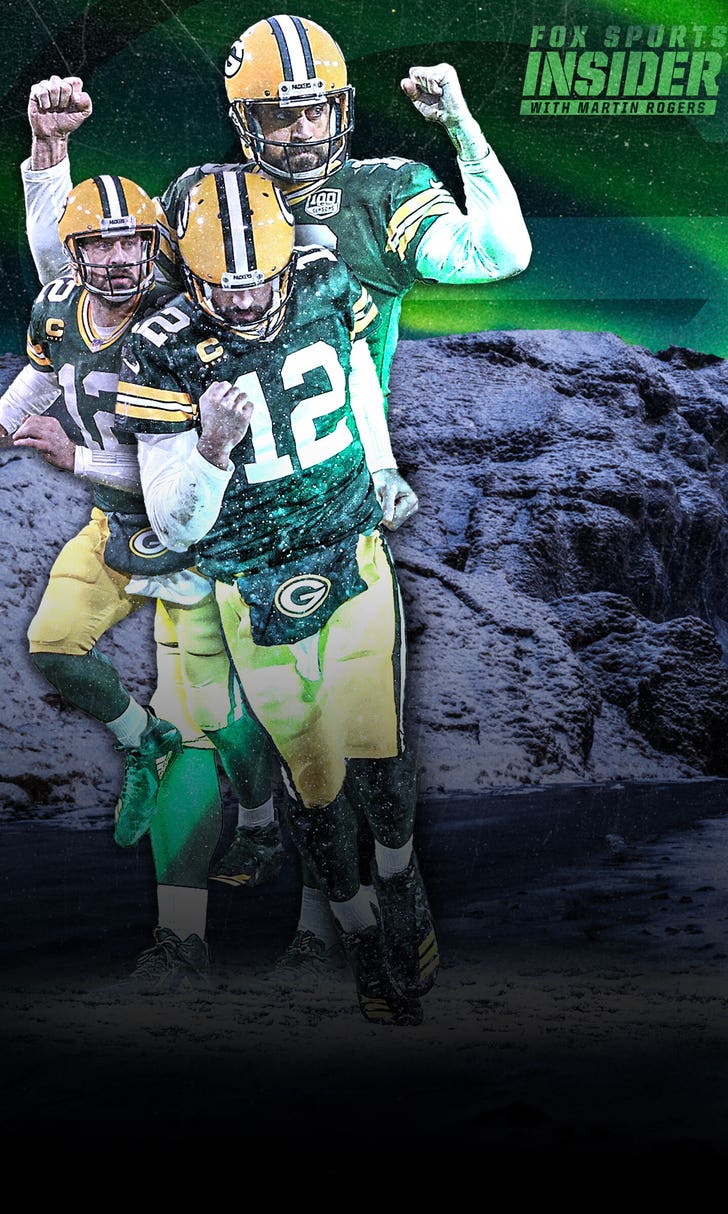 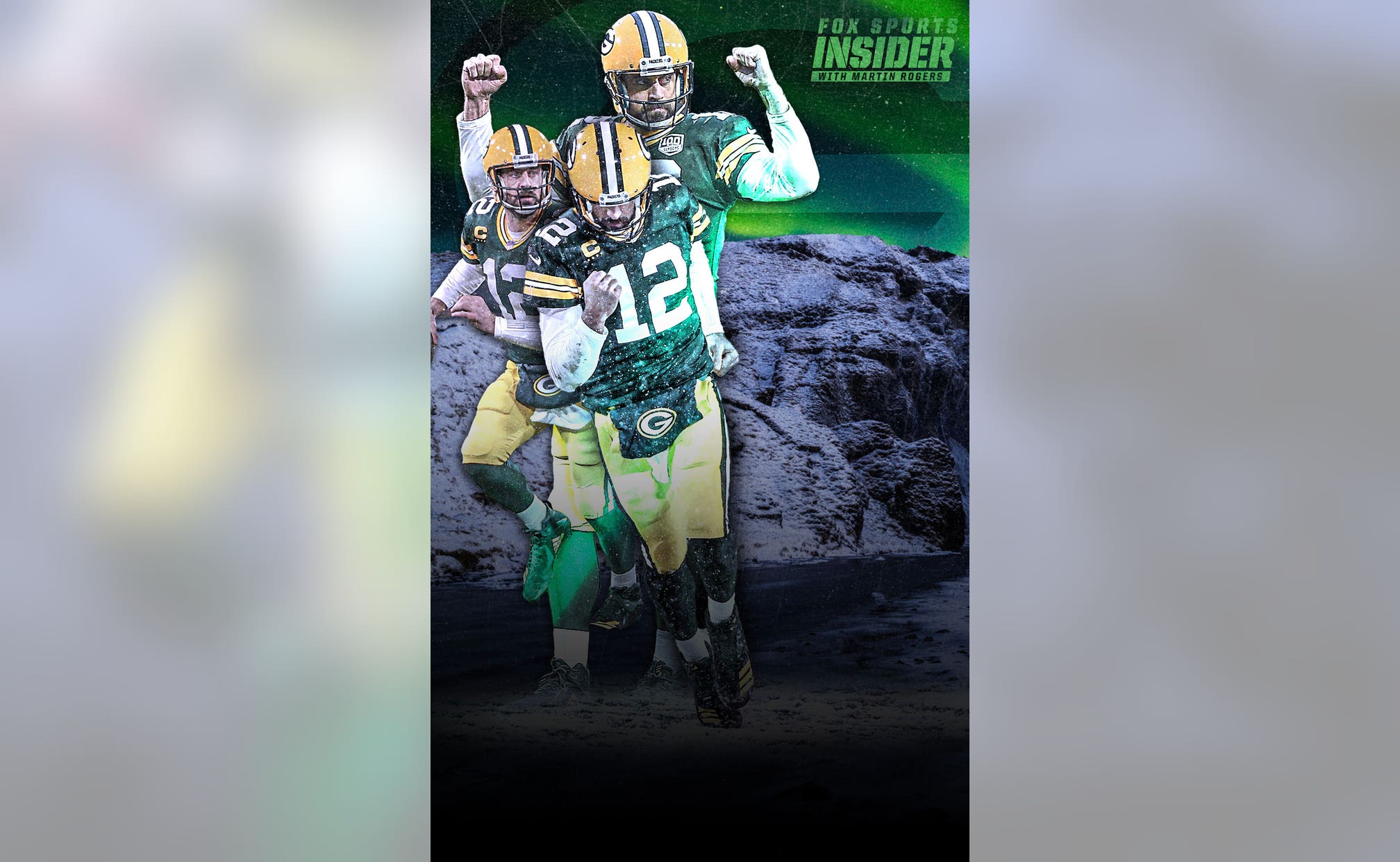 Eyes On A Bigger Prize

Aaron Rodgers had a few comments to make about his performance on Sunday.

On the night the Green Bay Packers calmly dismantled the Tennessee Titans to retain control of the No. 1 seed in the NFC, Rodgers said things had been "solid."

A spectacular four-touchdown effort that may – and should – have etched his name onto the MVP trophy and simultaneously ended the hopes of the Tennessee Titans’ Derrick Henry, was, according to the veteran quarterback, "pretty good."

And, following the second to last game of a campaign that began with his successor being drafted yet will end with Jordan Love more likely to catch hypothermia from standing on the frosty Lambeau sideline than land the Packers starting job anytime soon, Rodgers claimed to be "quite happy."

If he ever becomes really thrilled with how things are going ... watch out.

For the Rodgers hype train is building steam, even if No. 12 himself isn’t ready to jump aboard it. Sunday was a reminder that the prospect of facing an in-form Rodgers on snow-specked Wisconsin tundra isn’t any fun at all and, if Green Bay sees off the Chicago Bears on Sunday, the only remaining road game they’d have until next season would be a trip to the Super Bowl.

Rodgers has one title to his name, but a decade has passed between then and now and this would be his and Green Bay’s best opportunity since then.

"If they beat the Bears, they have to be the favorites in the NFC," FOX Sports’ Nick Wright said on First Things First. "I want the audience to understand how rare this has been for Aaron Rodgers. Aaron Rodgers, in his career, has been the No. 1 seed one time. In his career, he has played a total of six playoff games at Lambeau."

Meanwhile, Rodgers continues to build upon what has been an outstanding season. With one outing left, he is now over 4,000 yards and has thrown 44 touchdowns to five interceptions, numbers that would be hard to believe if his play didn’t transmit so effortlessly.

As a result, it is getting harder and harder to make a case for, of all people, Patrick Mahomes in the MVP hunt, simply because for all the Kansas City Chiefs star’s brilliance, Rodgers is the one guy who has outplayed him.

"Rodgers is this year's MVP for one simple reason: He's done more with less," wrote NFL.com’s Jeffri Chadiha. "Mahomes has produced another monster season with the assistance of the best tight end in football, the best deep threat in football and an assortment of other speedy playmakers at his disposal. Rodgers, on the other hand, has elevated the play of those around him."

This kind of season from Rodgers has kind of snuck up on us. There was apparently an overwhelming, undisputed, cast-iron MVP winner when this season was at the midway point. It was Russell Wilson, and he is totally off the radar now, even with the Seattle Seahawks still a real contender.

Then there was Buffalo Bills quarterback Josh Allen who surged forward, and Henry, who has steadily gained traction with those who are sick of the winner being a QB so often. Then Mahomes was the most popular pick with the Chiefs looking unstoppable, with Rodgers always hanging around but never the trendy pick. Until now.

"Rodgers isn't just the obvious leader in the clubhouse to claim the hardware," wrote Bleacher Report’s Brent Sobleski. "No one else should receive a vote."

It wasn’t supposed to go quite as well as this. When the Packers traded up to the 26th pick to get Love and resisted the opportunity to get receiving help it was heavily questioned, especially with Rodgers now 37 and with his presumed window of Super Bowl contention tightening.

Yet the parts in place have been better than serviceable and perhaps the Packers, under Matt LaFleur, have been able to take care of both the present and the future. Davante Adams has hauled in 17 touchdowns and he and Rodgers have now connected on more passes than any other combination in Packers history.

Robert Tonyan is thriving at tight end and a running game that revolved around Aaron Jones now has a legitimate second threat in A.J. Dillon.

Realistically though, Rodgers is the man who makes it all tick. FOX Bet now lists him at -150 to win the MVP and the Packers are listed at +550 odds to win it all.

"Green Bay looks balanced, physical and smart. They're one of a handful of teams that can win the Super Bowl."

The postseason can bring such unpredictability and hey, even with the New Year looming, this is still the 2020 season, so who knows what remains in store for us? Yet things do seem to be inexorably leaning towards a clear path for Green Bay in the NFC, just like it appears to be so for the Chiefs in the AFC.

Rodgers has had his heart broken by no shortage of near misses in the past and Packers fans still wince at mention of the Seahawks’ infamous onside kick in the 2014 NFC Championship. He has seen his efforts crushed by bad defenses and untimely injuries and now, with the end of his career at least in sight, he must wonder how he has never gotten back to the biggest game of all. Adams, and other Packers teammates, are determined to put an end to that.

"Being with that guy has allowed me to know what true greatness is," Adams told reporters.

As a wild season winds down, maybe all that prior disappointment is the reason Rodgers isn’t buying the hype.

He’s surely enjoying a great campaign, but won’t be remotely satisfied unless it turns into more.

What Is Rams vs. Packers? An Elite Clash
He'll soon fill in for Alex Trebek (no, really). First, Aaron Rodgers and the Packers must face down the NFL's top defense.
12 hours ago

How To Win $250,000 On Rams-Packers
Will the Rams be able to slow down the Pack? If you make the right choices, you could win big in the Super 6 contest.
12 hours ago

A Problem in Houston
Deshaun Watson is not happy with the Texans, and his days might be numbered in Houston. How did we get to this point?
12 hours ago
those were the latest stories
Want to see more?
View All Stories
Fox Sports™ and © 2021 Fox Media LLC and Fox Sports Interactive Media, LLC. All rights reserved. Use of this website (including any and all parts and components) constitutes your acceptance of these Terms of Use and Updated Privacy Policy. Advertising Choices. Do Not Sell my Personal Info