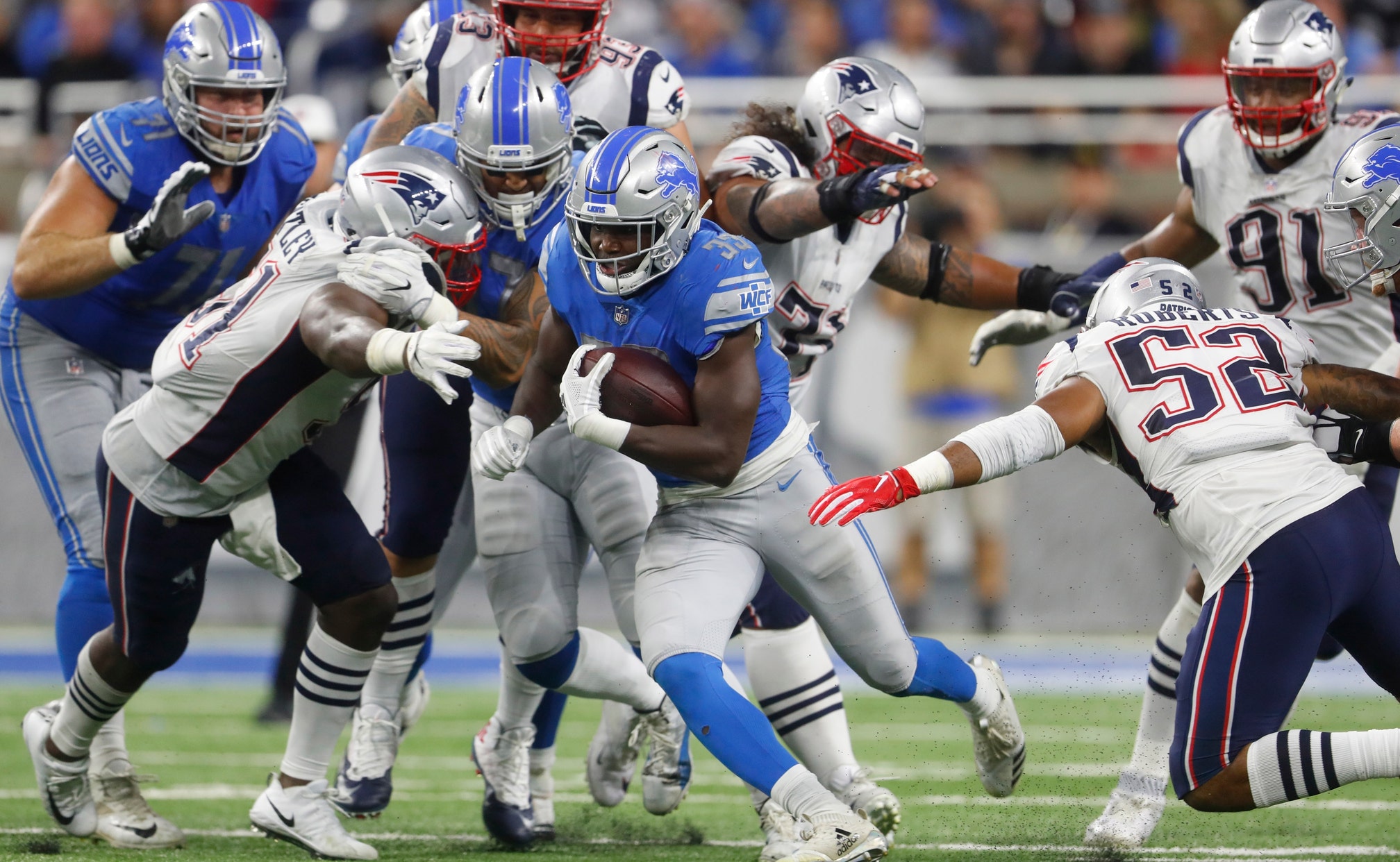 A rushing barrier finally falls for Lions against Patriots

Johnson ran for 101 yards Sunday night, and Detroit beat the New England Patriots 26-10 . It was the first time a player on the Lions ran for 100 yards in a game since Nov. 28, 2013, when Reggie Bush did it. The home crowd appeared well aware of the streak, cheering loudly when Johnson's stats were put on the scoreboard.

"I know there's kind of stigmatism of the run game around here and however long it's been since we've run the ball well," Detroit coach Matt Patricia said. "I don't really think that's fair to these guys that are this year's team. They're trying to do a great job running the ball this year."

Johnson, a rookie from Auburn, was effective throughout the game. Detroit established the run early and ended up with a huge edge in time of possession. The Lions controlled the ball for 39:15.

"We just didn't do anything well enough to give ourselves a chance to win," Patriots coach Bill Belichick said.

The Patriots (1-2) allowed 13 points before they could manage a single first down. They pulled within three points in the third quarter, but Matthew Stafford's 33-yard touchdown pass to Marvin Jones made it 20-10, and New England's offense bogged down again after that.

The Lions (1-2) outgained the Patriots 414-209, and that was only after New England picked up 52 yards on a meaningless drive at the end.

Here are a few more things we learned in Detroit's surprising victory:

Patricia's outlook in Detroit now looks a lot better after he beat his former boss. Patricia came to the Lions in the offseason after being part of Belichick's staff with the Patriots. His debut in Detroit couldn't have gone much worse — the Lions lost their opener at home to the New York Jets, 48-17, then fell to San Francisco on the road.

The performance against New England gave fans a lot more to cheer about.

"I really thought the fans were just unbelievable tonight," Patricia said. "The games are hard. There are a lot of things that go on in the game and it goes up and down and the ebbs and flows of it, but just having the constant fans kind of backing all the way through the game tonight, even when things don't necessarily go the way you want them to go and knowing that you still have the crowd behind you and they're still cheering and they're still making an impact on the opponent. It was a big advantage for us."

With Julian Edelman suspended, New England looked abysmal offensively for much of this game. Rob Gronkowski had four catches for 51 yards, but Brady threw for only 133 yards, his fewest since Dec. 28, 2014, against Buffalo.

"It wasn't like they reinvented the defense out there, it was really just us not doing a good job of anything," Brady said. "Run game, pass game, we didn't do enough to advance the ball forward."

Johnson was productive with the ball, but Detroit's offensive line deserves a lot of the credit for the Lions' long-awaited rushing milestone. The line blocked well in the running game and allowed only one sack.

New England certainly should have been motivated for this prime-time game after losing to Jacksonville the previous weekend, but the Patriots were manhandled early by Detroit. With 4:58 left in the second quarter, the Lions had huge edges in first downs (14-0), yards (196-13) and time of possession (20:46-4:16). New England was somewhat fortunate to be down only 13-0 at that point.

Asked what his team needed to do to play better team defense, Belichick was succinct: "Everything."

The Patriots suddenly face an intriguing September matchup next weekend when they host Miami. The unbeaten Dolphins have a chance to put New England in a three-game hole in the AFC East.