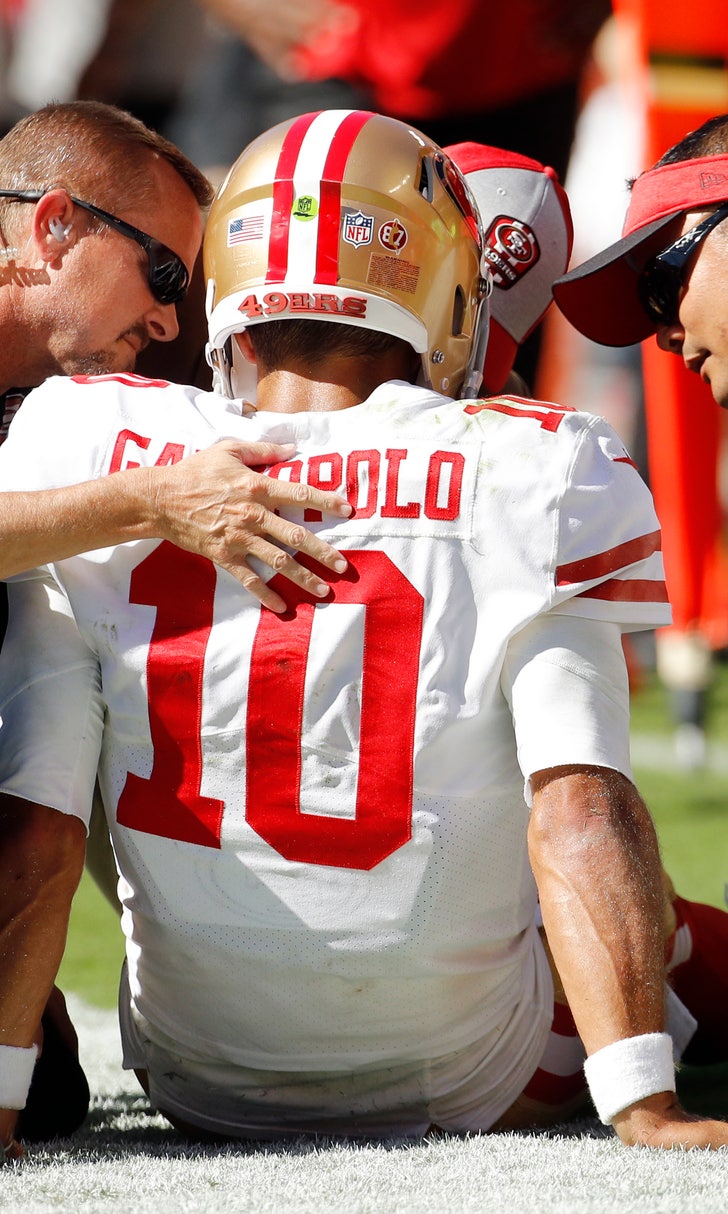 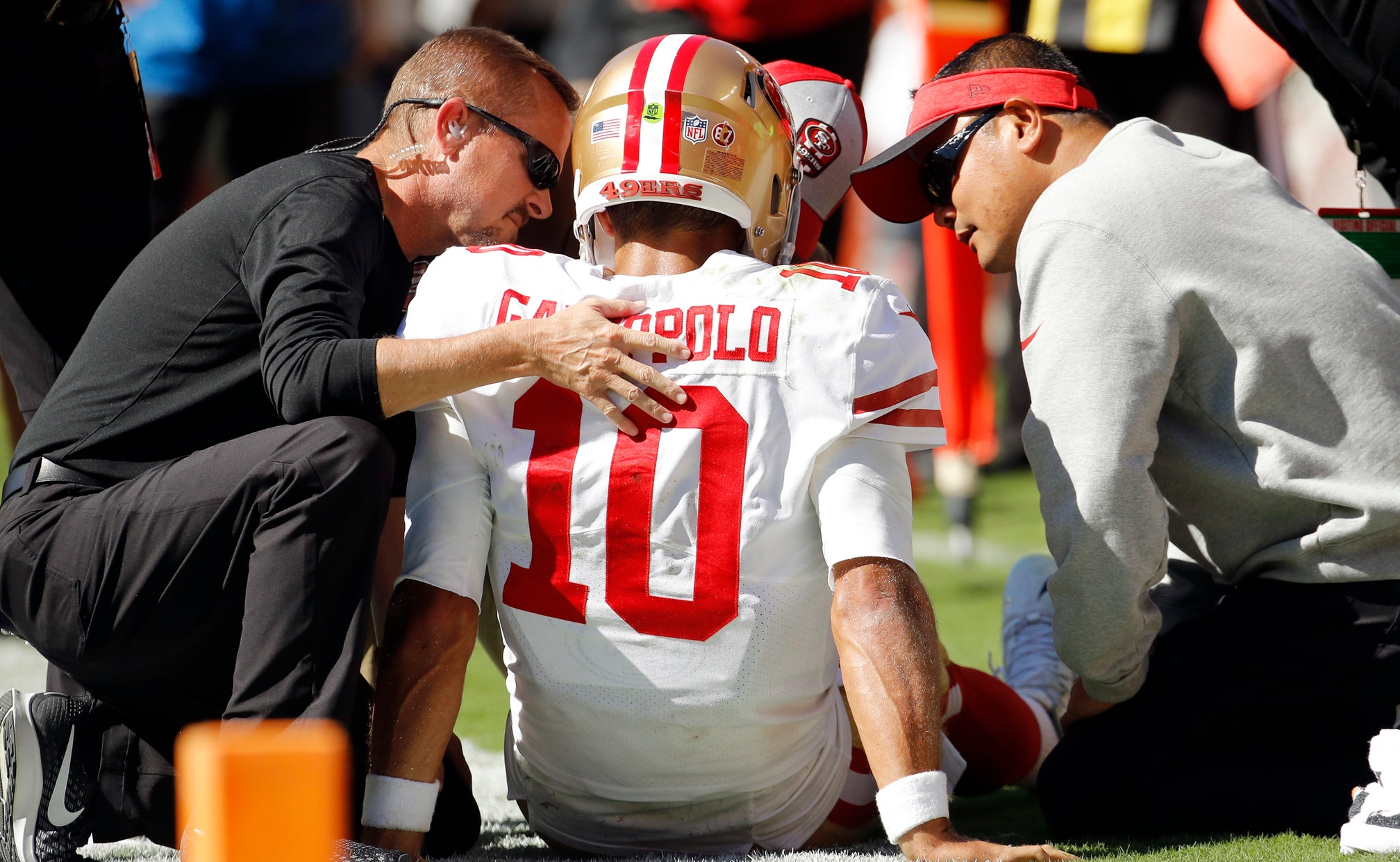 SANTA CLARA, Calif. (AP) — Jimmy Garoppolo's addition last season immediately turned around the fortunes of the San Francisco 49ers. Now the 49ers will have to go back to life before Garoppolo for the rest of the season.

The Niners announced Monday that Garoppolo tore the ACL in his left knee while making a cut late in a loss at Kansas City, sidelining him for the rest of the season.

"It is very unfortunate," coach Kyle Shanahan said. "I'm not going to sugarcoat it. It was hard waking up today. We were down and disappointed about it because we were looking forward a lot to playing with Jimmy this year and going through the good and the bad knowing that he'd benefit from all of it. Now we don't get to do it. I know Jimmy is really down about it and so are we but it's still going to be all right."

The injury deals a serious blow to the 49ers (1-2), who had planned their rebuild around Garoppolo and now must turn again to C.J. Beathard at quarterback.

Garoppolo will undergo surgery in the next week or two after the swelling goes down and should be ready to play again next season. The 49ers are planning to promote Nick Mullens from the practice squad and also will bring several veterans in for tryouts this week, including Tom Savage, Kellen Clemens, possibly T.J. Yates and Matt Moore.

One quarterback who won't be brought in is former 49ers starter Colin Kaepernick, who opted out of his contract with San Francisco in March 2017 after Shanahan decided he wanted to go with a style of offense that didn't fit Kaepernick's game.

The Niners struggled with Beathard and Brian Hoyer last season before the midseason addition of Garoppolo changed their fortunes. San Francisco won the final five games last year after Garoppolo took over as starter and the team rewarded him with a $137.5 million, five-year contract.

The 49ers will have to wait another year to earn dividends on that investment. Garoppolo got hurt in the fourth quarter of a 38-27 loss Sunday when he was scrambling toward the sideline and decided to cut up field instead of going out of bounds.

Garoppolo's left knee buckled just before Kansas City cornerback Steven Nelson delivered a big hit, ending what was supposed to be his first full season as a starter after just three games.

Shanahan said the play should serve as a reminder to quarterbacks about the importance of protecting their bodies.

"That's something that Jimmy will probably look at differently going forward because now he'll remember this the rest of his life," Shanahan said. "Nothing against him. This happens with everyone. You see it every Sunday. It's a reminder for everyone why it's an obvious coaching point."

Expectations were high in San Francisco this season that the team could end a four-year playoff drought after Garoppolo had a full offseason to immerse himself in Shanahan's offense. But with Garoppolo and new running back Jerick McKinnon both knocked out for the season with torn ACLs in September, those high hopes have been put on hold.

Garoppolo had completed 59.6 percent of his passes with five TDs, three interceptions and an average of 8.1 yards per attempt for a 90 passer rating. While he hasn't been quite as efficient as he was late last year after being acquired at the trade deadline from New England for a second-round pick, the Niners offense has been far more potent than it was before he took over as quarterback.

Beathard started five games as a rookie last year, completing 54.9 percent of his passes with four touchdowns, six interceptions, 19 sacks, 6.4 yards per attempt and a 69.2 passer rating that was second lowest in the NFL.

Beathard threw a touchdown pass to George Kittle on his first snap Sunday only to have it negated by a penalty and wasn't in for any other plays in the game.

"I have a lot of confidence in C.J.," Shanahan said. "I think C.J. got a lot of experience last year. We liked him a lot coming out of college. ... He got thrown into as tough a situation as I could imagine a rookie quarterback being thrown in and the guy didn't blink."

NOTES: CB Richard Sherman will miss a couple of weeks with a strained left calf. ... RB Matt Breida hyperextended his knee and is questionable this week. ... RG Mike Person will be questionable with a sprained knee.