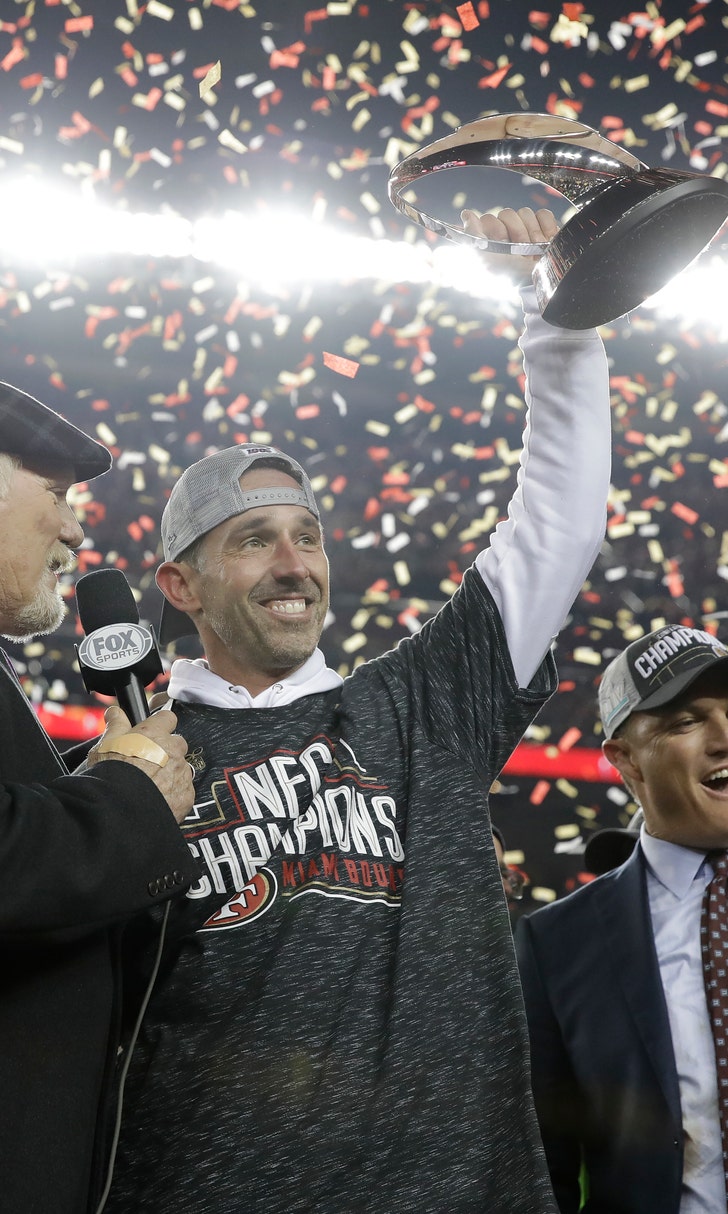 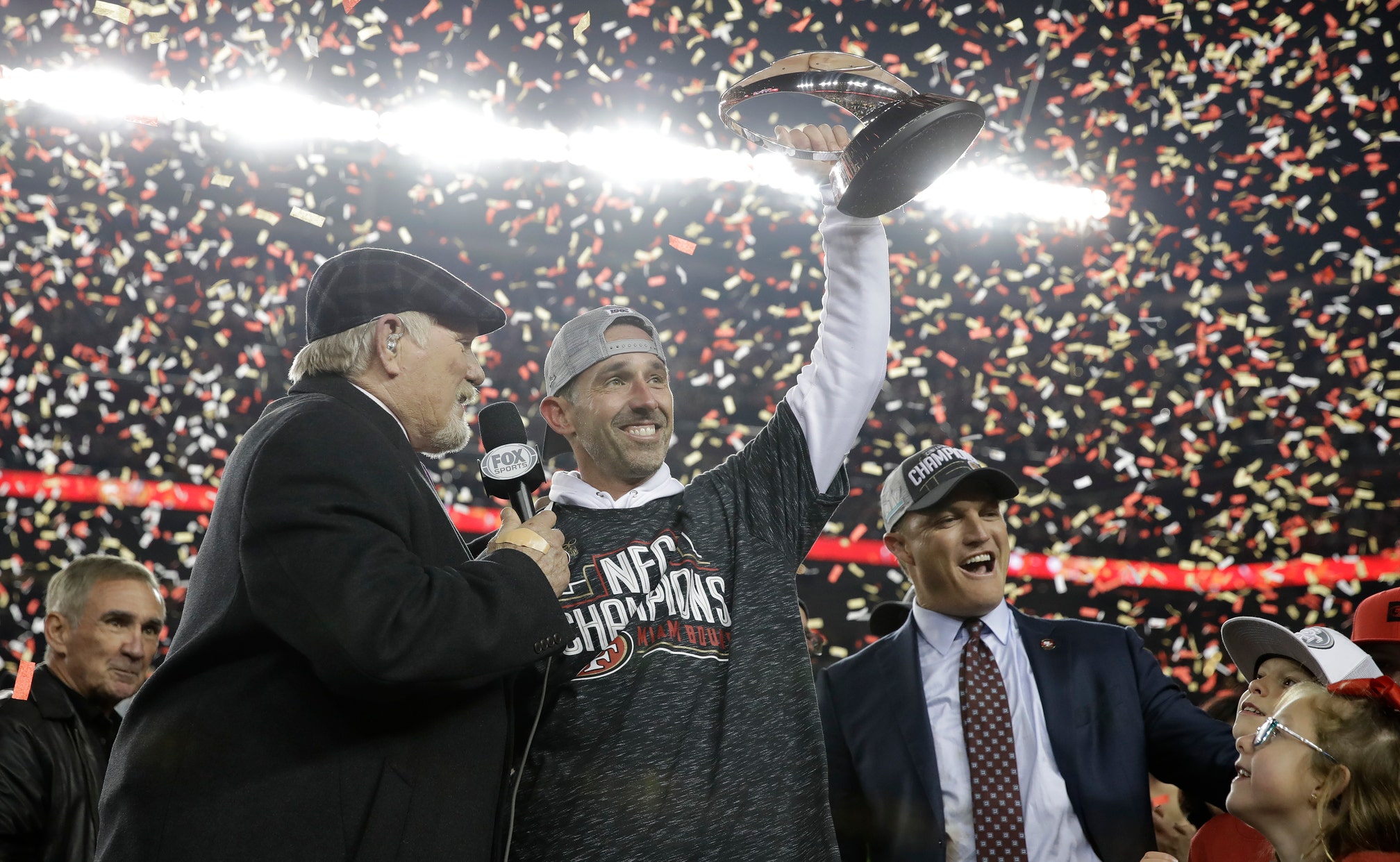 SANTA CLARA, Calif. (AP) — As the celebration raged in the victorious 49ers locker room, general manager John Lynch showed off a "Mobile to Miami" T-shirt that symbolized the turnaround in San Francisco.

The team that was so bad a year ago that the coaching staff got rewarded with a week coaching the Senior Bowl in Alabama is now playing for the championship in the Super Bowl on Feb. 2 in Miami against the Kansas City Chiefs.

"It is amazing," defensive lineman Arik Armstead said. "It means a lot to us, especially going through all of the adversity that we went through over the past couple of years. To be going to the Super Bowl and have the chance to be the top of the league is amazing."

The 49ers (15-3) got there thanks to a big-play running game led by Raheem Mostert that rushed for 285 yards and a defense that tormented Aaron Rodgers in a 37-20 win over the Green Bay Packers on Sunday.

That sent the Niners to the Super Bowl for the first time since the 2012 season.

Coach Kyle Shanahan went there once before as an offensive coordinator for Atlanta in the 2016 season when the Falcons memorably blew a 28-3 lead and lost 34-28 in overtime to New England.

Shanahan took lessons from that game, including never feeling comfortable with a lead. But the biggest thing he learned was how to approach Super Bowl week.

He plans to have a normal week of practice before the team leaves for Miami, with coaches putting in the game plan on Tuesday and then players returning Wednesday for three straight days of practice.

The players will then get Saturday off before leaving for the game on Sunday and getting another week of preparation in Miami.

"We try to do everything before," Shanahan said. "We definitely know we have the whole week when we get there. But there's different media obligations that get you out of your routine and everything. You don't want to play catch-up at the end of the Super Bowl week. You want to do that now."

Running game. One week after Tevin Coleman ran for 105 yards and two TDs, Mostert did even better. Mostert had 29 carries for 220 yards and four touchdowns, posting the second-best rushing total in playoff history to Eric Dickerson's 248 yards for the Rams on Jan. 4, 1986. Mostert had the 11th game since 1950 with at least 200 yards rushing and at least four TDs.

Not much. Just about everything is going right for the Niners, who have won back-to-back playoff games in the season by at least 17 points for the fourth time in franchise history. The first three times that happened ended in championships following the 1984, '88 and '89 seasons. The defense did allow a couple of big pass plays in the second half but the game was well in hand by then and that caused little damage.

CB Emmanuel Moseley. Thrown back into the starting lineup after Ahkello Witherspoon got benched against Minnesota, Moseley came up with one of the biggest defensive plays of the game. He intercepted Aaron Rodgers late in the first half to set up Mostert's third TD run that made it 27-0. Moseley will be counted on again in the Super Bowl against the high-powered Chiefs passing game.

Garoppolo's stats. Jimmy Garoppolo threw the ball only eight times against the Packers, the third fewest for a team in a playoff game since at least 1940. Only the Dolphins threw it less in the playoffs with six and seven attempts on the way to the Super Bowl title following the 1973 season. Garoppolo completed six of the throws for 77 yards but was asked to do little with the defense and running game playing so well.

Coleman left the game with a dislocated shoulder. He was undergoing an MRI on Monday to determine the severity but Shanahan said he expects Coleman will have a chance to play. ... S Jaquiski Tartt irritated a rib injury that sidelined him for the final four games of the regular season but should be OK for the Super Bowl.

25.2. The Niners have passed on just 25.2% of plays this postseason, including sacks. San Francisco has run the 89 times in two playoff games, becoming the first team in 16 years to post back-to-back 40-carry games in a single postseason. Carolina did it following the 2003 season on the way to a Super Bowl loss.

The Niners seek their record-tying sixth Super Bowl title in two weeks in Miami. Only the Patriots and Steelers have won six Super Bowls.