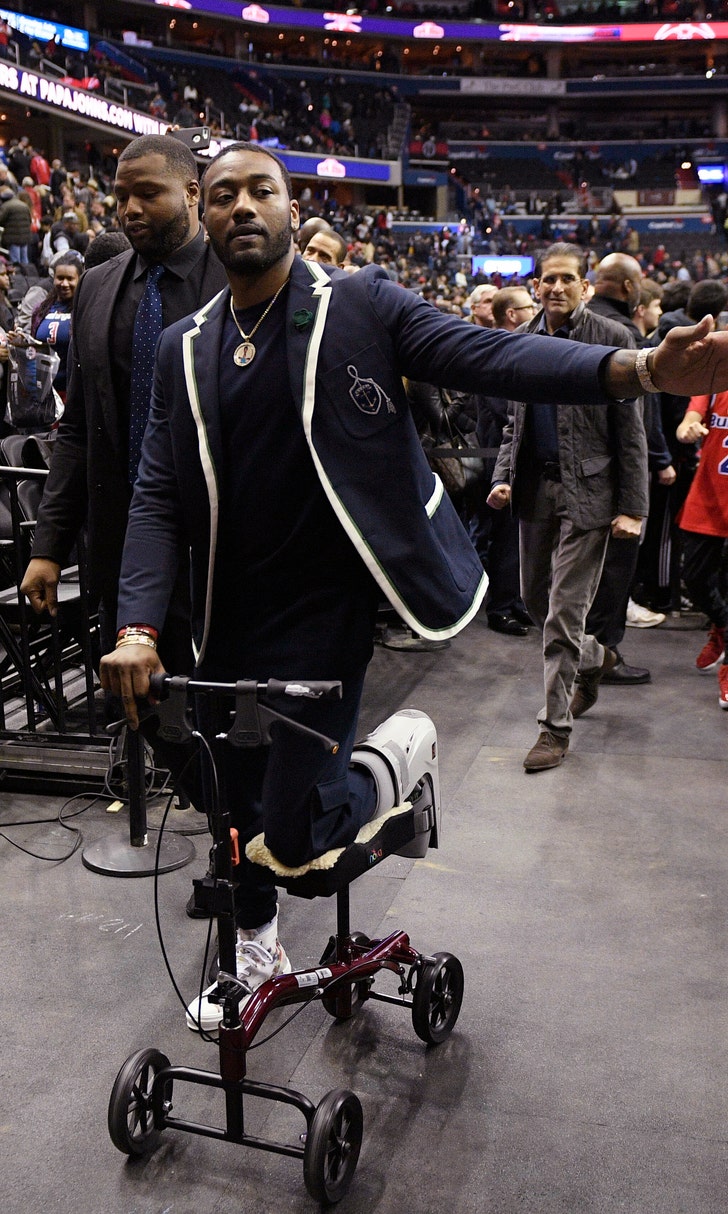 Wizards' Wall on injury: 'God is telling me something'

WASHINGTON (AP) — John Wall has a history of trying to play through pain. His latest setback is forcing the Washington Wizards guard to take a different approach.

"I guess God is telling me something," Wall said Friday night about the ruptured Achilles tendon that will force him to miss at least the majority of the 2019-20 season. "To sit down and get yourself fully healthy. I've played through injuries my whole career. I know a lot of people who played through injuries and don't sit down. That's one thing I don't like to do. If something that's nagging or not broken, I want to play. I guess it kind of caught up to me."

Wall was already out for the season after having surgery to repair bone spurs in his left heel. The rupture in his tendon was discovered by a team doctor during a follow-up procedure to clean out an infection. His recovery time has been estimated at 11 to 15 months.

"I didn't want to hear it," Wall said of the diagnosis. "I'm kind of glad it happened now instead of when I'm four or five months ahead in recovery, trying to get back on the court, and it happens then."

It's not clear what the injury will mean for a point guard who relies so heavily on his speed and athleticism. But Wall, whose $170 million "supermax" contract extension kicks starting next season, is optimistic about his future.

"All the people that talk negative like 'You're not coming back,' that just motivates me even more," Wall said.

Wall suffered the Achilles injury after slipping and falling at home.

"I understand I had an infection and getting off antibiotics, I felt like something wasn't going right," Wall said. "I slipped, but I don't think that's the main reason. ... My pain was still the same. I didn't have discomfort."

Wall averaged 20.7 points and 8.2 assists in 32 games this season. He played in only 41 games last season, during which he had an operation on his left knee. Wall also had surgery on both knees in 2016.

The injury prompted the Wizards to shake up the roster and shed salary by trading away Otto Porter Jr. and Markieff Morris. In Wall's absence, Bradley Beal has thrived as Washington's top scoring option.

"I felt like he should have been an All Star starter, with the numbers he's put up and carrying this team throughout the year," Wall said of Beal. "You don't see too many other guards doing that other than probably James Harden."