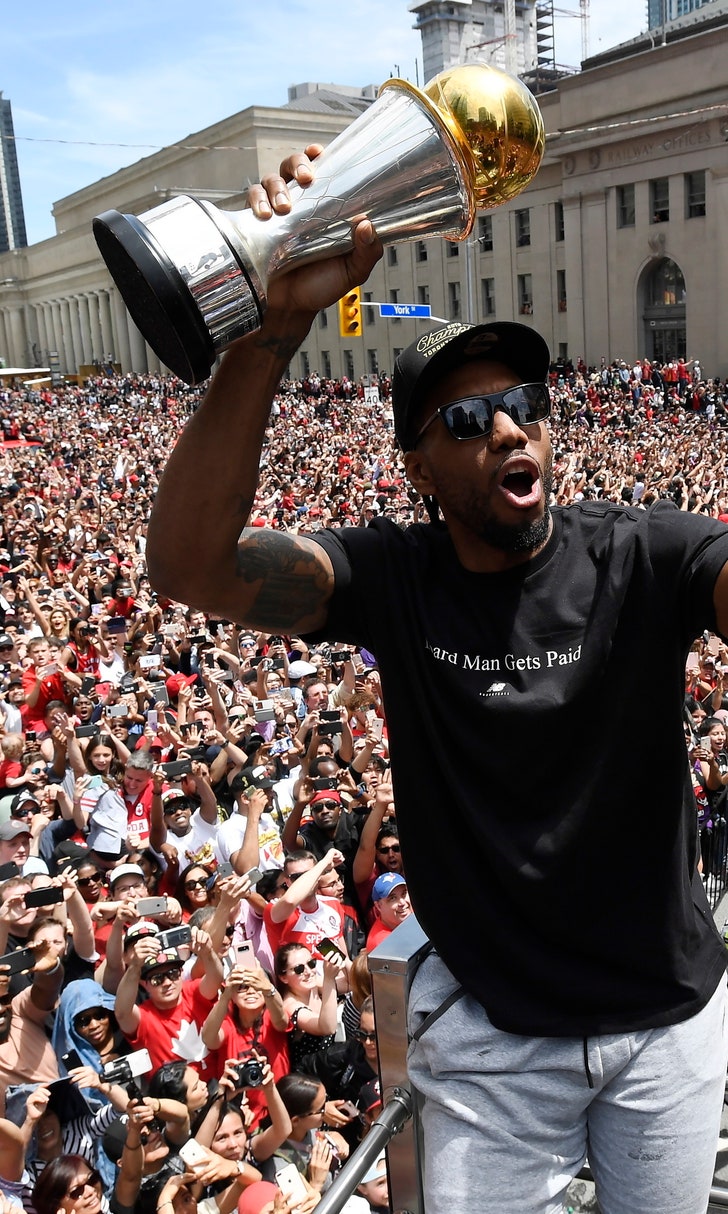 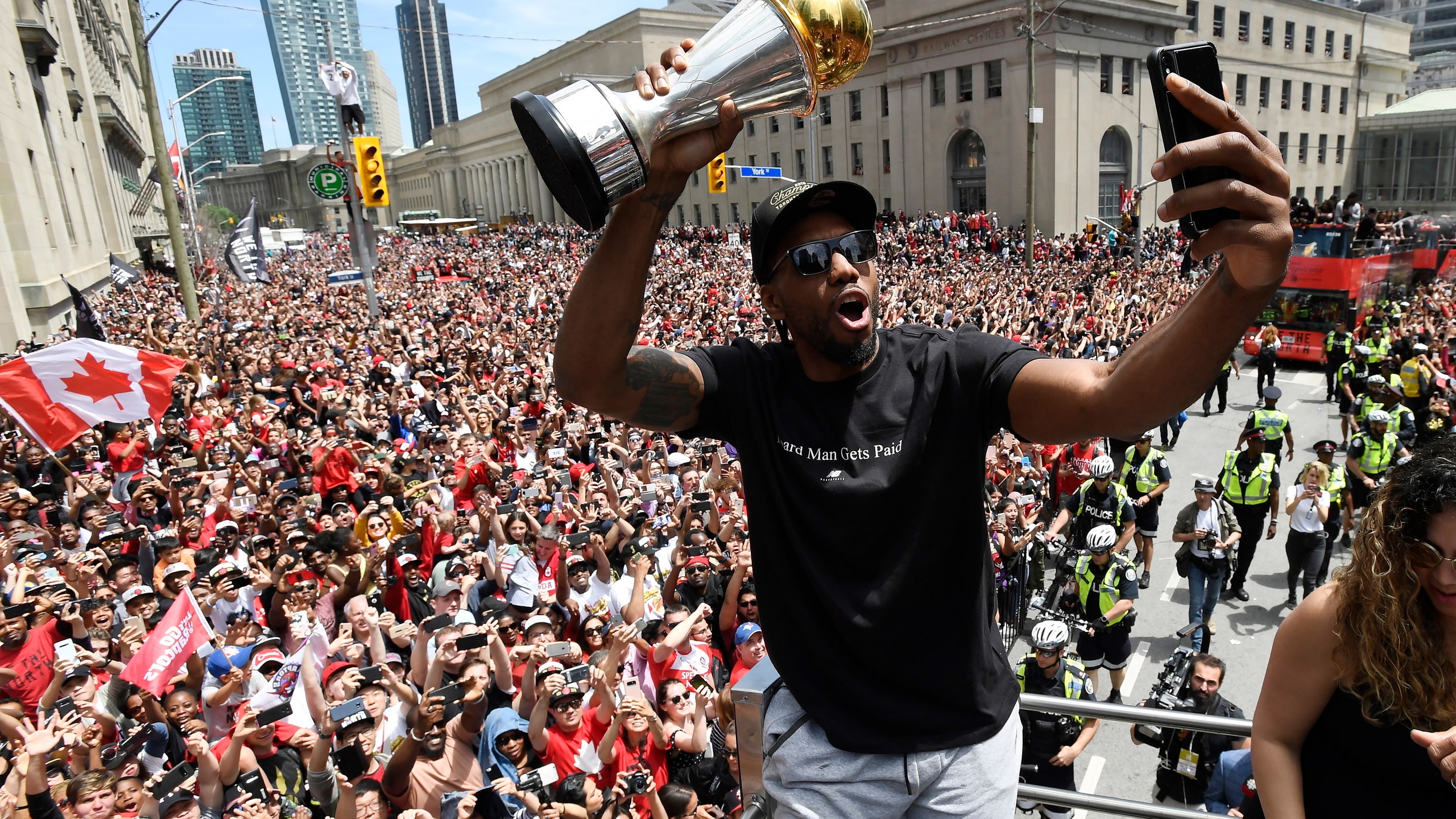 Without George to start, Clippers still among NBA's best

LOS ANGELES (AP) — The Los Angeles Clippers shocked the NBA by landing two superstars to go with a proven supporting cast. Only one of them will be on the floor to start the season.

The Clippers' chemistry — cemented through offseason workouts, group chat via text, a fishing trip and attending Rams games — should provide George plenty of time to work his way back.

He will miss the season's first 10 games, according to coach Doc Rivers, although the team has yet to confirm a timetable for his return. If Rivers is correct, George would be back at Houston on Nov. 13. He would miss key games against the Lakers, Golden State and Milwaukee.

"Hopefully, God willing, I can get through a season healthy," said George, who still finished third in MVP voting last season with Oklahoma City.

Playing with a scrappy intensity, the Clippers won 48 games last season and made the playoffs, even winning on Golden State's home court before bowing out in the first round.

"It's important for us to maintain that mindset," said Lou Williams, who earned his third Sixth Man of the Year award. "I don't think we should just stop being ourselves because we have the addition of those guys."

After being impressed by what the Clippers accomplished, Leonard came on board in July and brought Paul along, a couple of Los Angeles-area natives eager to get back to their roots. It didn't take either long to blend in.

"We fast-forwarded all that getting to know each other based on us already being in that chat," George said of his new teammates. "Hopefully, by June we're the last team standing."

Leonard is even more blunt about what he's back home to do.

"It's getting the Clippers to the finals," he said.

The franchise long dogged as the laughingstock of the NBA has never reached the conference finals.

Leonard owns two championship rings (San Antonio and Toronto) and Rivers has one (Boston). George is hungry for his first heading into his 10th season after years of futility in Indiana and Oklahoma City.

"It's about enjoying the journey and not getting ahead of yourself and not skipping any steps," Leonard said. "Going out there as one unit all trying to accomplish that ultimate goal."

The Clippers host LeBron James and the Los Angeles Lakers to open the season on Oct. 22.

Adding Leonard and George to Patrick Beverley's tenacious defense elevates the Clippers to an elite level. Leonard and George can guard multiple positions, defend man-to-man or help away from the ball. "It's just going to become contagious on a nightly basis," George said. "For the first time, people are going to be excited to watch the defensive side."

Williams led the team in scoring last season, averaging 20 points off the bench. Toss in George (28 ppg) and Leonard (26.6 ppg) and suddenly the Clippers have a trio of high scorers with the ability to be clutch in the fourth quarter. Montrezl Harrell averaged 16.6 points in joining Williams to form the NBA's highest-scoring bench duo last season.

MEN IN THE MIDDLE

Ivica Zubac walked down the Staples Center hallway from the Lakers' locker room to the Clippers' in February. The 7-foot-1 Serb became his new team's starting center and averaged 6.1 rebounds. They want more of that from him this season. Harrell was right behind Zubac in rebounding at 6.5. The physical big man worked on his offensive game over the summer, eager to improve his shooting from all over the floor. As if the feisty Harrell needs any extra inspiration, he'll be an unrestricted free agent next year.

It's a term not heard much around the Clippers, but it will be now in regards to Leonard. Injuries have marred each of his last three seasons — two in San Antonio and last year in Toronto — and his rehab process was a contentious issue with the Spurs, who eventually traded him north of the border. "I'm feeling good," Leonard said. "Feeling way better than I was at the start of last season." He played sparingly in the preseason.

Besides playing on opening night, the Clippers and Lakers meet again on Christmas night. The Clippers have dominated the match-ups over the last several years while having the playoff spotlight to themselves with the Lakers sitting at home. "It's not a head-to-head battle," George said, downplaying two teams in Los Angeles with shots at winning a championship. Still, their four meetings will be major events. The early schedule is favorable to the Clippers, who play 12 of their first 20 games at Staples Center. They're at home for five of their final eight to end the regular season.