Love broke a bone in his hand and the NBA's leading rookie rebounder last season hopes to return in late November or early December.

"Fortunately, it's my non-shooting hand," Love said after Minnesota's 94-90 preseason loss to the Chicago Bulls on Friday night.

That's about the only thing that went right for the Timberwolves.

Tyrus Thomas, who missed four games with a bruised right hip, had 22 points and 13 rebounds for the Bulls, and Jannero Pargo hit the go-ahead jumper in the final minute.

Chicago led most of the way until Minnesota's Damien Wilkins hit two free throws to tie it at 87 with 47.9 seconds left. Pargo then buried a jumper from the top of the key that sent the Bulls (5-1) to their third straight win and second in three nights over the Timberwolves (1-3).

With the Bulls leading 90-89, Pargo made 1 of 2 from the line with 17.4 seconds remaining. Al Jefferson had a chance to tie it when he was fouled after an offensive rebound but missed the second free throw. Taj Gibson's two free throws made it 93-90 with 10.2 seconds left.

Minnesota's Corey Brewer then missed a 3-pointer and Chicago's Derrick Byars hit another free throw with less than 2 seconds left.

Brewer finished with 20 points in a losing effort, but Love's injury overshadowed everything.

Love banged the hand against teammate Oleksiy Pecherov's elbow trying to go for a rebound on a missed free throw late in the third quarter and fractured the fourth metacarpal.

"I was on the right block, there was a missed free throw, I went to grab it and I hit Pech's elbow with my left hand pretty hard and it ended up being broken," said Love, who averaged 9.1 rebounds last season. "I was in such a good rhythm. I felt if I could get some solid minutes, I could put up some good numbers and really produce for the team. The other thing is just being out here with my teammates, building chemistry with guys I haven't played with for a bunch of years, that's really disappointing."

Thomas provided a big boost for the Bulls and did not show any obvious signs of lingering pain as he flew around the court. That was a good sign for a shorthanded team.

Already without Rookie of the Year Derrick Rose, who has not played since the preseason opener because of an inflamed tendon behind his right ankle, the Bulls were also missing guard John Salmons. He was with his wife for the birth of their second child.

Jefferson had 10 points and 16 rebounds for the Timberwolves, while Pecherov scored 16 points.

Thomas received a nice ovation when he checked in with 4:44 left in the first quarter and wasted no time making an impact.

He immediately drew a roar from the crowd when he soared for a putback dunk on Pargo's miss and added another jam and a layup on consecutive possessions about a minute later. Thomas kept it going in the second quarter, scoring eight points as Chicago built a 44-37 lead, but the Bulls had trouble pulling away.

"It was good to just come out and play, have some fun and to get the win," Thomas said. "I was cramping a little bit."

The Bulls got 14 points from Gibson and 13 from Pargo while improving to 5-1 in the preseason. Brad Miller scored four points after missing two games with the flu.

"I'm glad our guys are competing, but we had so many different lineups out there," coach Vinny Del Negro said. "Our body count is a little low so I'm just trying to mix and match and to make it work."

NOTES: The NBA has made a big statement by slapping coaches Stan Van Gundy, Larry Brown and Lionel Hollins with big fines for criticizing the replacement officials, and Del Negro is taking note. "Yeah, you just ... yeah," he said, his voice trailing off when he was asked if he's paying attention. He said the referees are "doing the best they can." The league fined Van Gundy and the Orlando Magic $35,000 each on Friday after hitting Brown and the Charlotte Bobcats for $60,000 and Hollins for $25,000. ... Timberwolves G Wayne Ellington shot 1 for 10 after missing a game with a sore left ankle.

Brooklyn's Finest
Where would the surprising Brooklyn Nets be if they had Kevin Durant and Kyrie Irving to lean on?
26 mins ago 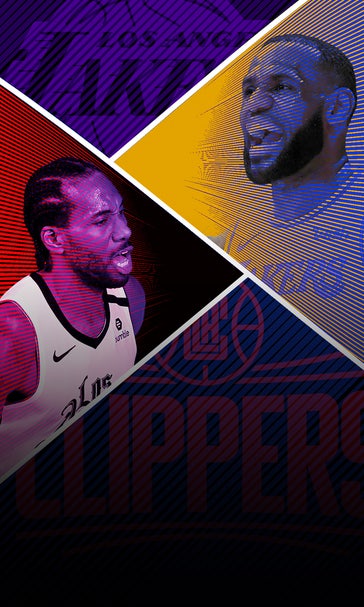 Trouble in the Bubble?

Trouble in the Bubble?
The playoffs are approaching, and neither the Lakers nor Clippers look their usual selves. Which team should be more wary?
3 hours ago

NBA 6-Pack: Lillard Lights It Up Again
It is starting to feel like Lillard Time 'round the clock. Here are the Top 6 things to know from the NBA bubble.
14 hours ago

Luka Balks At NBA Award Talk
Luka Doncic isn't sold on being on the shortlist for the Most Improved Player award, and instead offered up another name.
21 hours ago

Draymond Green Pays The Price
The NBA fined the Golden State Warriors forward for his Devin Booker comments, but he seems unfazed.
1 day ago
those were the latest stories
Want to see more?
View All Stories
Fox Sports™ and © 2020 Fox Media LLC and Fox Sports Interactive Media, LLC. All rights reserved. Use of this website (including any and all parts and components) constitutes your acceptance of these Terms of Use and Updated Privacy Policy. Advertising Choices. Do Not Sell my Personal Info