In what looked and felt like the final game of Tim Duncan's amazing NBA career, the San Antonio Spurs were desperate.

Not since the 2012 Western Conference finals had Gregg Popovich's crew looked so lost. Coincidentally, their foes that time around were these Oklahoma City Thunder, who deserve all the credit in the world for knocking off the Spurs. Oklahoma City will be heavy underdogs in the next round, but the Warriors would do well not to overlook Kevin Durant, Russell Westbrook and the rest of this squad.

Those 2012 Thunder were far from the same team that so thoroughly destroyed San Antonio on Thursday night. Oklahoma City literally and figuratively traded James Harden and a three-headed offensive attack for the stout presence of Steven Adams and Enes Kanter. And it paid massive dividends in this round.

The Spurs in 2015-16 were built to take on the Golden State Warriors. As the defending champions perfected their small-ball lineups, San Antonio looked in the other direction. LaMarcus Aldridge, David West, Boris Diaw and, of course, Duncan were supposed to punish Golden State with size on the inside. Big was the antidote to small.

Maybe it still can be. However, it's the Thunder who will put that to the test. They were better than the Spurs at their own game. Oklahoma City's bigs crushed San Antonio's -- and along the way, they turned Duncan into a downright depressing shell of his former self.

He had his moments, particularly in the last two games of the series. They were simply too few and far between to carry the Spurs any longer.

There was one last valiant effort at the end of Game 6. With the Spurs dead and buried, Duncan led his team back to just a 10-point deficit. Then, symbolism took over:

Before Game 6, coach Popovich reminded reporters that this is a make or miss league -- although he probably didn't mean it like things played out on that miserable possession. It's true, of course, and far be it for us to argue with one of the greatest coaches of all-time. But when you play Kevin Martin in the first half and trot out a Duncan-Boban Marjanovic frontcourt, as Pop did in this elimination game, such bromide is hard to swallow.

These were the latest in a long line of questionable decisions in the latter half of this series by Popovich. Kawhi Leonard spent an awful lot of time halfway defending Andre Roberson and halfway playing free safety rather than locking down Kevin Durant or Russell Westbrook.

Theoretically, it makes sense. Once the Thunder adjusted to Aldridge's interior scoring (as noted by Jeff Van Gundy on the ESPN broadcast, Oklahoma City approached Aldridge from a different angle and forced him to attack baseline), San Antonio's only offensive hope was Leonard. Asking the Defensive Player of the Year to carry the load on both ends might not have been feasible.

We'll never know, though, because the Spurs collapsed in Game 6 without trusting their best players. The same team that built a system  for so many years on its depth looked to the bench and saw only disappointment against the Thunder. And for whatever reason, Pop chose to roll with the sadness.

Now, the questions of retirement will reach a fever pitch -- and not just for Duncan. Manu Ginobili was equally decrepit in this series; the Spurs veteran totaled just 39 points, 12 rebounds and 14 assists in 116 total minutes. We understand he was likely limited by a ghastly injury he suffered late in the regular season. But as the injuries pile up, it might be time for Ginobili to call it quits as well.

Tony Parker probably isn't going anywhere any time soon, though, Spurs fans. Sorry about that one.

Duncan's decision may boil down to desire. He had a solid regular season, if nothing spectacular. He could easily come back next year and lead the Spurs defense while continuing to set screens and try to find the open player. But as the year wore on, Duncan looked shattered.

Other than Game 1 against the Thunder, when he was coming off nearly a week of rest, his movement has been extraordinarily limited. He's smart enough to pick closing out on a shooter or hanging back to protect the rim. The ability to do one then the other, rather than one or the other, is no longer there, however. Does Duncan want to keep having to make that choice?

Regardless of whether Duncan calls it quits or not, the Spurs will need to find their way forward. They're locked into Aldridge and Leonard, but the roster beyond that leaves a lot to be desired. There doesn't seem to be an heir to Parker as starting point guard in the wings, and there certainly isn't another Duncan lurking on the roster.

There will never be another Duncan, on this team or any other. If this is the end, we're going to need a moment.

Pop was asked pregame about the importance of rebounding vs OKC. He answered by talking about shot-making: pic.twitter.com/Hv9bkW468R 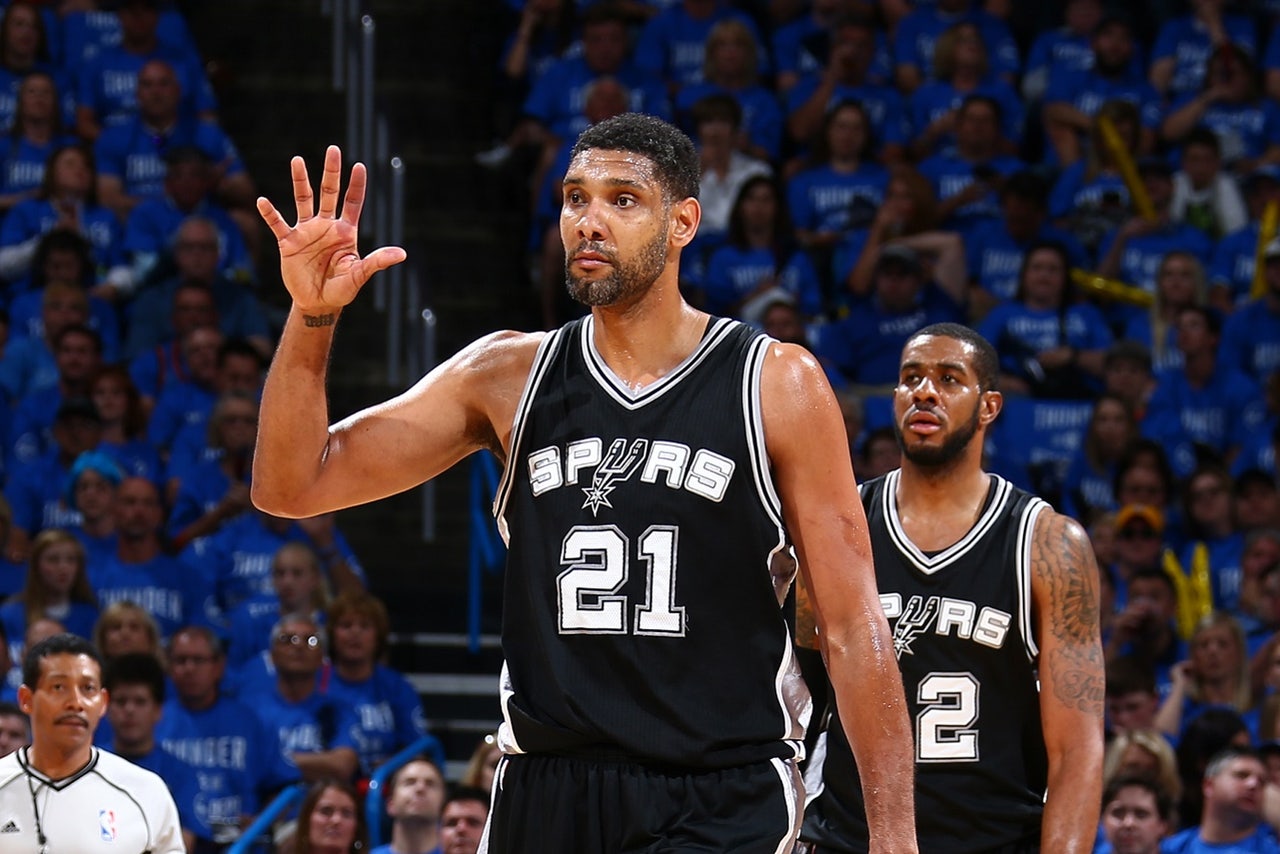 Tim Duncan was asked if we'd ever see him take the court again after tonight's game.

How to win $25,000 on NBA Wednesday
A possible NBA Finals preview looms, as the West's top team heads to Philadelphia to face the East's top dog.
7 mins ago

Why Pop and Kerr Spoke Out
Gregg Popovich and Steve Kerr aren't afraid to discuss social justice. Melissa Rohlin explains their desire to speak up.
5 days ago