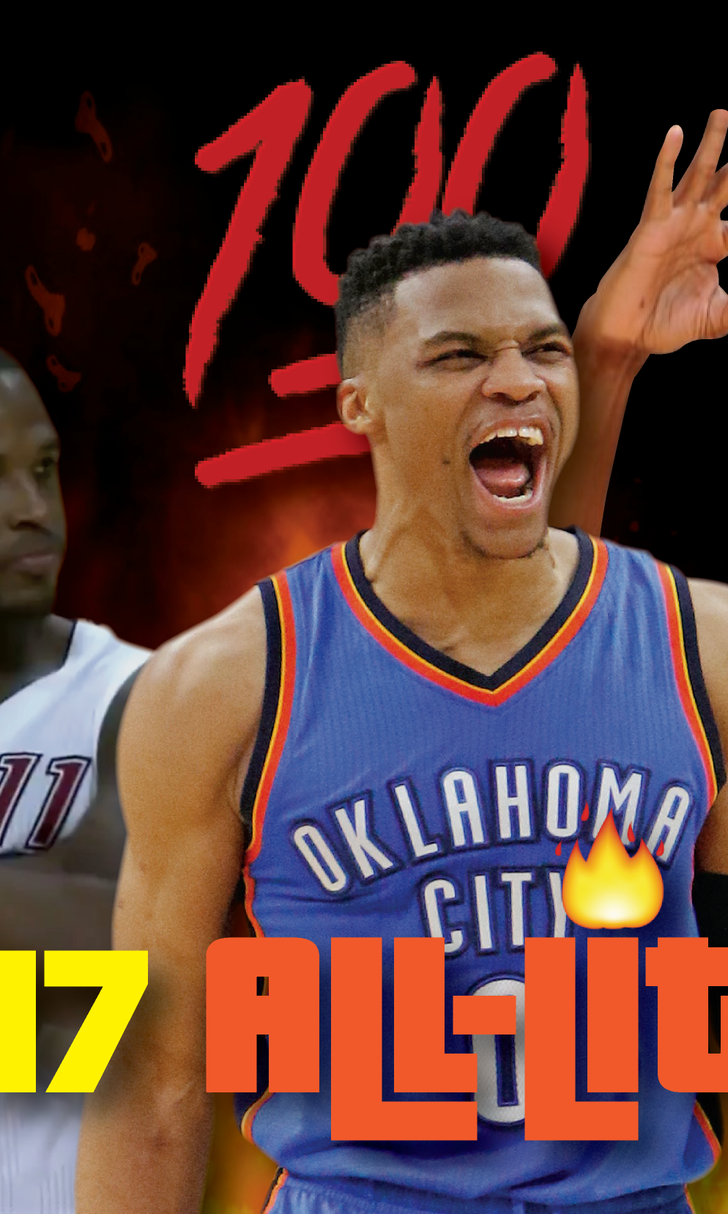 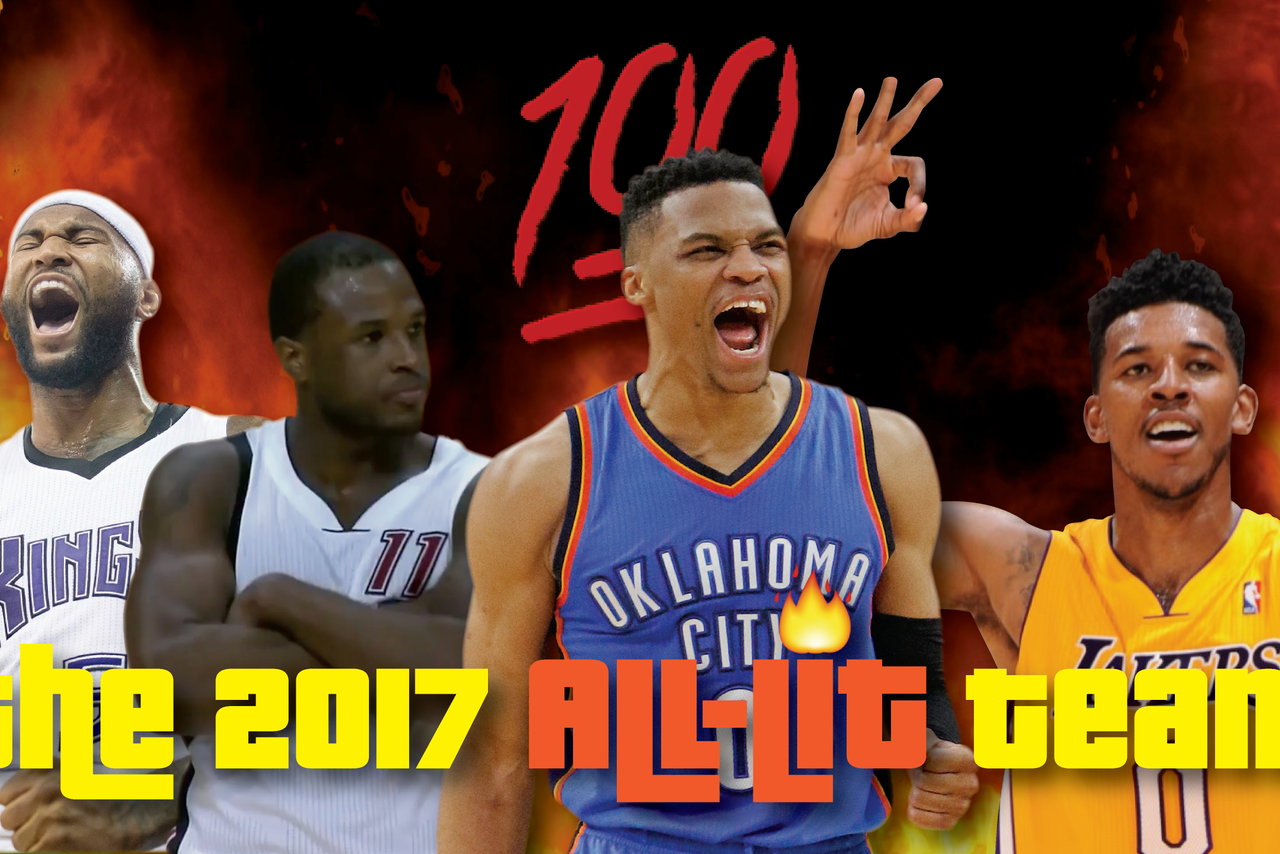 The NBA All-Star Game is nigh, meaning it's time again to select our annual All-Lit Team — a handpicked cabal of the most brazen bucket monsters and shoot-your-shot-artists the NBA has to offer.

Being selected for the NBA All-Lit Team is both an honor and an experiment, as the All-Lit selectees are immediately put on the same NBA 2K roster in an attempt to find out what happens when you build an entire NBA franchise out of pure basketball cocaine and then blow it in the league’s face for an entire season.

Would it succeed? Fail? Get really talkative for 20 minutes and then disappear back into the bathroom?

The first step, of course, was selecting the crew for this voyage. These are your 2017 NBA All-Lit All-Stars: 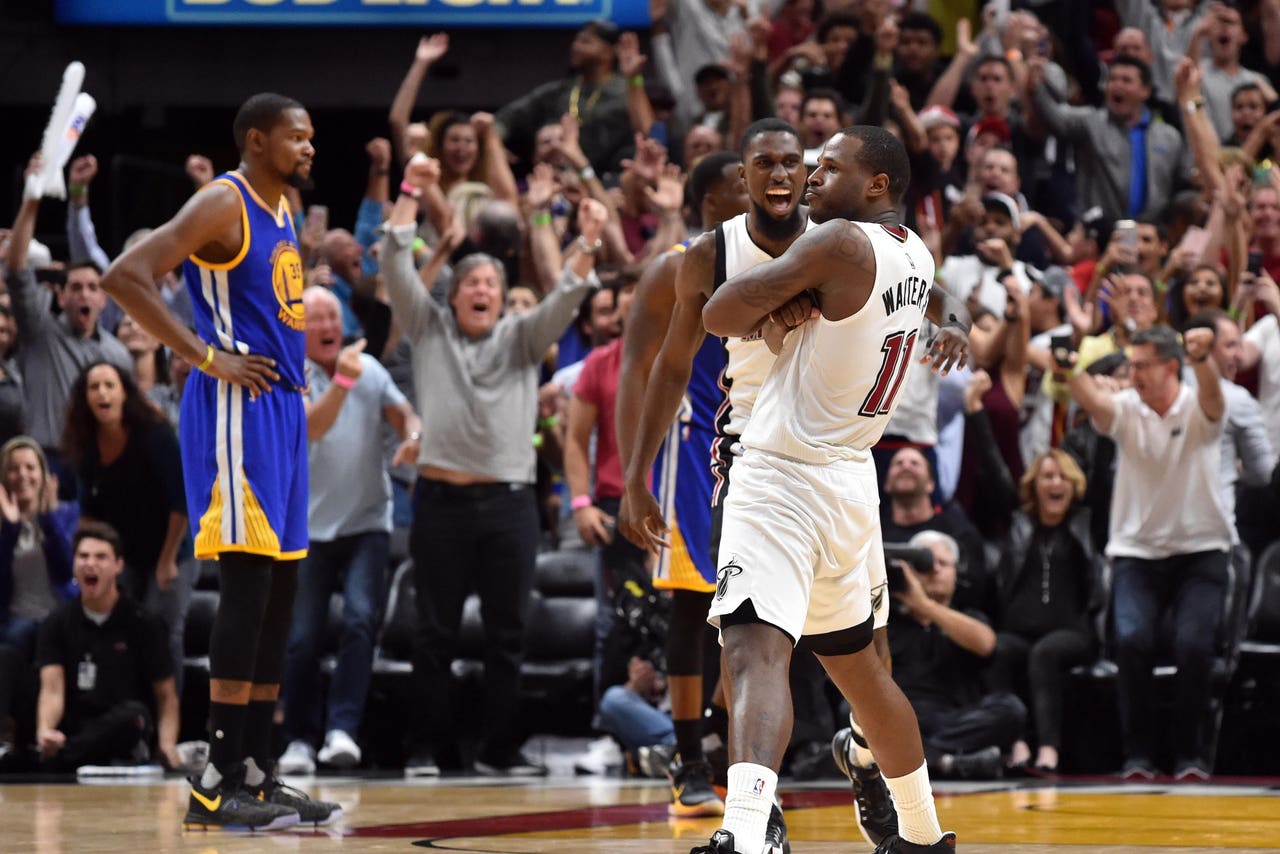 “The Internet's shooting guard” is currently in the midst of his most Waiters-y redemption tour to date.

Fresh off the #SummerOfSwag, Nick Young is in the midst of personal renaissance and achieved personal nirvana by stealing a teammate's pass to hit a game-winning shot. 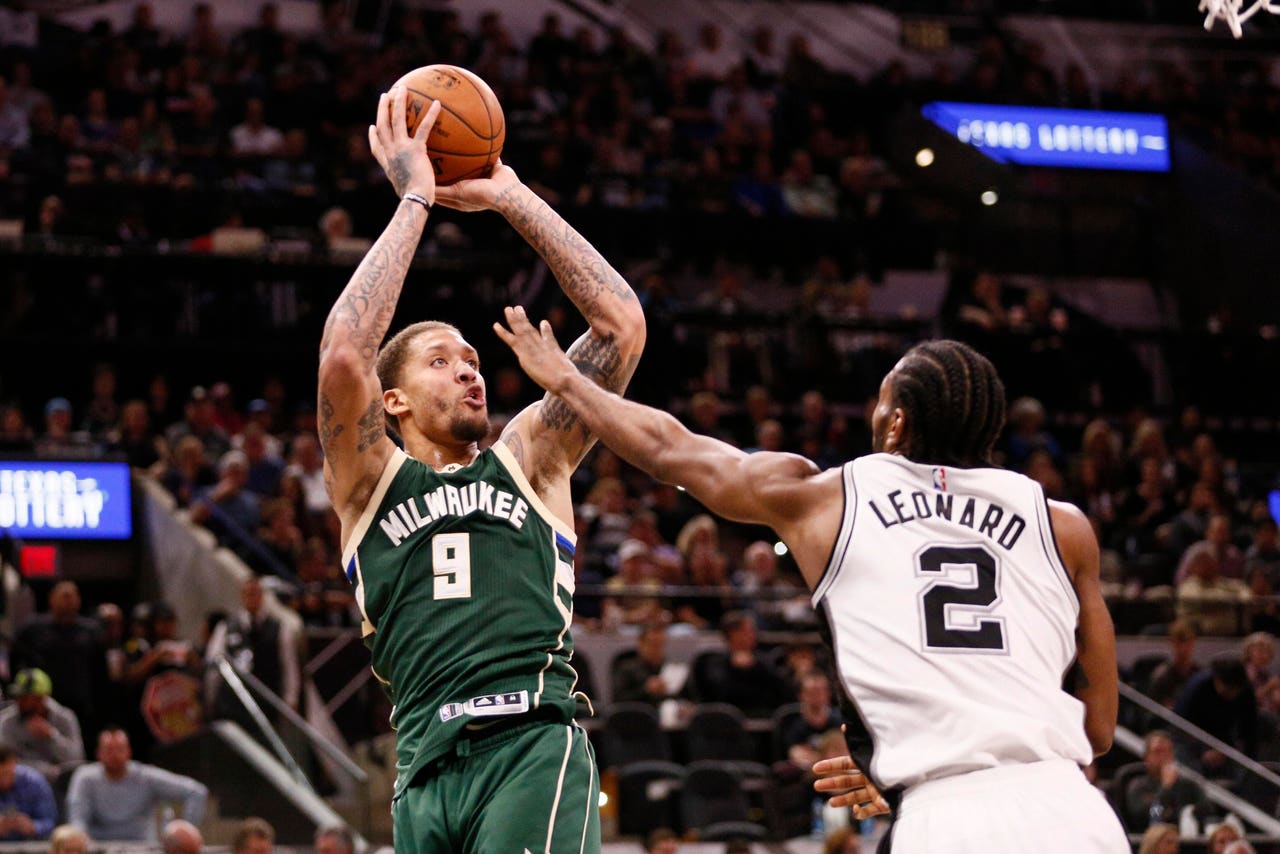 Voted most [huge plume of the Alternative Wax wafts out of speeding Scion TC].

Leads the league in technical fouls, Trill Shooting Percentage (TSP) and Games Kicked Out Of and Then Let Back In.

With our roster selected, it was time to bring this beast to life in NBA 2K17 and pray my console could withstand it. 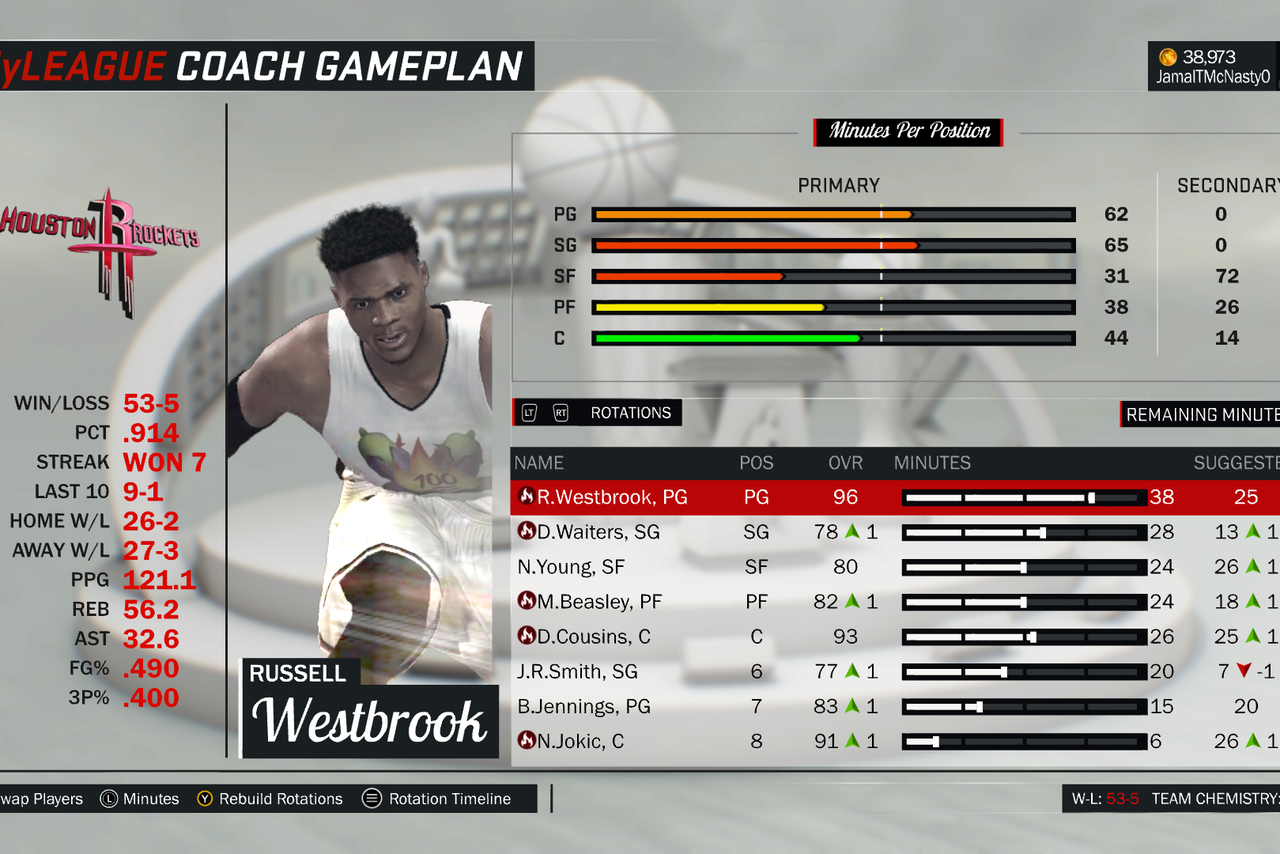 The first and most challenging part of creating the 2017 All-Lit Team was actually getting all these mutants on a single roster without creating a larger disturbance in the Force.

Guys like Russ and Boogie can't be moved from their team without changing the entire NBA landscape, so after migrating the All-Lit Team members onto the Houston Rockets (who for the second year running had the most All-Litters already on their roster), I had to fill the vacuums left behind.

This required recreating players like Westbrook and Cousins and putting them back in their proper place, which I did by taking historic NBA players and tweaking them to approximate the player I needed to clone. I tinkered with prime-level Tim Hardaway to create "Russell Westbrook D’Unlit," and chopped and screwed Magic-era Shaq to make a placeholder Boogie. I then dropped these street-legal versions of NBA stars back on to their rightful teams, because fair is fair and I am a gentleman of simulated basketball warfare if nothing else.

After this, it was on to a new frontier for the All-Lit franchise:

For the first time, I created jerseys for the All-Lit All-Stars. My aesthetic goal was for the team to look stylish while still adhering to the All-Lit ethos of “I feel bad for our country but this is tremendous content."

Personally, I think I nailed it.

Also, a few renovations were made on the team’s home court. 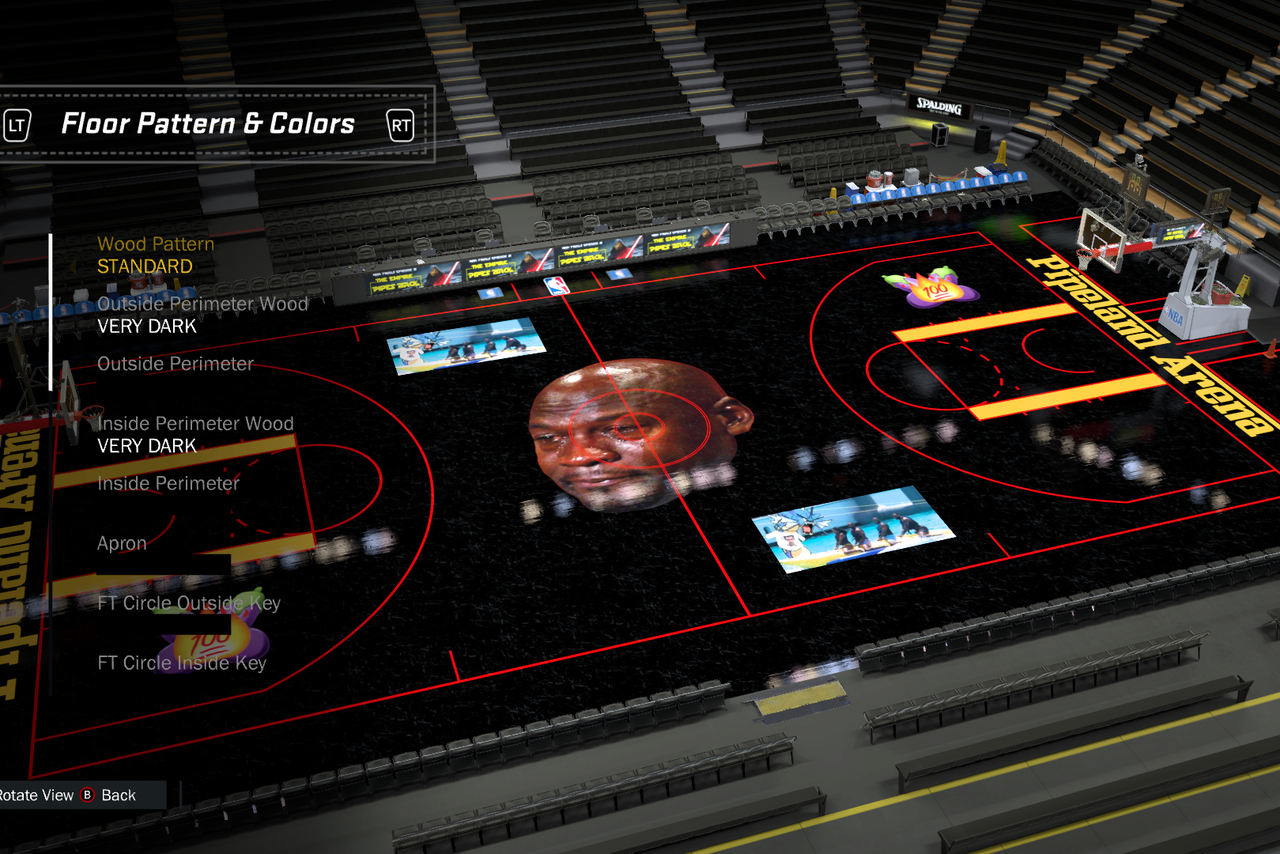 With the team set, the jerseys printed and the hardwood polished, it was time for the rubber to meet road. It was time to unleash the All-Lit All-Stars.

Season 1: WHERE IS YOUR GOD NOW?

As expected, the All-Lit team is destroying everything and everyone set in its path.

The team starts the season with 21 straight wins, and by the All-Star break, the All-Litsmen are 48-10 and tearing the league orifices for which we must find names. They’re the No. 1 team in the West and, unsurprisingly, first in the league in points scored per game (119.7).

More surprisingly, a team made up of 90 percent kamikaze chuck artists is 15th in the league in points allowed (102.9 per game). Less surprisingly, seven out of 15 players on the roster are simultaneously “on fire,” which I’ve never witnessed before in 2K. 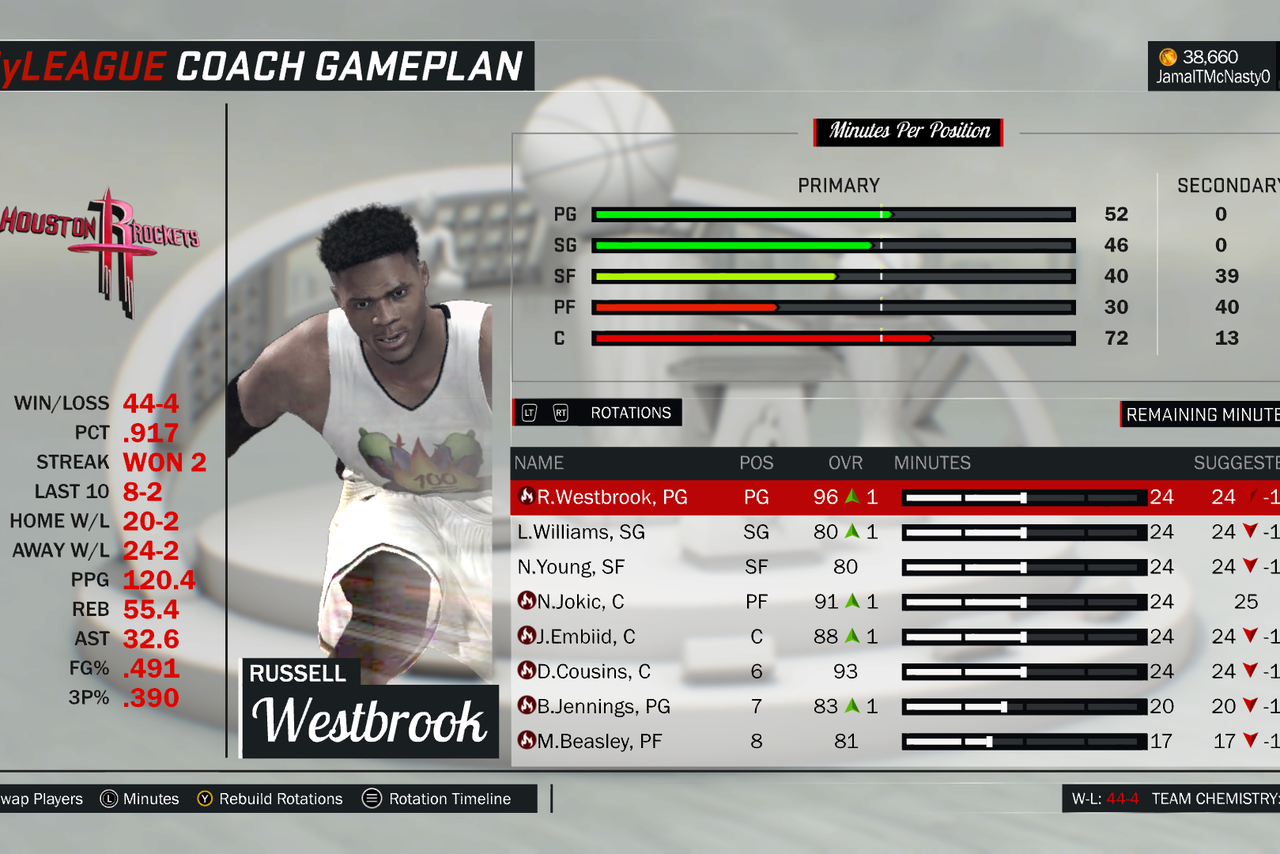 The best number, however, is 160—which is the team's season-high scoring number for a single game thus far. The All-Litsmen hung 160 on the Kings in December at the Golden One Center, and I presume the area is still roped off due to radiation.

But now is not the time to rest on laurels. The postseason approaches and Finals showdown with LeBron and the Cavs is looking inevitable, and All-Lit nation will accept nothing short of raising the Larry O’Brien trophy this year.

Westbrook makes 1st Team All-NBA but has MVP stolen from him by Durant. Sufficed to say, digital Westbrook was not happy about that: 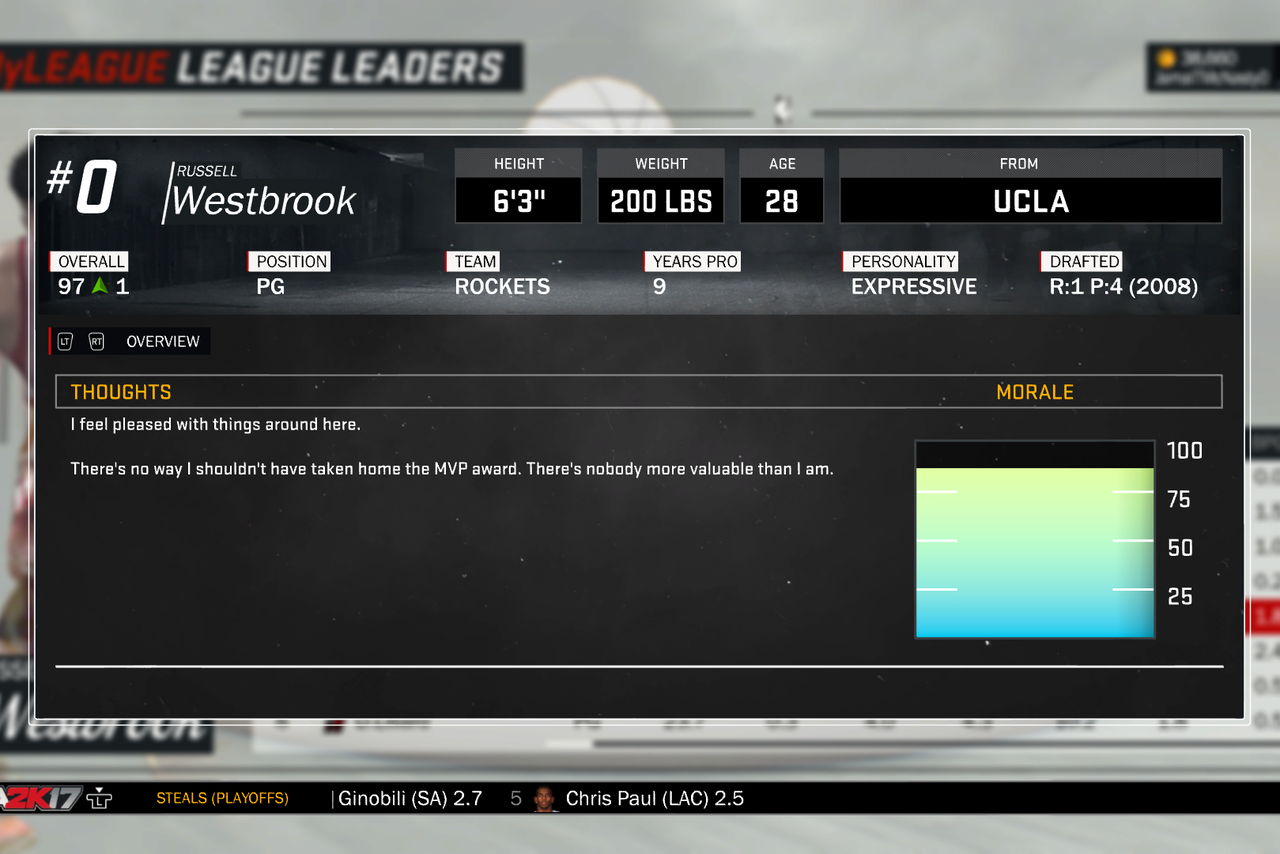 Next came the white-knuckle business: simulating the playoffs.

The All-Litsmen handle the eighth-seeded Timberwolves as humanely as possibly with a gentleman’s sweep. They then proceed to emasculate the Spurs out of presumed spite for their entire way of life.

The only real nail biter comes against Portland in the Conference Finals, which boiled down to exchange of cannon fire between the All-Lit Militia and the Trail Blazers backcourt. But where Portland has two interplanetary rail cannons in Dame and C.J. McCollum, the All-Lit Legion has an entire air hangar of pride-seeking SCUD missiles. The All-Litters overwhelm Portland and advance into the Finals against Cleveland. Now the real work begins.

Finals Game 1: MY LIFE FOR AIUR

The Litsmen win, riding a mammoth triple-double from the Brodie (27 points, 17 rebounds, 12 assists) to victory. Swaggy lofts in 21 and the Beaz billows forth 17 of the dankest and most unexpected points.

After a start to the series that felt like sacking Troy with a Trojan Michael Beasley, the Cavs strike back with a vintage Kyrie Irving air raid.

Uncle Drew drops 39 and seven dimes on the Litsmen, and LeBron acquits himself with an extremely Bron-ish 25 points, 7 boards and 12 assists. This is also the point in the series where I realize that while assembling the All-Lit roster, I swapped Eric Gordon onto the Cavs for J.R. Smith and just left him there.

‘Bron: 34 points, 10 assists. One monster pouch dropped on collective nape of our necks.

The All-Litsman lose, bringing the series to 2-1.

Death, taxes and Dion Waiters’ biannual, Hefty Bag onion game. These are the only constants we have.

Unfortunately, Waiters’ big night (27 points, zero assists) comes at the cost of a big drop-off for Russ, who fails to go Super-Saiyan for the first time in the series. Cleveland wins and I realize it’s time for me to take off the warmups and take the sticks. Right out the gate I am destroying.

We’re barely a minute in, but shots are falling and Swaggy is giving LeBron the work.

But All-Lit begins to cool off, shots stop falling, and we go into halftime down 39-31. Cleveland charges out with murderous intent in the second half. Kyrie begins to Kyrie and LeBron is dunking on everything that moves.

I fight back, but deep in the third comes the back-breaker: LeBron misses a three in transition, Westbrook throws himself on the ground instead of rebounding, and J.R. D’Unlit buries a baseline J.

Hoisted by my own J.R.

I rage quit and sim to end. The All-Lit team loses and magic is dead.

We came close to a chip, or closer than any team built entirely on contested field goal attempts and Flubber sauce ever should come to winning an NBA championship. And I'll have you know: I continued the team into the next year and, with zero meddling, the All-Litsmen won it all in 2018.

Westbrook also finally got his regular season MVP and averaged a triple-double. God is good. (Most the time). 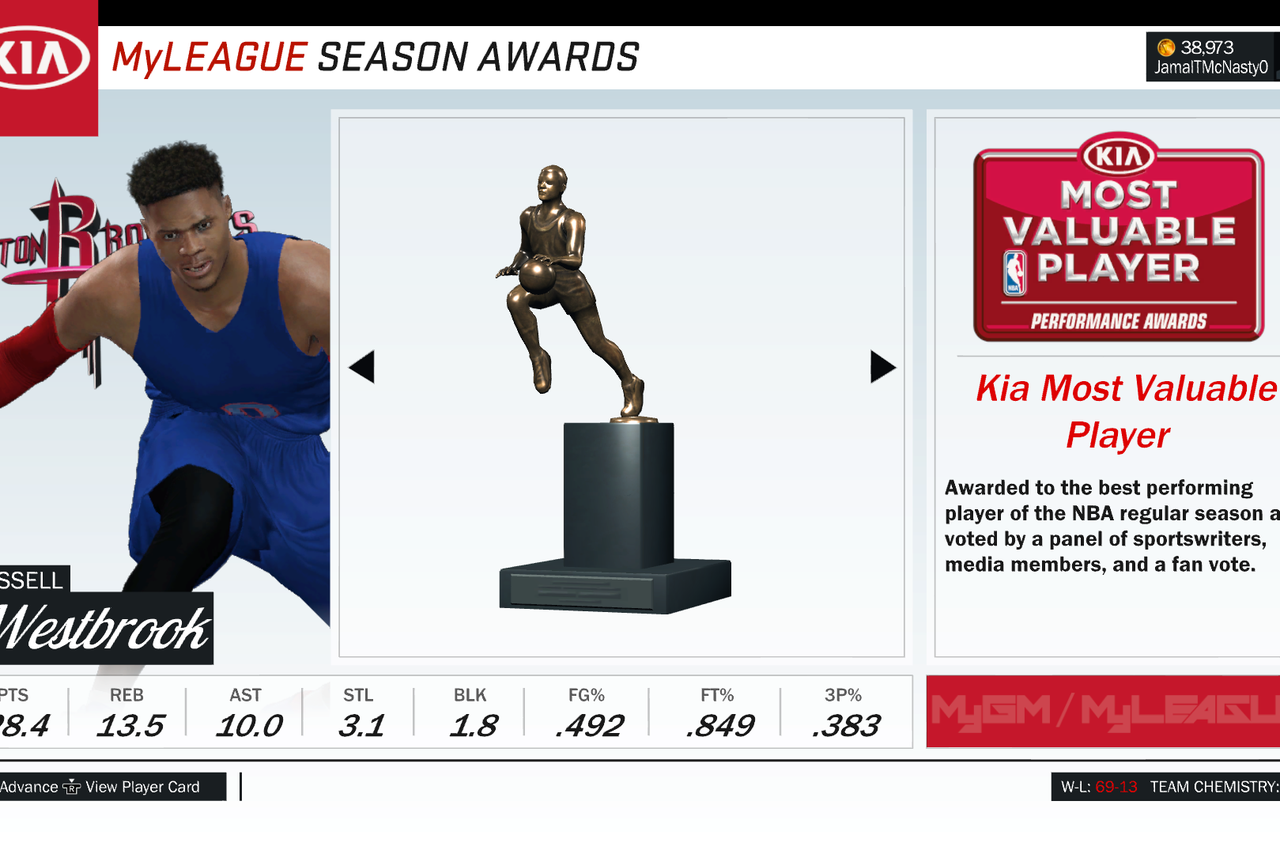 Would it have been sweetest to win that first chip? Yes. But the 2017 All-Lit team is, by far, the most successful and dangerous All-Lit team we’ve had to date.

So it might not be our year yet. But the tides are turning in professional basketball, and the 2018 championship is looking mighty flammable.

Dan is on Twitter doing the capital J stuff.

Have Rings, Will Travel
After helping the Lakers win the title, Danny Green spoke to FOX Sports' Melissa Rohlin about being traded to Philly and his NBA journey.
4 hours ago