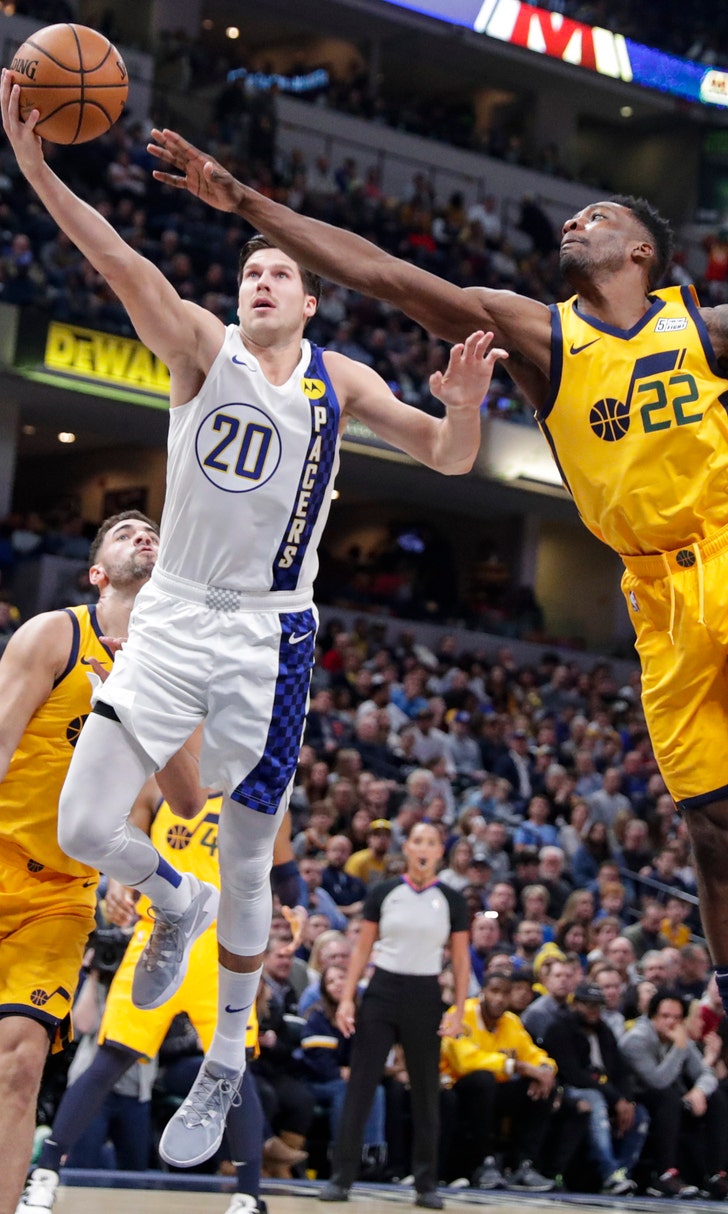 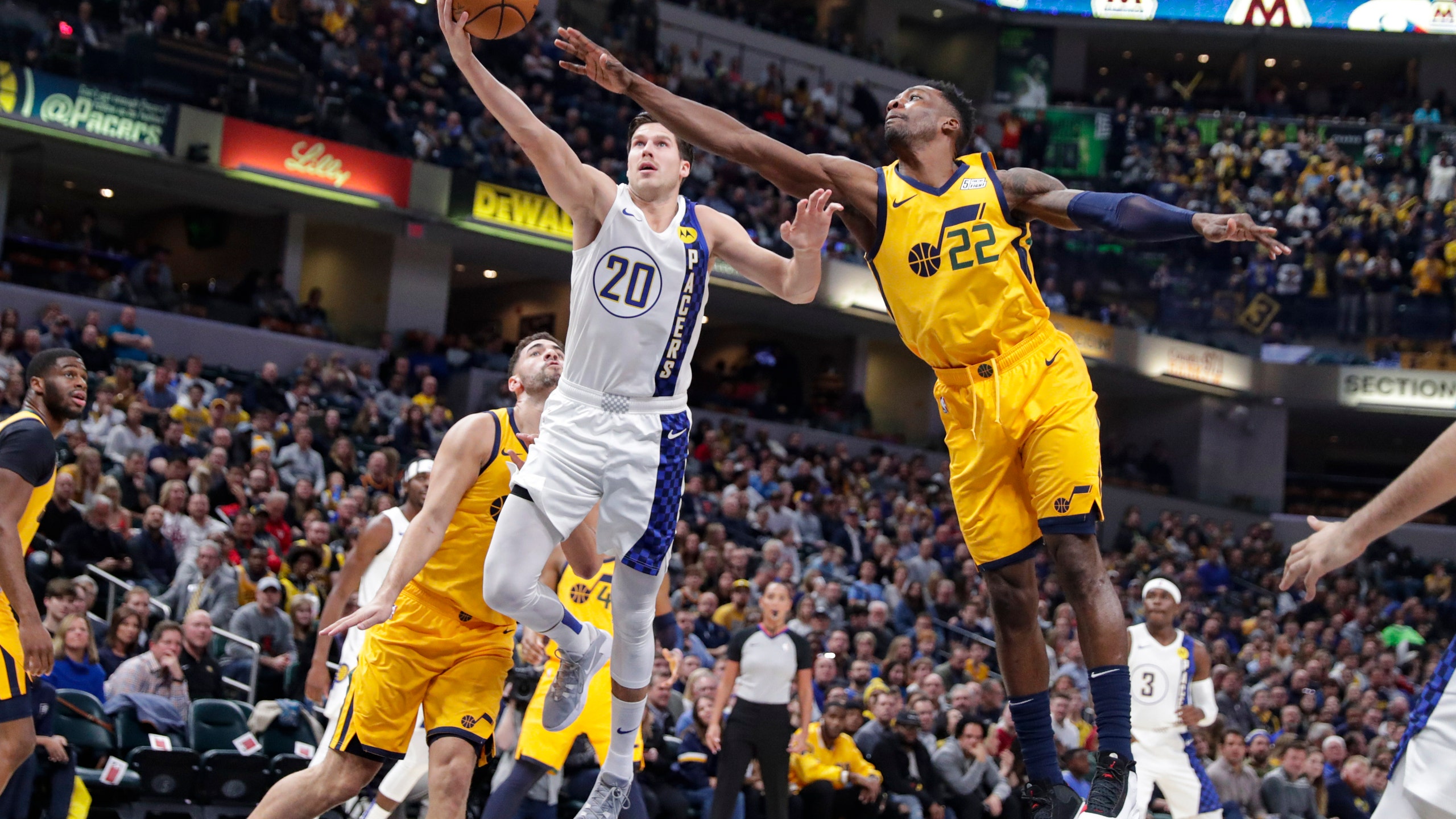 Pacers use balanced attack to pull away from Jazz 121-102

They’re moving the ball, sharing the scoring burden and finding ways to win.

On Wednesday night, Domantas Sabonis and T.J. Warren each scored 23 points and Malcolm Brogdon added 22 to spur a decisive fourth-quarter run that helped Indiana pull away from Utah 121-102.

“When you have a number of guys who can score and they’re offensive-minded, what you have to get is that team to sacrifice,” Pacers coach Nate McMillan said. “These guys are sacrificing right now.”

And it’s showing up in the results.

Since losing their first three games, the Pacers have won 11 of 14 including four straight. Four of their last five wins have come by double digits and they’ve done it by taking advantage of their collective strengths.

Sabonis again did the dirty work inside, grabbing 12 rebounds for his 12th double-double this season.

Brogdon and Jeremy Lamb took care of their job in the backcourt by flirting with their own double-doubles. Brogdon added eight assists while Lamb had 18 points, eight rebounds and six assists.

Defensively, the Pacers were just as proficient. They held the Jazz to 43.4% shooting and just 10 of 32 on 3-pointers while Bojan Bogdanovic and Donovan Mitchell accounted for more than half of Utah’s total points.

Bogdanovic, who left the Pacers last summer in free agency, scored 30 in his first game back. Mitchell added 26 and the Jazz spent the entire second half futilely chasing the Pacers before losing its second straight game.

“They felt comfortable the entire time,” Mitchell said. “We’ve got to get over screens, helping, the bigs, the guards, it’s really all of us just communicating (better on defense) and we’ll fix it.”

At least, Utah made the Pacers earn this one.

When it appeared Indiana might run away after closing the first half on a 12-2 spurt and opening the second half with a 3-pointer from Myles Turner to take a 56-43 lead, Bogdanovic and Mitchell helped the Jazz respond. They combined for five of Utah’s seven 3s in the third quarter, helping them scramble back within 83-80 with 2:03 to go.

But Indiana rebuilt its lead by scoring the final six points of the quarter and finally put the game away with that decisive 18-5 run, which began with 7:45 left to play.

“We came ready to play,” Brogdon said. “We competed from the first minute to the last. The second group came in and did a great job. We were consistent all the way through.”

Jazz: Have lost three straight in the series and back-to-back games for the third time this season. ... Two-time defensive player of the year Rudy Gobert returned after missing the previous two games with a sprained left ankle and had 14 points and 13 rebounds. ... Joe Ingles scored 12 points and Mike Conley had five points and five assists in his hometown.

Pacers: Brogdon missed his first free-throw attempt of the game, ending a streak of 44 consecutive makes that began in the season opener. ... T.J. McConnell scored 12 points off the bench. ... The Pacers are 3-0 at home against Western Conference foes this season, winning each by at least 12.

Jazz: “We need to be better,” coach Quin Snyder said. “I thought they were the more aggressive team and that showed by the way they attacked the basket.”

Pacers: “We’re starting to establish ourselves,” McMillan said. “We were playing against a really good group and I thought we were solid, both groups, for 48 minutes. I thought we made them work to score.”

Jazz: At Memphis on Friday night.

Utah Jazz
share story
those were the latest stories
Want to see more?
View All Stories
Fox Sports™ and © 2021 Fox Media LLC and Fox Sports Interactive Media, LLC. All rights reserved. Use of this website (including any and all parts and components) constitutes your acceptance of these Terms of Use and Updated Privacy Policy. Advertising Choices. Do Not Sell my Personal Info