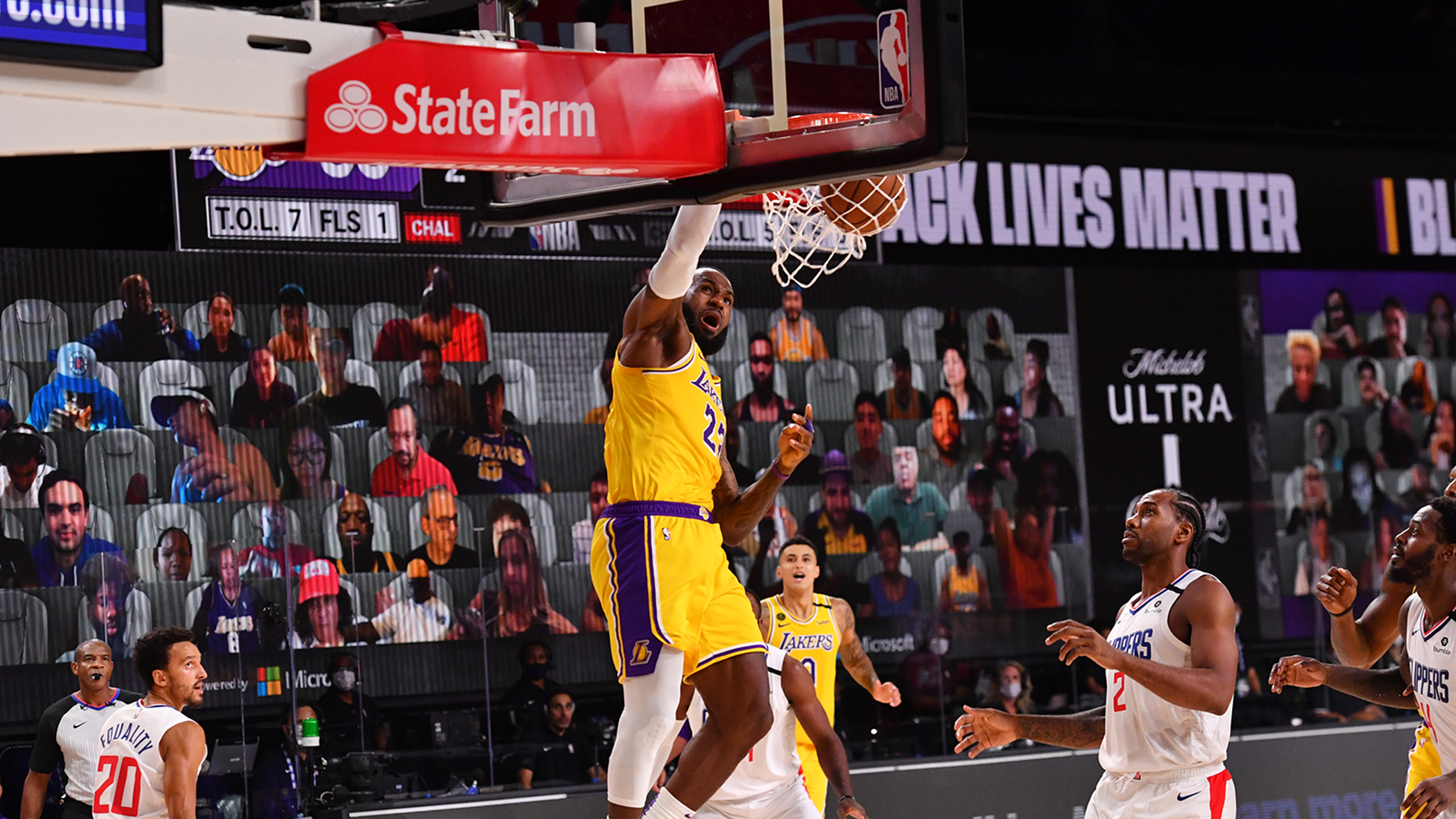 NBA's Hiatus Was Worth The Wait

“This league!!!” exclaimed Trae Young, watching from home, with a mix of wonder and excitement as the NBA burst back into action on Thursday, defying logic by managing to be both totally different and completely the same as before.

Did I say, different? In some ways the Association was virtually unrecognizable, or at least recognizably virtual, as things got underway with a pair of games on Thursday night. The resumption of the NBA season ended close to five, long, basketball-free months during which the world has changed beyond our comprehension.

Of course it was different. It has to be different, or it wouldn’t be happening at all. Like a science fiction movie, fan seats were filled with avatars of supporters from around the world.

Do you think it looked unusual? How could you not? Everything looks unusual when it happens for the first time, but in remarkably short order, we are used to it and rarely think of it anymore.

The crowd noise was manufactured, and you could hear not only squeaking sneakers but snarking superstars, with some chit chat and trash talk audible over the telecast.

“Let’s start with the premise that we prefer watching NBA games with fans in attendance and work from there,” wrote USA TODAY Sports’ Jeff Zilgitt. “Given the circumstances of a global pandemic and the league trying to do everything it can to finish the season safely and limit COVID-19 cases on its Disney campus, we can still enjoy fanless games on TV – in all their awkwardness, too.”

There is a home team in name only, and therefore, no proper home advantage. When play stops, the pauses do feel longer and more drawn out than normal, when there is a swath of sensory distractions to take your mind elsewhere.

And yes, they are playing competitive basketball on the cusp of August in a tournament that is not the Olympics, and they’ll be doing so for months to come.

Yet by the end of opening night, it didn’t feel so different at all. Because while we celebrate everything that surrounds the NBA such as the player personalities and foibles, their outrageous fashion statements, the Twitter beefs, the showbiz and the scandals, it is ultimately about basketball.

Given that this is in some ways basketball in its purest form, the changes are more about us, the people who watch, than those who play. The NBA is back and the greatest basketball players in the world returned to the court, playing the sport they love. That’s the part that matters, not all the surrounding stuff.

Of all people to score the first basket since the resumption, it was Rudy Gobert, the Utah Jazz center who tested positive for the coronavirus, prompting the shutdown. It was a coincidence, but not an unpleasant one.

The first three quarters of the Los Angeles Lakers’ victory over the Los Angeles Clippers were a bit of a drag, with too many fouls, a fair smattering of rustiness in the player’s elbows, and a sense that things had better improve or this wasn't going to be much fun.

Things did get better, of course, as they typically do. We are paying close attention now, but let’s remember that the NBA itself added a sales option to its league pass feature in 2018 where you could buy just the fourth quarter of games, because that's where much of the key action normally is.

The truest reminder that what is most important about basketball’s resumption is the game itself, and it was proven by what we were talking about afterwards. It was about the big name stars, because it always is. The biggest narrative to come out of the Jazz beating the New Orleans Pelicans was that Zion Williamson was on the bench in the closing minutes.

Later, the chatter was about Paul George and how the layoff appears to have cured his injury woes, and how Anthony Davis hadn’t missed a beat after putting up 34 points.

And we are talking about LeBron James, because that’s what basketball fans do. They talk about their biggest star, especially when he gives them a highlight reel moment to talk about.

After a relatively poor night, James ignited late, scoring the winning bucket off his own rebound in the final moments.

“Through the first three quarters, he deserved a flat out F (grade),” FOX Sports’ Skip Bayless said on Undisputed. “Then, all of a sudden, he changed his shoes and I think it changed his mindset. Overall, I’d give him a C-plus."

As much as we enjoyed seeing the Lakers and Clippers square off, it wasn’t, in truth, much of a precursor to the playoffs and what shapes up as a likely Western Conference Finals showdown. The two key members of the Clippers’ stacked second unit, Lou Williams and Montrezl Harrell, were both missing.

It wasn’t the highest quality of games for much of the contest, and it could have ended in a dud. The NBA’s big return could have been devoid of drama at the very moment when all eyes were upon it.

We could have seen the big stars falter. James could have missed his final shot. It could have fallen flat enough to make that long wait not seem worth it.

Nah, not here. Not in this league.

Big Battle
Who would you rather have, Joel Embiid or Nikola Jokic? Skip Bayless and Shannon Sharpe opened up the debate on "Undisputed."
39 mins ago

At His Bearded Best
In the midst of the Brooklyn experiment, one of the Nets' "Big 3" is remarkably making a case for the league's highest honor.
6 hours ago

Bird is the Word
Mavericks star Luka Doncic continues to draw comparisons to some of the league's greatest. Just how brightly will this star shine?
23 hours ago
those were the latest stories
Want to see more?
View All Stories
Fox Sports™ and © 2021 Fox Media LLC and Fox Sports Interactive Media, LLC. All rights reserved. Use of this website (including any and all parts and components) constitutes your acceptance of these Terms of Use and Updated Privacy Policy. Advertising Choices. Do Not Sell my Personal Info