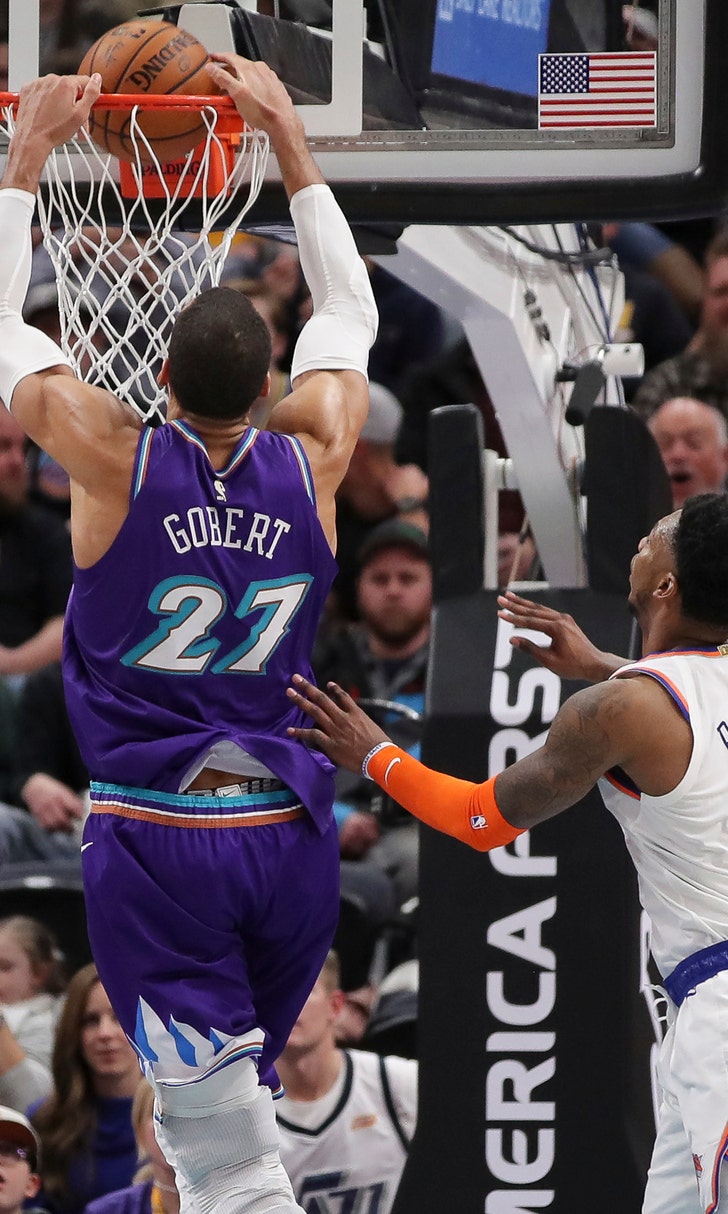 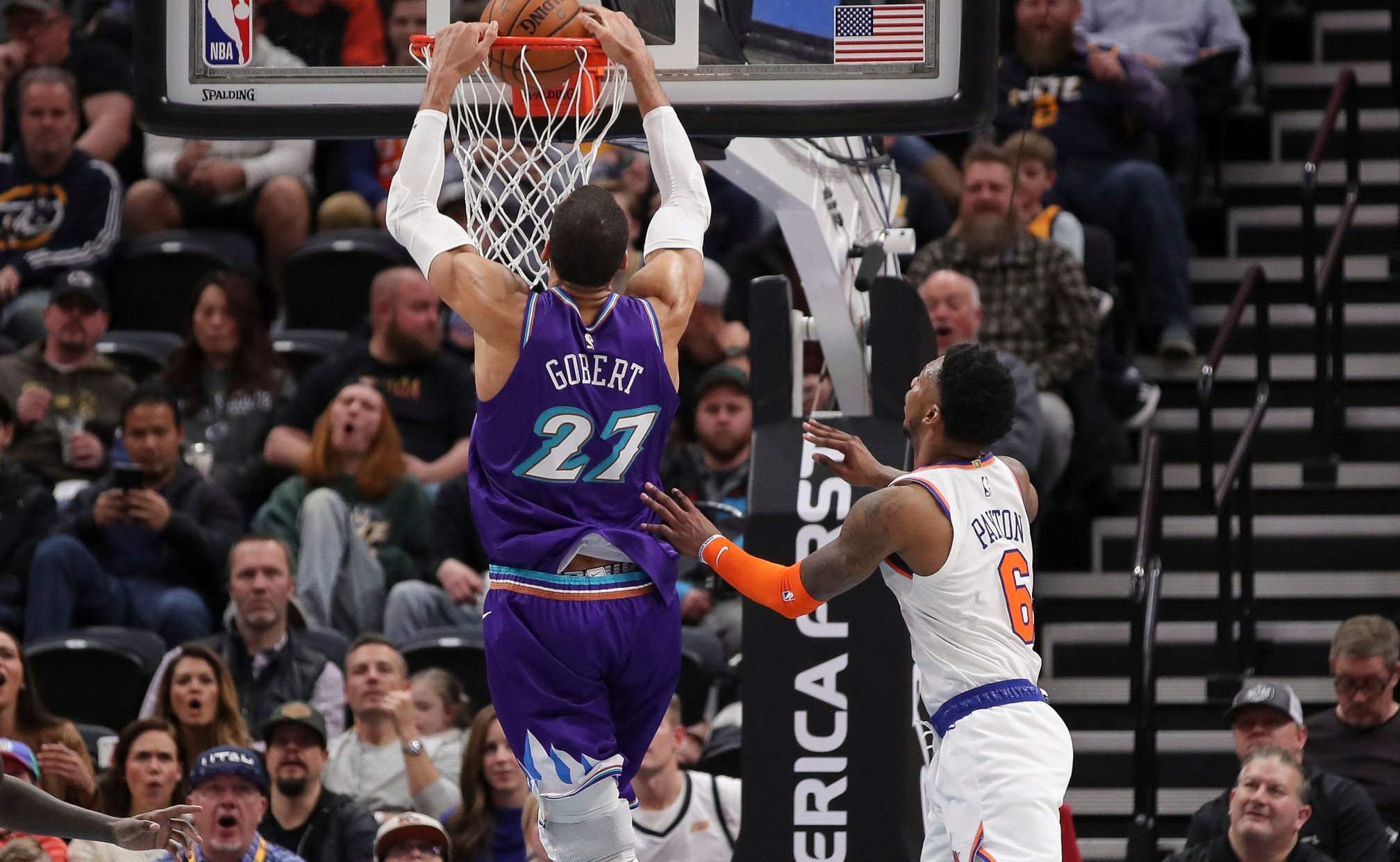 Mudiay scored a season-high 20 points against his former team and Rudy Gobert added 16 points and 16 rebounds to power the Utah Jazz to a 128-104 win over the short-handed New York Knicks on Wednesday night.

“I thought I was a pretty smart player until I came here. Everybody told me what kind of coach Quin (Snyder) was before I came here, so I bought in from day one,” said Mudiay, who believes his basketball IQ has risen a few points.

Despite averaging a career high 14.8 points for the New York Knicks last season, the improvements and nuanced touches he’s added to his game were all on display against the Knicks.

“He didn’t force himself on the game. More than anybody, he played the right way. He made good decisions,” Snyder said.

Mudiay played for the Knicks last season before signing with the Jazz in the summer and “playing the right way” wasn’t a common descriptor of Mudiay’s game. He figured he’d be the backup in Utah but he came to get coached. Against New York, he made 8 of 12 shots, added four assists and played solid defense.

“I now know when to get my own and when to get everybody involved. I think that’s what a point guard needs to do,” Mudiay said.

Bojan Bogdanovic also scored 20 points and Donovan Mitchell had 16 in limited minutes for Utah, which has won seven straight and 12 of 13.

“For (Mudiay), it's just a matter of taking his time being patient. He's always aggressive getting to the rim. But now he's finding guys too," Mitchell said.

Frank Ntilikina had 16 points in 19 minutes and Bobby Portis added 13 points and a season-high 13 rebounds for New York.

The Jazz are making the most of a soft stretch of the schedule where most opponents are under .500, but none have been quite as hapless as the current Knicks.

Portis was fined $25,000 by the NBA earlier Wednesday for recklessly making contact above the shoulders of an airborne shooter in the Knicks' 117-87 loss at the Los Angeles Lakers on Tuesday.

He started against Utah as leading scorer Julius Randle missed the game for personal reasons and, again, was whistled for a flagrant foul. This time it was ruled a Flagrant Foul 1 as he whacked Bogdanovic across the forehead on his way to the basket.

Marcus Morris was out with a sore neck and Dennis Smith Jr. sat with an oblique strain, decimating the Knick bench.

On a back-to-back and last game of a four-game road trip — all losses — the Knicks looked tired and outmatched.

“We're in the mountains. You can't breathe,” RJ Barrett said.

Behind Gobert’s 14 points and nine rebounds in the first half, the Jazz sprinted to a 72-53 at the break and were never challenged the rest of the way.

“We had difficulty getting to spots at times, obviously, and I give them credit. Their defense was good. They dictated a lot of those things,” New York interim coach Mike Miller said.

Since Miller implemented more spacing and a quicker pace, the Knicks are scoring efficiently, even scoring 132 in a loss to the Los Angeles Clippers on this trip and 143 against the Atlanta Hawks three weeks ago.

However, there are glaring problems on the defensive side as the Jazz shredded the step-slow Knicks with a constant series of screens and ball movement.

“If you play the right way, the basketball gods are going to bless you,” Mudiay said.

Though Utah has thrived on good defense to win the past few seasons, the offense has now come around.

“The detail is there now, the accuracy. We’re throwing strikes … it’s all the little things, using foot fakes and shot fakes,” Snyder said. “The result is you play more efficiently and play with more precision.”

Pinpoint passes and tight movement has refined the offense and led to wide open shots and Mitchell said, “That’s what we expected would happen with time and we should only get better from here.

Eight Jazz players were in double figures and the reserves’ 57 points were a season best.

Knicks: New York is 0-19 when it is outrebounded as Utah had 50 to the Knicks’ 41 boards. ... The Knicks only attempted 11 free throws but made all of them. ... Elfrid Payton scored nine of his 13 points in the first quarter.