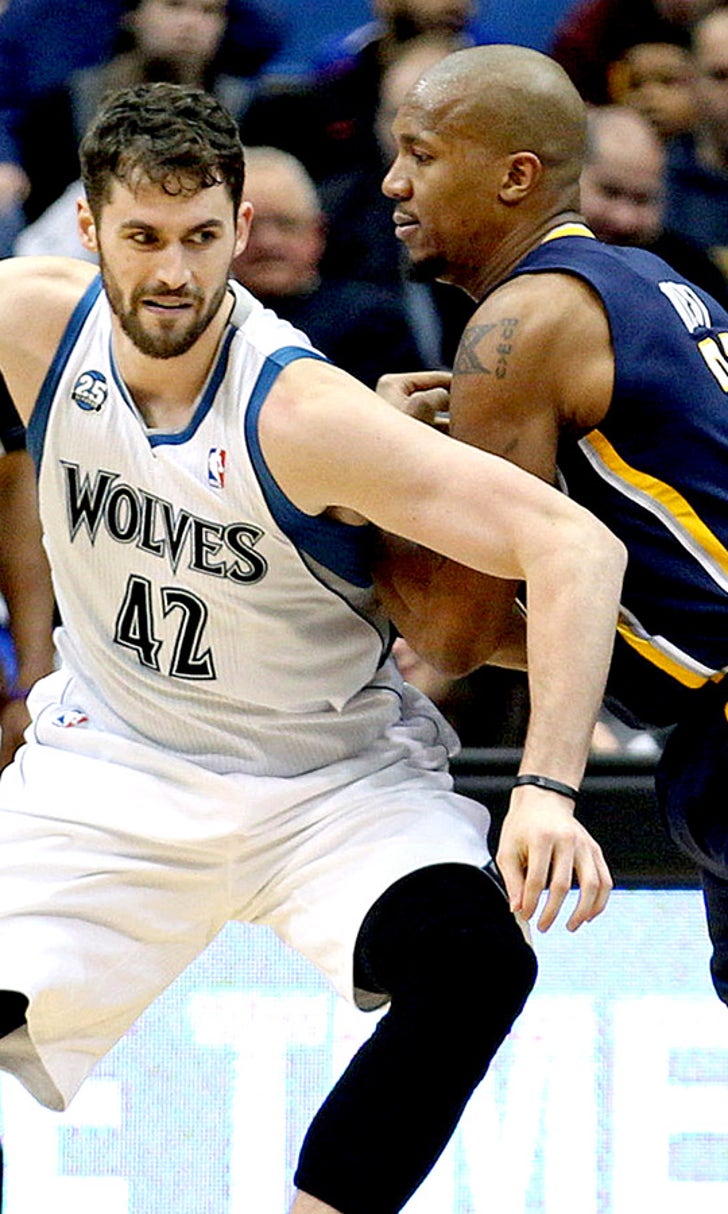 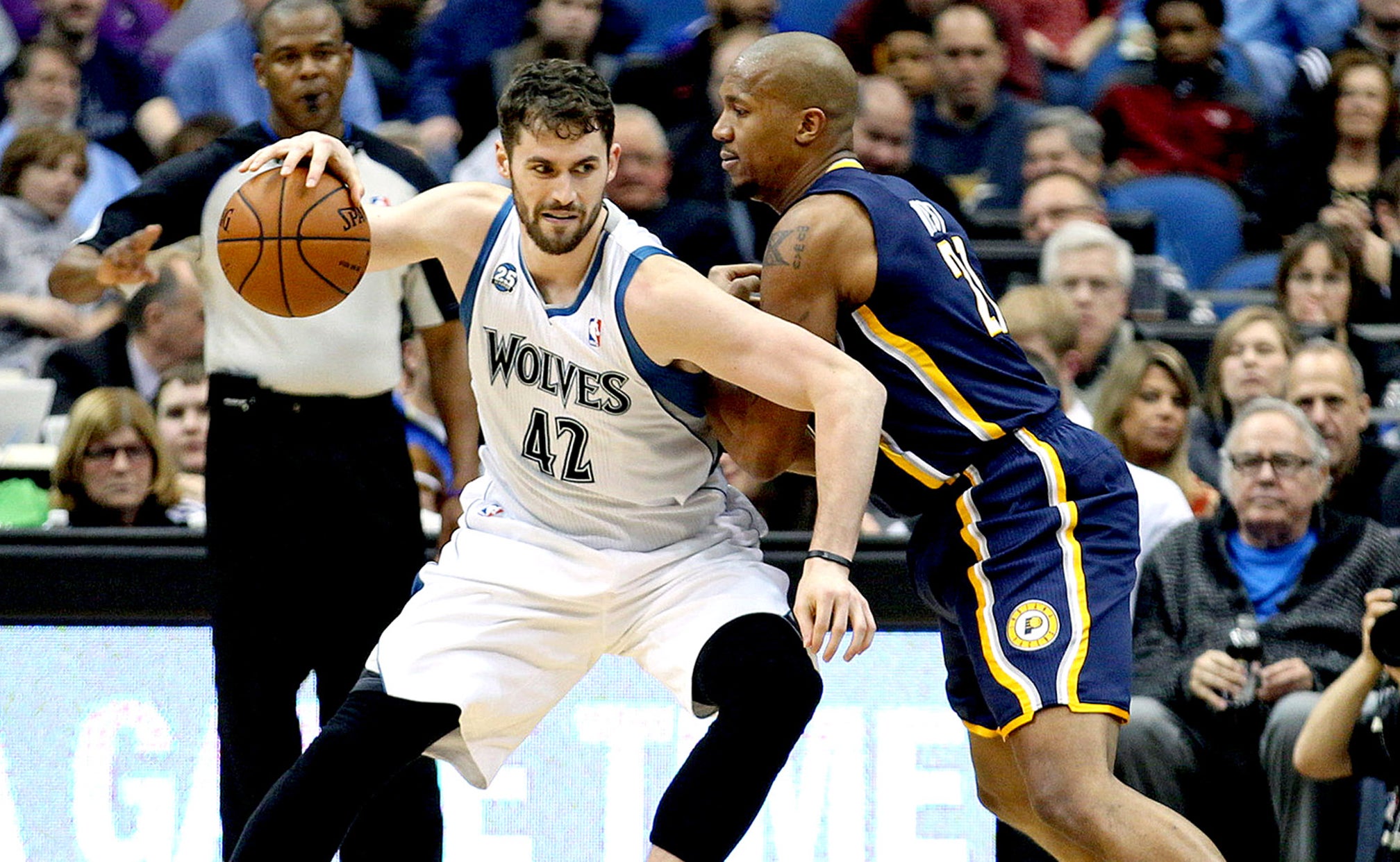 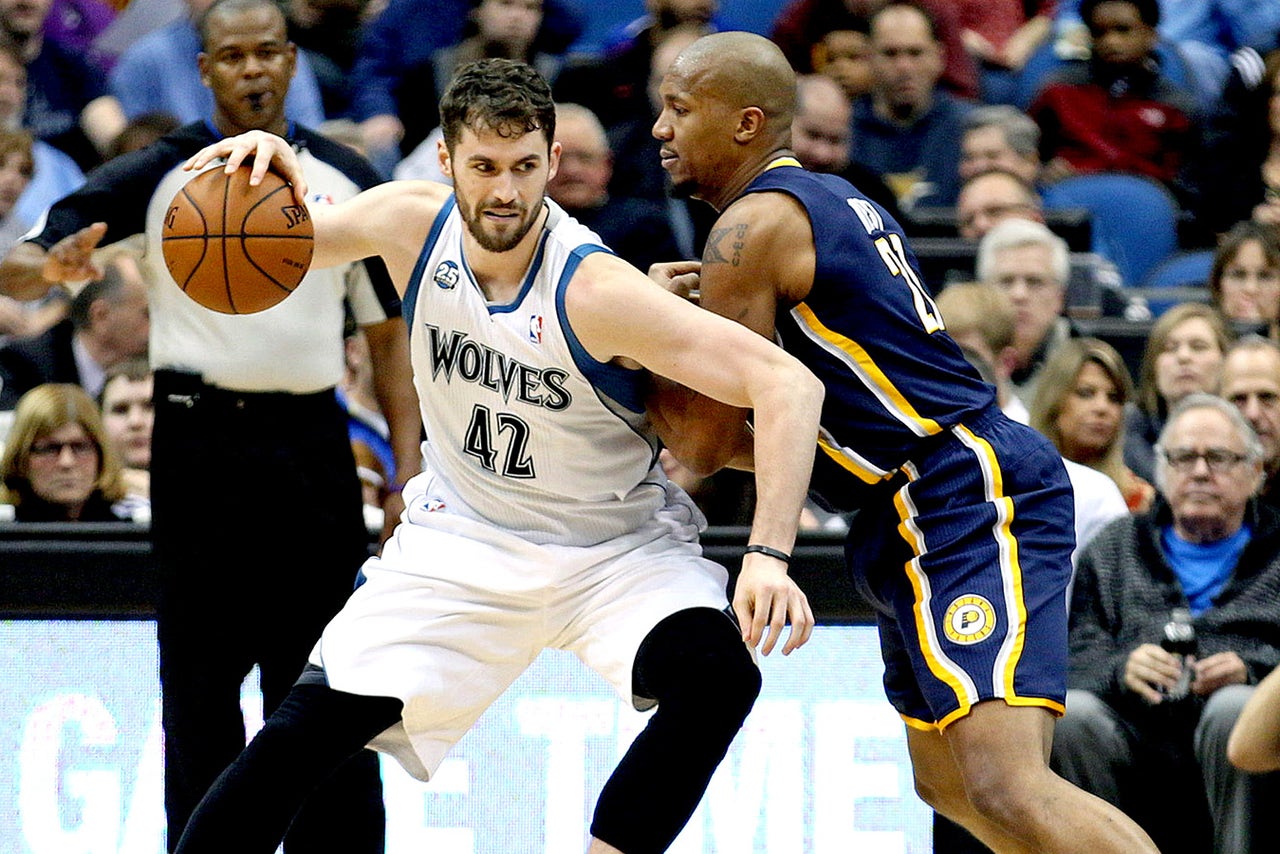 MINNEAPOLIS -- Kevin Love is used to carrying the beat-up Minnesota Timberwolves lately. This time, he finally had some help when he sat down to take a rest.

Love had 42 points and 16 rebounds, Ricky Rubio tied a franchise high with 17 assists, and the Timberwolves beat Paul George and the Indiana Pacers 104-91 on Wednesday night.

J.J. Barea scored 12 points off the bench as the Wolves took control early against the Eastern Conference leaders.

"This is one of my favorite wins of the season just because we played a very good team," Love said. "We did it without two key players and we fought hard."

George led Indiana with 35 points, but managed just two in the fourth quarter as the Pacers lost for the third time in five games, never once taking a lead.

"We just didn't have a whole lot of pop tonight," said David West, who scored four points and struggled guarding Love all night. "This is a game that I thought we would come out and play a little better than we did. We just didn't have it, just a step or two slow."

"I thought a lot of the shots he made was good defense," Pacers coach Frank Vogel said. "You have to give him credit. He is an extraordinary player and he played an extraordinary game tonight."

In their first game since the All-Star break as they try to make a late-season run and catch Golden State for the final playoff spot in the West, the Wolves came out running and led by 16 when Love came out for a rest 3 minutes into the second quarter.

Minnesota's reserves have been unable to hold their ground when Love goes to the bench recently, but they did fine on Wednesday. Barea, the subject of recent trade rumors, scored eight straight points during one stretch -- including a circus shot on the fast break over C.J. Watson that increased Minnesota's lead to 20 with 6:48 left in the half.

"When he gets his rest, we need other people to step up," Barea said. "Tonight, we were able to do that."

Love scored 18 points in the third quarter, including a jumper from just inside the 3-point line with 0.8 seconds left that pushed the Wolves' lead back up to 10 after an Indiana run.

Minnesota, playing without injured starters Nikola Pekovic and Kevin Martin, led by as many as 17 in the third quarter. However, with Love sitting to start the fourth, a jumper from Watson early in the quarter cut Indiana's deficit to five and gave the Pacers hope.

But again, Minnesota's reserves held on. Barea knocked down a jump shot in front of the Wolves bench to extend the lead back to 11 with 8:33 to play and the Wolves never looked back.

"Coach came to me and said he's going to give me a little bit of a rest," Love said. "He came to me during the timeout and said `These guys are rolling.' I said `Great, just keep them in as long as you need to.' Those guys just did a great job and really stepped up and took advantage of the opportunity tonight."

When Love returned, he reeled in a full-court pass from Rubio with his fingertips and slammed it home to give the Wolves a 98-84 lead.

Indiana went into the All-Star break stuck in a shooting slump, but shot 50 percent in a win over Atlanta on Tuesday.

The Pacers made just 8 of 22 shots to start Wednesday's game and finished at 40 percent.

"We will reflect on this," George said. "We really didn't want to lose and drop this game. But we have to move on. It's all about the next game."

George Hill finished with 13 points and Lance Stephenson had 10 despite missing his first six shots.

NOTES: Wolves coach Rick Adelman on how trade rumors impact players as the deadline approaches: "I think it definitely affects them. But it's all part of the business, especially now," he said. . . . The Pacers are 8-7 on the second game of a back-to-back. "Not really," Vogel answered after he was asked if he, George and Roy Hibbert have caught up on rest after All-Star weekend. "I'm a little more tired than usual. I'm sure those guys are. But it doesn't mean anything. Still have to go out and win games." The Wolves still don't know when Pekovic or Martin will return. Adelman said Martin will get his injured thumb examined again in the next day or two. . . . Wolves center Ronny Turiaf left in the fourth quarter with a right knee injury and didn't return.

Bam Lays the Boom on Boston
This version of Miami might not be the 'Heatles' edition, but LeBron will face a familiar franchise in this year's Finals.
3 hours ago

How The West Was Won
The Los Angeles Lakers are headed back to the NBA Finals for the first time in 10 years. Here is how they did it.
22 hours ago