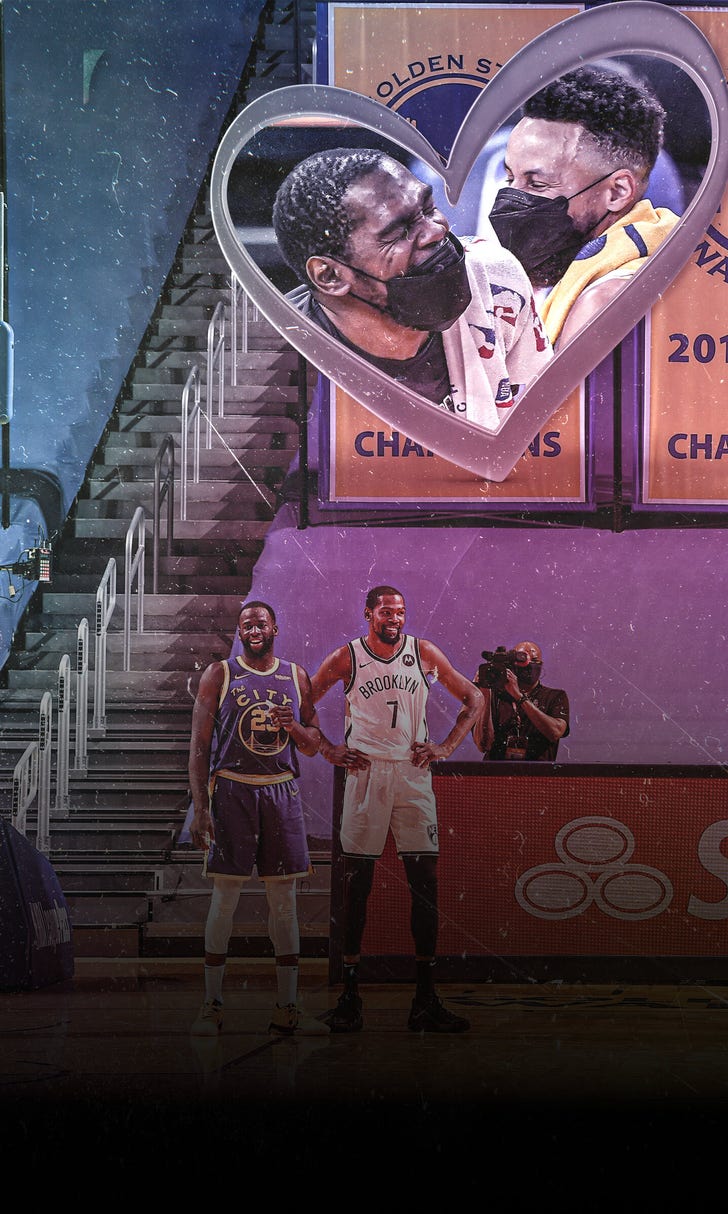 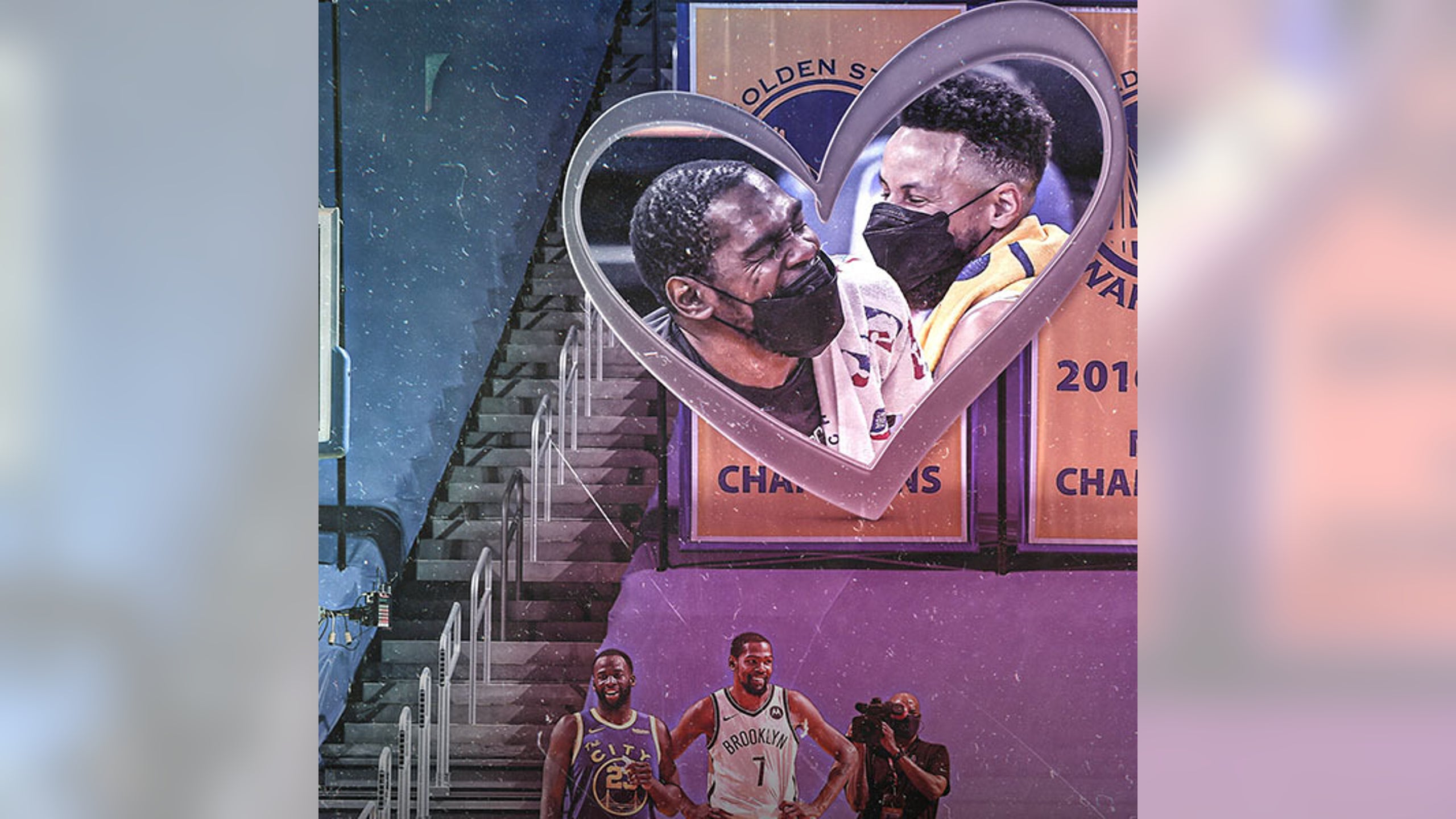 Kevin Durant was unmoved by the video tribute the Golden State Warriors played for him during his first game in the Bay Area since he left for the Brooklyn Nets in free agency in 2019.

The compilation of his stunning dunks, 3-pointers, dribble-drives and championship celebrations with his former teammates over those three years didn't make him tear up or inspire him to wax poetic about the past.

He didn't need the reminder.

"I think about those moments daily," Durant said after the Nets' 134-117 win over the Warriors on Saturday.

Durant was forever changed by his time with the Warriors. He gave the team three of his prime years — ages 28, 29 and 30 ⁠— pouring his heart out for the team in three NBA Finals appearances and winning two championships.

It was a short-lived stint, but it was powerful. Durant's time with the Warriors changed the way he thought about the game and taught him how to dominate while fitting into a system.

It still reverberates with him.

"Every single moment I had in this league, I try to think about it and analyze it and get better upon it," Durant said.

"My time here at Golden State was so much fun. It was such a big learning experience, especially learning the game of basketball could be different, a different philosophy. I'm going to take that with me for the rest of my life."

The Warriors teams with Durant, Stephen Curry, Klay Thompson and Draymond Green are considered among the greatest of all time.

They went 16-1 in the 2017 playoffs, won another championship the following season and could have three-peated in 2019 if Durant hadn't suffered a torn right Achilles tendon in Game 5 of the NBA Finals against the Toronto Raptors, followed by Thompson sustaining a torn left anterior cruciate ligament in Game 6.

But it was a whirlwind love affair for Durant and the Warriors, with extreme highs and lows. After an infatuation period, there were a few bumps toward the end that led to its undoing.

Green and Durant famously got into a heated exchange during a game against the LA Clippers in November 2018.

Six months later, after Durant was sidelined for nine games during the team's playoff run because of a calf strain, he became frustrated with a narrative that emerged about whether the team needed him to win, especially after he averaged a career-high 32.3 points that postseason. Then, after he suffered the Achilles injury in the Finals, there were questions raised about whether he returned too soon.

But all of those storylines have since been rendered meaningless, greatly overshadowed by the deep respect and brotherhood Durant and the Warriors shared.

The genuine affection between Durant and his former team was palpable Saturday.

As a trainer stretched Durant at half court before tipoff, Curry leaned down next to him, and they chatted.

During the game, a mic'd up Curry teased Durant, telling him he was going to set a great screen on him and asking how he'd get through it.

After the game, Durant patrolled the sideline, giving long, sincere hugs to the team's players, coaches and training staff.

"You cross paths with so many guys throughout the league, but when you actually team up and win championships, there's a different bond, a different feeling," Curry said. "You're still competing, so it's not lovey-dovey out there, but those memories are near and dear, for sure."

Durant gained the Warriors' deep respect during his time with the team.

After signing with them in free agency in the summer of 2016, he had to fit in. The team had been to the Finals two straight years, winning a championship in 2015 and finishing with an NBA-best record of 73-9 the following season before blowing a 3-1 series lead in the Finals against the Cleveland Cavaliers.

It worked from the get-go.

The superstar didn't have any trouble blending into the Warriors' breezy, light-hearted locker room while exemplifying the type of commitment and dedication that's expected outside of it.

Green was immediately impressed by Durant.

"What stood out to me was his work ethic," Green said.

"If you go watch someone work out, at some point you're going to be like, 'All right, that's not a game-speed move.' When you watch Kevin work out, every single move he makes is at game speed, which I think is absolutely insane. It's just so hard to do. But I think if there was something that stood out to me more than anything, it was just his work ethic and how much he loved the game of basketball."

For Warriors coach Steve Kerr, it was a joy to watch.

After practices, Durant, Curry and Thompson would go to different courts and go through individual workouts.

The three future Hall of Famers, who were all at the top of their game, would put in extra time to perfect their craft, each working as hard as he could individually so they could perfectly harmonize together.

"It was mesmerizing to watch the three of them," Kerr said. "They were all three just such hard workers, and it was like watching somebody just at the absolute pinnacle of their game, with their competence, with their work and everything just coming together because all three guys really were right in their primes when they were playing together. The work that Kevin puts in is one of the things that really defines him."

For that reason, no one in the Warriors organization was surprised that Durant has been so successful in his debut with the Nets following his year-and-a-half layoff from basketball after his Achilles injury.

Durant is averaging 29.5 points — his highest scoring output since 2013-14 ⁠— 7.4 rebounds and 5.2 assists. He's dazzling fans with the same speed, strength and agility that he had before the injury.

The Warriors have the same hope for Thompson, who suffered a torn right Achilles tendon before this season. Durant has helped guide his former teammate during his recovery, encouraging him with both his words and his example.

"Me and Klay talk pretty often, a couple of times a week," Durant said. "And it's good to see him starting to walk and getting his boot. Obviously, I know what that process is like, so I know he's chomping at the bit to get out on the court and start shooting and start form shooting and stuff. Can't wait to see him back out there."

There's a true caring there that will never go away.

Durant helped the Warriors win. And they helped him grow.

Both parties look back at their time together fondly.

For Green, one thing has always stood out to him about Durant.

Coming Of Age
Zion Williamson is having a historically dominant season and is turning the Pelicans into must-see viewing, Martin Rogers writes.
19 mins ago