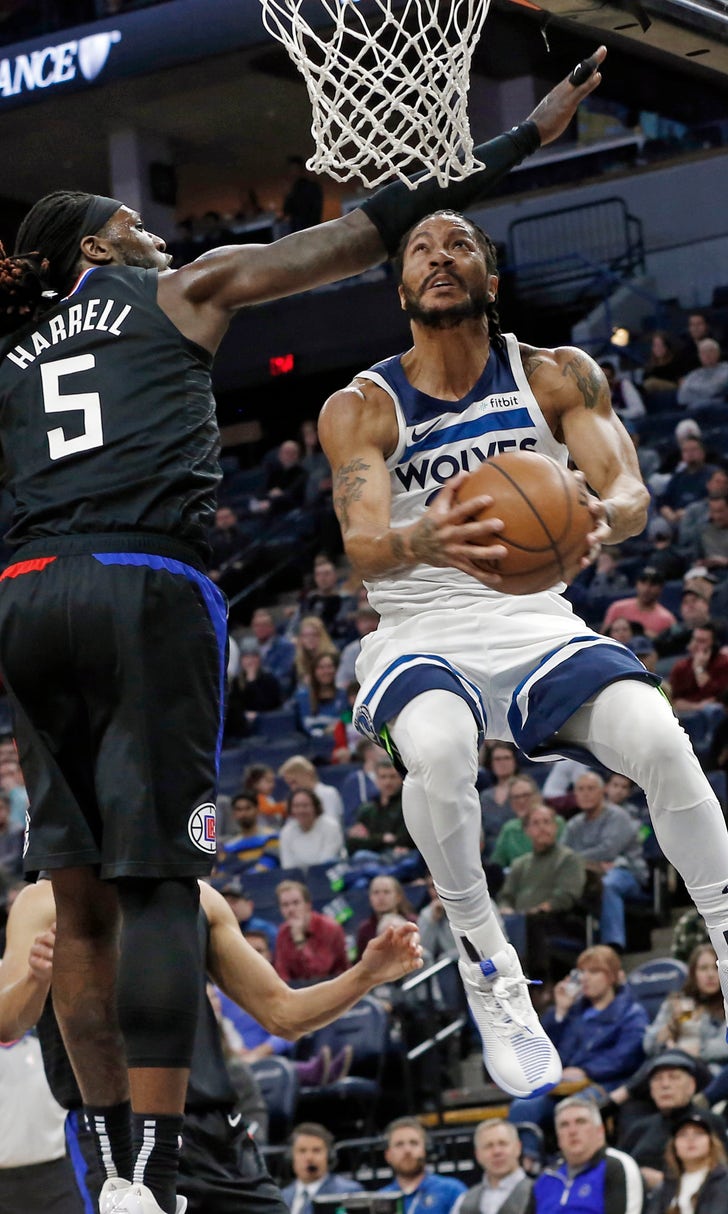 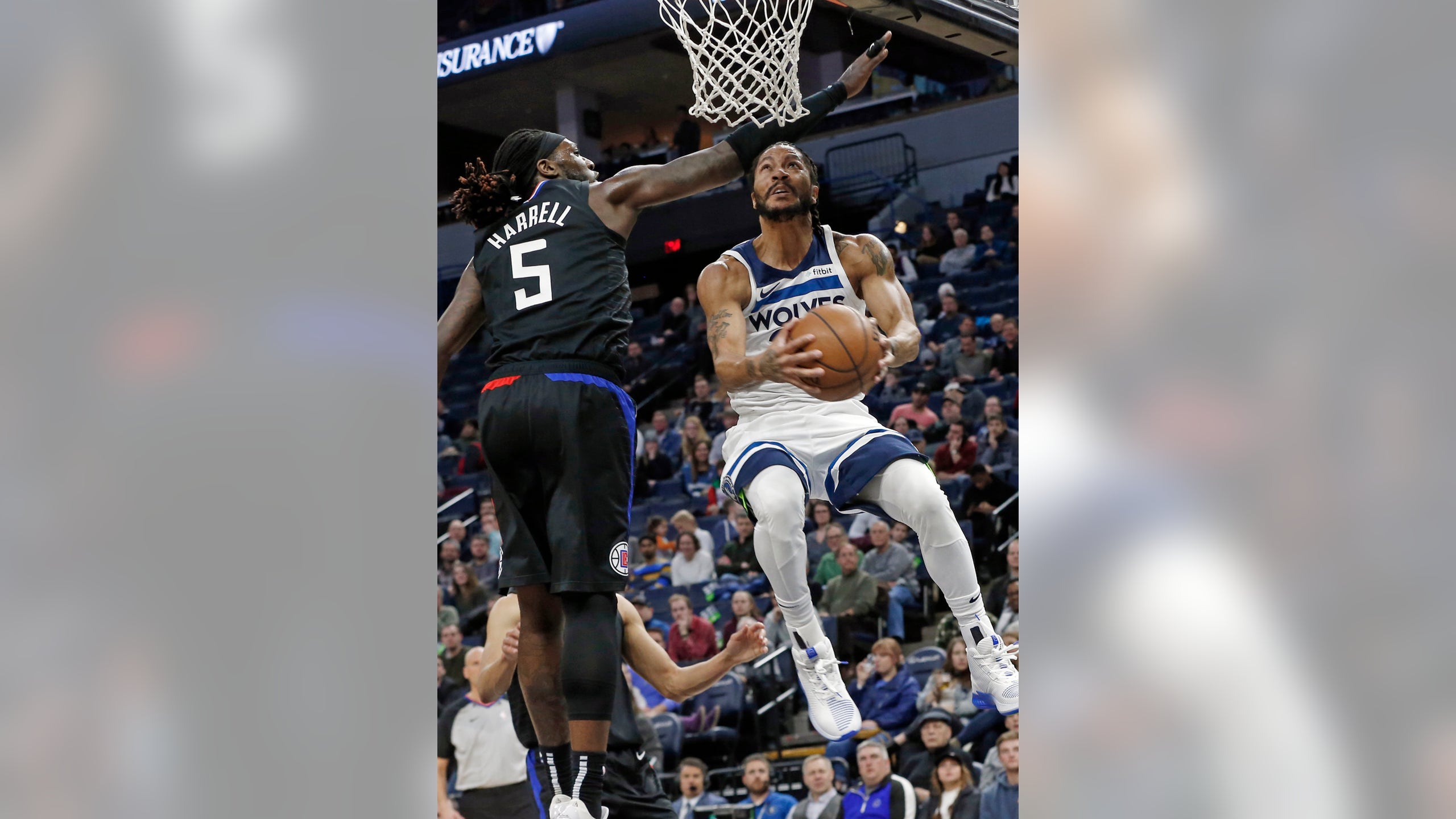 MINNEAPOLIS (AP) — Derrick Rose and Jeff Teague gave a beleaguered backcourt a needed boost and lifted the Minnesota Timberwolves to a victory.

Rose scored 22 points and Teague added 19 points and 10 assists for the Timberwolves, who played without the ill Andrew Wiggins but beat the Los Angeles Clippers 130-120 on Monday night. Rose and Teague both have missed significant time with injuries recently.

"We're veterans," Rose said. "I think we know how to gauge a game a little bit. Play us at the same time, and I think it will work out."

Karl-Anthony Towns had 24 points and 10 rebounds for Minnesota, while Dario Saric had 19 points.

Lou Williams scored a season-high 45 points off the bench for the Clippers, making a season-best 16 free throws while going perfect from the line.

"It's hard to kind of digest that when you lose a game," Williams said. "Grand scheme of things, career-wise, it's pretty cool."

Montrezl Harrell added 18 points off the bench for Los Angeles, part of an 89-point effort from the reserves. The Clippers came in leading the league in bench scoring at 51.6 points per game.

Minnesota had lost its previous four games and six of its previous seven while struggling with injuries at the point guard position. On Monday night, the Timberwolves had both Rose and Teague on the court at the same time for the first time since Jan. 20 against the Phoenix Suns.

"Obviously we're not satisfied with one win, but it's hard to win in this league," Saunders said.

The Timberwolves had played nine games without having both Teague and Rose available.

"It felt good," Rose said. "I was just trying to read the situation, take my time and be patient while I was out there."

"Two guys who can handle the ball and make plays," Teague said. "He is a tremendous player. He can get to the rack at any time. Having another guy that's special with that basketball like that makes my job so much easier."

Minnesota then scored the first 10 points of the third quarter to open up a double-figure lead. The Timberwolves would go on to lead by as many as 23 points. They held on against a Clippers team that has rallied from 20 or more points down on the road three times this month.

"We were awful defensively," Clippers coach Doc Rivers said. "The game was 48 minutes of single mistakes. We made so many mistakes."

Saunders moved Saric into the starting lineup Monday. His start came at the expense of veteran forward Taj Gibson, who willingly moved into a reserve role. Both Saunders and Saric were full of praise for Gibson, who scored 14 points off the bench while playing both power forward and center.

Clippers: The 89 bench points were the most in the NBA since the Kansas City Kings scored 90 against the Chicago Bulls on Dec. 1, 1982. . Williams scored a team-high 11 points in the first half and made only one field goal. His first nine points came from the free-throw line, where he was 9 for 9. Rivers remains close friends with former Timberwolves coach Tom Thibodeau, who was fired on Jan. 6. "We talk a lot," Rivers said. "I tried to get him today a lot to get the scouting report, but he wouldn't give it to me." ... Los Angeles is currently on a 12-day, six-game road trip that will cover 6,659 miles. It's the fifth-longest road trip in the NBA this season. ... F Wilson Chandler (right quad strain) and F Luc Mbah a Moute (sore left knee) were sidelined.

Timberwolves: Luol Deng started in Wiggins' place and scored 12 points in a team-high 37 minutes, 50 seconds. It was Deng's first start since Oct. 19, 2017, the first game of last season, when he was a member of the Lakers. That was his only appearance of the season. ... The Timberwolves were still without F Robert Covington (bone bruise in right knee) and G Tyus Jones (sprained left ankle). ... G Isaiah Canaan was signed to a second 10-day contract Sunday.

How to win $25,000 on NBA Wednesday
A possible NBA Finals preview looms, as the West's top team heads to Philadelphia to face the East's top dog.
13 hours ago

Garnett 'trying' to buy T-Wolves
The Timberwolves appear to be for sale, and a familiar face in Kevin Garnett is hopeful his group makes the purchase.
July 21, 2020
those were the latest stories
Want to see more?
View All Stories
Fox Sports™ and © 2021 Fox Media LLC and Fox Sports Interactive Media, LLC. All rights reserved. Use of this website (including any and all parts and components) constitutes your acceptance of these Terms of Use and Updated Privacy Policy. Advertising Choices. Do Not Sell my Personal Info