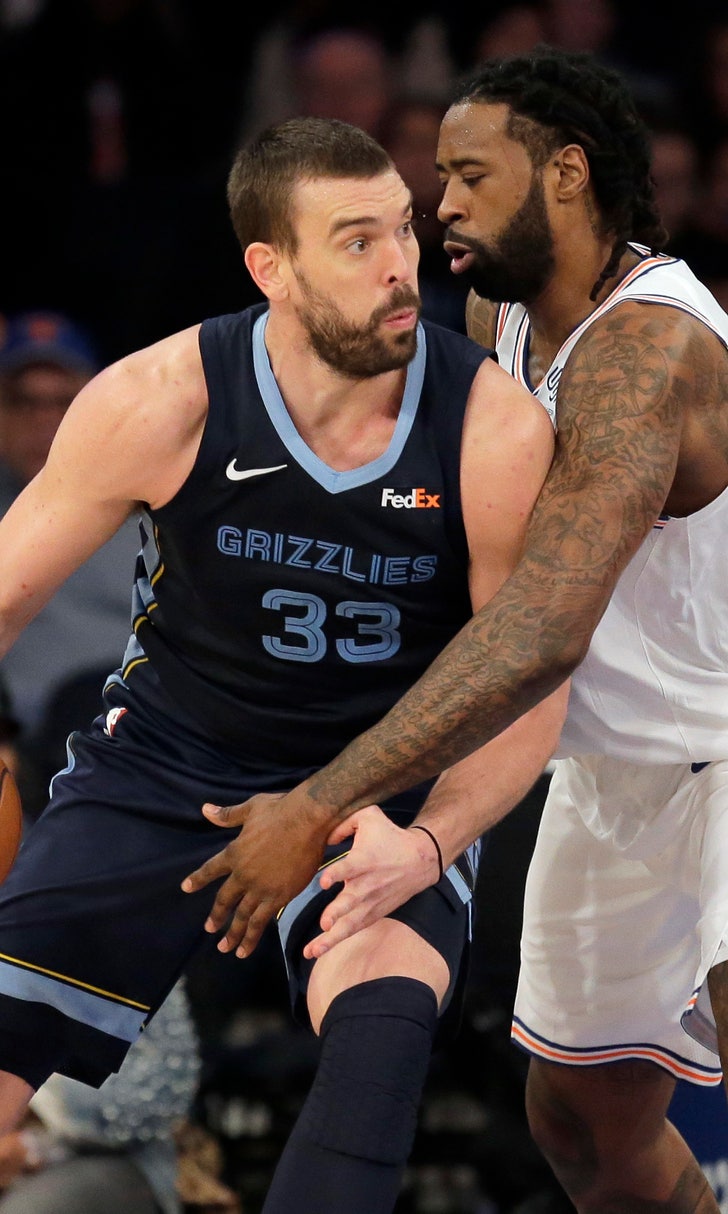 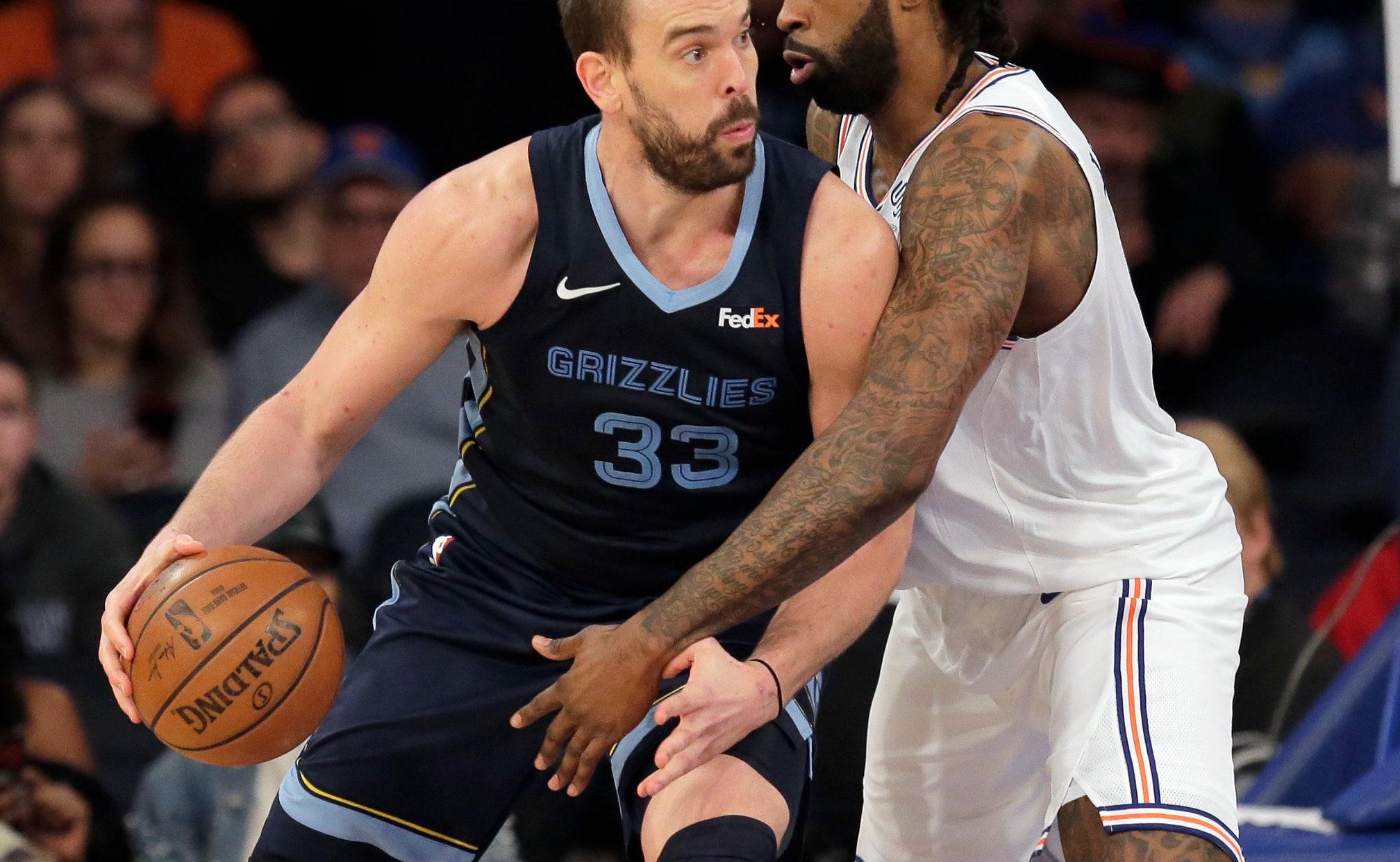 NEW YORK (AP) — Marc Gasol forgot his cellphone overnight on the Grizzlies' team bus over the weekend, giving himself some stress-free time in New York.

He and Mike Conley won't be able to hide quite so easily the next few days.

The NBA trade deadline is Thursday afternoon, and Memphis has told the franchise mainstays it is listening to offers for both . Conley acknowledges it will be an emotional week envisioning the end of an era.

"Before I would have said no, it wouldn't have been on my mind, not having been in this situation," he said. "But I'm not going to lie, it's going to creep in because you know that it's possible that one or both will be gone, and either way it'll be the last time we're playing together with him, or for the team, or whatever."

The Grizzlies have fallen out of the playoff race, but teams who are in it might be interested in adding one of the respected veterans. During games or at home with the family, Gasol said it's easy to ignore the trade chatter. But the Grizzlies have been on the road, with plenty of time alone in hotel rooms where the mind tends to wander.

"So yeah, it is a little weird, but it's coming to an end one way or another," Gasol said.

Conley is eager for that.

"You look forward to that deadline passing," Conley said. "Either way it goes, you just want to get clarity and understand your situation going forward, and you try to block it out but it's hard. Everybody who texts you or talks to you in person mentions something about it, so it's hard to run from it. But you just hope for the week to get through real quick and get back to business, whether it's here or anywhere else."

Dirk Nowitzki might have one of the busiest schedules at All-Star weekend.

He's an honorary coach of the World team at the Rising Stars Challenge. The next night, he'll take part in the 3-point contest. Finally, he'll play in the All-Star Game after he and Dwyane Wade were selected by Commissioner Adam Silver as special roster additions.

It's a pretty full workload for anyone.

Imagine what it takes to handle an NBA season at age 40.

"If anybody knew the amount of work that he's put in to get to a point where he can come out on the floor and help our team and still shoot the ball the way he shoots it and scramble around and defend, they'd be absolutely amazed," Dallas coach Rick Carlisle said.

Nowitzki missed the start of his record-tying 21st season after a lengthy recovery from left ankle surgery last April. He hoped to be ready in time for training camp but tendon soreness forced him to continue rehabbing and cost him the first 26 games.

That's made it hard even for the NBA's No. 7 career scorer to find a rhythm. He reached double digits only twice in his first 20 games.

"It hasn't been a smooth season for me with sitting out right during training camp for about eight weeks and then battling an uphill battle to try to come back at 40 in the middle of the season, so it's been frustrating at times," Nowitzki said. "I'm sure the guys saw that at times where I wasn't happy and I was still trying to push through, and I'm going to do my work on off days so I can at least play at a decent level and still hopefully enjoy the rest of the season a little more than I did the first, whatever, 20 games."

Nowitzki scored a season-high 14 points last Wednesday at New York, where he was treated to warm ovations from fans in what could be his final season. Carlisle seemed moved as he talked about a player he said fans view as one of their own.

"It's a respect thing and it's one of the reasons that I'm taking in every moment of this, and I do see the amount of work that he puts in to get on the floor and help," Carlisle said. "I can't begin to tell you all the things that he's had to do, but he's been slugging it out and it's just been great to see."

THINGS TO WATCH THIS WEEK:

Thursday: All-Star draft. LeBron James has the first pick as he and fellow captain Giannis Antetokounmpo draft their rosters on TNT.

Thursday: Lakers at Celtics. Will both teams have their rosters intact after the deadline?

Friday: Nuggets at 76ers. Nikola Jokic against Joel Embiid in an All-Star matchup of men in the middle.

Karl-Anthony Towns is not only a two-time All-Star, but about to be a two-time movie star.

The latter comes on the same day.

The Minnesota Timberwolves forward/center is in a pair of films that debut Friday. He plays himself in "What Men Want," in which Taraji P. Henson stars as an NBA agent trying to land the No. 1 pick, who in one scene gets to have a conversation with Towns, one of his heroes.

Towns treated staff from the Timberwolves and the WNBA's Lynx to a screening of the film last week.

Also Friday, "High Flying Bird" will begin being streamed on Netflix. Directed by Academy Award winner Steven Soderbergh, it's a fictional tale of an agent managing a rookie client during a lockout and features interviews with Towns, plus Donovan Mitchell and Reggie Jackson, discussing their real-life early NBA experiences.