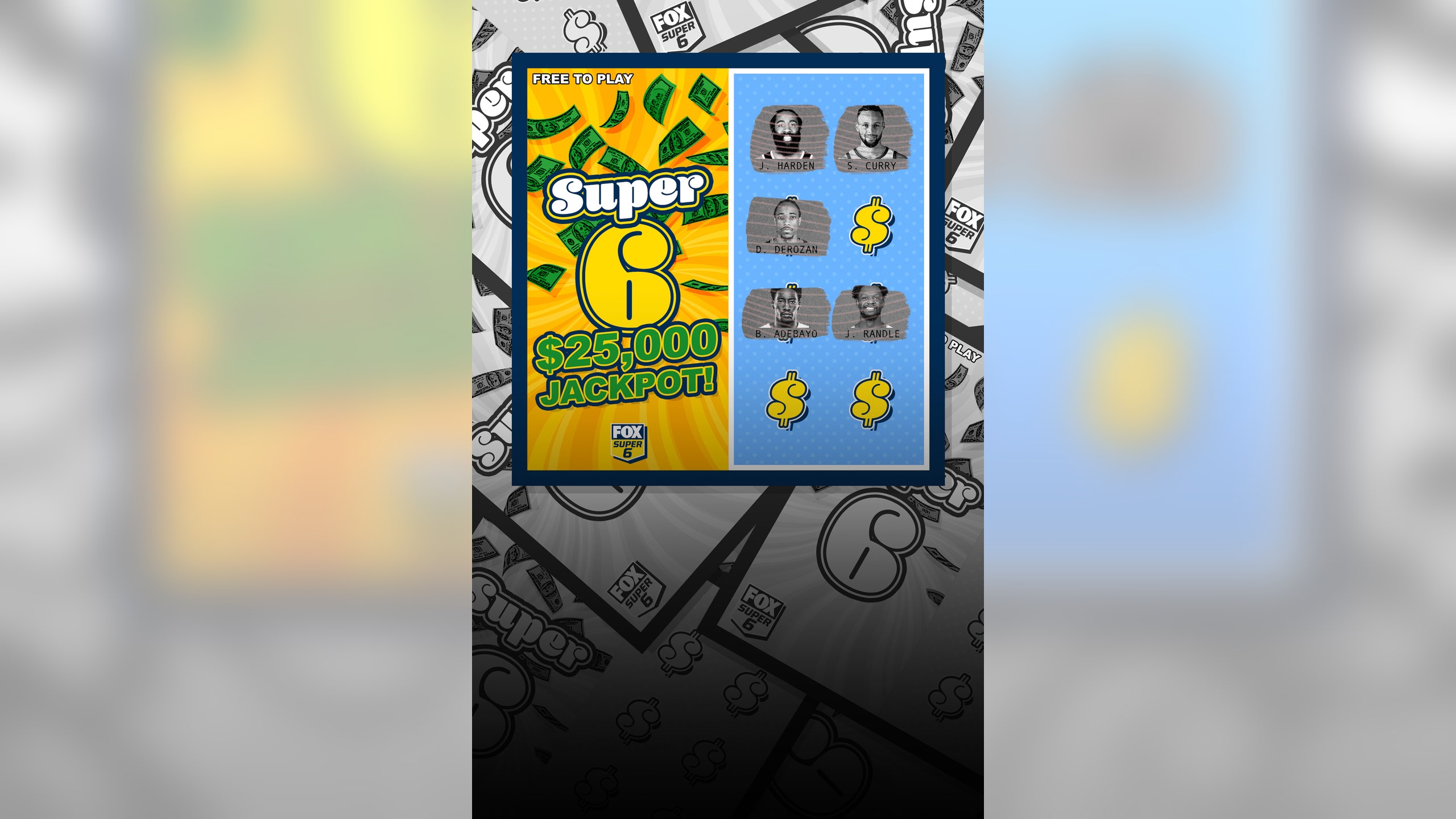 With football now in the rearview mirror and baseball more than a week away from pitchers and catchers reporting for spring training, the NBA has the undivided attention of most sports fans on a nightly basis.

After a delayed start, the 2020-21 season is through seven weeks, with contenders old (Los Angeles Lakers, LA Clippers) and new (Philadelphia 76ers, Brooklyn Nets) emerging as the centerpieces of what promises to be an exciting run to the playoffs.

Knowing that, now is a great time to get familiar with all things in the association by playing FOX Bet’s Super 6 on the NBA on Tuesday. You could win $25,000, and best of all, it’s free.

Just download the Super 6 app on your mobile device, pick the winners of all six games with the correct margin of victory, and you can win the jackpot!

The Nets will be without Kevin Durant, who is in quarantine until Friday, per the NBA's COVID-19 protocols, and Kyrie Irving has been day-to-day because of a finger injury that kept him out of Brooklyn’s 124-108 loss to Philadelphia. Brooklyn is hoping that Irving will be back for Tuesday. Since trading for James Harden, the Nets are 7-4 but just 2-3 on the road. Detroit has lost four straight games and continues to struggle on the defensive end of the floor, allowing opponents to shoot 47% the past 10 games.

As the season approaches its halfway point, these two teams are in the hunt for the final playoff spots in the East. That makes this game a swing game and all the more valuable in the postseason chase. The Knicks have been led by Julius Randle, who has been averaging 22.7 points and six assists per game. The Heat have won three of their past five while trying to dig out of an early hole that had the defending Eastern Conference champions reeling following a COVID-19 protocol stretch. Bam Adebayo leads the Heat with 20.9 points per game.

These teams are currently on the outside looking in at the Western Conference playoffs. Houston is without leading scorer Christian Wood, who is out because of a right ankle sprain. The Pelicans' Zion Williamson played well in a game against the Rockets earlier this season, recording 26 points, seven rebounds and four assists on Jan. 30.

Tuesday's clash marks the second game of a back-to-back between the two teams in Texas and the third meeting between the sides since Jan. 20. The Warriors are being carried by Steph Curry, who is averaging 29.5 points per game and threw in 57 on Saturday in a 134-132 loss at the Dallas Mavericks. He followed that performance up with a 32-point outing in Monday's 105-100 loss in San Antonio. The Spurs crept back to .500 at home (7-7) with Monday's win, as DeMar DeRozan has kept them in the middle of the tight Western Conference playoff race. Dejounte Murray stole the show, quite literally, with 27 points, 10 rebounds and a career-high eight steals for the Spurs.

Joel Embiid & Co. head west to begin a four-game swing as the leaders in the Eastern Conference, with the big center getting serious MVP consideration with his per-game averages of 29.3 points and 10.7 rebounds. Meanwhile, De’Aaron Fox and the Kings have won four straight, with the past three coming against the Boston Celtics, Denver Nuggets and Clippers on the road Sunday. Fox is averaging 23.0 points per game and shooting 48% from the floor.

The Celtics end their five-game western swing in Salt Lake City after splitting the first four games. Jayson Tatum has averaged 27.8 points per game during the swing. This task is a tough one because the Jazz are on fire ⁠— winning 15 of their past 16 games. Donovan Mitchell scored 27 points while adding 11 assists and nine rebounds in a 103-95 win over the Indiana Pacers to close out a 3-0 road swing through the East. On the injury front, Mike Conley is questionable for Utah because of a hamstring ailment.