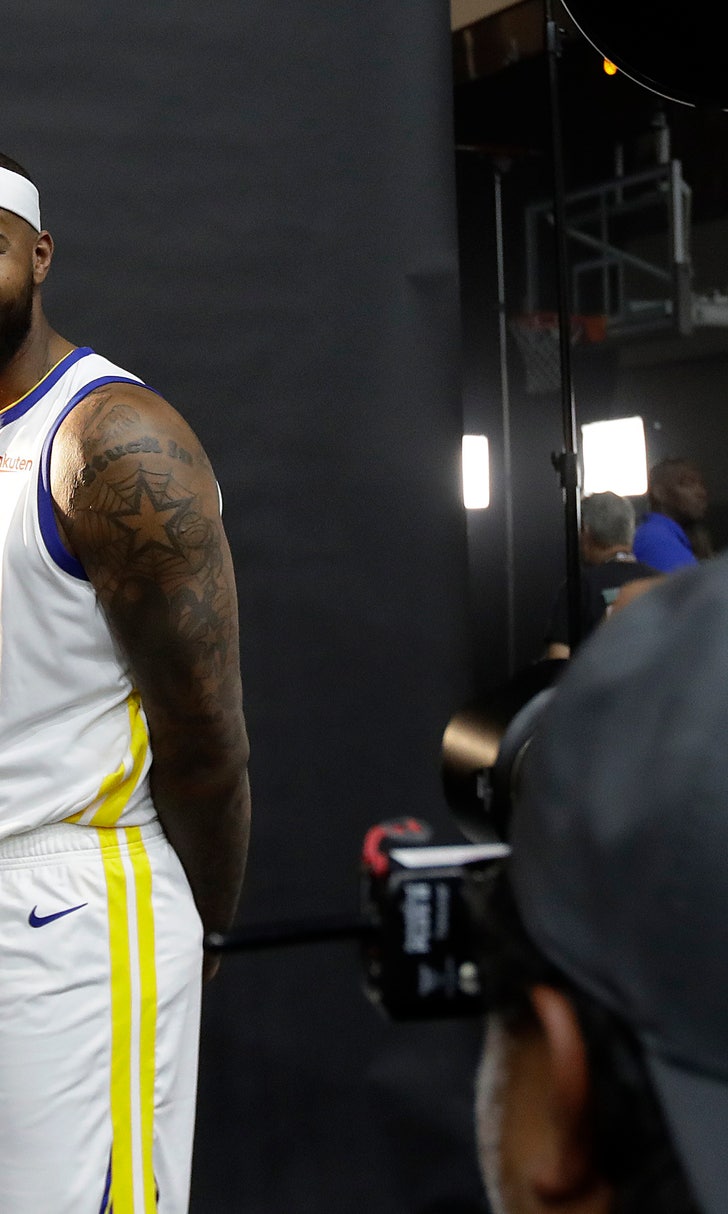 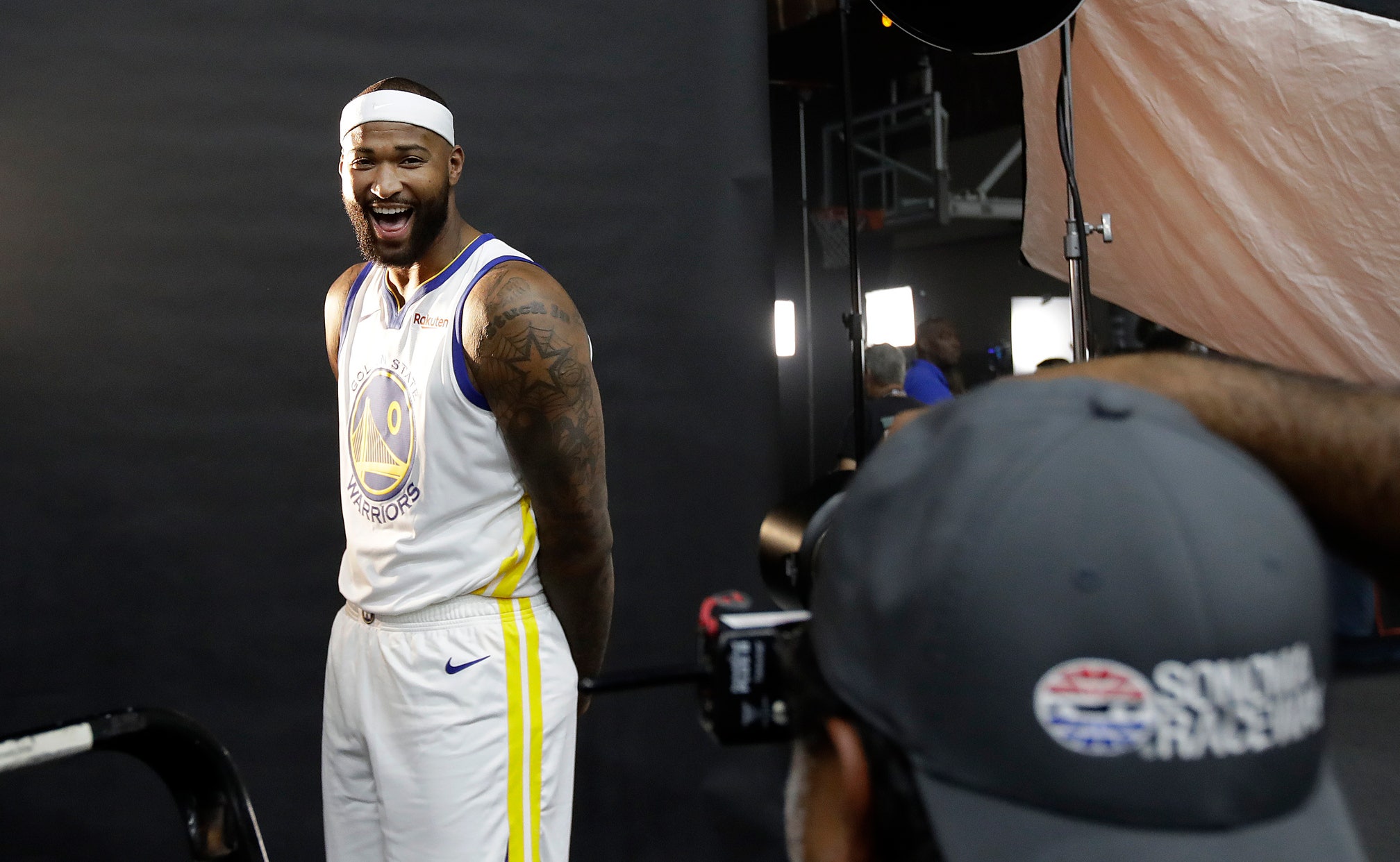 previous story
Dan Mullen expects ‘lot of passion’ in return to Miss State
next story
With new coach and new arena, Giannis, Bucks are all smiles

DeMarcus Cousins back on the court for noncontact work

OAKLAND, Calif. (AP) — DeMarcus Cousins has progressed in his recovery from surgery for a torn left Achilles tendon and is doing light shooting and other skill work on the court and will be able to do some noncontact work as the Warriors' training camp begins.

Golden State general manager Bob Myers said anyone who thinks the two-time defending champions plan to "save DeMarcus for the playoffs, I think that's inaccurate, when he can play he'll play."

That doesn't mean Cousins will be pushed to return too soon. He was re-examined last week by Dr. Richard Ferkel, the surgeon who performed his procedure, and all was positive. Myers said Cousins would be evaluated again in four weeks.

"We won't rush him but we also won't hold him back," Myers said at Monday's media day.

Cousins injured his Achilles in late January and it prematurely ended his season with the Pelicans. Before the injury, Cousins averaged 25.2 points, 12.9 rebounds and 5.4 assists in 48 games.

He said he's encouraged to be running full-court, playing 1-on-1 and 2-on-2 — and Cousins said he will be a new player when he returns, "I'm seriously like a mad man right now."

"It's been hard. I would be lying if I told you anything different. It's been an absolute grind," Cousins said of his recovery. "It's taken a lot of dedication, a lot of commitment. ... It's probably one of the hardest things physically and mentally I've been through in my career so far."

When Boogie is back, Golden State will have five 2018 All-Stars in coach Steve Kerr's starting lineup.

"Then you get to see DeMarcus Cousins, once he's healthy. How does he fit into the team? And how does the team grow as a whole?" Kerr said. "I think it will be fun as a coach and for fans. And by the end of the season we'll be clicking and ready to roll in the playoffs."

Jordan Bell would like to see the fiery Cousins, Kevin Durant and Draymond Green get into it. Bell figures a little healthy scrapping on the practice floor might be good fuel for Golden State as it goes for a third straight title after winning three of the past four championships.

"I hope they fight this year, I would love ... I just want to see the fades go up, that's all I want to see is KD and him catching a friendly one, him and Draymond catching one," Bell said. "Everybody just catch a friendly one, I want to record it. Just to make sure everybody's good, no hostility. I don't know when, I just hope it happens. I'm very excited about that. I'm going to be right there in front commentating, egging, gas 'em, do all that."

Green would much prefer that Bell take on Boogie.

"He's a young guy. He should be the one wanting to fight," Green said. "I'm getting old, so he can have that."

According to the Elias Sports Bureau, the Warriors would be the first team since Boston in 1975-76 to play five All-Stars from the previous season at the same time. That group was Jo Jo White, Charlie Scott, Dave Cowens, Paul Silas and John Havlicek.

The 28-year-old Cousins' imposing presence will mean so much.

"Obviously DeMarcus is one of the most talented players in our league. Most people see, 'Oh, man, DeMarcus went to the Warriors, they won,' and it ain't that easy," Green said. "Like that's 26 points a game you're working into the lineup. It's tough. But that's the fun part. The fun part is making it work. I think back to when KD came here, everybody, 'Oh, man, they've got Kevin Durant, they won 73 games, it's over.' And honestly the fun part wasn't winning the championship. The fun part was during the year figuring that out, how we was going to make that work. And I'm looking forward to the same thing with DeMarcus."

NOTES: Warriors coaching and front office promotions include adding Kerr's son, Nick, to the video staff after he spent last season with the Spurs. Bruce Fraser — Stephen Curry's regular shooting guru — is now an assistant coach and Chris DeMarco is an assistant coach and director of player development. "He's a catalyst with who we are as a team and our identity," Curry said of Fraser. "He does way more than quote-un-quote coach." ... Golden State signed free agent G Tyler Ulis. ... Myers said there have been talks with G Patrick McCaw's representatives and "conversations have been cordial," the GM said. "We're going to keep talking and hopefully we'll reach a resolution that works for him and us."

The Lakers Are Owning The NBA Offseason
The Lakers didn’t wait until Black Friday to get their hands on some of the juiciest bargains of the year, Martin Rogers writes.
19 hours ago

Tinseltown Tussle
The rivalry between the Lakers and Clippers has spilled into the offseason. Who's winning this Hollywood fracas so far?
2 days ago
those were the latest stories
Want to see more?
View All Stories
Fox Sports™ and © 2020 Fox Media LLC and Fox Sports Interactive Media, LLC. All rights reserved. Use of this website (including any and all parts and components) constitutes your acceptance of these Terms of Use and Updated Privacy Policy. Advertising Choices. Do Not Sell my Personal Info