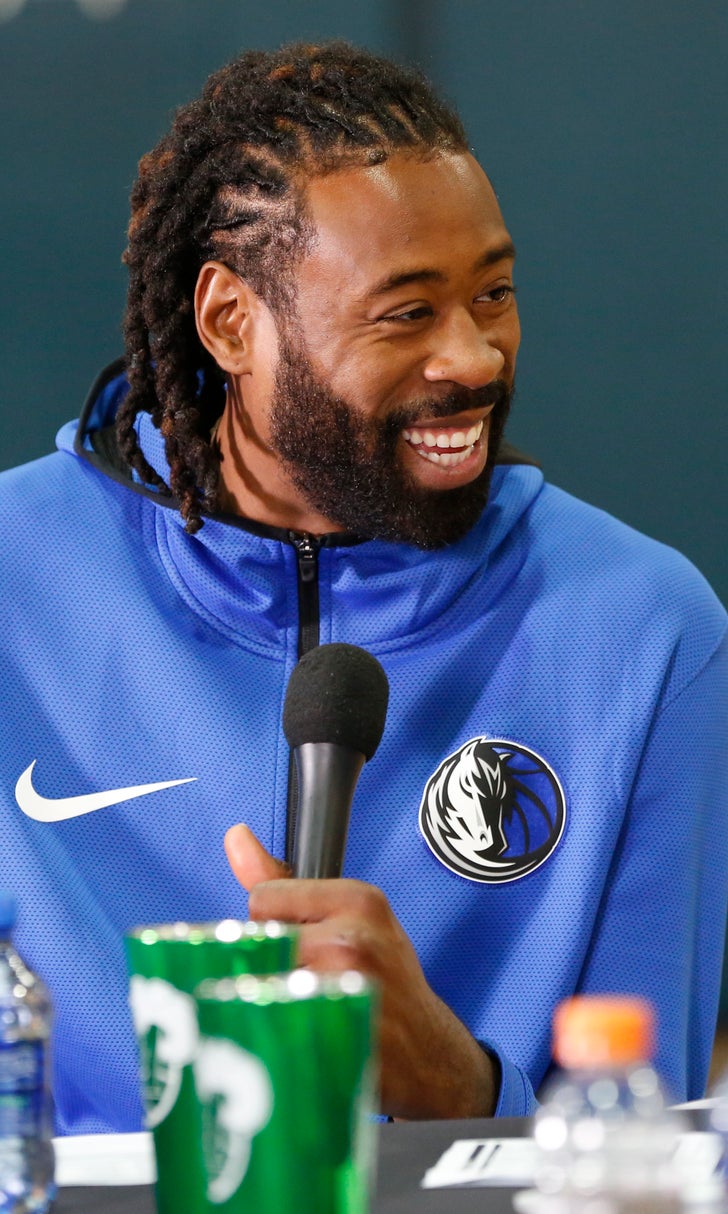 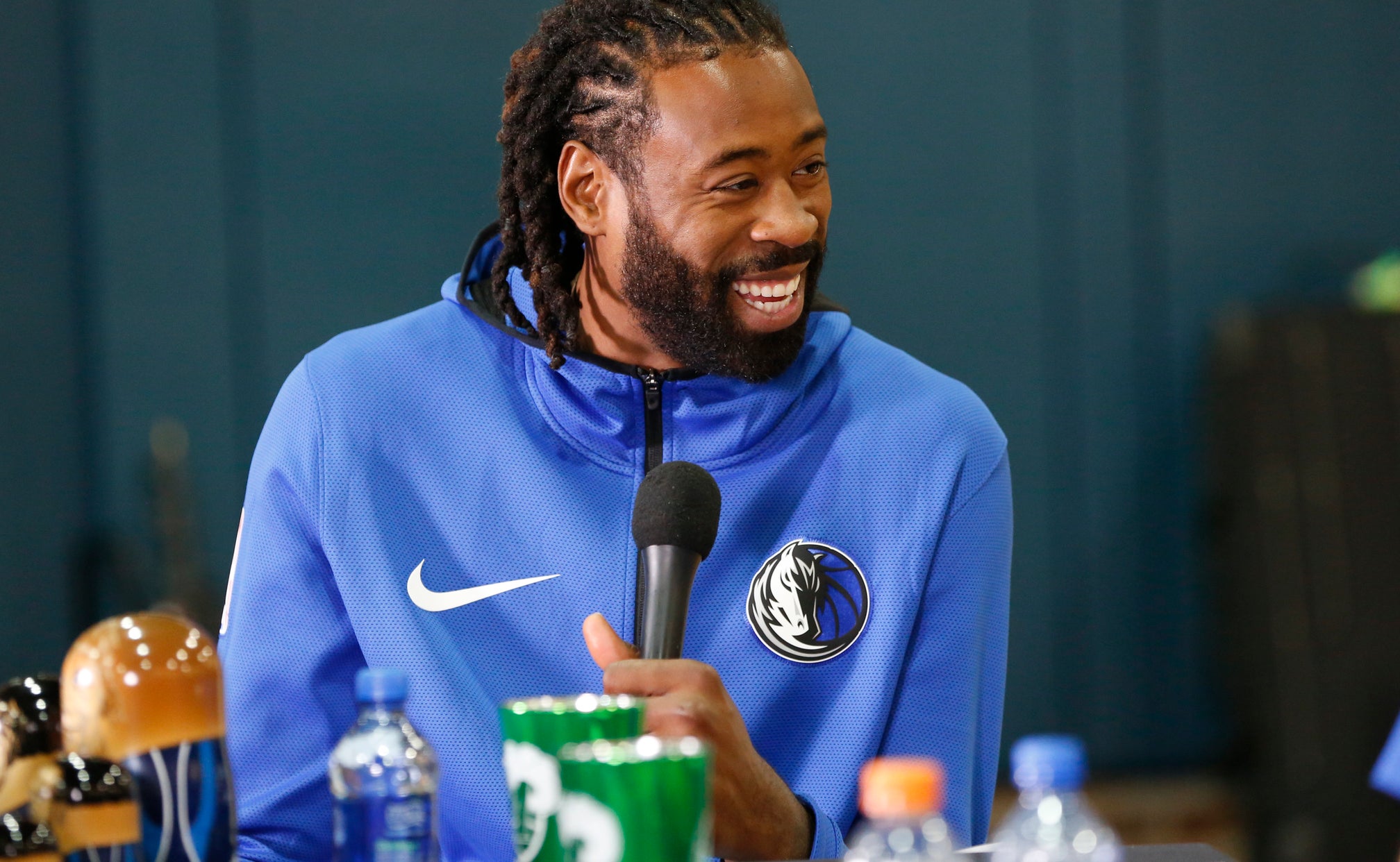 DALLAS (AP) — DeAndre Jordan took off his warmup jacket, tossed it aside and declared that his decision to join the Dallas Mavericks didn't mean he also would be playing for his favorite NFL team, the Dallas Cowboys.

Humor was the center's way of easing into all the questions about his infamous jilting of the Mavericks in free agency three years ago, when he agreed to play for Dallas and changed his mind before contracts could be signed.

When it was pointed out to him that folks in Dallas hadn't seen the fun-loving side of the native Texan before Mavericks media day Friday, Jordan did what he had done for most of his 15 minutes with reporters. He smiled.

"You haven't seen this side?" Jordan asked, repeating the observation. "You guys hated me the past three years so I probably wasn't very open in interviews. You know what I mean? I'm excited to get to know all of you guys."

Jordan wanted to get one thing straight before agreeing again to sign with the Mavericks, this time after opting out of the final year of that four-year contract he signed with the Los Angeles Clippers in the summer of 2015. He wanted to make sure coach Rick Carlisle and Dirk Nowitzki, among others, didn't have any hard feelings.

Well, Jordan was pretty sure he was cool with the 40-year-old German superstar who is about to set an NBA record by spending all 21 of his seasons with the same franchise.

"Dirk is an old man so he forgets a lot of stuff," Jordan said, sending a wave of laughter through the interview room. "Like I said at the beginning, before I committed again I just wanted to make sure that we were OK and everything was positive. They said they forgot about all that and they were looking forward to the future."

It wasn't necessarily forget for Nowitzki, who started at center the past couple of years and likely won't have a regular spot in the starting lineup for the first time since his rookie season of 1998-99. But it was definitely forgive — long before Jordan actually followed follow through on his plan to be Nowitzki's teammate.

"We've been over that a long, long time ago," Nowitzki said. "It wasn't only about basketball. He made some other decisions about what was best for him. We're in no position to judge anybody. Everybody in a free agent situation has to make a decision that's best for himself first. And that's what he did."

Besides, Nowitzki gets to see that other side of Jordan now, too.

"He's got a crazy personality," Nowitzki said. "He's fun to be around. He enjoys life and he'll be a great addition to our team. That's off the court. I think on the court he's going to be pretty great, some of the defensive stuff he's going to wipe out."

Jordan is one of the NBA's best rebounders, finishing in the top three each of the past five seasons. Although his shot-blocking numbers have dropped off the past two seasons, the 30-year-old is still considered one of the best rim protectors.

Those are a couple of reasons Carlisle didn't even have to forgive the 6-foot-11 Jordan when the exploratory phone call came.

"I said, 'Hey, I've been waiting for this phone call for three years. You kidding me?'" Carlisle said. "And so we're thrilled to have him here. Our guys love him. And he's going to be a big asset for us."

Harrison Barnes was a defending NBA champion with Golden State when Jordan jilted the Mavericks. But the team's leading scorer the past two seasons still got caught up in the story a year later through a photo that was tweeted when Barnes signed the Mavericks immediately after the moratorium ended.

In it, Barnes is handcuffed to president of basketball operations Donnie Nelson, standing alongside Carlisle and Nelson's top assistant, former player Michael Finley. All four of them are smiling, and yes, Barnes played along.

It was a final nod to the emoji-driven drama that included Blake Griffin and Clippers coach Doc Rivers holing up with Jordan in his Houston home while Mavericks owner Mark Cuban tried to contact the former Texas A&M standout. Griffin and Rivers didn't leave until Jordan had signed.

"I never thought all of us would be on the same team this many years later," Barnes said. "I was like, 'That is nuts.' It was crazy, but everything happens for a reason."

The Mavericks have been telling themselves that a lot, through their first consecutive losing records in nearly 20 years after yet another first-round playoff exit the season after Jordan stayed in LA.

Dallas hasn't won a postseason series since winning its only championship in 2011. But with Jordan joining a pair of top-10 draft picks in Dennis Smith Jr. and rookie Luka Doncic, the Mavericks believe the franchise's fortunes may finally be turning.

Jordan is hopeful fans who booed him incessantly all five times he came to Dallas after the decision will come around as well.