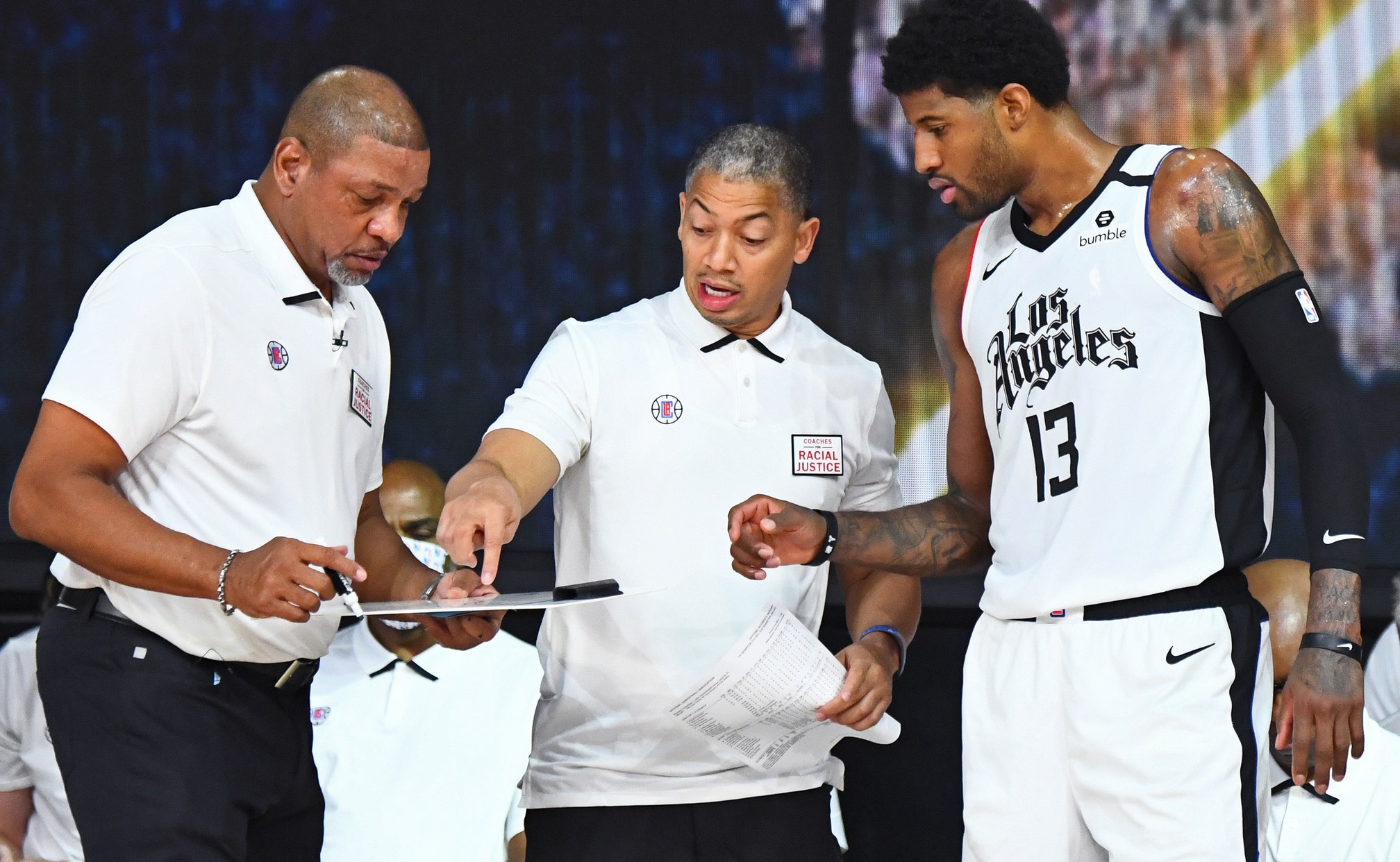 The fix is in – and the Los Angeles Clippers are hoping its a quick one.

On Thursday, the Clippers promoted assitant coach Ty Lue to head coach. He signed a five-year deal to replace Doc Rivers, who served in the position for the past seven seasons.

Even though Rivers has more head coaching experience than Lue – Doc has spent 21 years as an NBA head coach as opposed to about two and a half seasons for Lue – both men have a championship pedigree.

Rivers led the Boston Celtics to a championship in 2007-08, and Lue led the Cleveland Cavaliers to the promised land in 2015-16.

Clearly, LA is hoping that Lue's playoff coaching experience – he and the Cavaliers made three consecutive NBA Finals appearances from 2016-2018 – can push them over the edge into serious title contention, but the Clippers are also banking on Lue's ability to manage superstars, like he was able to do with LeBron James, Kyrie Irving and Kevin Love for multiple years in Cleveland.

And apparently, that part of Lue's resume will be just as important as his winning history, given a report from The Athletic on Wednesday, detailing Clippers' players struggles with the superstar treatment of Kawhi Leonard and Paul George this past season.

According to Jovan Buha and Joe Vardon, Leonard's flexibility when it came to practices and games irked teammates throughout the season.

"Players like [Patrick] Beverley, Montrezl Harrell and Lou Williams — Clippers bedrocks before the arrival of Leonard and George — bristled when Leonard was permitted to take games off to manage his body and to live in San Diego, which often led to him being late for team flights, league sources said. The team also allowed Leonard to dictate to Rivers when he could be pulled from games, among other things."

The report reveals that both Leonard and George were consulted by the Clippers front office before hiring Lue, and both gave Lue their support, which could be saying a lot considering it's well-known that Lue held James, Irving and Love to account in Cleveland, which is outlined in The Athletic piece as well.

"Upon Lue’s promotion, the first thing he did was to demand that the Cavs’ supporting stars — in this case, Kyrie Irving and Kevin Love — sacrifice their individual brands and defer to LeBron. Lue also stripped LeBron of some of the power he’d stolen from [previous coach David] Blatt inside the Cavs’ locker room, and demanded the league’s best player get in better shape, which got the attention of the entire team."

Yes, Lue famously stood up to LeBron on multiple occasions, such as this night in Portland years ago:

So, will Lue's track-record approach rectify the Clippers' struggles, in-game and in the locker room?

ESPN's Stephen A. Smith says yes – for the Clippers' sake, it better.

"You gotta get in [Leonard and George's] face, and you gotta remind them who the hell they're supposed to be as opposed to focusing on who they are ... Ty Lue is a new voice. Ty Lue does not play. Ty Lue is the person that will tell LeBron to shut the hell up."

Although Shannon Sharpe agrees with the thinking that Lue has the ability to command Kawhi's attention, in order for the Clippers to have success, Leonard will have to be onboard with the franchise's previous gritty approach.

"The culture had been established. This is what we do: we play hard, we practice hard, we give it our all ... That's something Ty Lue is gonna have to address. Ty Lue is capable of addressing it ... In Cleveland, he told [LeBron], in no uncertain terms, 'I got this.' ... He's gonna have to have that conversation with Kawhi."

And while Skip Bayless isn't sure if Lue can completely rectify the Clippers' concerns, he does believe that there's no better option to give it a go.

The Clippers will enter next season off the back of not only an embarrassing defeat in the Western Conference semifinals at the hands of the Denver Nuggets, but will also remain LA's second favorite team to an even larger degree, considering the Lakers won their 17th championship just last week.

Now, it will be up to Ty Lue to turn this ship around – and make Magic Johnson and the rest of Laker Nation choke on their words.