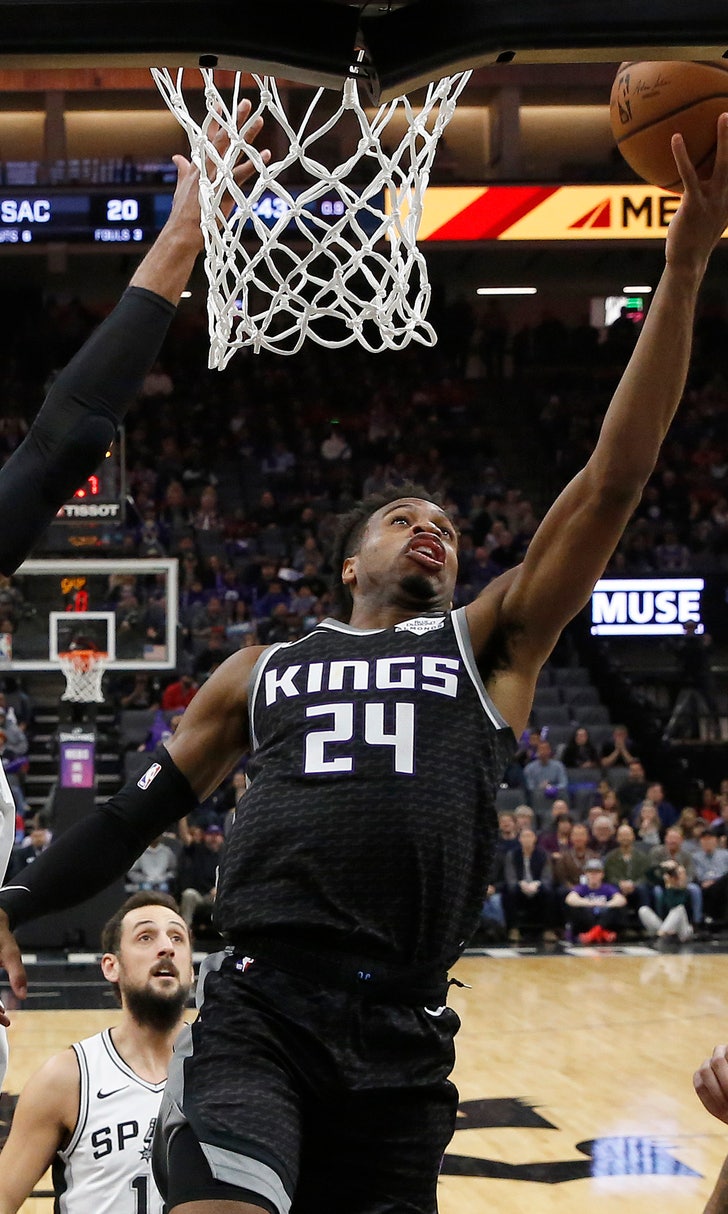 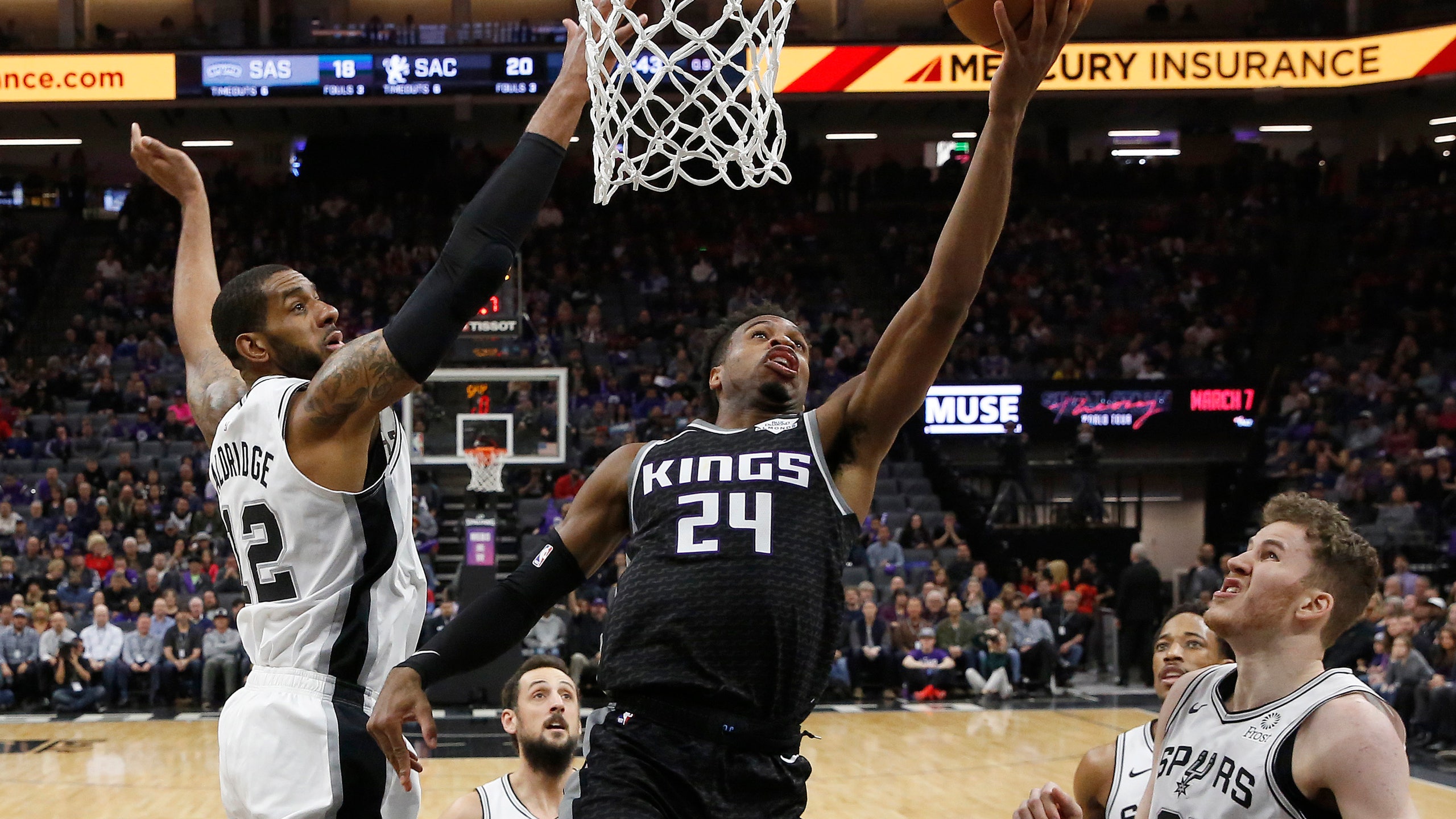 SACRAMENTO, Calif. (AP) — Marvin Bagley III signaled for the ball, caught a lob from Yogi Ferrell and nearly did a full 360-degree turn in the air before dunking it. It was just the latest highlight during an impressive run for Sacramento's emerging rookie star.

Bagley's alley-oop slam was his biggest play on a night when he had a career-high 24 points and 12 rebounds, leading the Kings past the San Antonio Spurs 127-112 on Monday for their seventh straight home win.

"I didn't know what was going to happen," Bagley said of his fourth-quarter dunk. "We were running. He threw it up. Then I jumped, I was thinking about dunking it backwards. I caught it and I turned. It was just one of those things that when it happened in the moment I wasn't really thinking about what I was going to do. I just went up and it happened."

Bagley has posted double-doubles in three straight games and is finding his groove after returning from a knee injury last month. He is showing why the Kings thought highly enough of him to draft him second overall out of Duke last year.

"It's been fun, man," he said. "I'm a totally different person from Game 1. I just feel different. I'm seeing a lot of things differently out there. The game is slowing down."

De'Aaron Fox added 20 points and Buddy Hield scored 18 to extend Sacramento's longest home winning streak since a 14-gamer in 2005-06. That was the last time the Kings made the playoffs, but Sacramento (28-25) is positioned to make a run at a postseason spot this season. The Kings trail the Los Angeles Clippers by a half-game for eighth place in the Western Conference.

DeMar DeRozan had 24 points and LaMarcus Aldridge added 22 for the Spurs, who lost the opener of their annual eight-game rodeo road trip.

Sacramento coach Dave Joerger was fearful his team could have a "hangover" after an emotional win at home Saturday night against Philadelphia. But the young Kings responded with another victory, helping them seal their first season-series win over the Spurs since 2001-02.

Sacramento had lost 14 straight to San Antonio before winning at home in November and followed it up with another. The teams meet for the final time in the regular season March 31 in San Antonio.

The Kings started to pull ahead midway through the third quarter. Hield made a driving layup followed by a 3-pointer in transition to build the lead to 91-80, and Sacramento led by 12 heading into the fourth.

The Spurs cut the deficit in half early in the fourth but Bagley energized the crowd with an alley-oop dunk when he rotated nearly 360 degrees after catching the lob from Ferrell to help stave off a comeback attempt.

The Kings made seven 3-pointers and had 20 fast-break points in the first quarter to take a 14-point lead before the Spurs fought back in the second to briefly go back ahead. Fox's buzzer-beating layup put Sacramento up 63-59 at halftime.

"They got the crowd involved, got into transition, and they didn't slow down after that," DeRozan said. "We just missed a lot of easy shots and didn't have a rhythm all game. And you can tell their comfort level was all the way on the 10. They had it going and we didn't."

Spurs: G Derrick White didn't join the team for the start of the road trip because of a heel injury. "He'll be out for a while," coach Gregg Popovich said. "The MRI wasn't great. So we'll see." Davis Bertans started in place of White.

Kings: Sacramento made 10 3-pointers in the first half to extend the franchise record for most games in a season with double-digit 3s. The Kings have done it 41 times this season, seven more than the previous mark set two years ago. ... The Kings outscored the Spurs 60-32 from the bench.

Ferrell scored 19 points on 7-for-7 shooting, including four from long range. That performance earned him a long run in the fourth quarter and chants from the crowd.

"That felt pretty good," he said. "I thank them for that. It's pretty cool to have the whole arena chant your name."

There was a frantic end to the third quarter. Patty Mills missed a shot for San Antonio that Nemanja Bjelica rebounded with 4.1 seconds left. He got the ball to Fox, who went coast-to-coast for a layup with 1.4 seconds to go. But Bertans then threw an outlet pass to Mills, who responded with a layup of his own with 0.2 seconds left in the quarter.