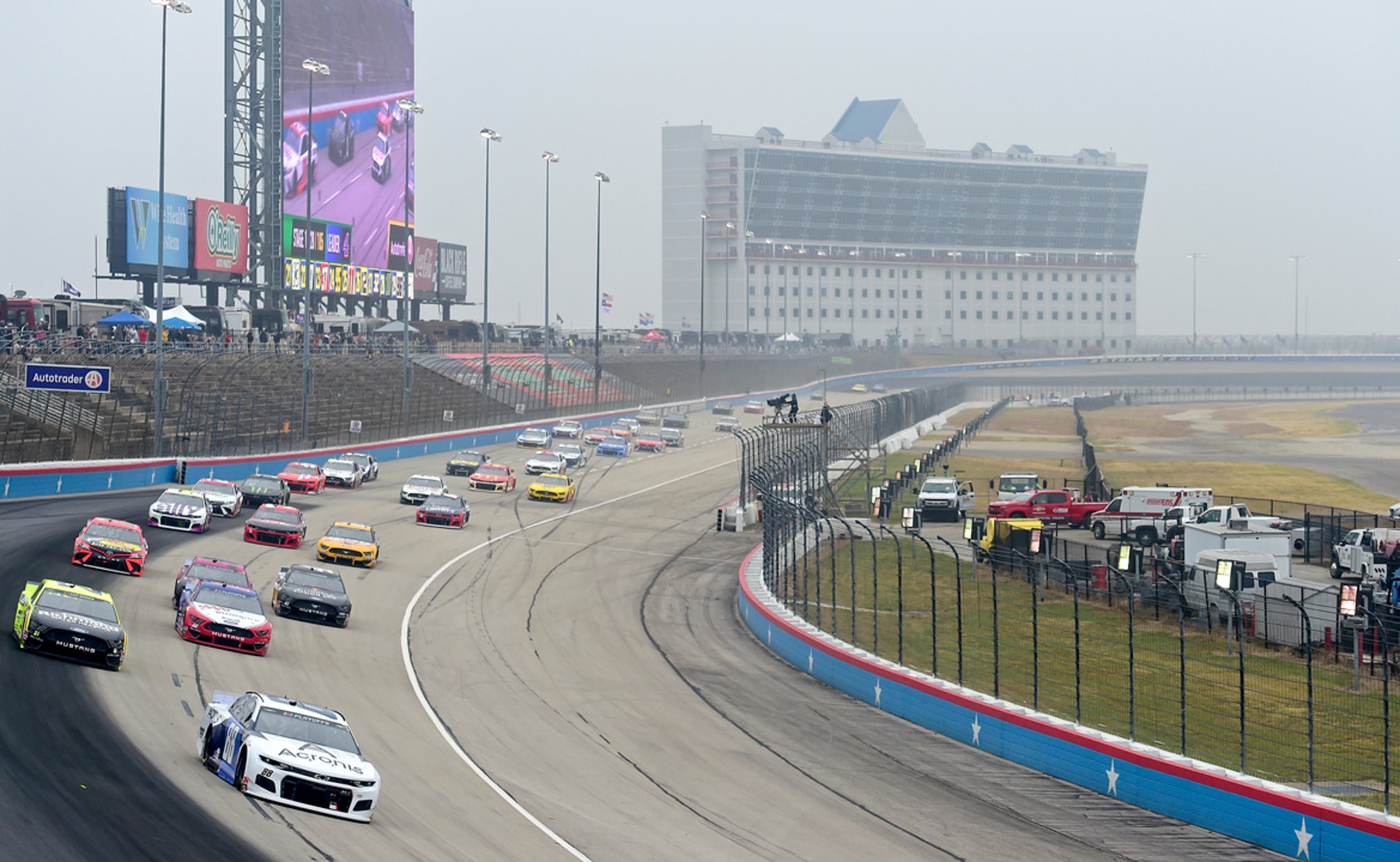 NASCAR only got 52 laps of its Cup Series playoff race in before mist and rain at Texas Motor Speedway forced it to be postponed until Monday, but Sunday will still go down as a day that impacted the 2020 playoffs.

Before the race started, NASCAR confiscated the spoiler from Martin Truex Jr.’s car, issuing a 20-point penalty and ejecting crew chief James Small from the event, as well as fining him $35,000.

The 20-point penalty dropped Truex from 31 points behind the current playoff cutoff to 51, making an already somewhat must-win situation for him at Texas or next Sunday at Martinsville into much more of one. Sunday's 334-lap race is scheduled to resume at 10 a.m. ET Monday.

It is unclear whether JGR will appeal the penalty, as NASCAR confiscated the spoiler after it initially had passed tech. NASCAR’s appeals process allows for expedited appeals during the playoffs so any decision would be known before Martinsville.

Truex had to start at the rear Sunday and, with the help of pit strategy, was up to fifth at the time the race was suspended. Car chief Blake Harris was serving as crew chief.

"Our car is good," Truex said. "We’ve got speed and good balance. ... The guys are doing a good job. Blake is doing a good job on the box for the first time and the communication and all that stuff went good."

At that point, Kevin Harvick was one lap down in 36th after hitting the wall. With drivers complaining about the mist but NASCAR keeping the race going, Harvick’s car slid into the wall. Leading at the time, Harvick believed he skidded on the area treated with a traction compound, which is designed to create grip but can be like ice when it gets wet.

"Obviously we’re battling a mist and I think just being the first one to it, it never turned," Harvick said on the TV telecast.

"The PJ1 [traction compound] is like ice because it just gets this little bit of moisture and just gets slick. I was not expecting it to be that slick and just wound up in the fence. ... I think it will be OK."

Harvick, who has a series-best nine victories this year, said the steering wasn’t damaged and the car was decent after the accident. He will need to get his lap back. Even if he finished 35th, he was sitting six points ahead of the cutline at the point the race was suspended, and he had the potential of gaining many positions.

"I think unfortunately I was the first one to the kind of wet race track. ... [I] just went in there and I just committed and got to the center of the corner and the front just took off and didn’t stop until I hit the fence," Harvick said.

The one driver who had no worries was Joey Logano, who already has advanced to be among the four championship finalists Nov. 8 at Phoenix thanks to his win Oct. 18 at Kansas Speedway. There are seven drivers vying for the remaining three spots, which go to any of the seven who win at Texas or Martinsville, with the remaining positions available by points.

Noah Gragson took the lead at Texas with 15 laps remaining and thought he had enough of a lead to win and clinch a bid to the championship. But Harrison Burton, with a faster car, caught him in the final turn for the victory.

Instead of the win, Gragson is 24 points behind the cutoff going into Martinsville. Chase Briscoe is in with a win at Kansas, and then Austin Cindric is up by 14 points, Justin Allgaier is up by eight points and Justin Haley is up by four points over Brandon Jones, the first driver on the outside looking in. Ross Chastain is 15 points behind Haley, then Gragson (24) and Ryan Sieg (43).

"Normally I feel like I get excited in moments like that, but I was more patient and calm than ever," Gragson said. "I felt like I was really well prepared for this moment.

Sheldon Creed won a wild race at Texas, which included an incident where Ben Rhodes appeared to turn Christian Eckes on purpose.

For Creed, the victory vaulted him into the championship at Phoenix, where he and GMS Racing teammate Brett Moffitt will be among the four drivers who will vie for the title.

Austin Hill, who finished second, is 27 points ahead of the cutoff while Zane Smith is 12 points ahead of defending series champion Matt Crafton, the first driver on the outside looking in. Grant Enfinger is 42 points behind Smith, while Rhodes is 45 points behind and Tyler Ankrum is 79 points back.

Rhodes could have a hard time in facing a must-win situation at Martinsville, considering his hook of Eckes resulted in retaliation by Eckes teammate Chandler Smith on the final lap at Texas and potentially more at Martinsville. NASCAR said Rhodes likely will not be penalized for the move, indicating that NASCAR felt it wasn’t intentional.

"It’s two times the guy runs me out of the groove, and I almost knock down the Turn 4 wall and completely on the gas hand-over-fist,” Rhodes said. “I’m trying catch the truck and end up hitting him, ... which is unfortunate."

Eckes: "[I] was going to probably clear him and he just turned left as hard as he could and hooked me. You could see that he turned left with the way the truck reacted after he turned me. Unfortunately, it’s just the nature of the business."

Twelve Cup races this year have been impacted by weather. Three (Daytona 500, Talladega in June and Texas) were pushed to Monday.

— Denny Hamlin on 23XI Racing being the name for the new team co-owned by him and NBA icon Michael Jordan.

It's Beshore for Busch
As unforeseen as it might have been, Kyle Busch will have a new crew chief for the 2021 season. Bob Pockrass breaks it down.
18 hours ago