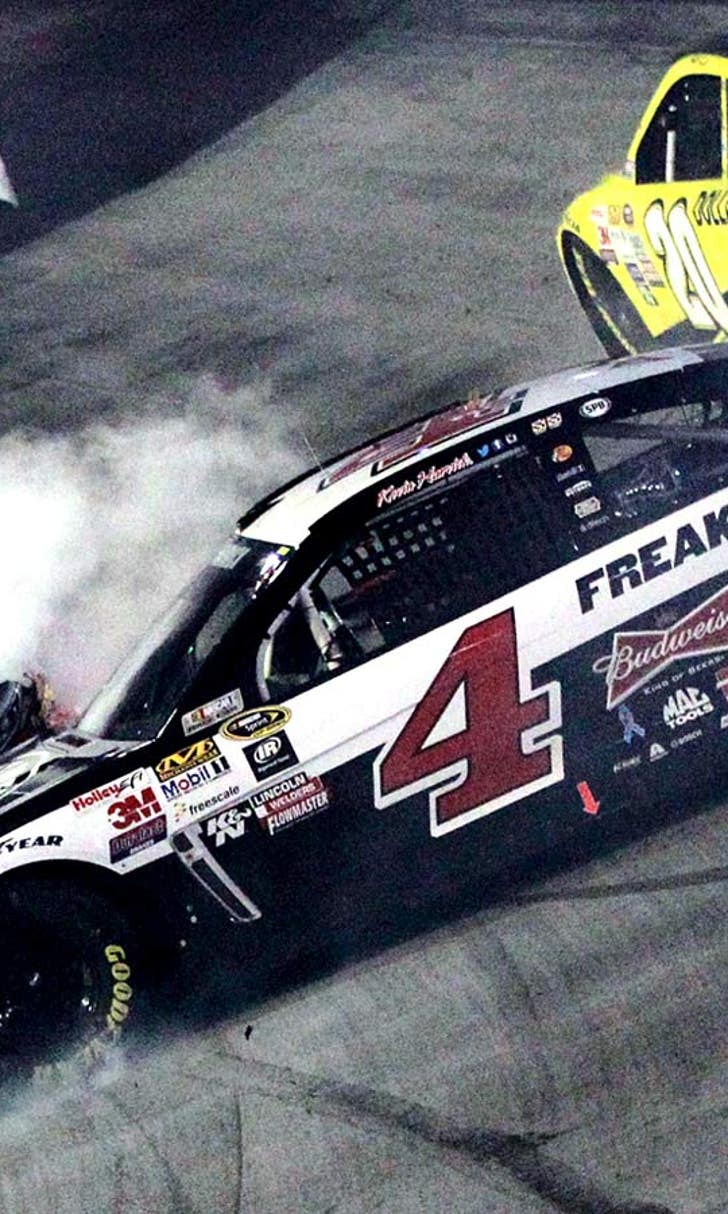 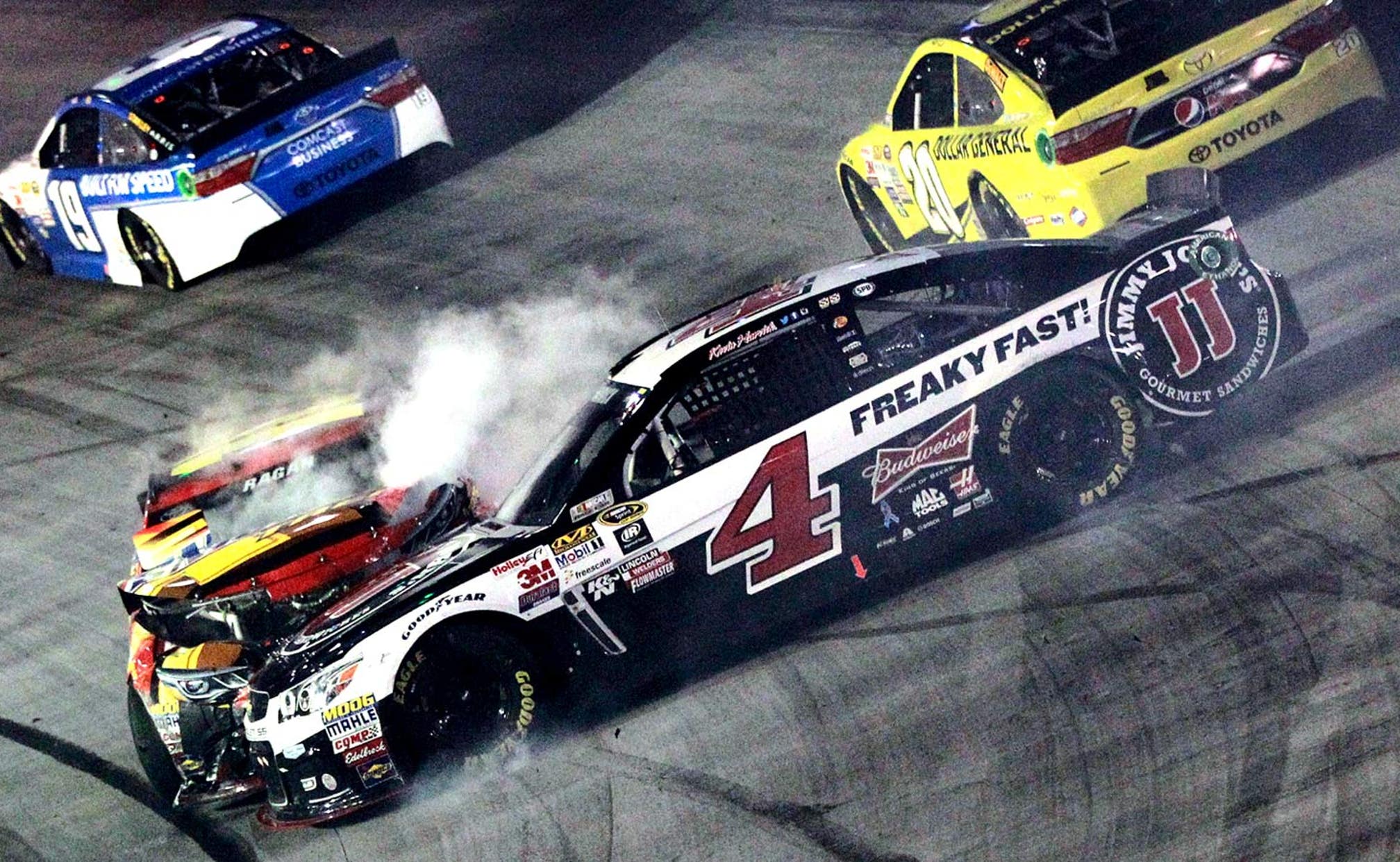 Impressive run of top-10 finishes comes to an end for Harvick, Logano and Truex 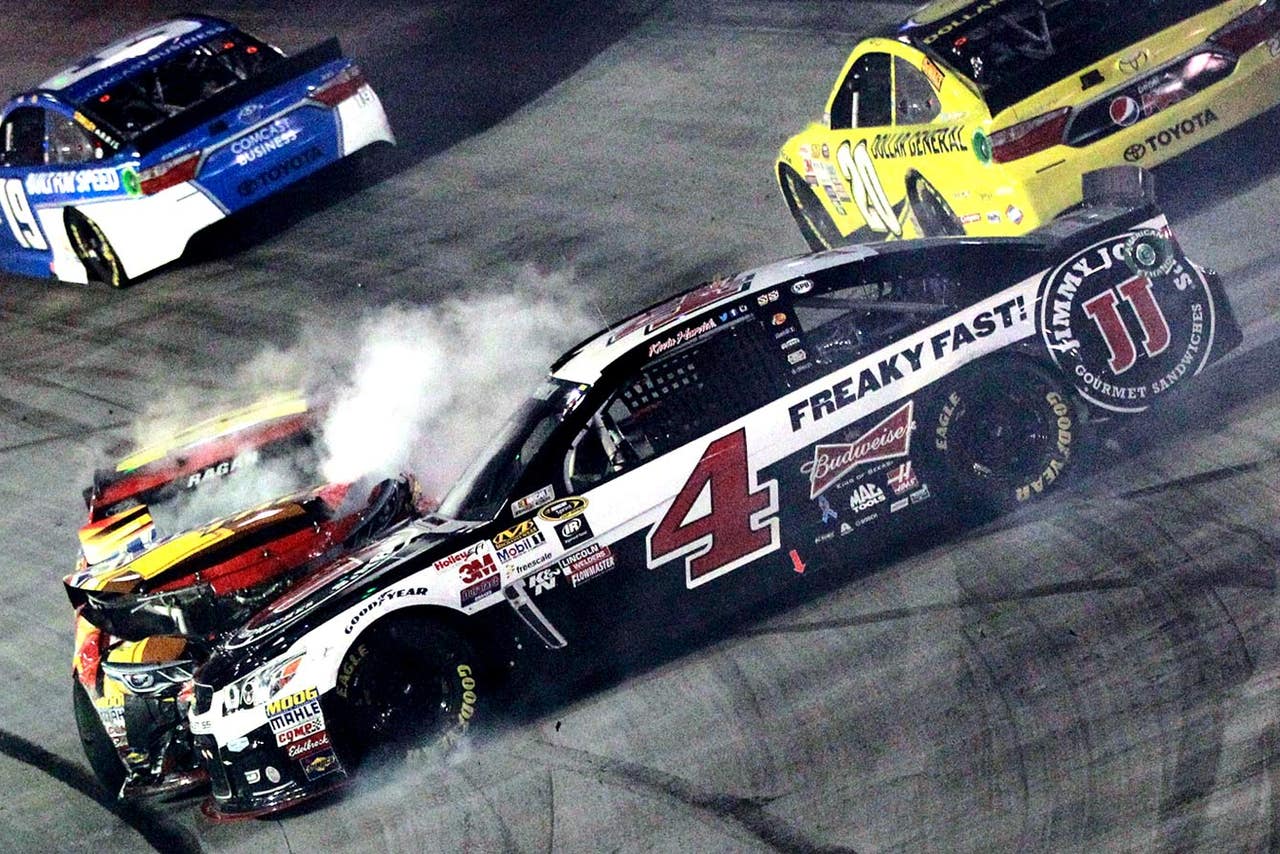 Sunday's NASCAR Sprint Cup Series race at Bristol Motor Speedway ended Matt Kenseth's 51-race winless streak -- but the 511-lap event also put an end to a few other streaks that were not celebrated at the end of the night.

Heading into the weekend, defending series champion Kevin Harvick, Daytona 500 champion Joey Logano and Furniture Row Racing's Martin Truex Jr. were all hoping to extend a streak of seven consecutive top-10 finishes. However, when Kenseth took the checkered flag at the end of the night, Truex was 29th, Harvick 38th and Logano 40th -- a far cry from the first seven races of the season.

For Truex and Logano, the day got off to a bad start, and neither was able to recover.

Starting from the sixth spot, Logano was caught up in a Lap 20 incident when teammate Brad Keselowski lost control of his No. 2 Team Penske Ford while racing around a lapped car.

When Keselowski's car bobbled, Logano had nowhere to go but in the back of his teammate, sending both cars hard into the inside wall. With significant damage, the team was forced to make lengthy repairs behind the wall and fall out of contention.

"It's so early in the race and I hate to see that happen," Logano said after the incident. "Brad got loose in front of me. You see it coming and you're checking up as quick as you can, and the next thing you know we're both going to the inside wall. It's just such a bummer for both Penske cars. It's unfortunate."

Truex's issues arose after the lengthy rain delay, but not long after the race went back to green flag conditions.

The driver of the No. 78 Furniture Row Racing Chevrolet had worked his way into the top 10 in the opening 36 laps of the race, but began to drop back when he felt a vibration inside the car on Lap 155. Truex was forced to pit road under green for a loose right-front wheel and fell three laps down to the leaders.

Mired in the pack multiple laps down, Truex was never able to recover and work his way back into contention. On Lap 292, his day took another turn for the worse when he was forced into the wall and suffered damage to the left front of the car.

"It's a tough break," Truex told FOXSports.com after Sunday's race at Bristol. "I'm not sure how that happens, to just get a loose wheel like that in the first run. We ran 60-70 laps, whatever it was, and that was the wheel they put on to go through tech (inspection), it's odd it shook itself loose. This place is rough and sometimes that happens."

While Logano and Truex had issues early, it appeared Harvick was well on his way to another top-10 finish, if not more. The driver of the No. 4 Stewart-Haas Racing Chevrolet had one of the best cars all weekend long, and was a prominent figure at the front of the field during Sunday's race.

Out front six times throughout the night, Harvick led more laps than any other driver (184), but was not able to avoid trouble just past the 300-lap mark.

Harvick was running third when Jimmie Johnson got into the back of rookie Jeb Burton, triggering an incident just past the start-finish line. David Ragan had nowhere to go and was sitting in the middle of the track when Harvick could not slow down in time and slid into the front of the No. 18 Toyota.

The incident broke the lower control arm on the No. 4 Chevrolet and forced the team behind the wall for major repairs. Harvick eventually returned to the race, but finished 45 laps down.

After starting the season on such a high note, each of these three drivers was forced to deal with adversity throughout Sunday's lengthy day in Bristol. Despite their struggles, the trio remains atop the series standings, with Harvick and Logano locked into the Chase with wins.

"You just never know about Bristol -- a lot of strange things can happen here," said Truex. "Who would have thought that our 29th-place finish would have been the best among the top five in the point standings. Very weird."