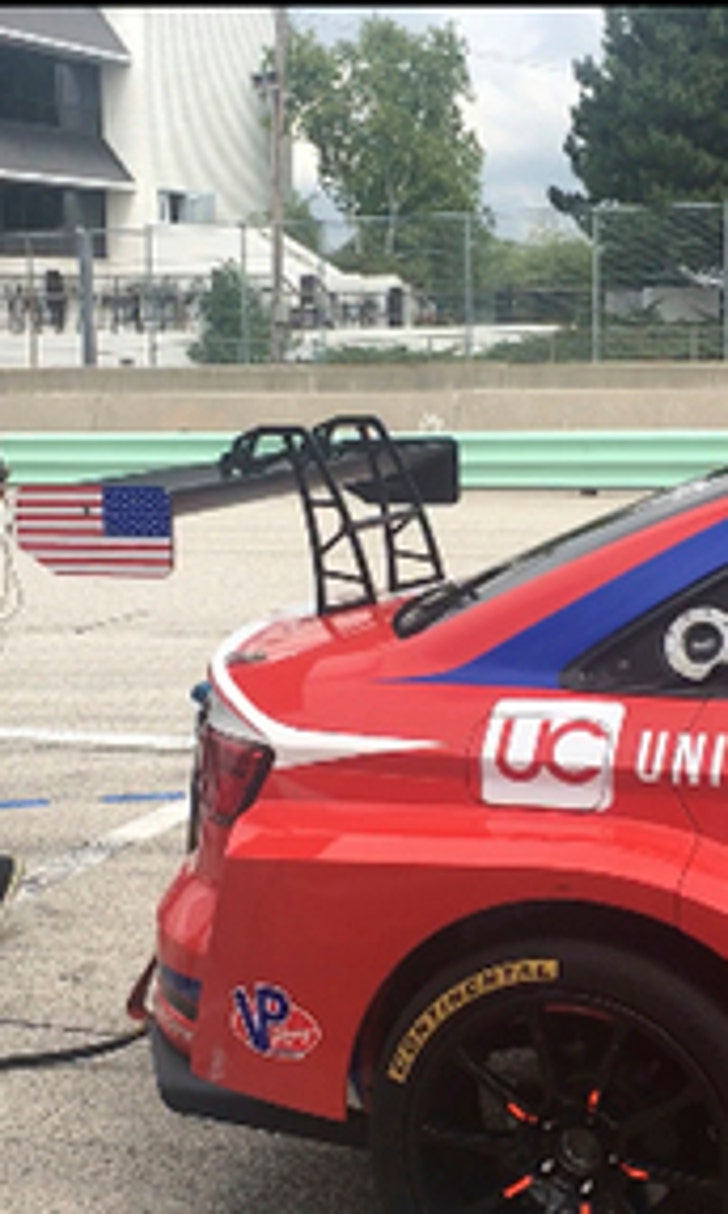 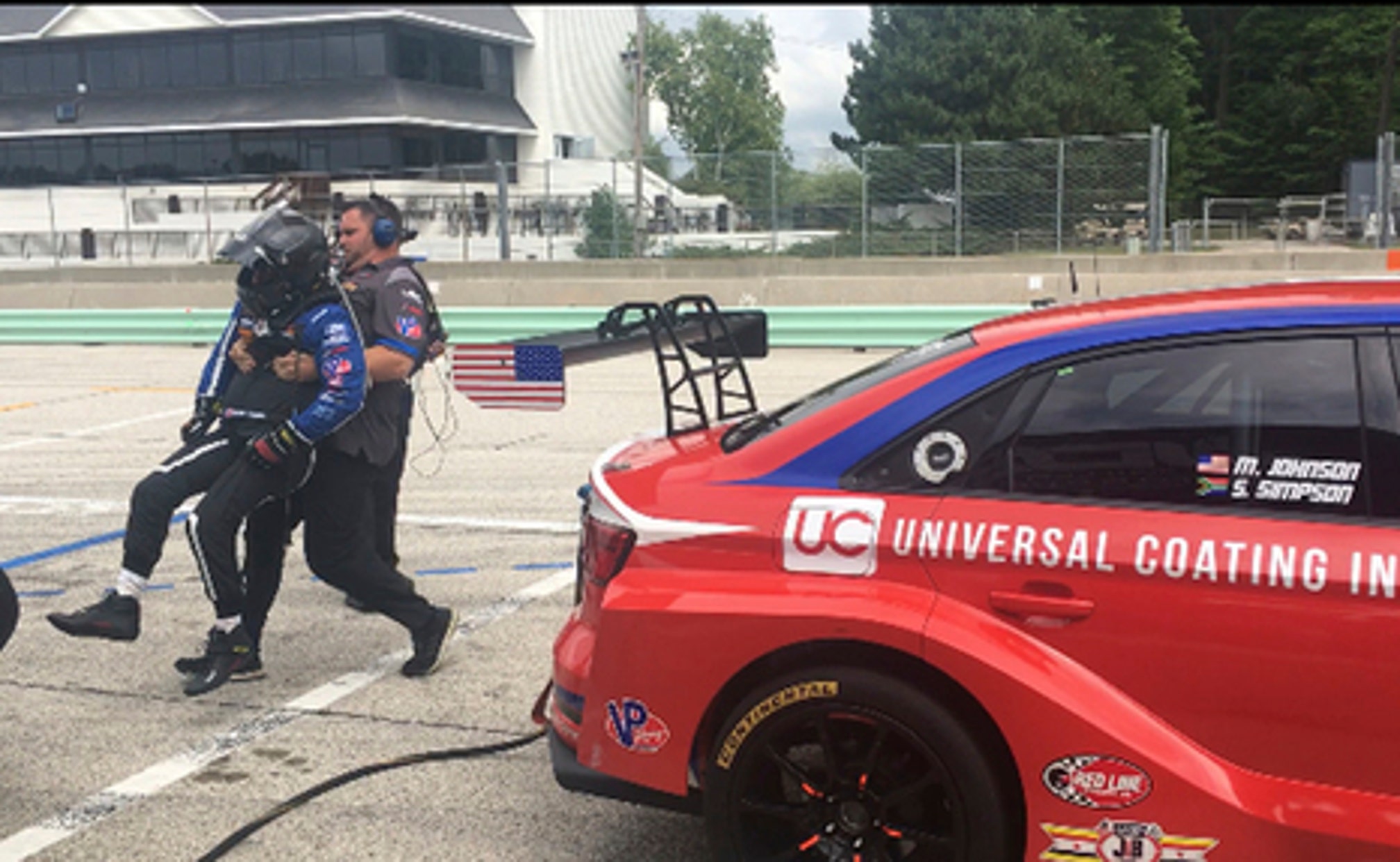 Michael Johnson's big grin never seems to disappear because he is doing what he loves.

The smile sticks out as he drives the No. 54 Audi for JDC-Miller Motorsports in the Continental Tire SportsCar Challenge. So does his other set of wheels - the wheelchair he uses when he's not behind the wheel.

''I do it (racing) to get myself out of the wheelchair. It's a big thing,'' said Johnson, who is paralyzed from the waist down. ''I'm a totally separate person (in the car). I don't have to deal with any of the stresses in life. I can really just focus on what I'm really good at - driving a race car and having fun doing it.''

The native of Flint, Michigan, is one of a handful of disabled race car drivers competing worldwide at the top levels. One of his heroes, former open-wheel star Alex Zanardi, lost his lower legs in a crash in Germany nearly two decades ago. Now 51, Zanardi, a two-time CART champion who also drove in Formula One, returned to racing, won in world touring cars and is still driving .

Turns out the 25-year-old Johnson is good enough to win, too. Johnson and co-driver Stephen Simpson combined for their first win on July 21 at Lime Rock, Connecticut. It was their third straight podium of the season and another positive sign for Johnson in his recovery from a devastating crash.

''It's been a fantastic evolution,'' said Simpson, who's helped coach Johnson for the past seven years. ''We've gone on a long road together.''

Johnson won 14 national motorcycle championships by age 12 and was on the cusp of landing a deal for a permanent ride with a manufacturer when his budding career skidded to a dramatic halt on a dirt track in Canada in 2005. He was involved in a crash in Sarnia, Ontario, suffering a broken collarbone, broken left ankle, broken left leg, broken ribs and, worst of all, two fractured vertebrae in his back, which caused the paralysis.

The first thing out of his mouth was, ''Don't make me quit racing,'' said his father, Tim, a former motorcycle racer.

Four rods and 15 screws were inserted in Michael's back during an 11-hour operation. Johnson spent a couple of months in the hospital and another month at home in bed.

On Christmas Eve 2006, Johnson took a spin in a specially equipped go-kart with hand controls in the parking lot of his father's phosphate coating business, which has allowed the family to help him pursue his dreams.

After getting clearance from his doctors, Johnson won a go-kart title and his career on four wheels began a rapid ascent.

IndyCar team owner Sam Schmidt, who also was paralyzed in a crash, advised Johnson to get involved with Skip Barber Racing. After lawyers approved his entry into the formula car series, Johnson ran a partial schedule in 2010 with modified hand controls. He competed in the entire summer series the next year, winning at Watkins Glen and twice at Elkhart Lake among seven podium finishes.

''It's not a surprise,'' Tim Johnson said. ''There's no doubt in my mind he would have been a professional (motorcycle) champion. He had the passion and, more importantly, he had the work ethic to make it happen.''

Michael Johnson spent two seasons in USF2000 and two more in Pro Mazda as he chased an open-wheel ride with an eye on competing some day in the Indianapolis 500, a dream he still has.

Acquisition three years ago of a hand-controlled driving system produced by Guidosimplex of Italy gave Johnson an edge he needed. His steering wheel features two rings, one for the throttle, the other to brake, and paddle shifters allow him to grip the steering wheel to navigate the serious turns on the road courses used by the series.

''What he's able to do is nothing short of amazing when you think he's only operating with a third of the sensory perception that a normal person has when they're sitting in the seat of a race car,'' team engineer Cole Scrogham said.

The 10-race Continental Tire Challenge series - Johnson and Simpson compete in the street tuner class, where the cars can reach speeds of around 140 mph - is the foundation for grooming amateur drivers to compete and move up to IMSA's WeatherTech Series. Teams are required to make a driver switch every race, and Johnson and Simpson are able to accomplish it in competitive times thanks to Johnson's trainer Josh Gibbs, who pulls him from the car and carries him behind the wall on pit road.

There have been setbacks. Johnson has crashed twice in the past three years, most recently in practice for the IMSA season-opener at Daytona in January. He was second on the time sheets when his brake linkage snapped. The crash broke a leg.

Johnson, who underwent stem cell surgery in Portugal in 2009 in hopes of improving his chances of walking again, recovered and returned to race at Mid-Ohio in May after being cleared by series officials. Johnson responded by qualifying on the front row and leading a race for the first time.

''It's amazing to see his resilience,'' said Mikey Taylor, who drives in the series and has coached and spotted for Johnson in the past. ''For sure, Michael still has a ways to go to be a professional like Stephen, but in the car he's equally as good and holds his own. I definitely think he's got a very strong career in sports cars ... in the higher ranks.''

Johnson also has a passion for spreading his message.

''It's a good feeling to know that I'm really one of only a select few that have gone this far,'' he said. ''I'm trying to help out as many people that are paralyzed in wheelchairs that I possibly can. Whatever challenges you're having, don't give up. There's always something that can be done.''