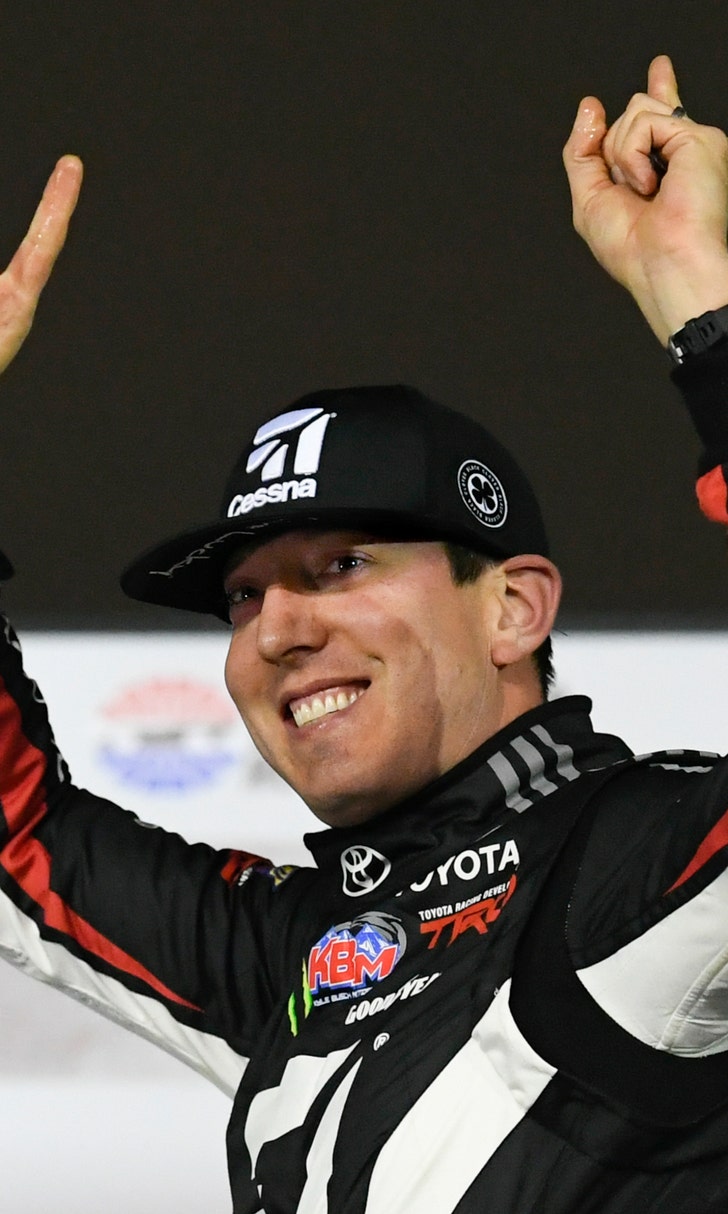 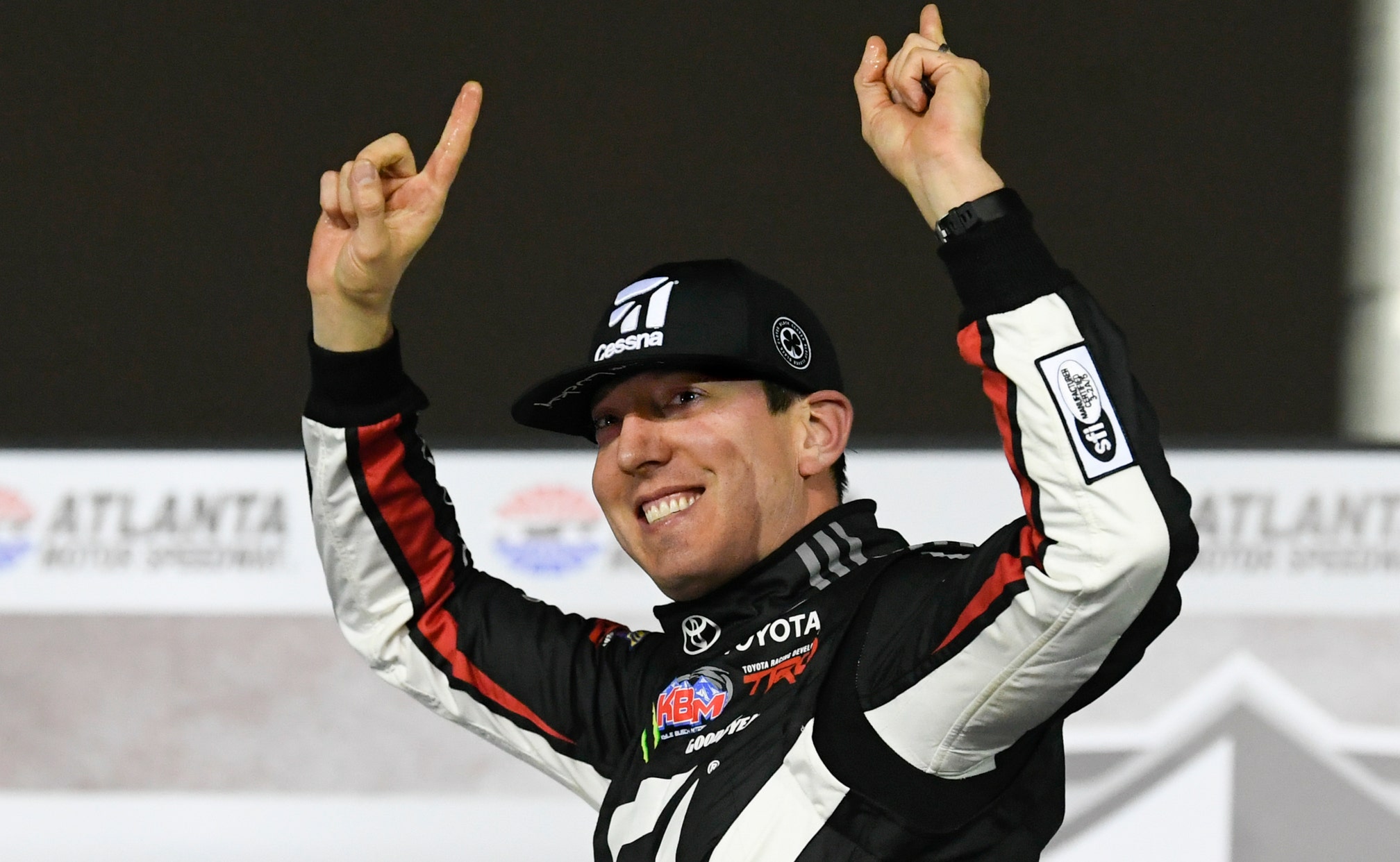 HAMPTON, Ga. (AP) — Brad Keselowski had his hands full with a new car and a new rules package — enough to make for a trying race — before a stomach virus nearly flattened him.

Keselowski missed a portion of final practice, received intravenous fluids at Atlanta Motor Speedway's medical center, and had a replacement driver on standby Sunday in case he couldn't make it the full 500 miles.

Keselowski recovered from flu-like symptoms to win at Atlanta and move past Mark Donohue as the winningest driver in Team Penske history. It was the first win for Ford's new Mustang and a rebound for the manufacturer after Toyota swept the season-opening Daytona 500.

"A race car driver is who I am. It's what I do and what I love. I'm not going to let anything get in the way of it," Keselowski said after the win. "We had the team to win, of course things still have to go your way, but I don't want to be the reason why they don't."

He was admittedly hot, tired and somewhat dazed after 3 1/2 hour of racing. Had the event been one day earlier, Keselowski said he wouldn't have been healthy enough to drive. He lost nearly 6 pounds battling the illness but wasn't complaining after the win.

"Whenever you have a fast car, it's funny how fast those things disappear," he said.

Keselowski has proved his toughness before, most notably in 2011 when he won at Pocono just days after breaking his ankle in a crash while testing. This time he fell ill late Friday night after surprising fans in the Atlanta infield with beer during their rainy night of partying.

Keselowski's wife also was sick, and Keselowski missed the start of Saturday's final practice as Austin Cindric turned laps in the No. 2 Ford. Keselowski was able to complete two runs before practice ended, but medical workers took him via golf cart from the garage to receive treatment.

"Whatever we had, I'm not sure what we had, it floored both of us," he said.

NASCAR debuted its new competition package Sunday that is designed to improve the on-track product and help the smaller teams contend. But the first look at the new rules was tempered because the abrasive asphalt at Atlanta is unlike any other surface NASCAR will race on this season.

But it was clear NASCAR successfully designed a package that slowed the cars and bunched them closer together, which made for intense racing when the field was packed on restarts. The nature of Atlanta's challenging 1.5-mile speedway led drivers to eventually fan out into single file, which NASCAR is trying to avoid, but the racing is expected to improve moving forward.

"I saw a fairly entertaining race," said Steve O'Donnell, NASCAR's chief racing officer. "We didn't know what to expect, either, and we thought this package would showcase itself more once we got to the West Coast. All in all, we are satisfied with the outcome and we've got a lot of work to do to go back and review it."

NASCAR's final statistics showed most meaningful categories were up from last year, including lead changes (25), passes for the lead (35) and so-called quality passes.

Keselowski, meanwhile, raced to his 60th win for Roger Penske to pass Indianapolis great Donohue's mark as the team leader. He has won 27 of his 28 Cup victories for Penske.

"I think when you go back and know what Mark meant to our team as we were building it over time, it really set a mark that in some cases we thought nobody would ever beat it," Penske said. "But Brad had that on his windshield, he's been looking at that now for a year, and he said this was the year he was going to make it happen."

"All wins are special but some just mean more," Keselowski said. "And this one means more for many reasons. When you look at the list of (Penske) drivers, it's a pretty big list, and it's big not just with the amount of drivers but big with the superstar power, and just to be on that list as a winner means a lot, but to be on top of it means even more."

Martin Truex Jr. finished second in a rebound from his disappointing debut with Joe Gibbs Racing. His three JGR teammates swept the podium in the Daytona 500 while Truex failed to ever contend in his Toyota. He was unhappy after the race because he said lapped traffic slowed his shot at catching Keselowski.

"Just a little upset," Truex said. "We had the best car. We probably should have won that one."

Kurt Busch was third in a Chevrolet for Chip Ganassi Racing while celebrating his 650th career Cup start. Kyle Larson, his Ganassi teammate, led a race-high 142 laps but was taken out of contention by a speeding penalty.

"To finish third ... and to run with the who's who of the sport, it just shows Ganassi has got the right stuff," Busch said.

Kevin Harvick and Clint Bowyer rounded out the top-five in a pair of Fords for Stewart-Haas Racing.

Kyle Busch started last but drove through the field to finish sixth, a day after he became the Truck Series' career victory leader with 52 victory. JGR teammate Erik Jones was seventh, pole-sitter Aric Almirola finished eighth. Chris Buescher was ninth in a strong finish for JTG-Daugherty Racing, while Daniel Suarez finished 10th in another SHR entry.

Other items of interest from Atlanta:

LOOK OUT: There was a crash on pit road for the second consecutive race and B.J. McLeod was in both wrecks. He crashed with teammate Cody Ware as they headed to the entrance to pit road in the Daytona 500. At Atlanta, McLeod was hit by Ryan Preece as Preece was looking at his gauges and didn't see McLeod in front of him. The contact ended Preece's race.

UP NEXT: NASCAR heads to the West Coast for Sunday's race at Las Vegas Motor Speedway. Harvick is the defending race winner.