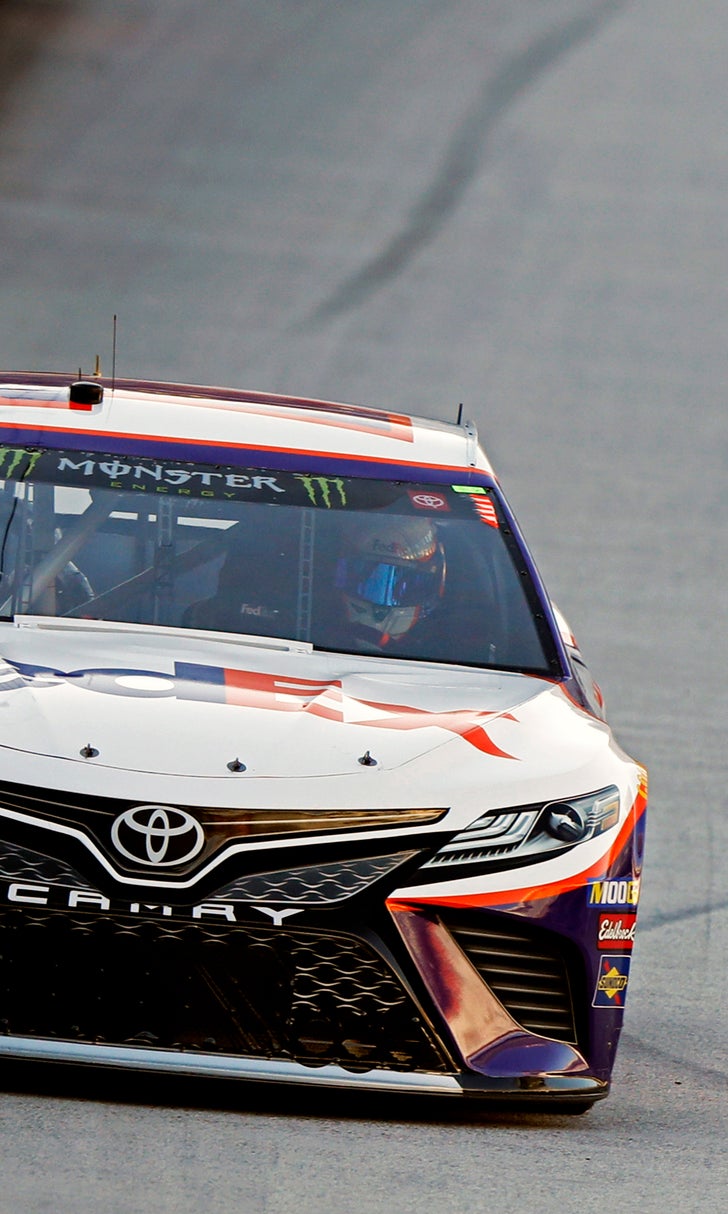 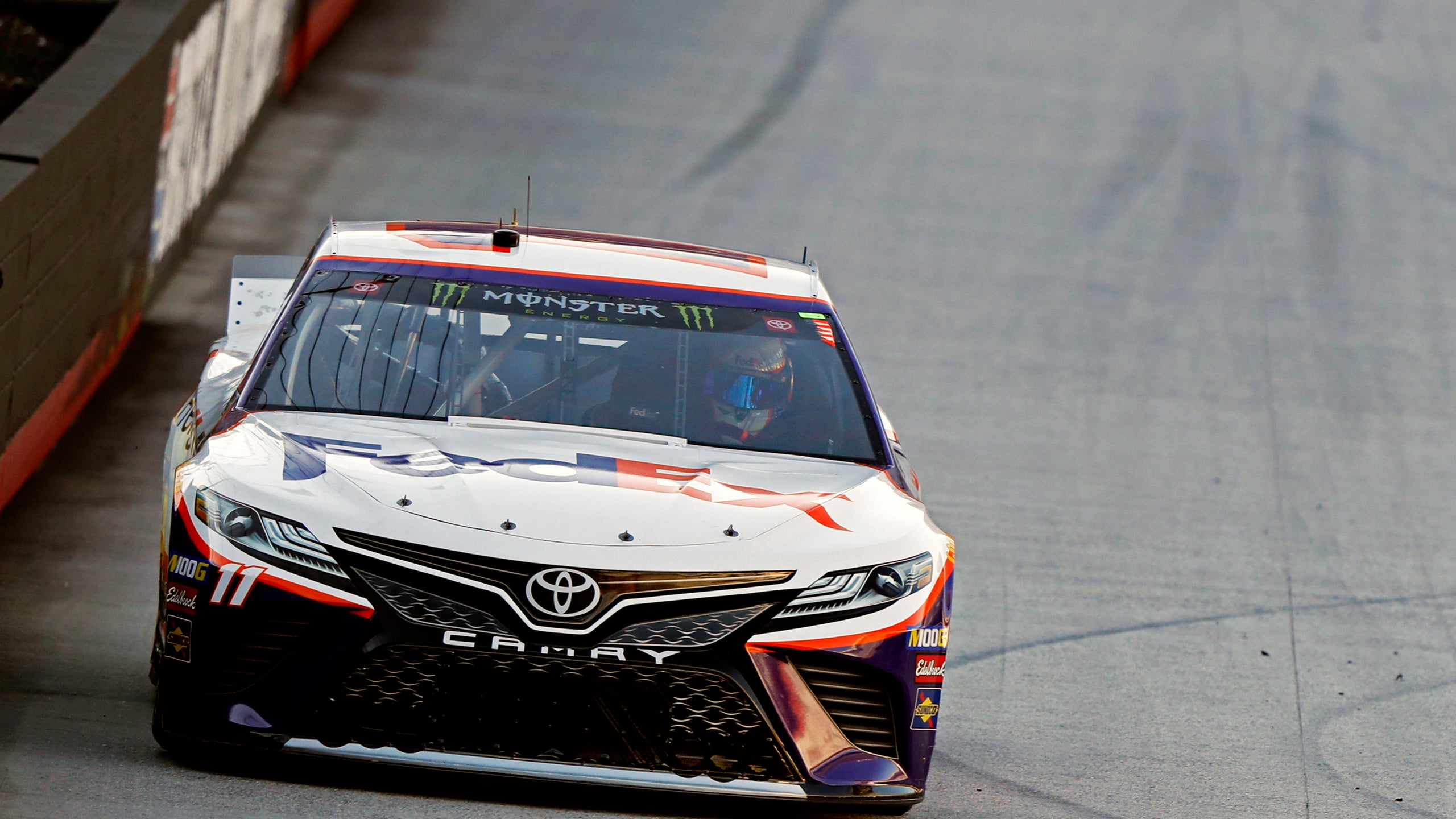 Hamlin wins 1st pole of season for Toyota and Gibbs

BRISTOL, Tenn. (AP) — Denny Hamlin has won the pole for Saturday night's race at Bristol Motor Speedway, a critical short-track showdown for drivers trying to qualify for the playoffs.

The Daytona 500 winner turned a lap at 129.230 mph in his Toyota for Joe Gibbs Racing in Friday's qualifying session. His effort bumped Kyle Larson to second and Larson is not locked into the 16-driver playoff field with three races remaining to fill the final seven slots.

Winless on the season, Larson is ranked 13th in the standings and briefly held the pole until Hamlin's fast lap. The two planned to watch Friday night's Xfinity Series race together sitting in the Bristol stands, so Hamlin took great delight in knocking him from the top starting spot.

"I was wondering why he was giving me the finger when I pulled in," said Hamlin, who won not only his first pole of the season but the first for Toyota and JGR.

Larson still feels good about a strong run that can push him into a playoff spot. Only nine drivers have locked up berths and a victory earns an automatic spot in the championship race.

"I feel like we've been points racing a little bit lately," Larson said. "I feel if it presents itself, we can be a little different and go after stage wins. We aren't locked in, but I feel good."

Martin Truex Jr. qualified third in a Toyota for Gibbs, while Chip Ganassi Racing had two Chevrolets in the top four as Kurt Busch will be lined up behind teammate Larson at the start of the race.

Aric Almirola, a driver still trying to qualify for the playoffs, was fifth and the highest qualifying Ford driver. He believes he'll have to fight for every position around the .533-mile concrete bullring.

"At this place you have to be aggressive all the time. Dodging lap traffic and cars on restarts and everything," Almirola said. "You have to be on full send all the time and you're right on the edge of out of control, and everything happens so fast that sometimes that's what jumps up and bites you is that things happen so fast."

Chase Elliott qualified sixth in a Chevrolet for Hendrick Motorsports, followed by the surprise of the session in Matt DiBenedetto, who was seventh for Leavine Family Racing just days after the team informed him he won't be back for a second season in 2020.

DiBenedetto was admittedly devastated by the news, said he has "no irons in the fire" for 2020 with the sudden decision he's being released, and the news came during the best season of his career. He's a career-best 23rd in the standings but Leavine is aligned with Joe Gibbs Racing, and Gibbs has a logjam of signed drivers and not enough Cup seats. Christopher Bell is expected to be promoted from the Xfinity Series into DiBenedetto's seat.

DiBenedetto understood the Gibbs situation all season, but hoped for a different outcome.

"I don't want to say I was blindsided, I was just trying to let my performance behind the wheel do the talking and hope that would prevail over everything but sometimes performance isn't everything," he said. "I hate it is coming to an end, but my entire career has been devastation at the time, but it's always been a better door opening. Every single time since I was literally a kid, it's been a tough journey and I'm accustomed to that."

Finally, Happiness For Bell
A winless 2020 was hell for Christopher Bell. But his first Cup Series win has all but erased last season, Bob Pockrass writes.
6 days ago

First Time For Everything
Christopher Bell passed Joey Logano late on the Daytona International Speedway road course to earn his first NASCAR Cup win.
February 21
those were the latest stories
Want to see more?
View All Stories
Fox Sports™ and © 2021 Fox Media LLC and Fox Sports Interactive Media, LLC. All rights reserved. Use of this website (including any and all parts and components) constitutes your acceptance of these Terms of Use and Updated Privacy Policy. Advertising Choices. Do Not Sell my Personal Info