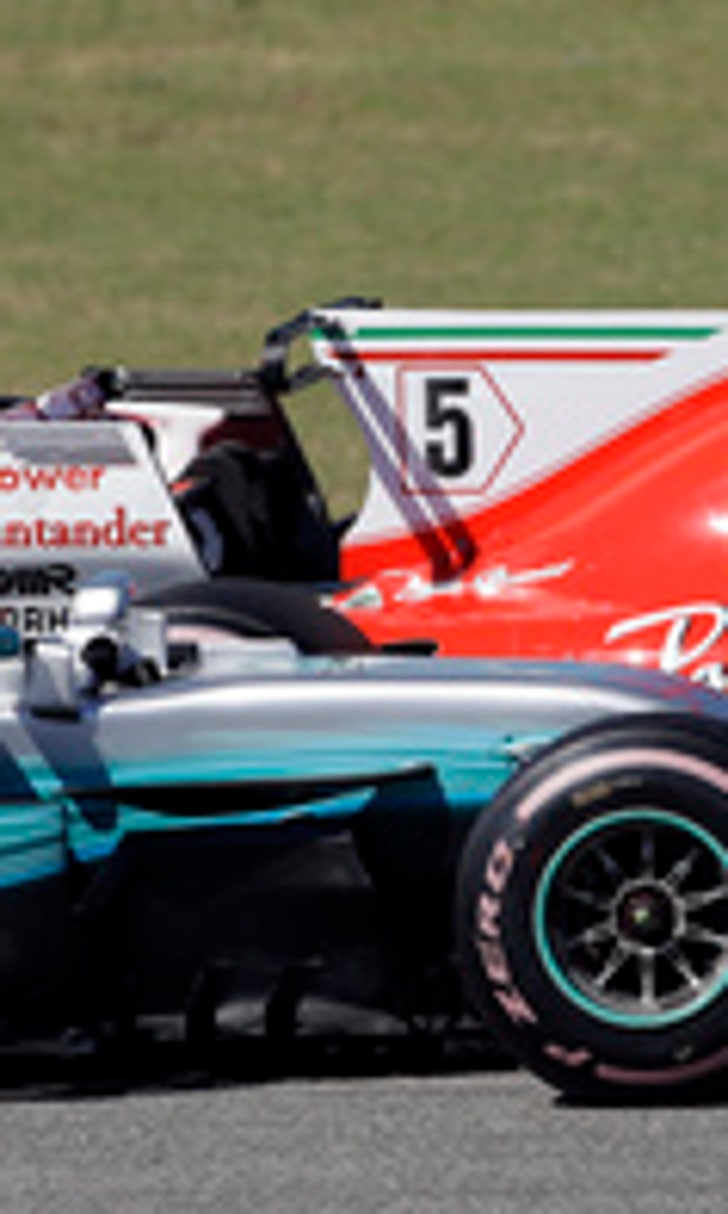 AUSTIN, Texas (AP) Lewis Hamilton further tightened his control on the Formula One season championship Sunday, winning the U.S. Grand Prix ahead of title rival Sebastian Vettel, who finished second in a race he said he had to win.

The Mercedes driver continued his absolute dominance of the Circuit of the Americas, winning at the track for the fifth time since 2012 and fourth year in a row.

The victory extended Hamilton's championship lead over Vettel to 66 points with three races left. While mathematically still possible, Vettel's title hopes are nearly wiped out as the series heads next week to Mexico City, where Hamilton won last year.

Vettel had pushed hard for the win and grabbed the lead out of a fast start, but Hamilton reeled in the Ferrari just a few laps later and Vettel's race and title hopes faded over the second half of the race.

Ferrari's Kimi Raikkonen finished third after Red Bull's Max Verstappen was hit with a 5-second penalty when race officials determined he left the track and gained an unfair advantage in passing Raikkonen on the final lap.

Hamilton is on a late-season charge toward a season championship that would further define his legacy in the sport. Formula One's first and only black driver could join Vettel as a four-time season champion. Only Germany's Michael Schumacher (7) and Argentina's Juan Manuel Fangio (5) have won more.

Hamilton had dominated practice and qualifying only to see Vettel rocket out to the front at the start.

The Ferrari bolted off his line and Hamilton moved left to try to squeeze Vettel into the inside of the first turn. The German held his ground, cut through the corner and tucked the nose of his car in front as the cars did the slingshot left turn back down the 130-foot elevation,

Vettel's advantage was short-lived and quickly collapsed under the pure power that Hamilton's Mercedes had shown all week. Hamilton reeled Vettel back in by lap six and passed him into the turn at the end of the circuit's long straight. It was the same move on the same turn Hamilton used to pass Vettel to win the race in 2012.

The duel was briefly engaged again on lap 20. Hamilton pitted for fresh tires and emerged only a split second ahead of Vettel, who had already stopped. Vettel missed his chance at the lead when he ran wide on a turn - the same one where he spun into the gravel on Friday - while Hamilton was leaving his garage.

The moment missed, Hamilton gave him no chance for another one as as the Ferrari driver saw his season title hopes evaporating with each lap. Vettel then found himself fighting just to hold on long enough to extend the championship for another week.

Anything lower than fifth place would have handed the title to Hamilton and Vettel dropped as low as fourth late in the race. A hard-charging Verstappen forced Vettel to make a second tire change, but he powered back to toward the front.

Red Bull's Daniel Ricciardo saw his run of three straight podium finishes and four in the previous five races end when his race ended on lap 16 with an engine failure.

Carlos Sainz' finished seventh in his first race with Renault after switching from Toro Rosso.