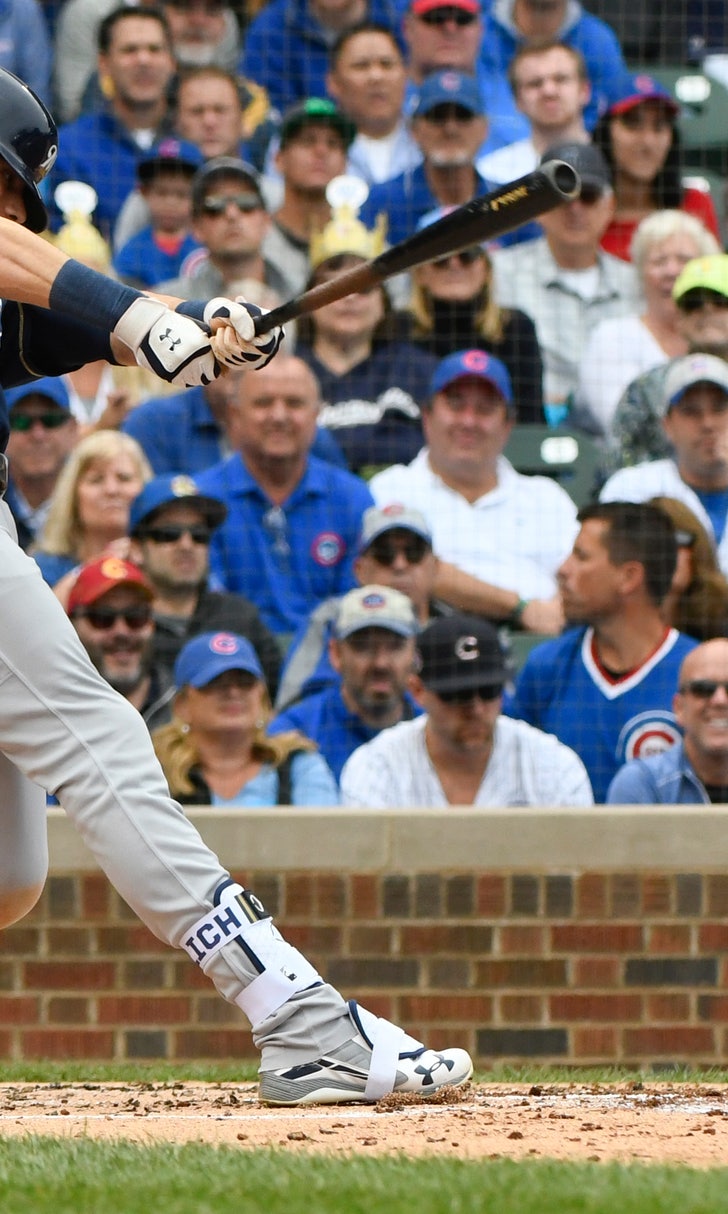 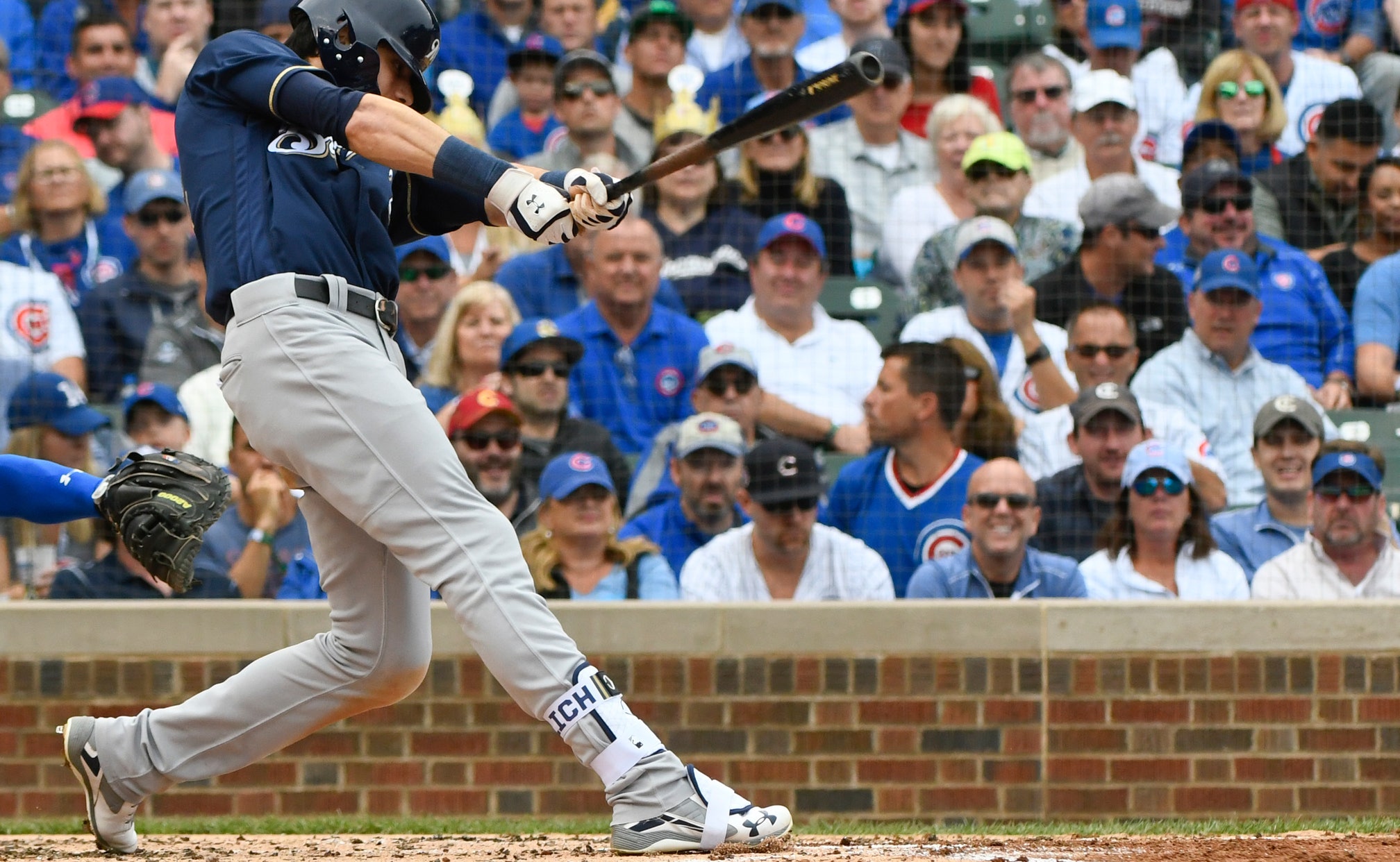 A division title is much more fun than a Triple Crown.

Yelich collected three more hits as the Milwaukee Brewers won their first NL Central title since 2011, beating the Chicago Cubs 3-1 on Monday in a tiebreaker game. The silky-smooth slugger stalled in his bid for the league's first Triple Crown in decades, but he starred once again as the Brew Crew captured the biggest prize of the day.

"I know how hard it is to get to this point and I'm proud to be a part of this group," Yelich said as Milwaukee's boozy party swirled around him, filling every inch of the cramped visitors' clubhouse at Wrigley Field.

Lorenzo Cain hit a go-ahead single in the eighth inning to help Milwaukee to its eighth straight win and home-field advantage throughout the NL playoffs. The Brewers will host the wild-card winner starting Thursday in the best-of-five Division Series.

Chicago stays at Wrigley for Tuesday night's wild-card game against Colorado. The Rockies lost 5-2 to the Los Angeles Dodgers in Monday's second tiebreaker for the NL West title.

"It's no fun. Of course we'd prefer the other route," manager Joe Maddon said.

It's a quick turnaround after falling short in their bid for a third straight division title, but the Cubs will have ace left-hander Jon Lester on the mound for the elimination game.

"We'll be ready. This team has responded all year," said Anthony Rizzo, who homered for Chicago's run.

Yelich singled home Milwaukee's first run and won the NL batting title with a .326 average. He had 110 RBIs, one behind the Cubs' Javier Baez, and finished with 36 home runs, two shy of Colorado's Nolan Arenado. The tiebreakers were game 163 of the regular season and Arenado's homer counted in the totals.

Joe Medwick in 1937 was the last NL player to win the Triple Crown. Miguel Cabrera did it for Detroit in 2012.

Milwaukee trailed Chicago by as many as five games in September, but manager Craig Counsell's club pushed the season to an extra day with a furious finish and then used its deep lineup and bullpen to outlast the playoff-tested Cubs.

"It just shows the heart and the mentality that this team has," Cain said. "Never give up. Continue to fight each and every day in each and every at-bat. We're going to continue to do that in the playoffs."

Orlando Arcia, batting in the eighth slot, had a career-high four hits, and Josh Hader closed out another dominant relief performance for the Brewers.

"All the guys in the 'pen, they're attacking the zone and putting us in a good position to win ballgames," Hader said.

The game was tied at 1 before Milwaukee opened the eighth with three straight hits. Arcia singled on a 0-2 pitch from Justin Wilson (4-5), Domingo Santana had a pinch-hit double and Cain greeted Steve Cishek with a single back up the middle.

After Yelich struck out swinging — a rare occurrence during an extraordinary stretch for the NL MVP favorite — Ryan Braun got the Brewers an insurance run with a run-scoring single to center.

It was more than enough for Milwaukee's vaunted bullpen. Corey Knebel (4-3) extended his scoreless streak to 16 1/3 innings with a perfect seventh, and Hader worked two innings for his 12th save.

Rizzo had one last chance for Chicago, but he flied to right with Baez on second for the final out . When it was over, Hader wrapped his arms around catcher Erik Kratz as the rest of the Brewers poured out of the dugout.

"We could hear 'em, we could really hear them and we fed off of that," Yelich said. "We wanted to bring this home for them."

Yelich also heard repeated "MVP!" chants when he singled in each of his first three at-bats. He drove in Arcia with his two-out hit in the third.

Jhoulys Chacin sailed into the fifth inning with the lead, retiring 11 of his first 12 batters. But Rizzo led off with a massive drive to right for his 25th homer, tying it 1.

The crowd roared as Rizzo rounded the bases and then popped out of the dugout for a curtain call.

Chicago had a chance to grab the lead in the sixth, but Joakim Soria escaped the threat by striking out Baez with runners on first and second.

"That was the big moment," Counsell said.

Chacin allowed one hit in 5 2/3 innings, setting up Milwaukee's bullpen quite nicely. The right-hander struck out three and walked two in another solid effort in a career year.

Quintana kept the Cubs in the game with another stingy performance against Milwaukee, allowing one run in five-plus innings. The left-hander is 4-1 with a 2.13 ERA in seven starts against the Brewers this year.

The Rockies and Cubs split six games this season, with each team scoring 33 runs.