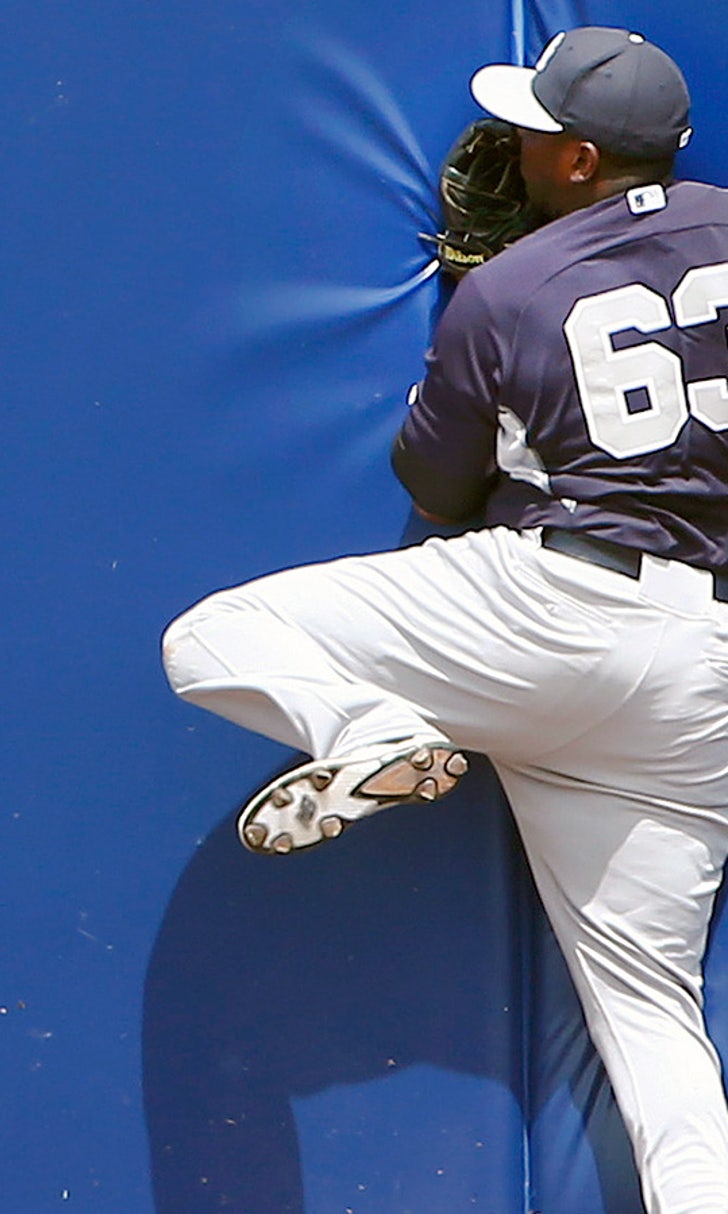 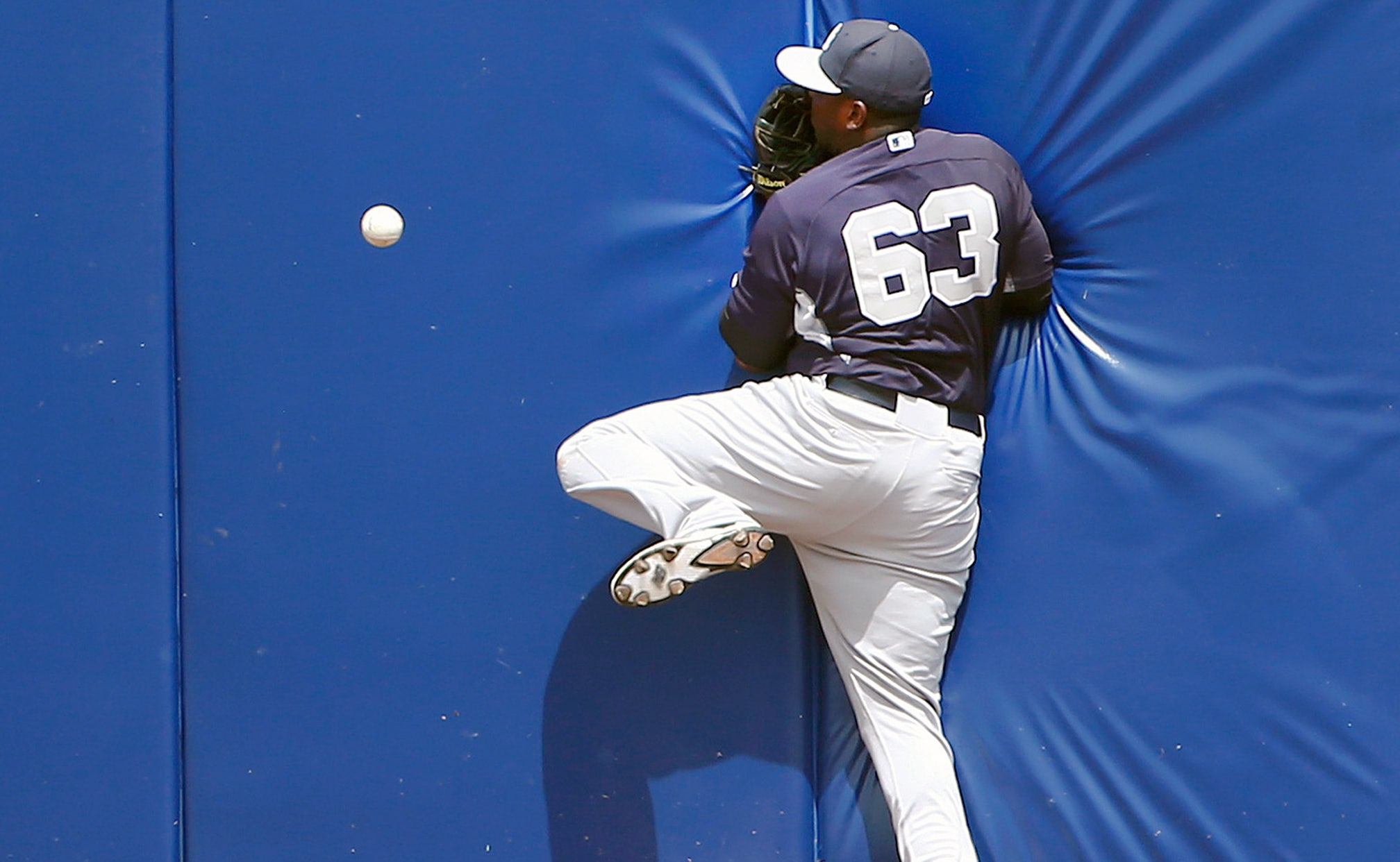 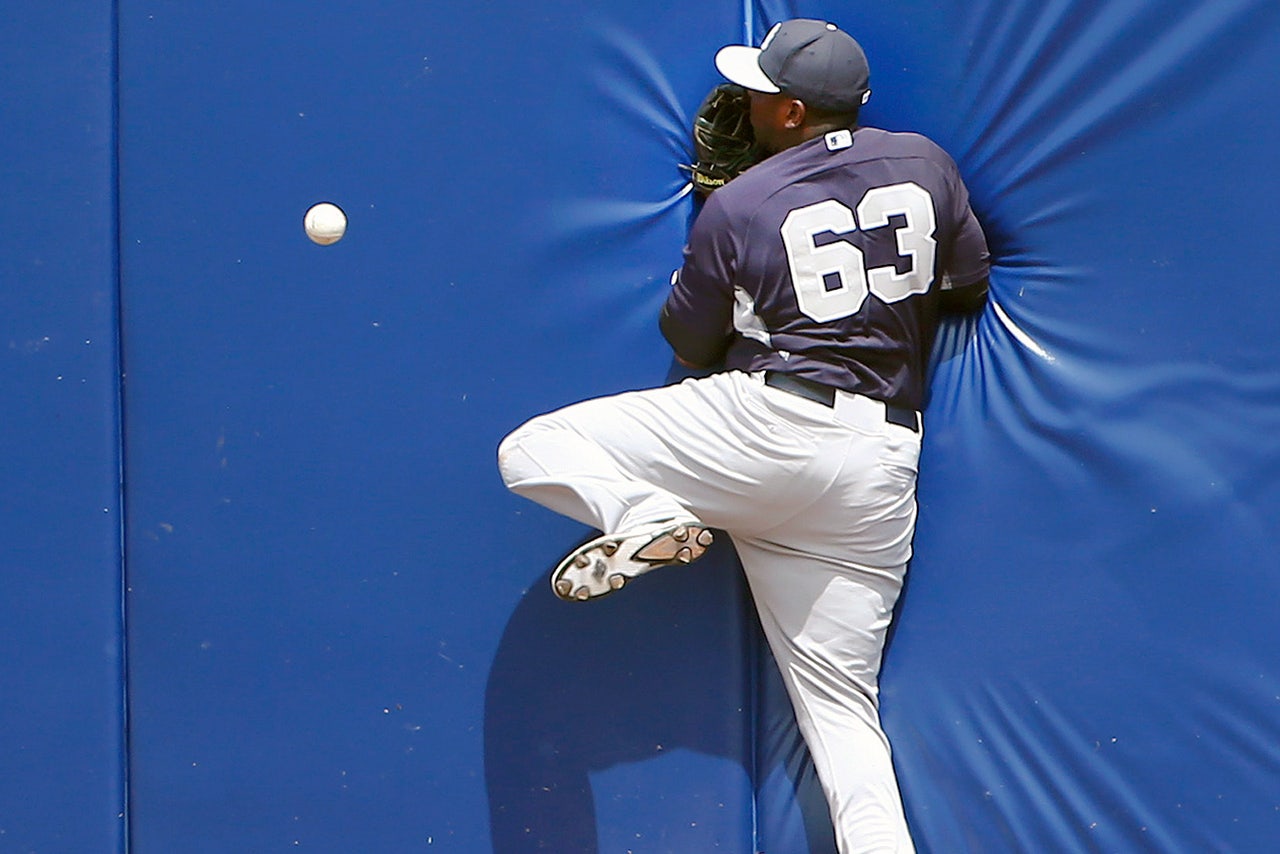 Yankees center fielder Jose Pirela sustained a concussion after crashing into the wall on Juan Lagares' inside-the-park home run, the first of three long balls off CC Sabathia, and the New York Mets beat their crosstown rivals 6-0 behind a dominant effort from Matt Harvey.

David Wright and Lucas Duda also connected off Sabathia, in his second start after having major knee surgery last year.

Harvey allowed two hits over 5-2/3 innings in his fourth spring start after having Tommy John surgery in October 2013.

''That was a good test, and obviously the work load is increasing,'' Harvey said. ''I felt pretty good into the sixth inning and was commanding pretty much every pitch I threw.''

Harvey mixed in sliders, curves and changes without having to dial up the fastball into the high 90s.

''The big thing is, coming in, I knew (command) possibly could be an issue with Tommy John surgery. For me, I was really concentrating on throwing strikes and pounding the zone,'' said Harvey, who has allowed just one walk in 14-1/3 innings.

Leading off the bottom of the first, Lagares drove a pitch to straightaway center field. Pirela, the versatile prospect, crashed face first into the padded wall after just missing the catch and fell backward to the ground, hitting his head.

Pirela tried sitting up but went onto his back. Lagares scored standing up.

With manager Joe Girardi looking on, a Yankees trainer examined Pirela for several minutes. Pirela was able to walk and was helped into a golf cart.

Pirela, who complained of dizziness, was taken by ambulance from the complex to Tradition Medical Center, where a brain CT scan and a cervical MRI both came back negative and he was released from the hosptial. But he does have a concussion, the Yankees tweeted. He will be out an indefinite period.

Sabathia was frustrated with his outing on a sunny day in the mid-80s. He allowed five hits and four runs in 2-2/3 innings.

''Two-seamers were up. The ball David Wright hit was up, Lagares, Duda - they were just fastballs up and put good swings on them,'' said Sabathia, who made just eight starts last year in a season shortened by knee surgery on July 23.

Girardi said the time off could be affecting his left-hander.

''I think sometimes we forget that CC didn't pitch much last year. For him, it's getting back the consistency and work. He's always thrived on work,'' Girardi said. ''He feels great and there's a lot of life to his arm. I'm still encouraged. Don't worry about the numbers. He needs to pitch; he hasn't pitched a lot in the last 20 months or whatever.''

BACK TO THE MINORS

Yankees DH-3B Alex Rodriguez and RF Carlos Beltran (elbow surgery) didn't make the trip. They played in minor league games against Toronto prospects. A-Rod played five innings at third base without a play and had two singles in five at-bats for Double-A Trenton.

Rodriguez will DH in a minor league game Monday.

Beltran was the DH for Triple-A Scranton/Wilkes-Barre and went 2 for 4 with a double that the left fielder misplayed. He will play in the field Monday.

Yankees: Sabathia struck out four. He added there were quality moments, saying, ''I was throwing the ball in to righties a lot better. I just need to keep working and getting better. It's more about getting my command together and hitting my spots.''

Mets: Harvey faced just 18 batters. In four starts and 14 1-3 innings, he has allowed 11 hits and two runs while striking out 12 and walking one.

Mets: RHP Bobby Parnell said he felt soreness after making his first appearance since Tommy John surgery last April, but it was ''a good sore'' of muscles he had not used in a while. Parnell, slated as the team's closer last season, tossed 20 pitches on the minor-league side on Saturday, recording two groundball outs. Parnell said he will pitch again Wednesday. ... RHP Vic Black (shoulder) will throw on flat ground Monday after letting the anti-inflammatory medication clear from his system. ''I feel impatient,'' said Black, who had an MRI for shoulder weakness nine day ago.

Lowe, Snell Pace Rays in Game 2 Win
Two home runs and nine strikeouts helped even the World Series at 1-1 on Wednesday. Here's how.
10 hours ago

World Series Top Plays: Game 2
Check out the top plays from Wednesday night's Dodgers-Rays matchup, as Tampa Bay got right back into the 2020 World Series.
14 hours ago

Special Delivery
Clayton Kershaw's postseason reputation may precede him, but the Dodgers star is setting the stage to flip the script.
20 hours ago