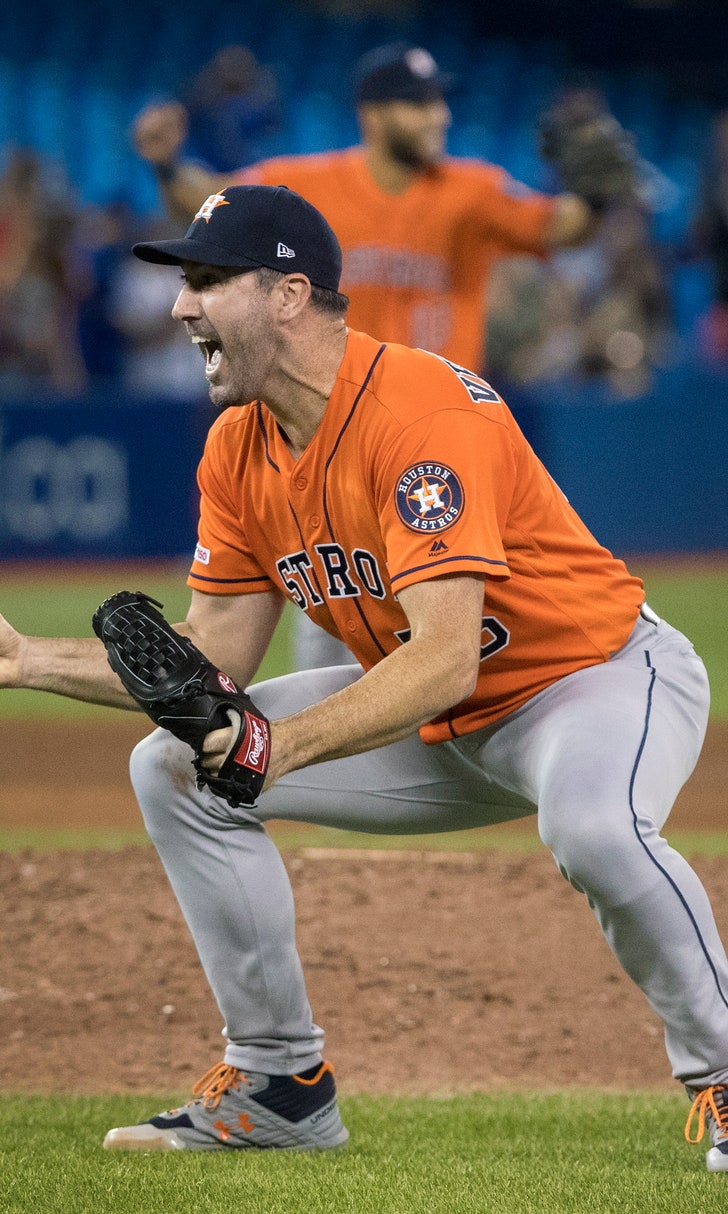 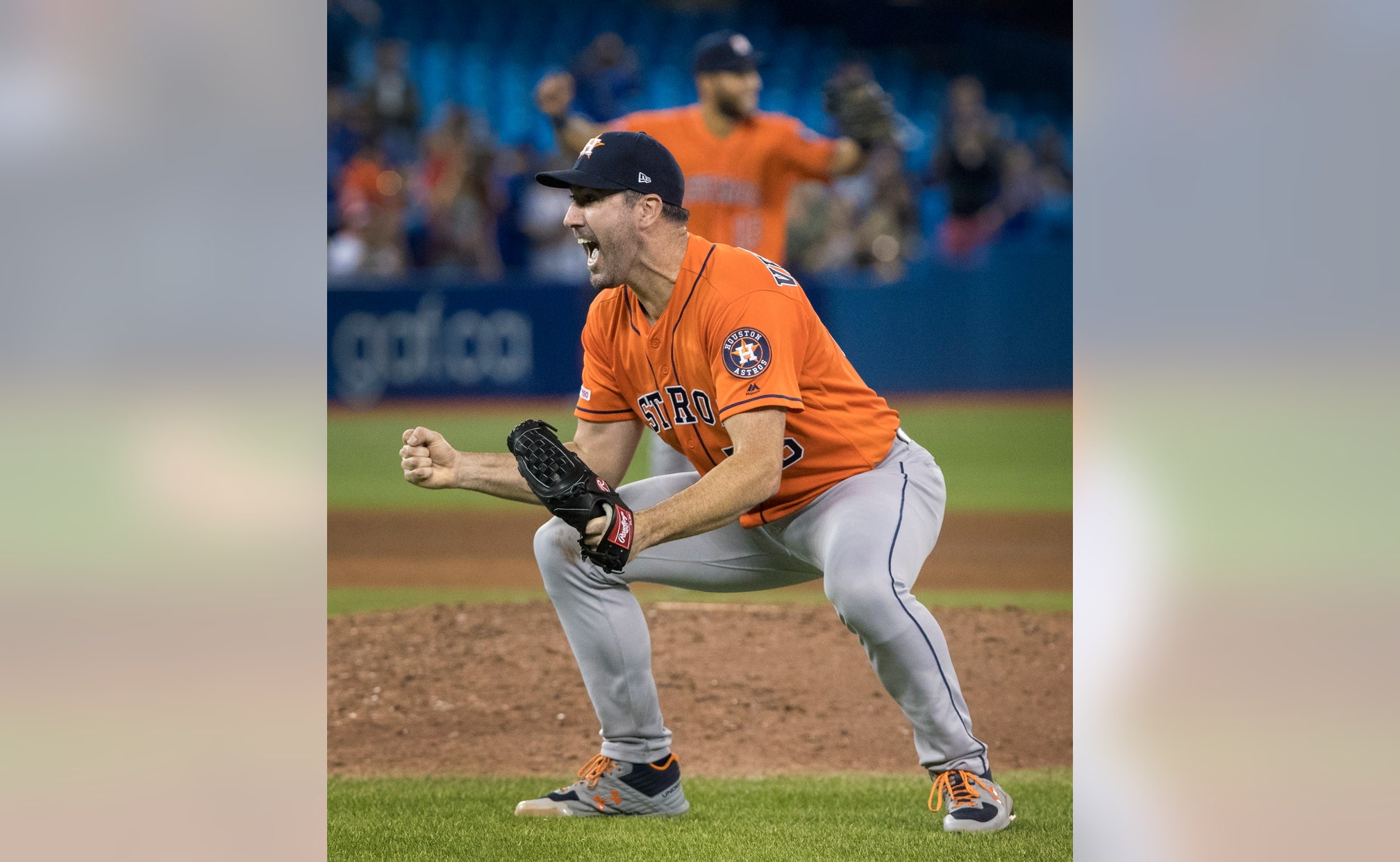 TORONTO (AP) — Justin Verlander pitched his third career no-hitter, punctuating a dominant season with an overpowering performance to lead the Houston Astros past the Toronto Blue Jays 2-0 on Sunday.

Verlander struck out 14 and allowed just one runner, walking Cavan Biggio with one out in the first inning.

Verlander also became the first pitcher to throw two no-hitters as a visitor in the same park — he also threw one at Rogers Centre in 2011 with Detroit. His other no-no was in 2007 for the Tigers against Milwaukee.

Verlander threw a season-high 120 pitches, mixing a fastball that reached the upper 90s mph with a sharp curve.

Verlander retired the last 26 hitters in a row. But the game was scoreless going into the last inning — according to baseball rules, Verlander needed to pitch a complete game to get credit for a no-hitter.

That's when Canadian-born rookie Abraham Toro stepped up for the AL West leaders. The Astros newcomer hit a two-out, two-run homer in the ninth inning off Ken Giles (2-3) that cleared the way for Verlander to complete the no-hitter.

Brad Miller hit a solo homer and a double for the Phillies, who pulled within 2½ games of the Chicago Cubs for the second NL wild card.

Pete Alonso hit his 43rd homer and Wilson Ramos extended his hitting streak to 25 consecutive games with a fourth-inning double for the Mets, who are four games behind the Cubs.

Daniel Zamora (0-1), who was just recalled from the minors, took the loss.

Hector Neris (3-5) got the final five outs for Philadelphia.

Gardner led off the ninth with a shot to right off Hendriks (4-2) and Ford followed with his 10th homer into the Yankees bullpen in right-center.

The Twins increased their lead in the AL Central to 5 ½ games over Cleveland.

Detroit has lost seven of eight and still needs four wins at Comerica Park to avoid becoming the first big league team to lose 60 games at home in a season.

Michael Pineda (11-5) got the win, giving up two runs on five hits and a walk in six innings. He struck out nine.

ST. PETERSBURG, Fla. (AP) — Carlos Carrasco made his return to the mound from leukemia Sunday and the Cleveland pitcher was applauded by both teams in a touching scene Tampa Bay victory.

The right-hander entered in the seventh inning for his first major league appearance since being diagnosed with a treatable form of leukemia in June.

Charlie Morton earned his 14th win and Travis d'Arnaud had two RBIs off the bench as Tampa Bay swept a critical series between postseason contenders.

Nate Lowe hit a two-run homer for the Rays, who moved a half-game ahead of Cleveland for the top AL wild card. Indians starter Adam Plutko (6-4) allowed four runs and six hits in 4 1/3 innings.

WASHINGTON (AP) — Ryan Zimmerman celebrated his return from the injured list with one of Washington's four home runs and the Nationals completed a series sweep of Miami.

Zimmerman, who was reinstated Sunday after missing 36 games with Plantar Fasciitis in his right foot, connected for a two-run shot. Juan Soto and Anthony Rendon each homered for the second consecutive game for Washington, while Yan Gomes also had a home run.

Rendon set a new Nationals (2005-present) single-season record for RBIs with 111. Vladimir Guerrero holds the franchise record of 131 set in 1999 when the team was in Montreal.

Washington, the NL wild card leader, has won four straight and nine of 10.

With the 4-3 win in the first game and the Chicago Cubs' 4-0 loss to Milwaukee, the Cardinals gained a half game in the NL Central to increase their division lead to three games. St. Louis has only lost two of its past 11 games and is 12-3 in its past 15.

Castillo (14-5) lasted six innings, giving up three runs and five hits with three walks. He struck out eight as the Reds' pitchers had 11 in the game.

The Cardinals Andrew Knizer hit his second homer of the season, a two-run shot that was part of a three-run third for St. Louis. Kolten Wong had three hits, including a triple, and an RBI.

In the first game, Harrison Bader continued his hit parade with a game-ending single to lift the Cardinals to the win.

Bader, facing five infielders with no one out, lofted a fly ball off Michael Lorenzen (0-4) to deep right field to bring in pinch-runner Tyler O'Neill.

Eugenio Suarez homered for the Reds.

Carlos Martinez (4-2) picked up the victory by striking out the side in the ninth on 13 pitches.

Meibrys Viloria drove in the go-ahead run for the Royals with a two-out single in the seventh inning. Kansas City took two of three in a series.

Mondesi led off the seventh with his third hit and stole second. With two outs, Alex Gordon drove him in with a tying double, and Gordon scored on Viloria's single to make it 5-4.

Whit Merrifield added a solo homer in the eighth.

Kevin McCarthy (3-2) tossed 1 2/3 scoreless innings of relief for the win. Ian Kennedy pitched a perfect ninth for his 25th save in 28 chances.

CHICAGO (AP) — Christian Yelich hit a three-run homer off Craig Kimbrel in the ninth inning, and Milwaukee shut out Chicago for the second straight game.

Milwaukee took two of three in the weekend series to pull within three games of Chicago for the second NL wild card.

The Cubs left nine runners on base and went 0 for 10 with runners in scoring position.

Seager sealed the victory with a three-run homer in the eighth inning.

Kikuchi allowed three runs in five innings. He has exceeded five innings in only one of his last six starts.

DENVER (AP) — Steven Brault hit his first major league homer and pitched effectively into the seventh inning to lead Pittsburgh over Colorado for a four-game sweep.

Adam Frazier homered on the first pitch of the game, the second straight day the Pirates did that.

Brault (4-3) allowed only one hit until Nolan Arenado lined a two-out fastball into the seats in left field in the sixth for his 35th home run. Brault left in the seventh when the Rockies got a run on two hits and an error, but Richard Rodriguez got out of the jam by fanning Trevor Story.

Brault socked a solo homer that made it 3-1 in the top of the seventh. He allowed just one earned run and four hits in 6 1/3 innings.

Josh Bell and Colin Moran each hit an RBI single for the Pirates. Bryan Reynolds had three hits.

Sandoval grounded out as a pinch-hitter in what could be his final game with the Giants. The 33-year-old former World Series MVP was activated off the injured list earlier in the day for a final at-bat under retiring manager Bruce Bochy.

Sandoval will undergo season-ending surgery on his right elbow Wednesday.

Eric Hosmer doubled, singled and tripled in his first three at-bats for San Diego. With a chance at the cycle, he walked in the seventh inning and struck out in the ninth.

Eric Lauer (8-8) beat the Giants for the third time this season. He struck out nine and allowed four runs in six innings.

ANAHEIM, Calif. (AP) — Xander Bogaerts had three hits, including a homer, and three RBIs as the Boston beat Los Angeles.

J.D. Martinez also went deep for the Red Sox, who went 6-2 on the trip and have won 11 of their last 15 to get within five games of the second AL wild card.

Albert Pujols had an RBI double in the third inning for his 3,185th career hit, passing Cal Ripken Jr. for 14th place. Justin Upton homered in the eighth.

Bogaerts and Martinez went back-to-back in the third.

Ryan Weber (2-2), the third of six Boston pitchers, gave up one hit and a walk in two innings to get the win.

PHOENIX (AP) — Cody Bellinger hit a tying homer in the ninth inning, pinch-hitter Joc Pederson went deep in the 11th and Los Angeles prevented a four-game sweep with a win over Arizona.

In a frightening scene, Dodgers reliever Dustin May was hit in the head by a line drive and stayed down for a few anxious moments in the middle of a hushed ballpark. But the pitcher ultimately stood up, was checked by a trainer and walked off the field without help.

Pederson led off the 11th and sent a full-count pitch from Taylor Clarke (4-5) high into the right field seats for his 28th home run. Bellinger's 43rd of the year came with one out in the ninth off Andrew Chafin.

Pedro Baez got three outs for his first save of the season.

ATLANTA (AP) — Freddie Freeman homered twice off All-Star Lucas Giolito and drove in five runs, providing all the offense for Atlanta against Chicago.

The White Sox have lost six in a row.